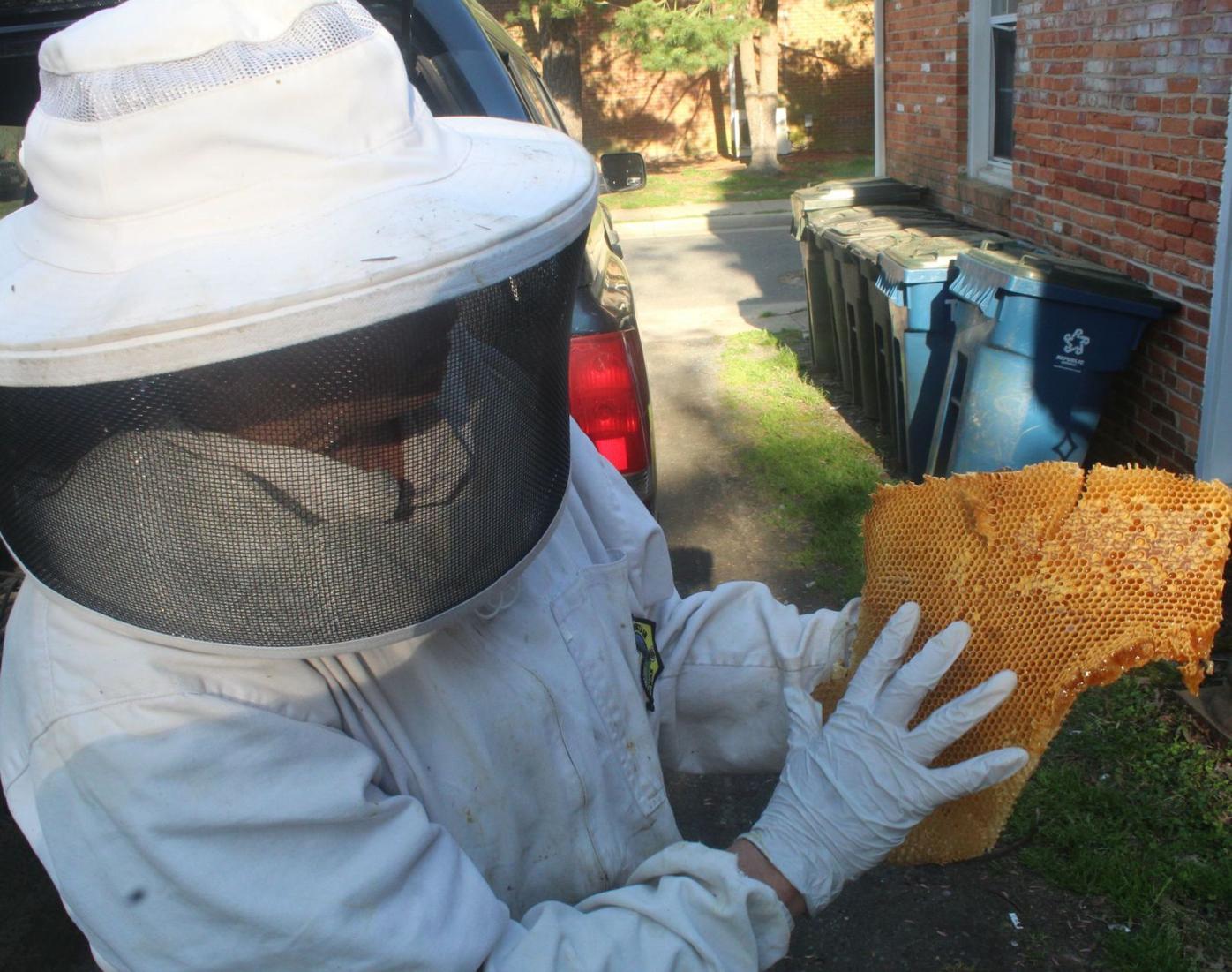 Anna Wysocki shows a piece of the honeybee hive on April 20. 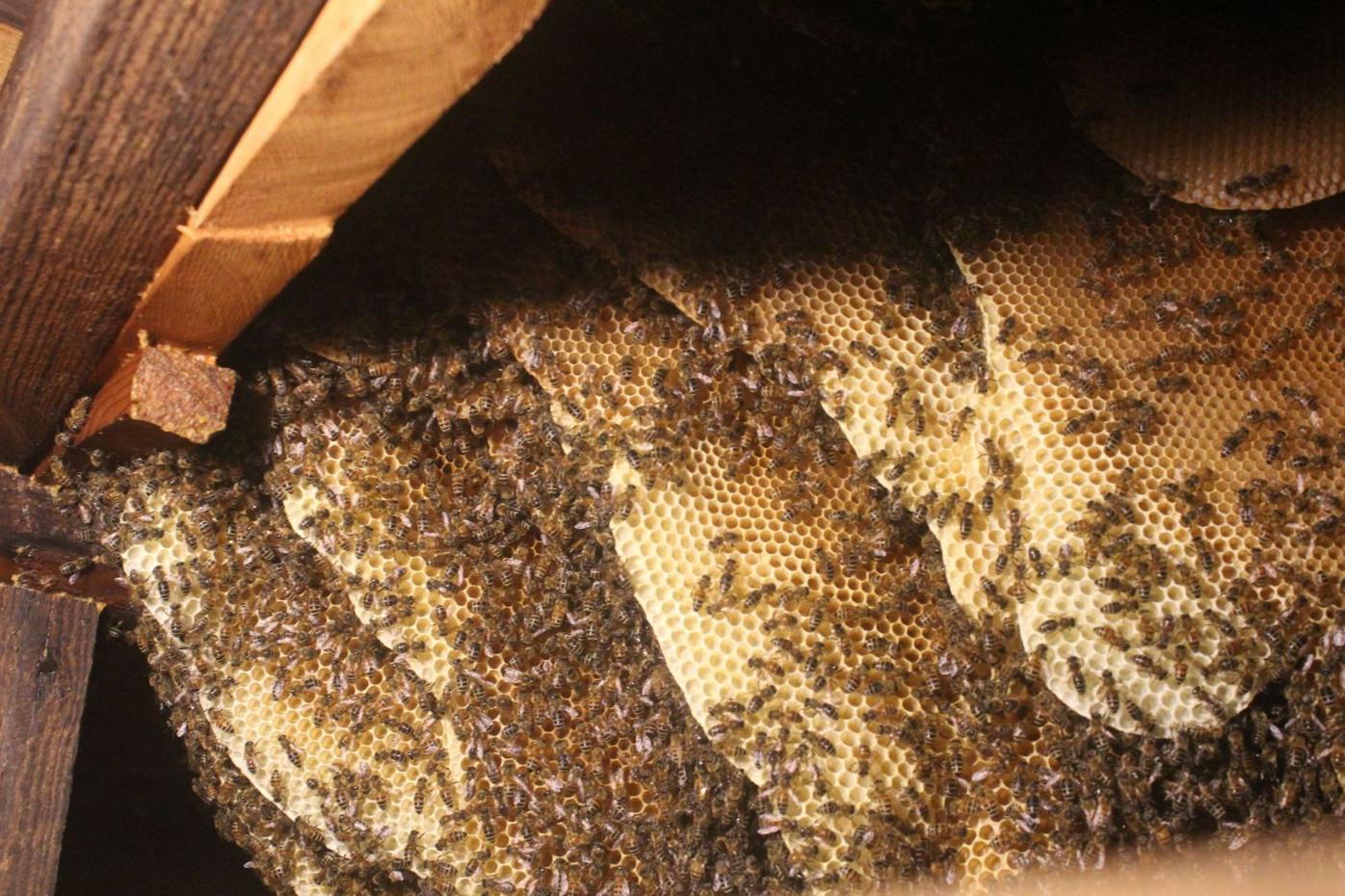 The honeybee hive inside an old brick building acquired by the Chesapeake Multicultural Resource Center is home to 15,000 bees. 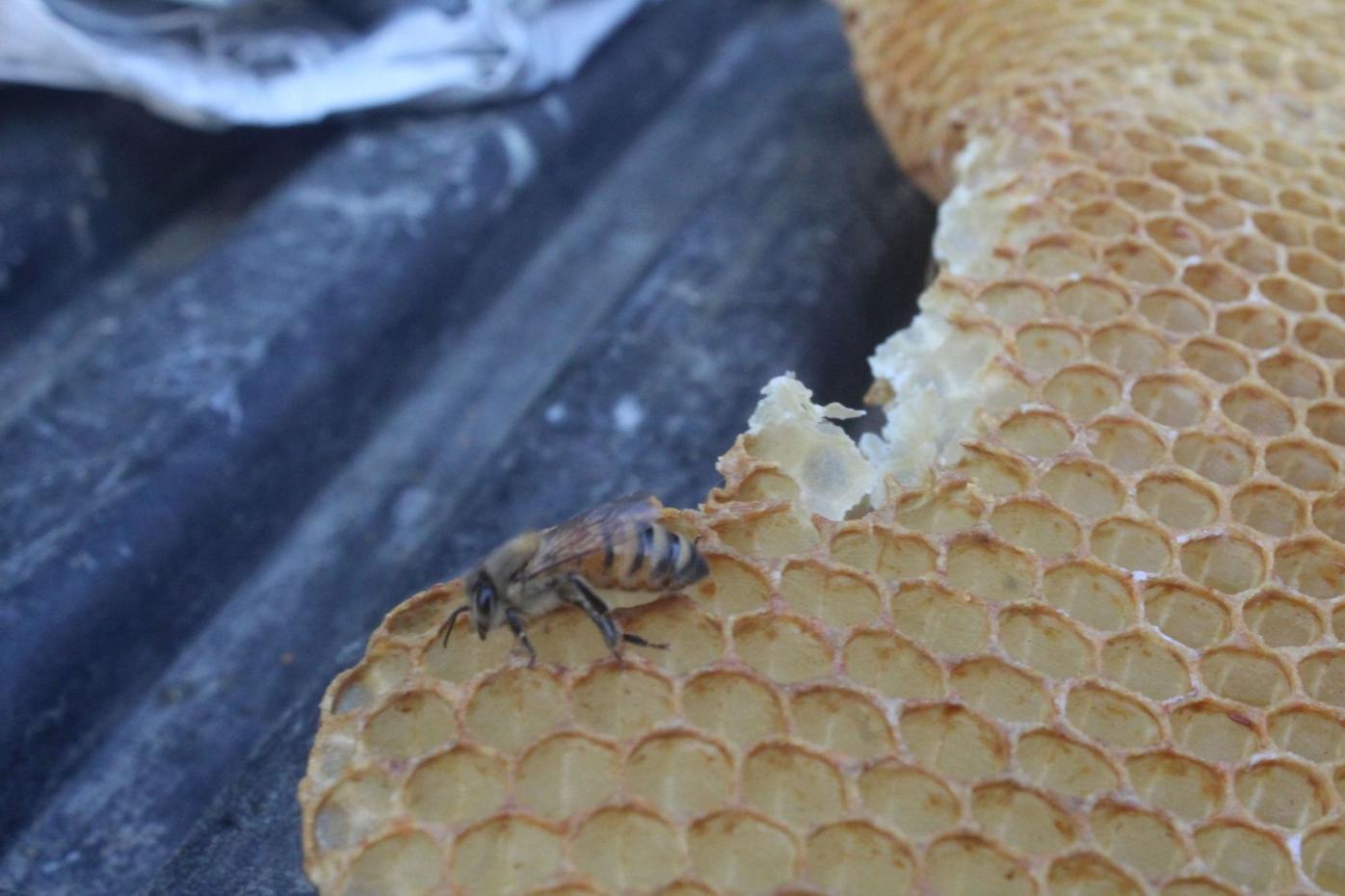 A honeybee rests on a piece of its hive. Anna and Paul Wysocki of Talbot Apiary are relocating the hive to a new home in Cordova. 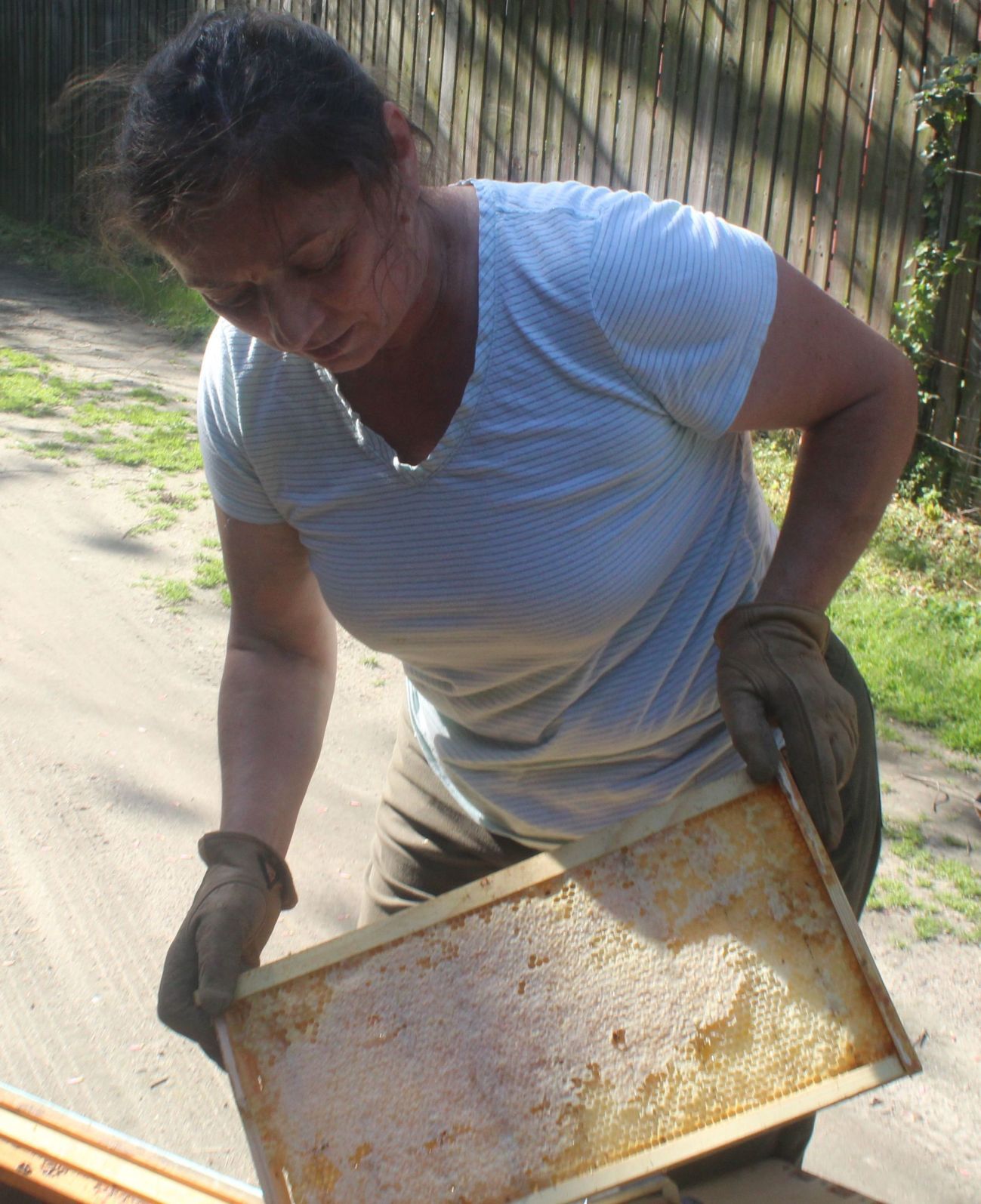 Anna Wysocki inspects a bee box frame. The honeycomb hive will be stored inside the bee box. 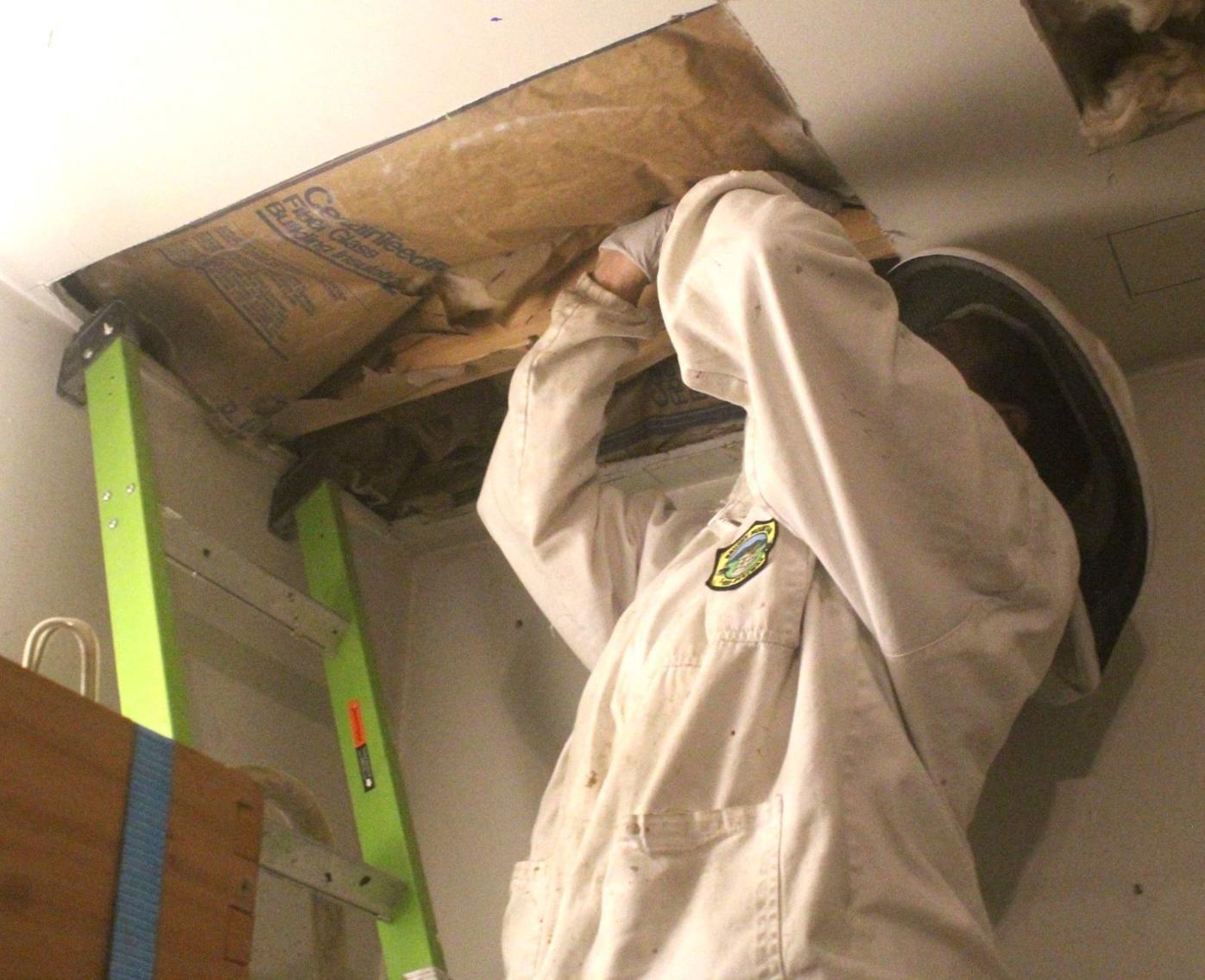 Anna Wysocki removes plaster from the ceiling of an old brick building. Inside is a bee colony. 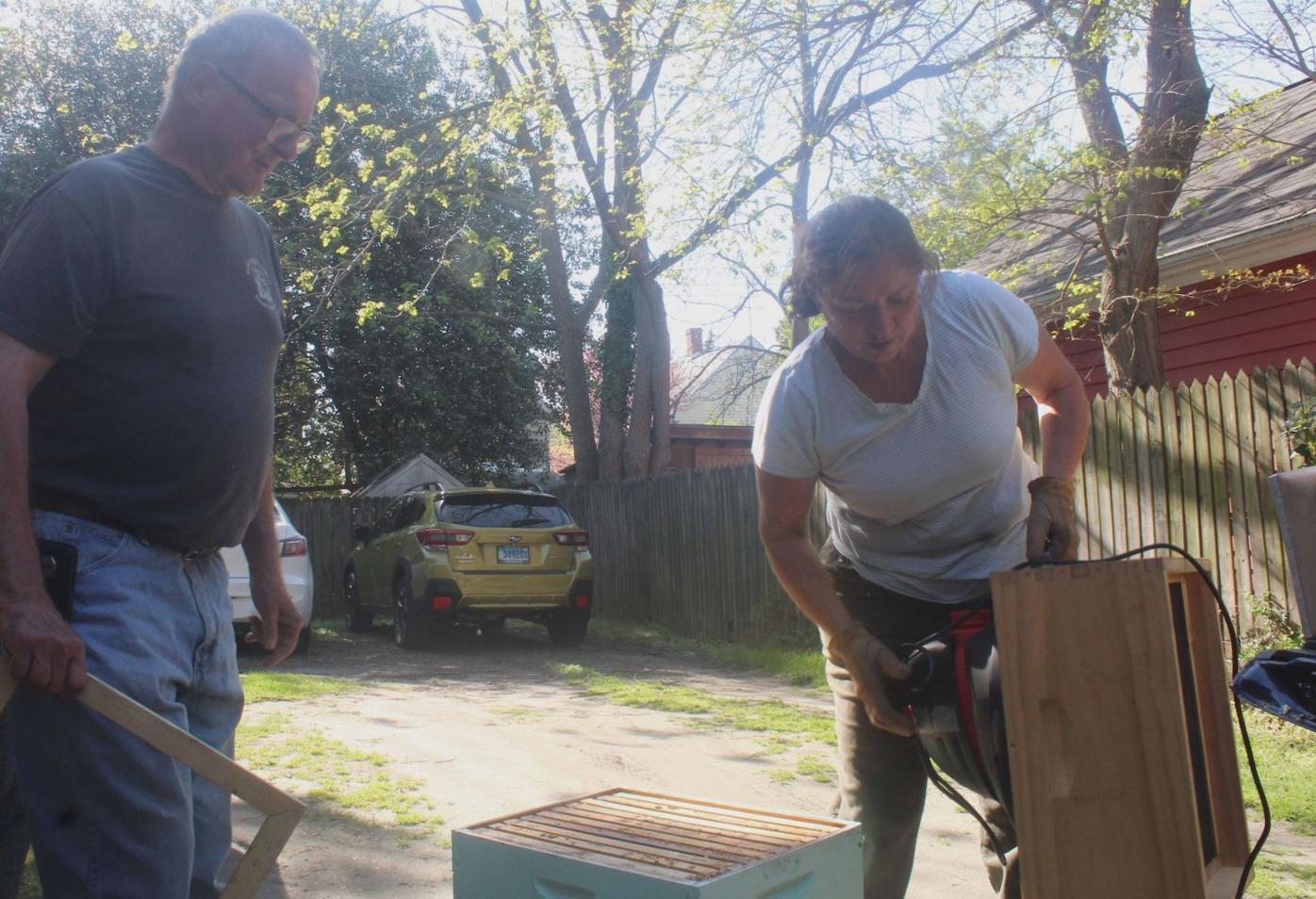 Paul and Anna Wysocki prepare a bee box. The box will be the new home for a colony of bees that were living inside an old brick building off Dover Street.

Anna Wysocki shows a piece of the honeybee hive on April 20.

The honeybee hive inside an old brick building acquired by the Chesapeake Multicultural Resource Center is home to 15,000 bees.

A honeybee rests on a piece of its hive. Anna and Paul Wysocki of Talbot Apiary are relocating the hive to a new home in Cordova.

Anna Wysocki inspects a bee box frame. The honeycomb hive will be stored inside the bee box.

Anna Wysocki removes plaster from the ceiling of an old brick building. Inside is a bee colony.

Paul and Anna Wysocki prepare a bee box. The box will be the new home for a colony of bees that were living inside an old brick building off Dover Street.

EASTON — The saviors of the beehive arrived in full gear: white beekeeper suits, bee boxes and power equipment. Paul and Anna Wysocki backed their van up outside the old brick building at 331 East Dover Street and prepared to relocate what they called one of the most “gorgeous” beehives they had ever seen.

But there was one problem: the beehive was deep inside the building’s roof, tucked into the ceiling of the old place and protected by layers of drywall. Fortunately, the beekeepers had a plan.

After prepping the bee box where the honeybees will soon live, Anna slipped on gloves and donned her beekeeper suit, pulling the netting over her head.

Determined, she marched inside the building and into a dimly lit and dusty room, which she had been prepping with her husband for three days. Frequent days of planning all led up to this eventful day, when the bees would be safely removed and relocated to a new home at a meadow in Cordova.

Little honeybees buzzed about in swarms as Anna crept in. But the bees were calm, flitting around a dangling lamp in the middle of the room as Anna pushed a ladder up against the plaster ceiling and drilled out a chunk of drywall. She tore it off and chucked it to the ground, exposing a large hive that 15,000 honeybees call home.

The immense size of the hive surprised both Anna and Paul, who have been doing relocations like this for the past 10 years with their business Talbot Apiary, based in Cordova. They originally called the hive “good-sized.”

“I changed my mind,” said Anna. “This is gorgeous.”

Anna and Paul marveled at the hive. Anna stepped down from the ladder and looked up at the golden-colored honeycomb nest, which stretched across an entire wall. The hive was deep inside the ceiling, but the honey lightly dripping off the combs shone brightly in the dark.

“How could anyone see this ... “ said Anna, and she stopped, shaking her head, questioning why people only think about bees when they get stung.

Anna spent the next hour or so sucking the bees up into the bee box with a vacuum tube that safely deposits the honeybees inside.

“There’s a ramp that they go against, and we carefully adjust the amount of vacuum so that it’s not a violent process,” Paul said as he watched her work. “It’s just enough to pull them in.”

When all is said and done, the new bees will be living near the property of a friend of the Wysockis. After relocation, some bee boxes stay at the meadow near the friend’s home, while other colonies live directly outside the Wysocki’s house in Cordova.

“The easiest part is removing them,” said Anna. “Keeping them alive, that’s one thing. So after this, there’s lots of caretaking.”

While Anna is confident she can provide “perfect conditions” for the bees, the colony actually had a pretty good home inside the old brick building. When Anna and Paul were contacted to relocate the hive, they had pressed the owner, Matthew Peters of the Chesapeake Multicultural Resource Center, to let them stay.

But Peters began moving into the building last year. It’s connected to ChesMRC’s main hub, and the executive director of the nonprofit immigration advocacy organization hopes to create an educational center inside the building.

For the most part, children will be working inside the educational center, so sharing the space with a massive colony of honeybees could cause some liability issues.

“We’re gonna have all this connected, so we don’t want bees flying around here,” Peters said. “It’s not conducive. We just opened this, so it adds to the urgency of getting rid of the bees.”

Peters did not want to contact an exterminator, and he remembered that Talbot County has a number of beekeepers and rescuers. He learned about Talbot Apiary through mutual sources.

“They’re pretty well-known people,” he said of Anna and Paul Wysocki. “We’re just happy they’re out here today to save this colony.”

And the Wysockis are grateful that Peters refrained from contacting an exterminator, which would have been cheaper. In that event, the bees would have all died.

Now they have a good home, which Paul said is an important part of Talbot Apiary’s mission. Usually, he and Anna remove beehives and colonies from at-risk locations — far up in trees.

“The honeybees are in such chaos now because they’re being attacked in so many different directions,” he said. “There are viruses, parasites, pesticides from farms. Most of the hives we catch wouldn’t make it through the next winter.”

The Maryland Department of Natural Resources says honeybees “both in the wild and in colonies are dying at unprecedented rates due to Colony Collapse Disorder,” a result of pesticides, disease, malnutrition, and the constant threat of winter cold.

Researchers at the Human And Ecological Risk Assessment reported in 2014 that there is a significant decline in the population.

“Prior to 2006, annual average ‘expected’ losses in the United States were approximately 15%, but since then, U.S. beekeepers have been reporting losses (overwintering mortality) of about 30%,” researchers wrote.

But they mentioned that beekeepers are preventing drastic losses and are saving the bees nationwide by relocating and caring for them.

Saving the honeybees is crucial not only for the cycle of nature but also for the economy. According to a 2014 report from The White House, 87 of the 115 most important crops in the U.S. are dependent on animal pollinators such as honeybees, which transfer pollen between flowers, crucial for fruit and seed production. That leads to a $24 billion impact, and honeybees account for $15 billion of that.

“The problem is serious and poses a significant challenge that needs to be addressed to ensure the sustainability of our food production systems, avoid additional economic impacts on the agricultural sector, and protect the health of the environment,” The White House reported.

Honeybees are still among the most common type of bee in Maryland, a state home to 400 species of bees broken into five families. Honeybees belong to the common Apidae family along with bumblebees.

Waving goodbye to the honeybees when Anna and Paul arrived was the colony’s neighbors and friends over at Domino’s, just across the street from the old brick building.

Ashley Whiting, the general manager, said she’s worked at Domino’s for several years and the honeybee colony has been a friendly neighbor for the last four years.

“They’re taking my bees,” she said when the beekeepers arrived. She frowned as they rolled out equipment from the back of the van.

While the hive is inside the building, swarms of bees can be seen buzzing around the outside of the home. To Domino’s employees, it’s calming to see the bugs at work.

“I’ve been watching them” for four years, Whiting said. “They’re just cool to look at and watch.”

It was a beneficial, mutual relationship between Domino’s workers and the honeybees. For the past four years, the employees got to enjoy the honeybees’s presence, while in the winter, the pizza store was a home away from home for the critters (or, at least, a home across the street).

“They come in the store when it’s cold outside,” Whiting said. Sometimes, the workers would end up “trapping them and taking them back over, trying to warm them up.”

Whiting said the bees will be missed.

“I’m happy that they’re going to a better place,” she said. “Their population is very important. I was afraid when the building got sold ... that they were going to come in and exterminate them. So I’m happy they’re getting relocated instead.”

After the honeybees were distributed safely inside the bee box, Anna cut the honeycomb hive into chunks, organizing their new home exactly like the colony itself. Worker beers were separated from the nurse bees and the brood, or the eggs.

“I have to take the brood and put that in this frame,” she said. “I’ll be cutting the chunks of brood and gently putting them in the frame, securing them together with the nurse bees, and the nurse bees will be taking care of them.”

Anna said that by doing this, she would be “saving” the colony — giving it an opportunity to reproduce and thrive.

“That’s the important part,” she said, as the last of the bees were distributed into their new home. “To save the colony.”