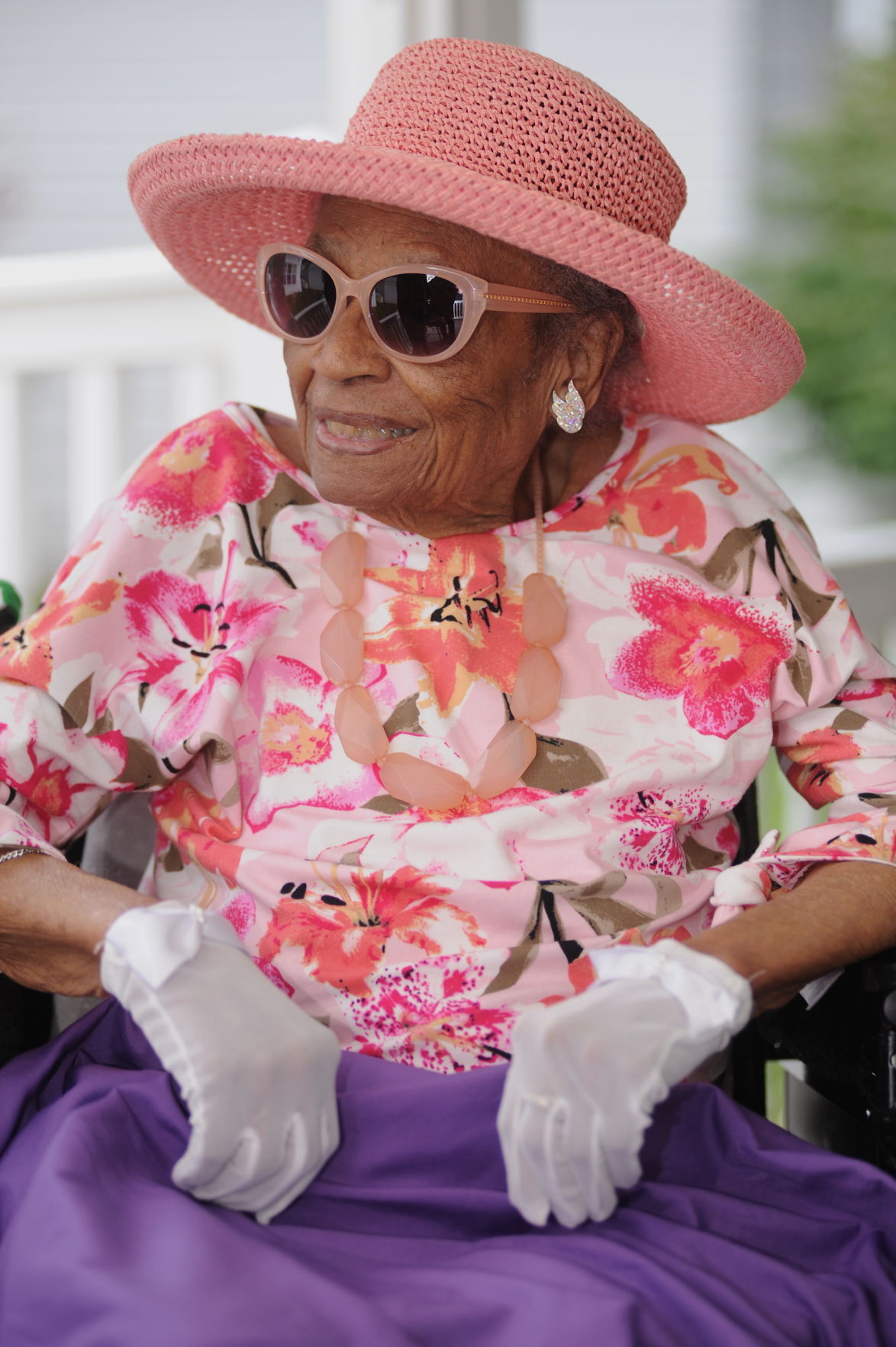 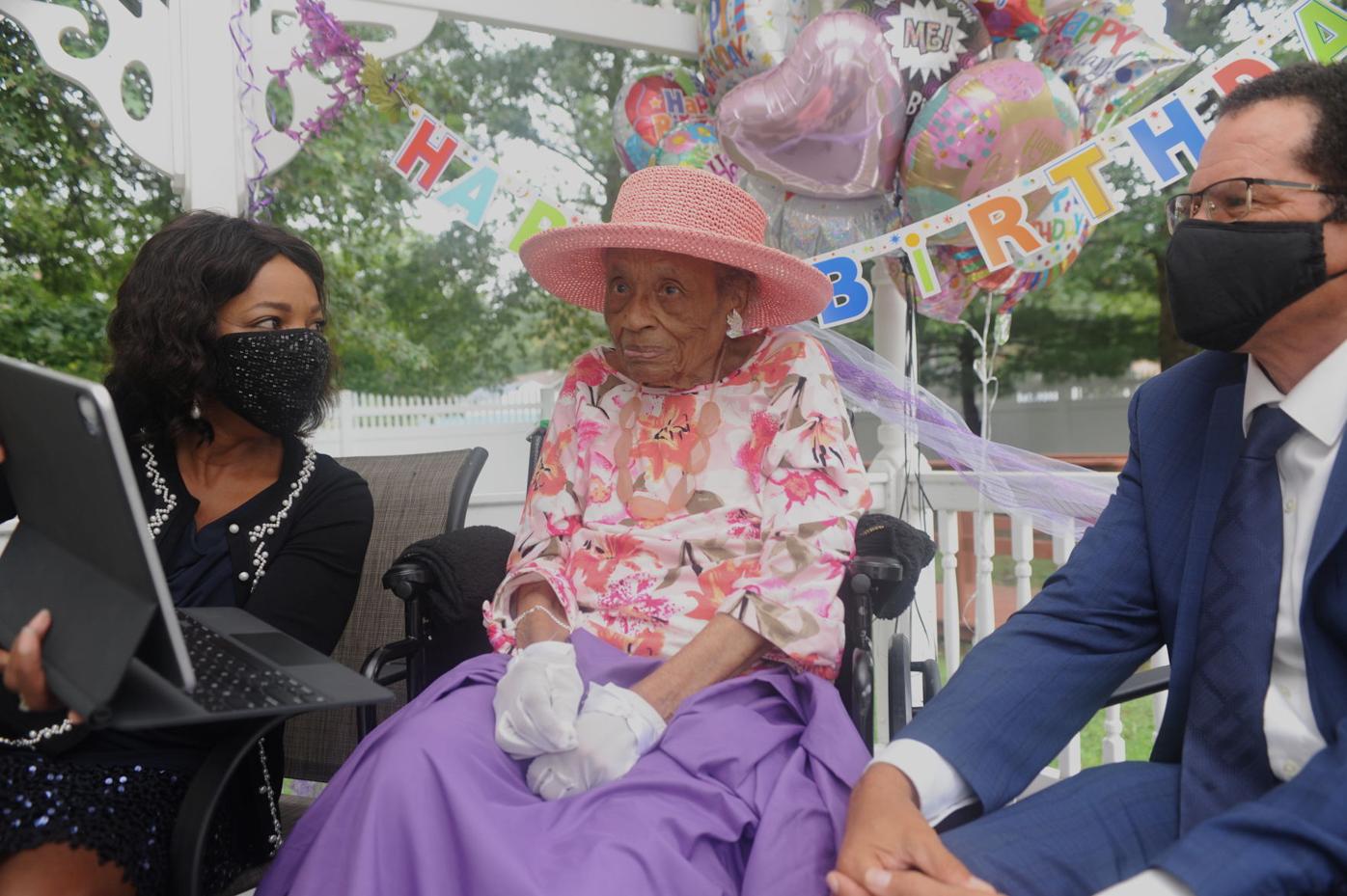 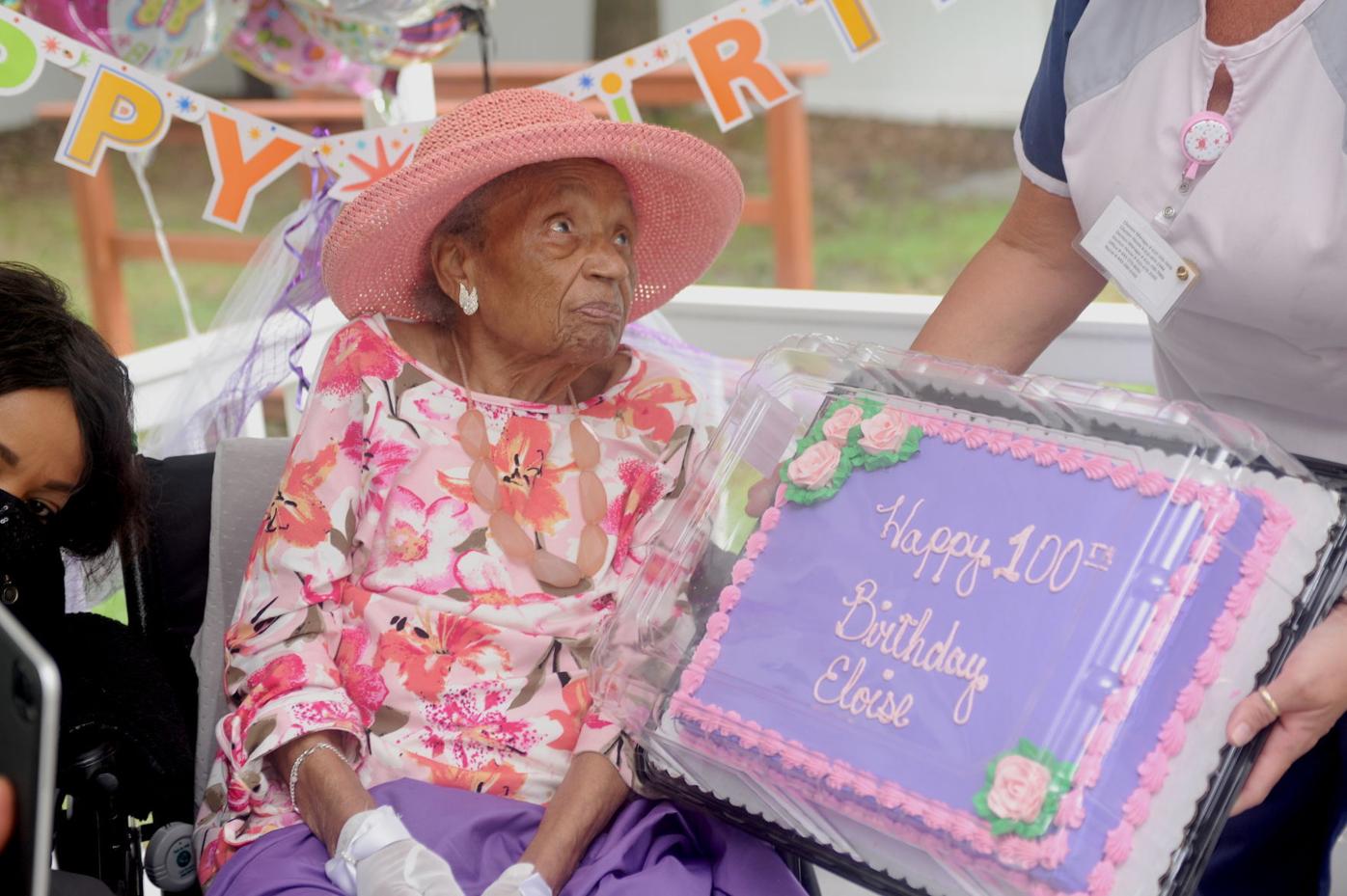 As the people on Zoom cheered, the cake was presented. There were no candles to blow out. 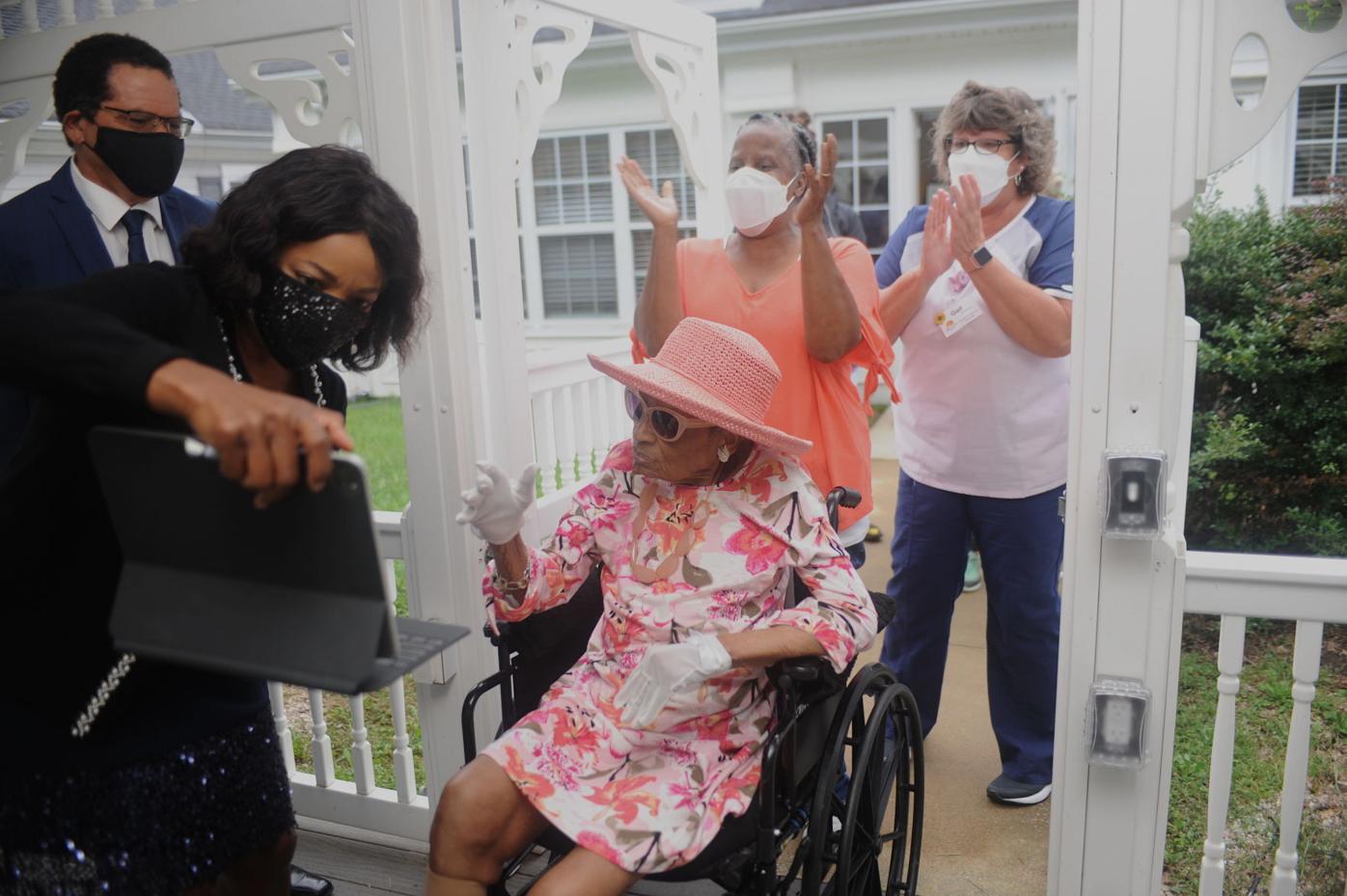 Staff from Arcadia Denton cheer as Eloise Alston makes her grand debut. Grace Stripling, to the left, holds laptop that is acting as a live feed for many of Alston’s relatives.

As the people on Zoom cheered, the cake was presented. There were no candles to blow out.

Staff from Arcadia Denton cheer as Eloise Alston makes her grand debut. Grace Stripling, to the left, holds laptop that is acting as a live feed for many of Alston’s relatives.

DENTON — Mrs Eloise Edwards Alston was born on Sept. 11, 1920, in Crawfordville, Georgia. One hundred years ago Woodrow Wilson was president. There have been 18 presidents since then.

These days, at the age of 100, she still enjoys visiting with family and friends, talking on the phone and taking an occasional trip.

She lives at Arcadia of Denton, a senior living facility with room for 16 residents. Being 100 and living in the time of COVID-19 there are some restrictions on what a birthday party can look like.

So, she was lucky to have a relative, Grace Stripling, to create a virtual party. Stripling organized 35 different Zoom users to log in. Stripling created two slideshows chronicling Alston’s life. She presented those shows to both Alston and all of the multi layers of family on Zoom — some from as far away as Atlanta. Even a representative from Savannah State University Zoomed in. Then each group had a chance to wish Alston a happy birthday. Blessings, air kisses and salutations came through the laptop. Alston mouthed “thank you” for all the Zoom well wishes.

Alston was not talking much on her birthday, but her eyes were smiling. She was tickled.

She came to the party decked out. She had pink shades on. She had on a matching pink straw hat, pink floral print dress, and she wore formal white gloves to finish the ensemble.

When it was time for the cake, Arcadia Denton brought out a purple and pink sheet cake. There were no candles to have to blow out.

There is a quiet dignity to Alston. She moves slowly. Her eyes are piercing in their kindness. By the end of the 45 minute party, she was tired. As she faded, so did the party. Cake eating could wait.

She had a long and active life.

After graduating from Murden High School in Crawfordville, she went on to attend Savannah State University. She majored in home economics, but did not finish her degree. After eight decades in 2018, at the age of 97 she received an Honorary Degree of Associate of Humane Letters from SSU.

After working for 38 years at the federal and city government service to the Bureau of Engraving, Department of Commerce, Census Bureau, DC Board of Election and Ethics and the Department of the Navy, she retired. However after retirement she wasn’t done. She became a volunteer at The Department of Public Works, Providence Hospital and even at the White House.

Mrs. Alston was an active member of The Vermont Avenue Baptist Choir for more than 75 years where she sang in the choir. She is a member of the ICUA, Local and National Ushers Association, the Lott Carey Baptist Foreign Mission. She has a lifetime membership in the YWCA and the NAACP. Mrs Alston joined Martha Chapter No. 11, Prince Hall Affiliate in DC in 1982.

Mrs. Alston is generous. She provided support to scholarship committees. She was passionate about providing educational opportunities for young people. Furthering her interest in supporting education, she has been a very active member of the District of Columbia chapter of the SSU Alumni Association. She is a lifetime member of the SSU National Alumni Association. She was the founder of the SSU Penny Fund which is used to provide students with funds to register and stay in school.

She is well known as a fundraiser too. She planned and organized activities to raise money for SSU. She has also made substantial contributions to SSU.

She is the last surviving member of her 11 siblings.