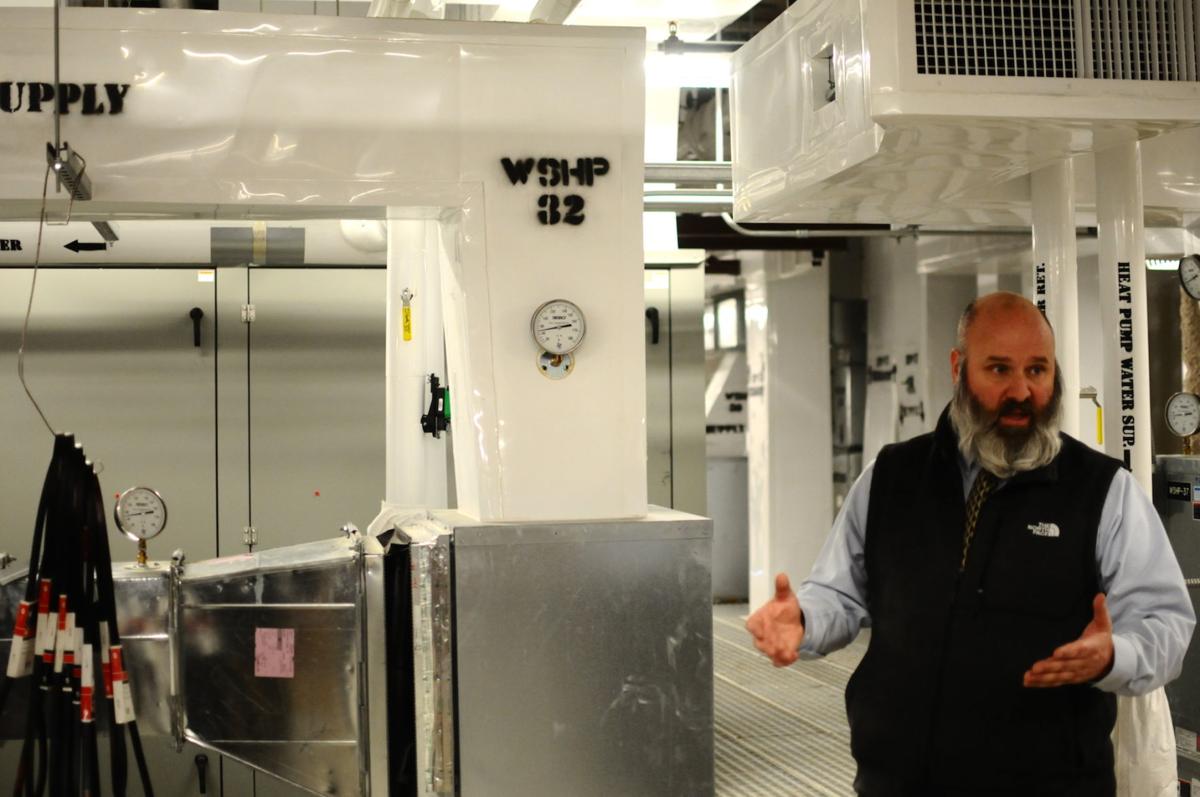 Paul Renshaw, director of facilities for Chesapeake College, shows off some of the internal infrastructure of the Health Professionals and Athletic Center that has made it more energy efficient. 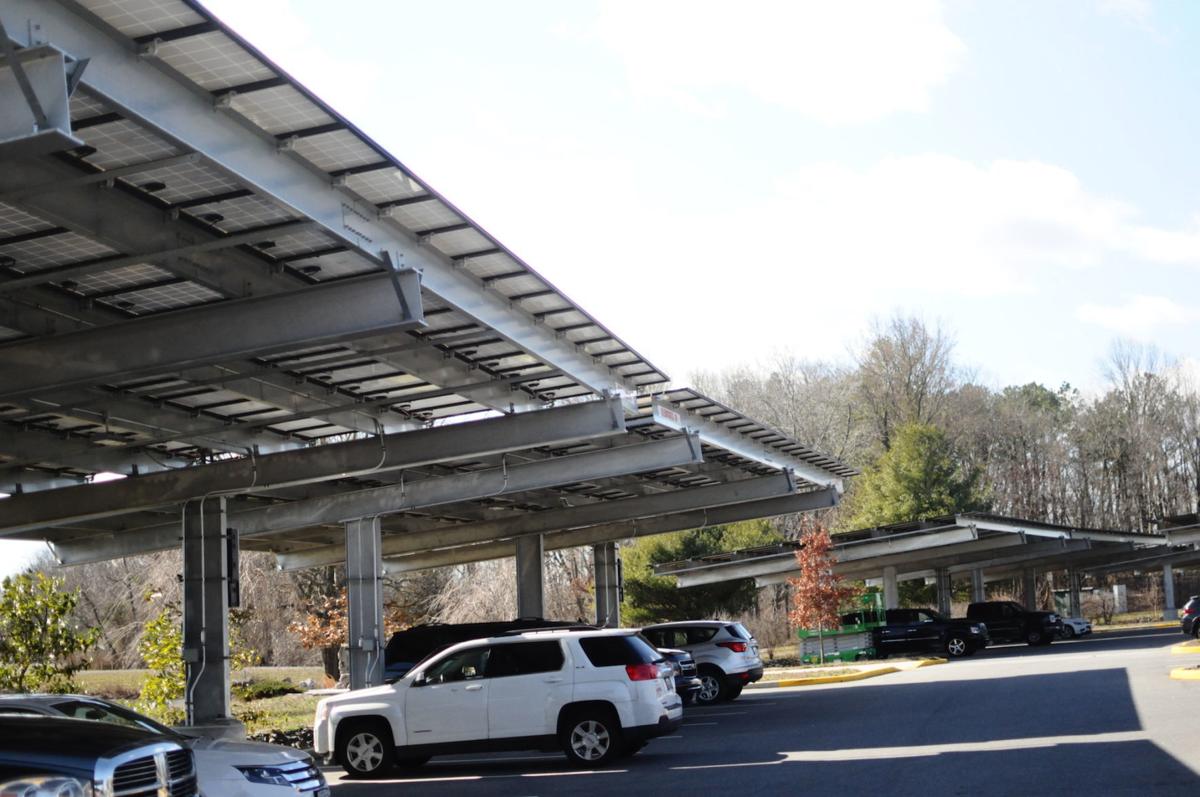 Among the additions to the campus was a 1.8 megawatt solar ground mount array and parking lot canopies. 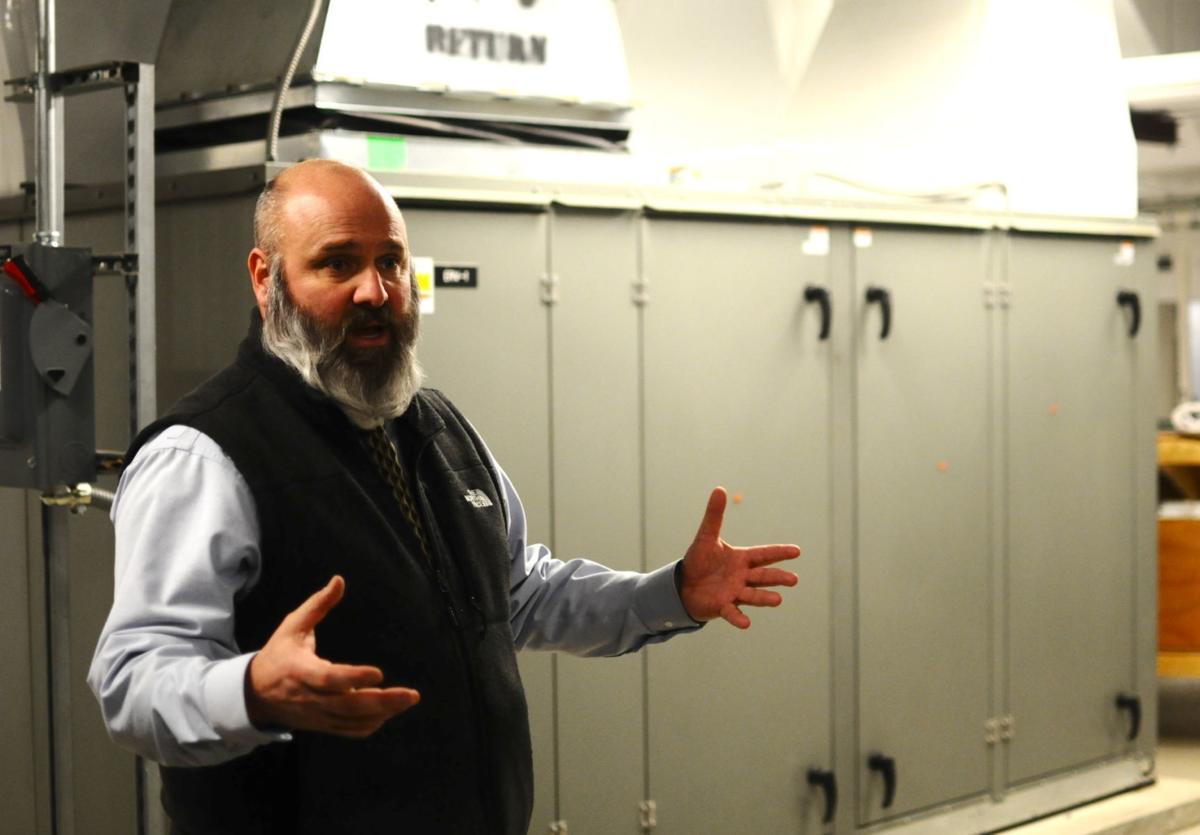 Paul Renshaw, director of facilities for Chesapeake College, shows off some of the internal infrastructure of the Health Professionals and Athletic Center that has made it more energy efficient.

Among the additions to the campus was a 1.8 megawatt solar ground mount array and parking lot canopies.

WYE MILLS — The Department of Energy honored Chesapeake College Thursday, Feb. 27, for its strides in energy efficiency as part of the Better Buildings Challenge through the use of solar panels and building improvements.

The Health Professionals and Athletic Center, originally built in the 1960s along with the original four buildings on campus, now encompasses 100,000 square feet. It houses the school’s athletic facilities and state-of-the-art simulation laboratories, a surgical theater, an ambulance simulator and a simulated apartment for EMS training.

“Our mission as a community college is to educate students in the five counties of the Upper Shore and part of that is using best practices in everything including energy efficiency,” said Tina Jones, vice president for Administrative Services at Chesapeake College. “Today’s tour shows how we integrate that throughout the campus. We’re also helping to lead the county, the state and the nation in this work. This is the first community college in the nation as a Better Buildings achiever.”

In 2014, the college began renovations to garner a Leadership in Energy and Environmental Design Silver rating per state law.

Minimizing the use of certain types of insulations directly contributes to the amount of electricity used to heat or cool the building. The structure uses 300-foot-deep geothermal wells operated on a building-wide water loop with each building zone having its own water source heat pump.

Fresh air for the building is provided through energy recovery ventilators with heat wheels that condition 100% of the outside air.

Baseline annual energy use for a building of that size is 180 kilo-British thermal units per square foot. In 2016, the HPAC used 89 kBtu per square foot. That represented a 51% energy savings. Annual baseline energy costs for the building was $161,000 with that sum reduced to just $83,000 in 2016.

“This is really about serving our students by passing the savings on energy usage to them by keeping our tuition down,” said Dr. Cliff Coppersmith, president of Chesapeake College. “We’re also just trying to be a responsible community member by providing resources to our local community. The things we’ve done here are so productive and innovative and ultimately served the public.”

The amount of electricity generated from the solar panels have even allowed the building to go off the electric grid entirely at some points in the day.

The $78,000 savings, along with the slate of improvements to the building earned it a promotion to a LEED Platinum certification in May 2017.

According to the Department of Energy, the college has reduced its energy usage by 24% since 2011, meeting its Better Building Challenge goal of 20% eight years ahead of schedule. Chesapeake College is on pace to achieve carbon neutrality by 2025.

DOE data notes energy costs at an estimated $200 billion a year in the U.S. to power the buildings where many work, shop and study, and another $200 billion for industrial energy use.

“This initiative is to find whose leading the way in energy efficiency in the nation,” said Maria Vargas, senior program advisor and the director of DOE’s Better Buildings Initiative. “We partner with those willing to be leaders by setting a 20% energy reduction goal across their entire portfolio. Chesapeake College is also sharing what they’re doing so other organizations can benefit.”

On average, 20% to 30% of this energy is wasted. By reducing that amount in buildings, the DOE states, the country’s power grid “saves energy and money, create good jobs, and avoid significant emissions of CO2.”

More information on the DOE Better Building Challenge and the impact of sustainable energy improvements is available at www.betterbuildingssolutioncen ter.energy.gov.