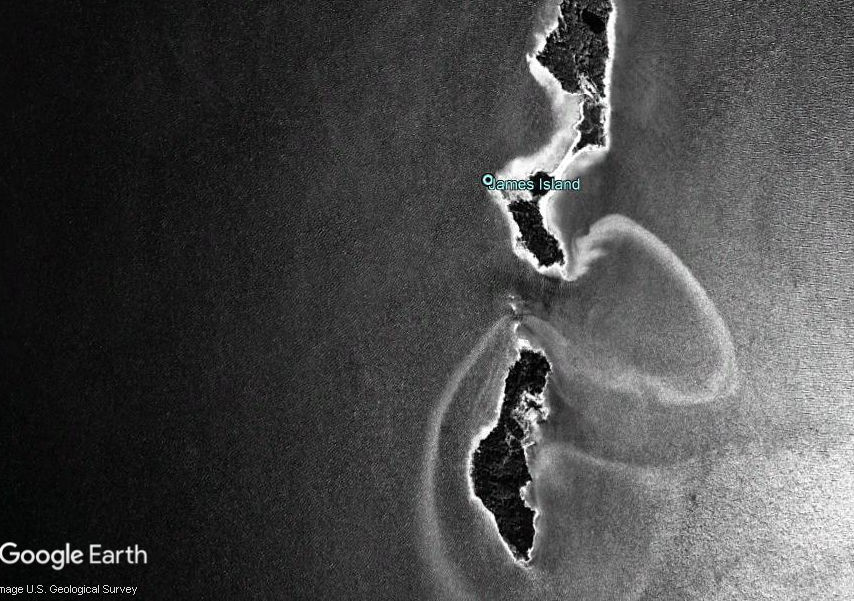 A 1994 Google Earth image of James Island, by then nearly separated into three fragments. 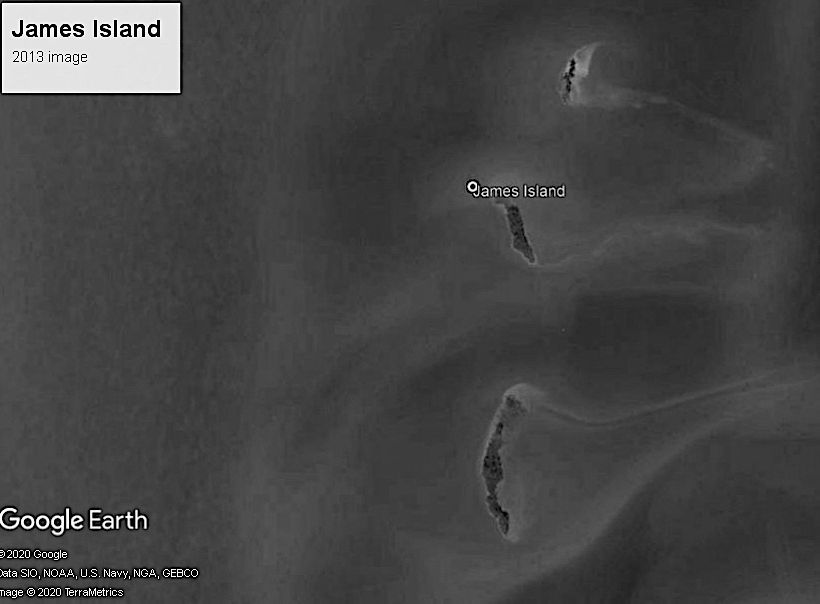 A 2013 Google Earth image of James Island. Nowadays, the southern fragment of the island itself breaks into four or five pieces.

A 1994 Google Earth image of James Island, by then nearly separated into three fragments.

A 2013 Google Earth image of James Island. Nowadays, the southern fragment of the island itself breaks into four or five pieces.

Over three decades, barges will unload the same amount of dredged material along the bottom of the Chesapeake Bay off the Eastern Shore as it would take to fill the U.S. Capitol Rotunda 2,000 times. Their work will transform the swiftly eroding James Island into a formidable storm barrier and wildlife realm, officials say.

Sound familiar? It’s the same playbook the Army Corps of Engineers and Maryland Port Administration have been using at nearby Poplar Island.

Poplar Island is growing by 2 million cubic yards a year in the Army Corps’ largest “beneficial use” of dredged material undertaken on the East Coast. The new terra firma is composed of muck sucked up from the bottom of Chesapeake Bay shipping lanes, which must be cleared of sediment every year to ensure safe passage for large vessels.

Poplar’s state and federal managers estimate the island will reach its 1,715-acre capacity by 2030 or 2031. In need of somewhere else to deposit the sediment, the agencies are turning to a location about a dozen miles to Poplar’s south.

After 20 years of planning, the next phase is set to make history again. The rebirth of James Island off Dorchester County, if all goes according to plan, officials say, will be on an even grander scale and shore up a second island, as well — Barren Island, a dozen miles south off Hoopers Island.

“This area of the Bay has some of the highest erosion rates,” said Ray Tracy, the Army Corps’ project manager.

The twin projects will help to improve the Bay ecosystem’s fragile health, engineers say, by reducing the amount of sediment that washes into nearby waters and enlarging nesting areas for rare and threatened bird species.

The Chesapeake Bay Foundation and other conservation groups have been complimentary of the Poplar restoration and are watching the James and Barren projects closely.

“We want to ensure the dredged material continues to be viewed as a resource for habitat restoration,” said Doug Myers, senior Maryland scientist for the Bay Foundation.

Already, hundreds of islands have been lost to storms, erosion and a changing climate across the United States’ largest estuary. Over the past 150 years, scientists estimate that the eastern side of the middle Bay alone has lost 10,500 acres of remote island habitat — places with no bridge connection to the mainland.

Many more islands remain threatened. Sea level has risen about 1 foot in the Chesapeake region over the past 100 years and could surge another 4 feet or more by the end of this century, climate scientists say.

Although only two remote islands remain inhabited — Tangier Island in Virginia and Smith Island in Maryland — scientists and environmentalists say a different kind of populace relies on their survival. Because of their secluded locations, the islands are magnets for migratory birds, such as ospreys, black skimmers, pelicans and bald eagles.

Like Poplar, James Island would be rebuilt using mud dredged from the approach channels leading to the Port of Baltimore and the Chesapeake and Delaware Canal. Officials say nature can benefit from the creation of dredge-spoil islands, even if some of their methods and materials are anything but natural.

For example, plans at James Island call for replacing much of its squishy shoreline with a ring of boulders and other armoring. In many locations, such “hardened” shorelines have been shown to reduce important habitat for waterbirds, crabs and fish. But federal biologists tracking the presence of wildlife on Poplar, which also sports a stone perimeter, have documented up to 15,000 birds a day touching down on the island, representing more than 200 species. Before the work got under way, only 10 bird species frequented it.

“These projects like Poplar Island and Mid-Bay create great wetlands and habitat for birds, terrapins, fish and crabs,” said David Blazer of the Port Administration. “That’s why they call it beneficial use.”

Myers and other environmentalists say their advocacy remains crucial because rebuilding-islands projects are an expensive way to deal with dredged material and can face criticism for the cost.

Poplar Island offers a preview of what to expect at James and Barren, said Michael Scott, a geography professor at Salisbury University who has closely studied Dorchester’s receding coastline for years.

“They will use very similar techniques as they did with Poplar Island,” Scott said, “They are very good at engineering these sorts of things.”

In the 1840s, Poplar Island, which lies 10 miles south of the Bay Bridge off Talbot County, covered 1,100 acres. But by the 1990s, it was little more than a 5-acre slab. The island’s restoration began in 1998 in response to a state-enacted prohibition on the open-water dumping of dredge material.

The original plan called for returning the island to its mid-19th-century size. But the Army Corps expanded the project, moving forward with construction of a 575-acre addition on the island’s north side in 2016.

In Dorchester, one of the lowest-lying regions around the Bay, officials and local residents began lobbying in the late-1990s for their islands to be next in line for the spoils of the port’s war against incoming silt. They hope the enlarged islands will shield the communities behind them from further erosion and storm surge damage.

“They’re barrier islands to protect the main island,” said Bruce Coulson, a longtime advocate for the projects who owns a campground on Taylors Island, which lies just south of James. He has begun to worry that one of Taylors’ main roads and power line trunks are in danger of sliding into the sea.

Coulson and others knew, though, that the Army Corps measures progress in decades. So,they settled in and kept up their pressure.

Coulson said the math was on their side.

“They have to have [a dredged material placement site],” he said. “They either have to find a place to put dredge material or they have to close the port.”

The Port of Baltimore is tied to more than 140,000 jobs and generates $2.6 billion in business revenue annually, according to the state.

The Army Corps selected James after analyzing 100 potential island restoration sites, Tracy said. “James Island was chosen because it offered a large viable area that would maximize the material placement capacity while allowing infrastructure costs to be kept to a minimum,” he said.

James lies in the mouth of the Little Choptank River. As recently as 1903, it was still tenuously connected to Taylors Island, but that link has long since washed away. A half-mile of water now stands between their shores.

When the English settled the island in the 1660s, calling it St. James Island, it measured about 1,350 acres. The Pattison family came to own it for about two centuries. By the late 1800s, according to William B. Cronin’s book, “The Disappearing Islands of the Chesapeake,” James was still substantial enough to contain about 20 families, a Methodist church, a school and a store.

But not long after James’ human occupants departed for higher ground in the early 1900s, new residents took their place. In 1916, an enterprising resident named Clement Henry introduced sika deer to the island.

In the decades after their introduction, some of the diminutive elk, native to Asia, swam to the mainland, establishing a population prized by hunters across much of the Eastern Shore to this day. The island’s population has vanished along with all but a few acres of land.

“You used to look out on the Bay and see an island. Now you go out there and see a couple little sticks sticking up. It’s going fast now,” Coulson said.

As part of an erosion study he performed for county officials, Scott created an animation of satellite images that show James devolving from a well-defined land mass in 1972 to a few chunks of earth in 2016.

“You can clearly see the significant loss of fast ground over a very short period of time,” he said.

Farther south, off the fragmented peninsula called Hooper’s Island, Barren Island also was, at its height, home to a bustling community — with 14 farms, a Methodist church, a one-room schoolhouse and a smattering of stores, Cronin reports in his book. But a rising water and storm flooding drove the last family off the island in 1916. Hunters built a lodge on the island in 1929. But it fell into disuse, with the Bay lapping at its foundation by the 1980s.

The U.S. Fish and Wildlife Service now owns and manages the island as part of the Chesapeake Marshlands National Wildlife Refuge Complex.

Restoring Barren will protect a healthy patch of underwater grass that has become exposed to wave action, Tracy said. And the northern end of Hooper’s Island, which is home to several of the state’s few remaining crab-picking houses, will be less susceptible to erosion.

Last August, the projects cleared an important hurdle when the Army Corps and Port Administration finalized engineering designs for the islands. The action allows the agencies to move forward with more-complex blueprints, the last step before construction.

But it will take years, he said, to build the dike for James Island and have the site ready for dredge material.

The plan is to start with Barren. Workers are set to begin building its dike and an 8,500-foot breakwater in 2022. Dredge placement is expected to begin two years later, with material scooped from the bottom of the nearby Honga River, Tracy said. Work is scheduled to wrap up by 2029.

Construction on James Island will ramp up as operations on Poplar Island scale back, he said. Work on the outer stone dike will begin in 2024, with dredge material being sent its way beginning in 2028.

Dredge-filling and maintenance operations there are expected to continue into the 2060s, according to the Army Corps’ timeline, which its website notes is contingent on the availability of funding.

Jeremy Cox is a Bay Journal staff writer based in Maryland. You can reach him at jcox@bay