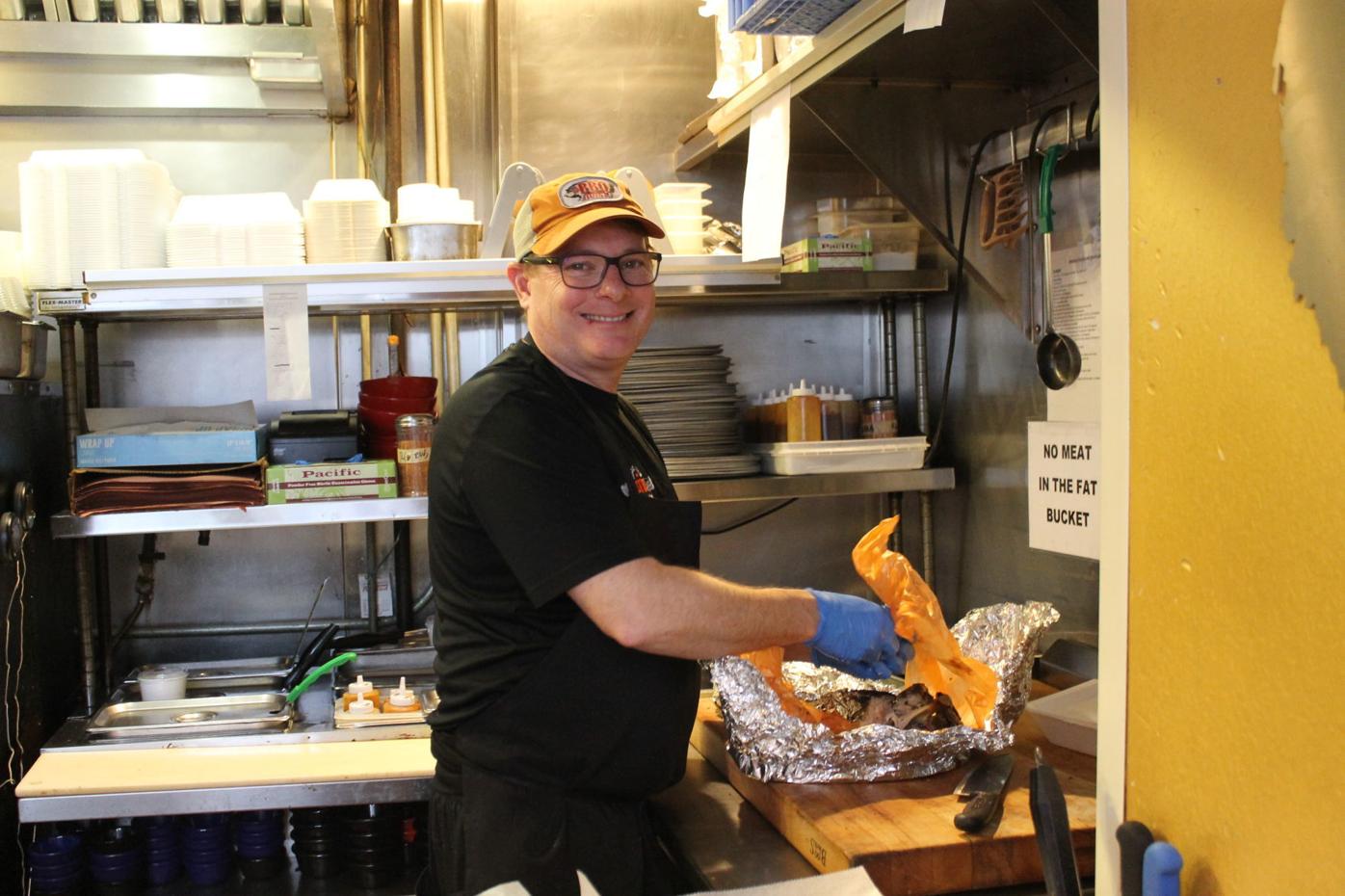 Chef Andrew Evans slices up some of his award-winning brisket on Friday, March 6, at The BBQ Joint in Easton. 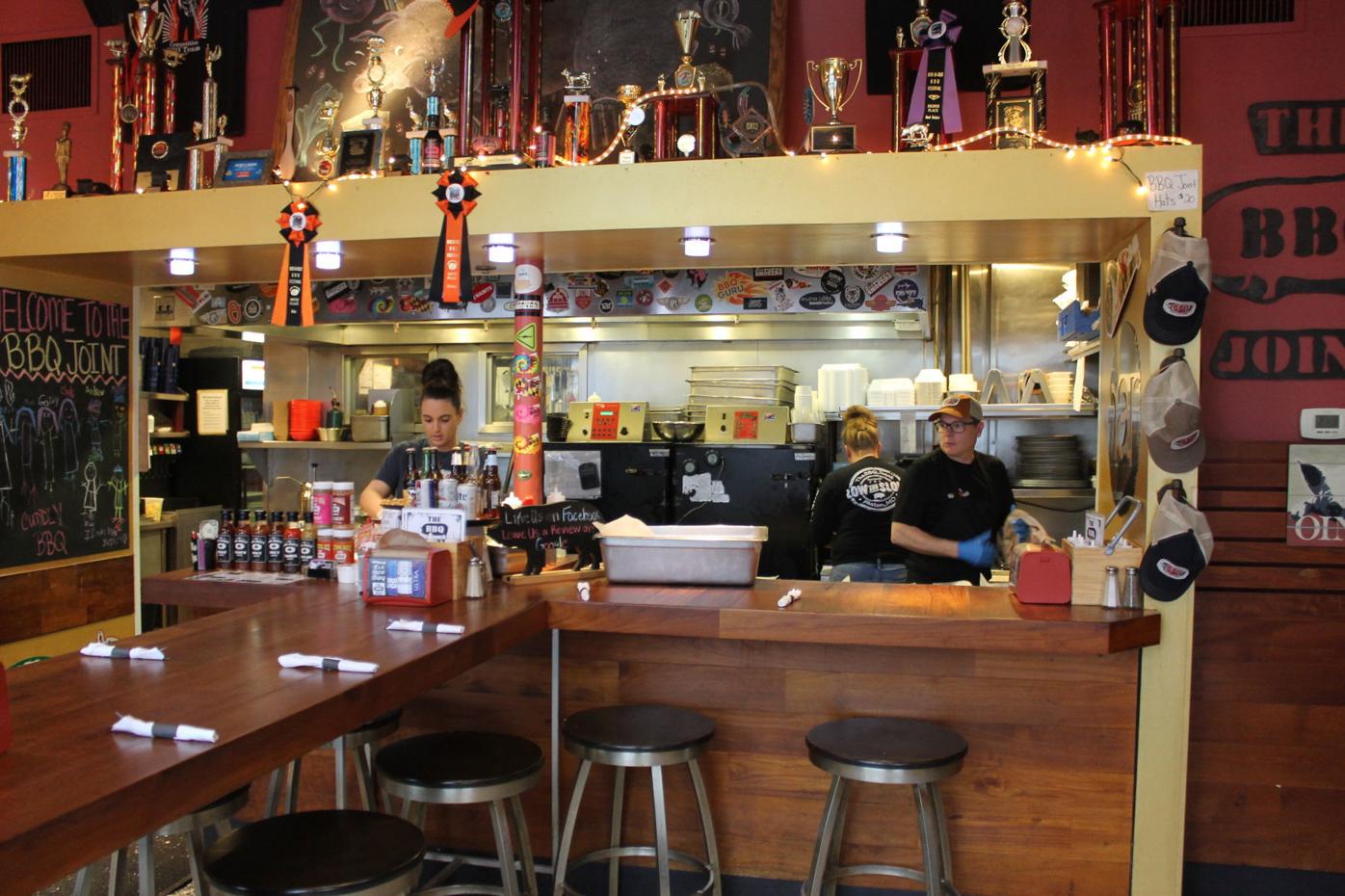 Chef Andrew Evans’ trophies and ribbons are displayed on Friday, March 6, at The BBQ Joint in Easton. Evans’ award-winning barbecue has earned him honors at many competitions. 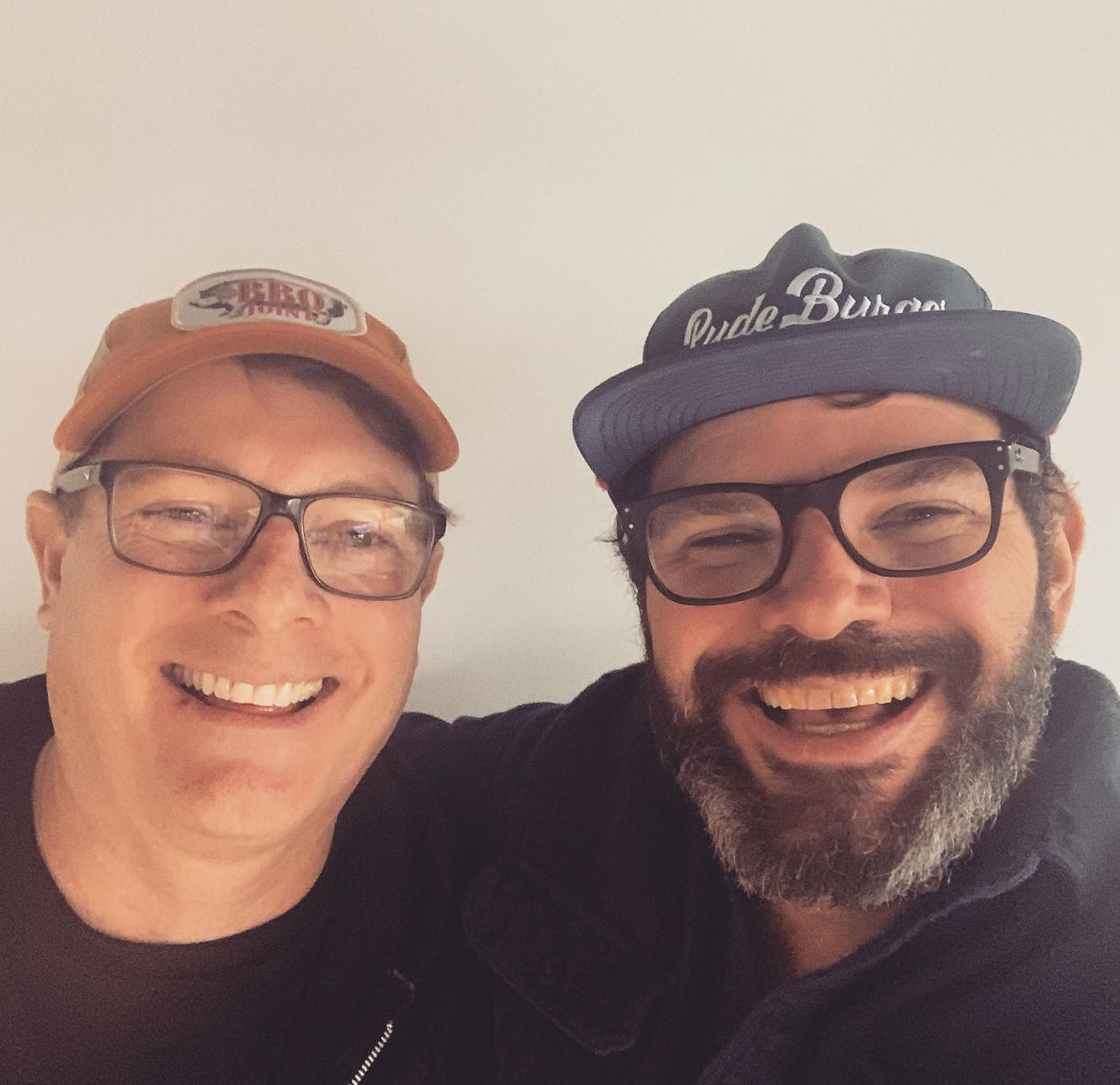 Andrew Evans, left, and Tim Cureton pose for a selfie on Friday, March 6.

Chef Andrew Evans slices up some of his award-winning brisket on Friday, March 6, at The BBQ Joint in Easton.

Chef Andrew Evans’ trophies and ribbons are displayed on Friday, March 6, at The BBQ Joint in Easton. Evans’ award-winning barbecue has earned him honors at many competitions.

Andrew Evans, left, and Tim Cureton pose for a selfie on Friday, March 6.

On Tuesday, March 24, Cureton will take ownership of The BBQ Joint in Easton.

Evans began his barbecue journey in 2004, when he was selected as a celebrity guest judge at the Jack Daniels World Championship Barbecue Competition. Six years later, he opened The BBQ Joint at 216 E. Dover St.

Evans, who studied at the Culinary Institute of America, opened his first Easton business, The Inn at Easton, 20 years ago.

“Andrew really has been the face of the restaurant scene for a long time, with The Inn at Easton, which was widely regarded as one of the best in the D.C. region,” she said. “Then when he transitioned to barbecue and barbecue contests, he brought that fine dining finesse.”

Evans has enjoyed his time managing restaurants in Easton.

“Happily and gratefully, the heart of my career cooking has been in Easton, Md. I’ve had more success with it than I could have ever imagined,” he said. “It’s been a remarkable run, and I’ve loved every minute of it.”

He said he’s ready to transition to other projects, and he felt this was the right time, and the right person, to hand over the reins.

“I can’t think of it going to someone better,” Evans said of Cureton. “It’s just the right time to transition myself and also watch the next generation come through and do their thing and keep it going.”

Cureton has been involved in the Easton hospitality scene for 15 years, starting with Rise Up Coffee Roasters. He’s also a fond customer of The BBQ Joint, so when the opportunity to take over the business presented itself at exactly the right time, he decided he wanted in.

“It made sense to me that this could be a really good fit,” Cureton said.

Cureton and his brother Brett are opening a new restaurant in mid-April called Rude Burger. The restaurant will be just around the corner from The BBQ Joint at 4 S. Aurora St.

“The two restaurants, Rude Burger and The BBQ Joint, which will become Rude BBQ, could work really great in tandem,” Tim Cureton said.

Brett Cureton has been in the restaurant business for 28 years and has been an executive chef for 16 years. The brothers have been looking for ways to team up since Tim Cureton started Rise Up Coffee.

“The stars kind of aligned to purchase the 4 S. Aurora St. property,” Tim Cureton said. “We felt really lucky and wanted to do something of consequence.”

He said Brett will manage the two restaurants, and they’re not planning on making any big changes at The BBQ Joint.

“We’re thrilled to kind of take over where Andrew has left off,” he said. “I love the entire menu. As of right now, nothing is being removed from the current menu.”

Cureton said the recipes that made The BBQ Joint such a local favorite also changed hands, so customers can continue to expect the delicious barbecue they’ve come to love. Even the popular banana pudding that’s served in a Mason jar still will be available.

“I love the banana pudding,” he said. “We may add a few things, but nothing is getting changed.”

He said the The BBQ Joint’s employees have been a huge part of the restaurant’s success, and he’s looking forward to working with them.

“Chef Andrew loves his team of people,” Cureton said. “Our great hope is that level of fulfillment will be felt with us taking over. I’m absolutely sure we’ll have best teams of people at both restaurants.”

The BBQ Joint will close for minor refurbishing on Tuesday, March 24, and will reopen as Rude BBQ on Wednesday, April 1. Rude Burger will open two weeks later on Wednesday, April 15. Both locations will serve Rise Up Coffee, which can be found in many locations around the Shore. Rise Up has 10 locations, and they’ll be starting construction on their new Easton location next month.