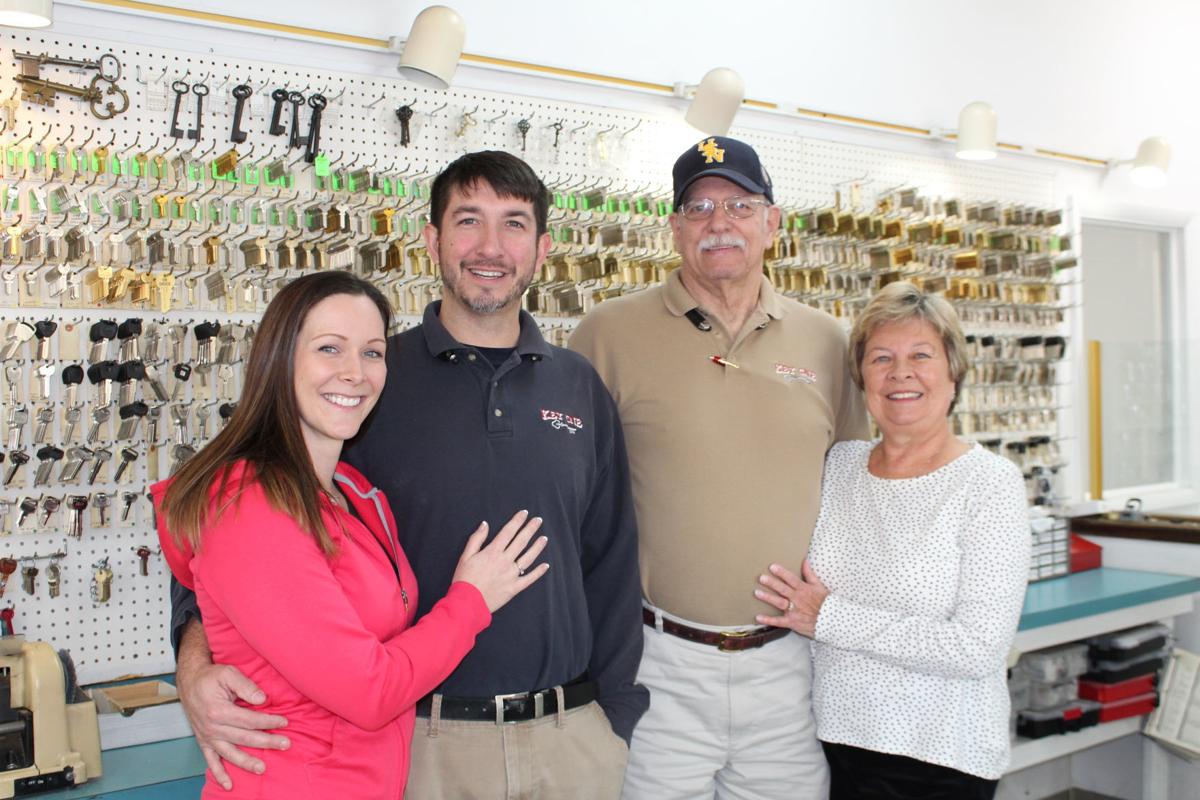 Lauren and Justin Davis, left, are ready to take the locksmithing reins from Don and Helga Remington at Key One in Easton. 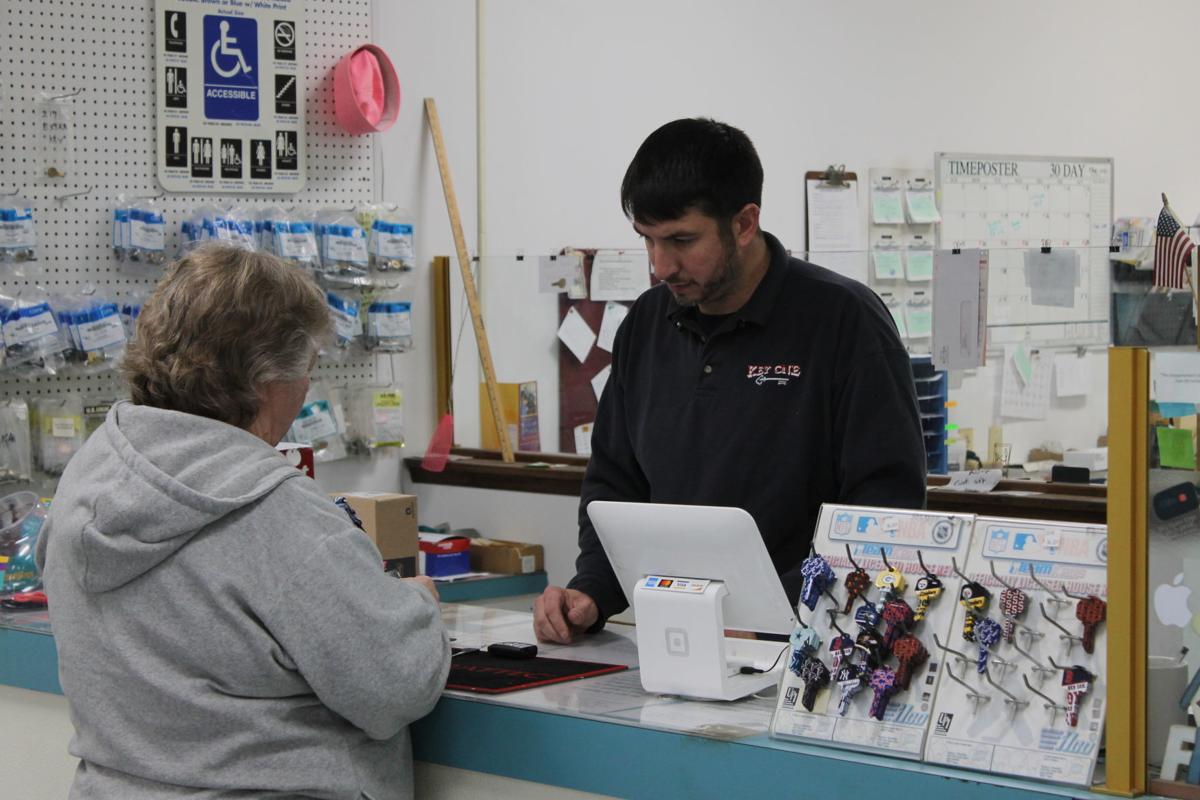 Justin Davis assists a customer on Jan. 7 at Key One in Easton. 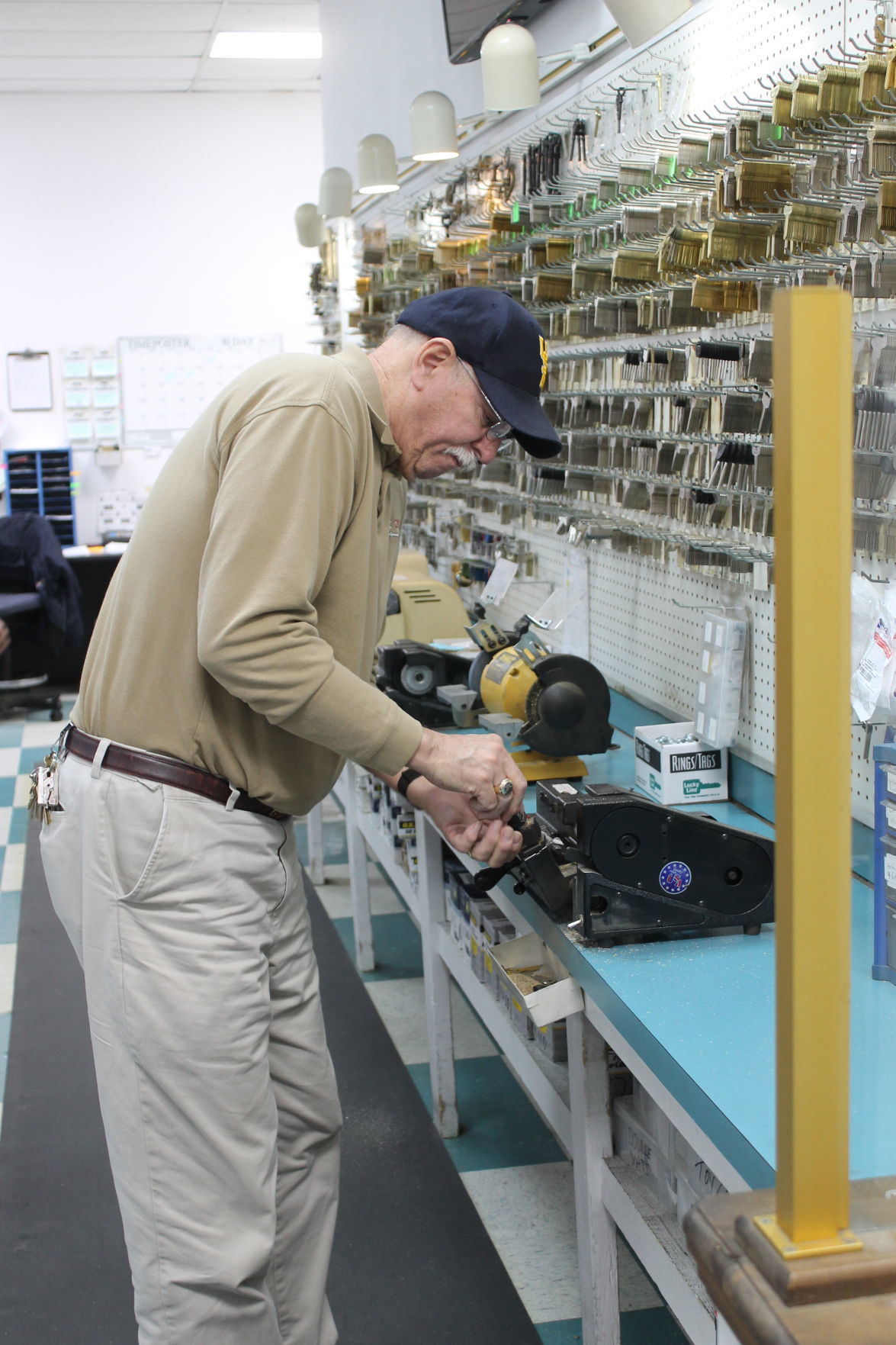 Don Remington cuts a key for a customer at Key One in Easton. 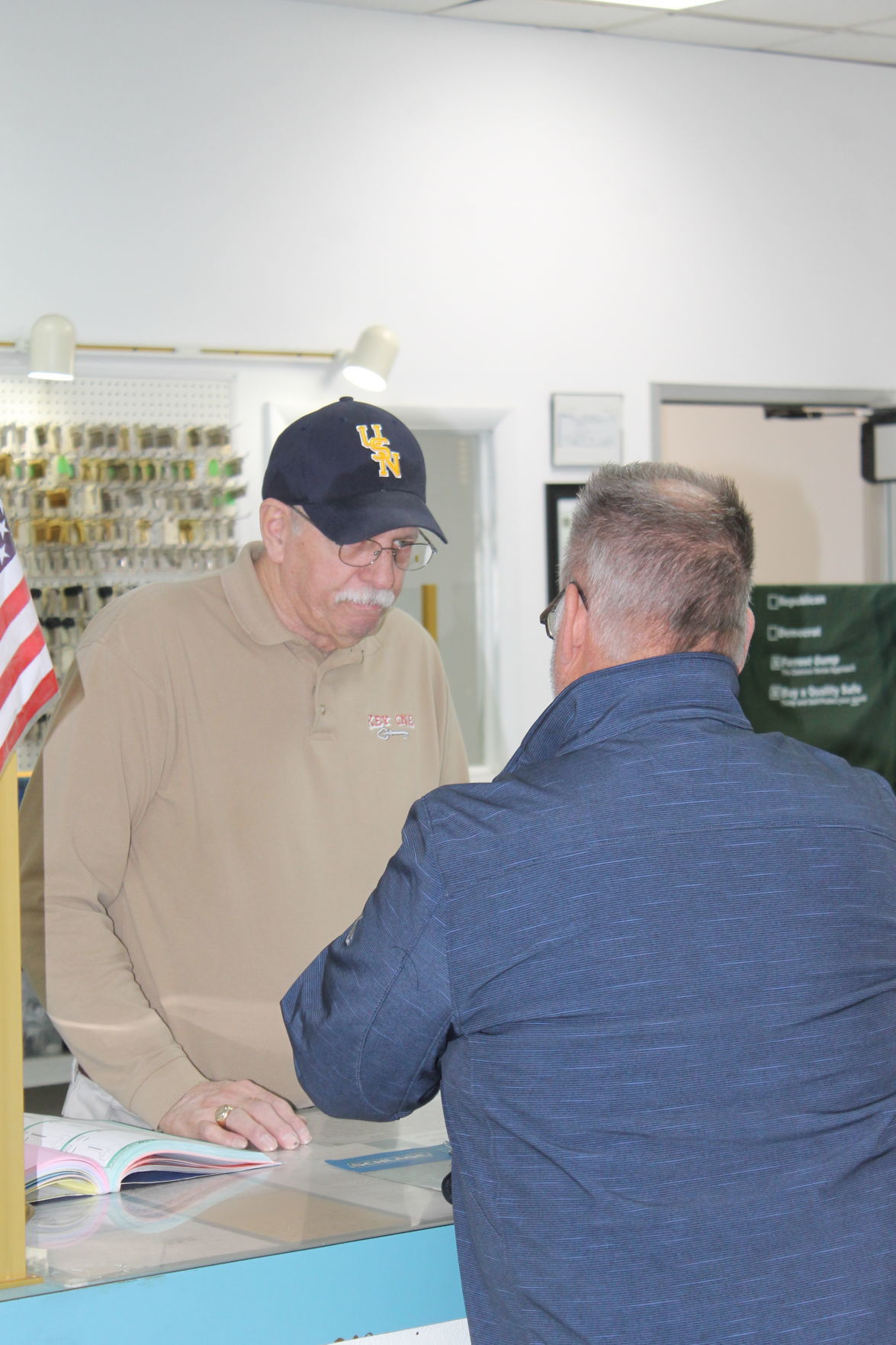 Don Remington assists a customer at Key One in Easton. 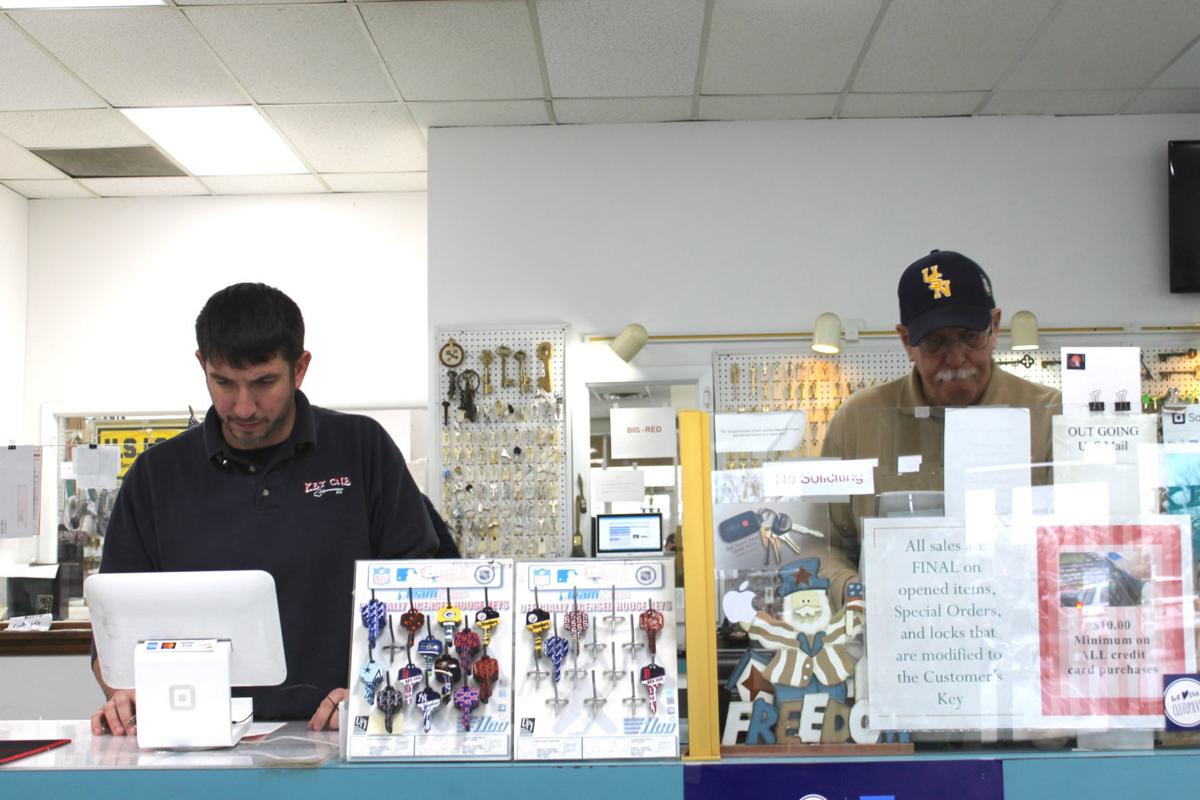 Justin Davis, left, and Don Remington finalize customer orders and sales at Key One in Easton. 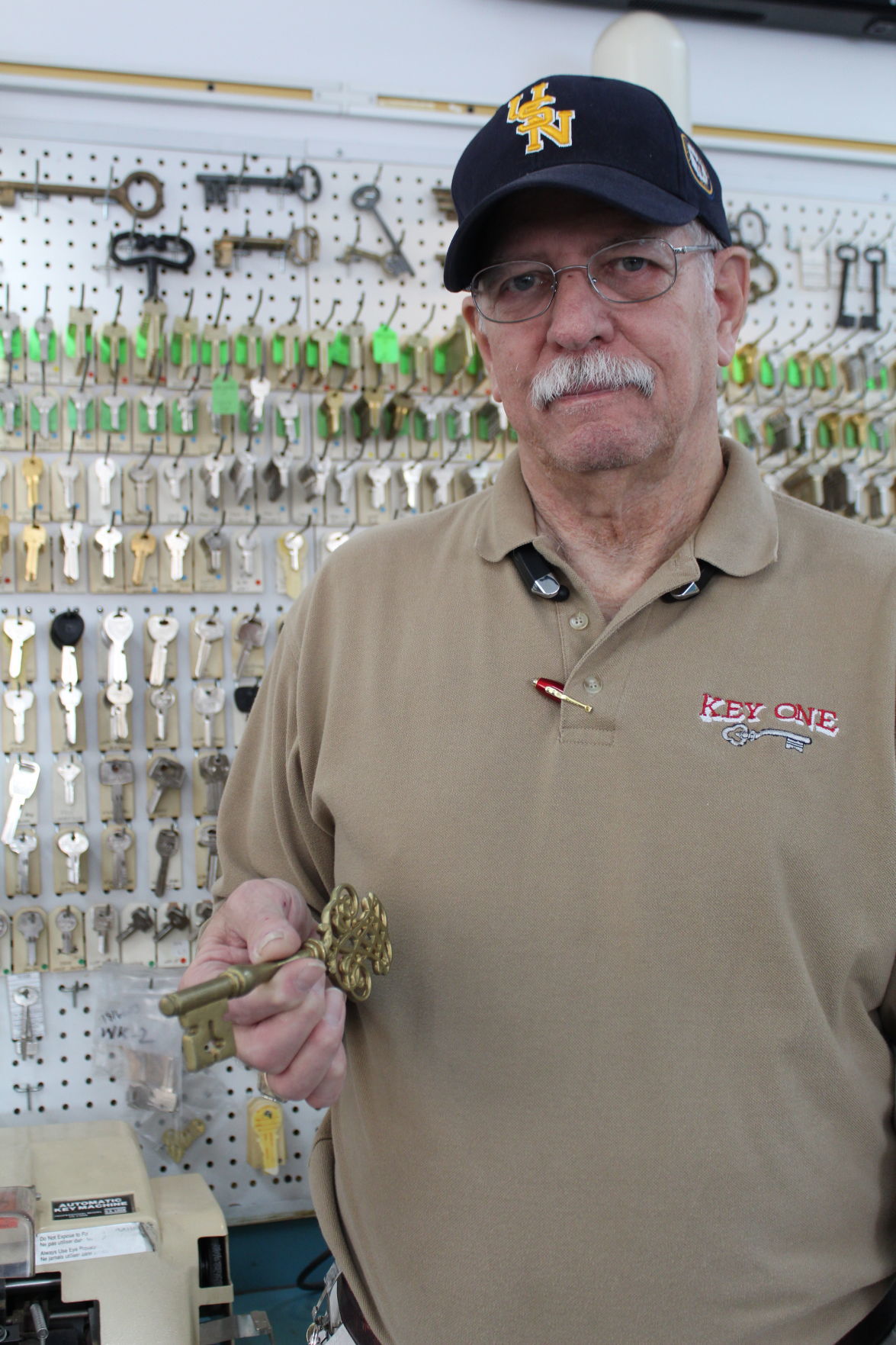 Don Remington shows off a magical key used by Santa to visit homes without chimneys.

Lauren and Justin Davis, left, are ready to take the locksmithing reins from Don and Helga Remington at Key One in Easton.

Justin Davis assists a customer on Jan. 7 at Key One in Easton.

Don Remington cuts a key for a customer at Key One in Easton.

Don Remington assists a customer at Key One in Easton.

Justin Davis, left, and Don Remington finalize customer orders and sales at Key One in Easton.

Don Remington shows off a magical key used by Santa to visit homes without chimneys.

EASTON — After his travels around the world with U.S. Navy were over, Don Remington returned to the Eastern Shore with his wife Helga, an Easton native. He commuted to the Pentagon daily for nearly ten years and was ready to start the next chapter of his life.

“I was still young enough,” he said. “I had to do something.”

Remington decided to venture into the world of locksmithing and open up his Marlboro Road shop in Easton 24 years ago. Now he’s handing over the keys to Justin Davis, his very first intern, who has been with the company for 18 years.

In 1996, Remington was thinking about names for his business, but he had to make a phone call first.

“My younger brother owns Key One in Tucson, Arizona,” he said. “I asked him, ‘Is it okay if I use the name Key One?’ and he teased me, ‘As long as you don’t come to Arizona, it’s okay.’”

He went to training for the art of locksmithing at his brother’s business, followed up with a locksmithing convention in California. He came back to Easton to set up shop in November 1996.

“I started out basically working out of a truck and doing jobs. But I had been smart enough that when the new phone book came out in June. I had the pager number in the phone book,” he said.

Remington was working on a car lock in a parking lot when he was approached by a man who was looking for a locksmith to take on a large project at the Wye River Conference Center.

He wanted to remain available for other potential customers. “I said, ‘I’m just one person. I’ll be up here every morning at 8:30 and I’ll work until noon. I’ll do one cabin at a time.’”

Two years after starting his business, the owner of Talbot Lock and Key, the other locksmithing shop in Easton, approached Remington about selling him his company. Remington took on the business and employees under the name of Key One.

“We grew the business enough that we needed more people,” he said. “I went to the high school, (which) had an internship program for students to go to school half a day and work as an intern for half a day.”

Justin Davis was Remington’s first intern. “He worked in the internship starting in January of ‘02,” he said. “He stayed on for the summer, and halfway through the summer we said, ‘You’re doing really good — how would you like to work?’ That was 18 years ago.”

Davis had worked in a few different industries before the internship, but for him locksmithing was the key.

“I bounced around through the restaurants, you know, a couple of construction sites here and there to try to find work,” he said. “And I just didn’t find anything that I really wanted to follow through with.”

He started working in the shop and assisting customers. Sometimes he would shadow one of the more experienced locksmiths on bigger jobs.

“Mike would need a hand, or something like that, for big jobs and stuff.” Remington said. “And Justin would be the runner.”

“That’s how I got good at taking things apart and realizing how they work,” Davis said. “Because not everything goes back the way it came off the doors.”

New technologies have changed locksmithing considerably in the last 20 years, but Remington ensured Key One stayed on top of the latest innovations.

“Much like everybody else, we have our own continuing education, whether it be through outside sources or in-house teaching,” he said. “If somebody learns something, we teach everybody in here so everybody knows.”

About three years ago, Davis approached Remington about the possibility of buying the business from him one day.

“I had picked his brain about it,” Davis said. “Sort of a ‘What would it take?’ kind of thing.”

Remington said he’d had offers from larger companies in the past, but they didn’t work out. He decided to continue with the business until he couldn’t continue any more.

“It was one of these things where I’m 74 years old.” he said. “I can’t keep up the pace that I was doing, and my wife was always worried about me. So Justin came to me and says, ‘You know, I really want to buy the company.’”

“Helga was the one that kept me straight,” Remington said. “Making sure that everything is paid, done legally, the people that work for us are getting paid and all the paperwork is done.”

Davis’s wife Lauren is taking over Helga’s role handling bookkeeping for the business.

“She’s excited. We’d talked about this dream,” Davis said. “Then the opportunity finally arrived. So she’s taken over how we do the payroll, and the bookwork and the accounts payable.”

Remington is thrilled that Key One stays a local Talbot County business.

“I’d wanted to have the company stay with local people and stay local instead of, you know, some kind of big thing,” he said. “And it makes me happy that it’s Justin.”

Davis plans to continue in Remington’s footsteps. “Mr. Don set up a very successful business,” he said. “We will be keeping the course — just continue in the same avenue and make sure that everyone here is taken care of. Moving forward, we will evolve as the times need it.”

Remington handed over the keys on Jan. 1, and plans to enjoy time traveling with Helga and visiting the grandkids. But they’ll continue to mentor the Davises as their locksmithing legacy continues.