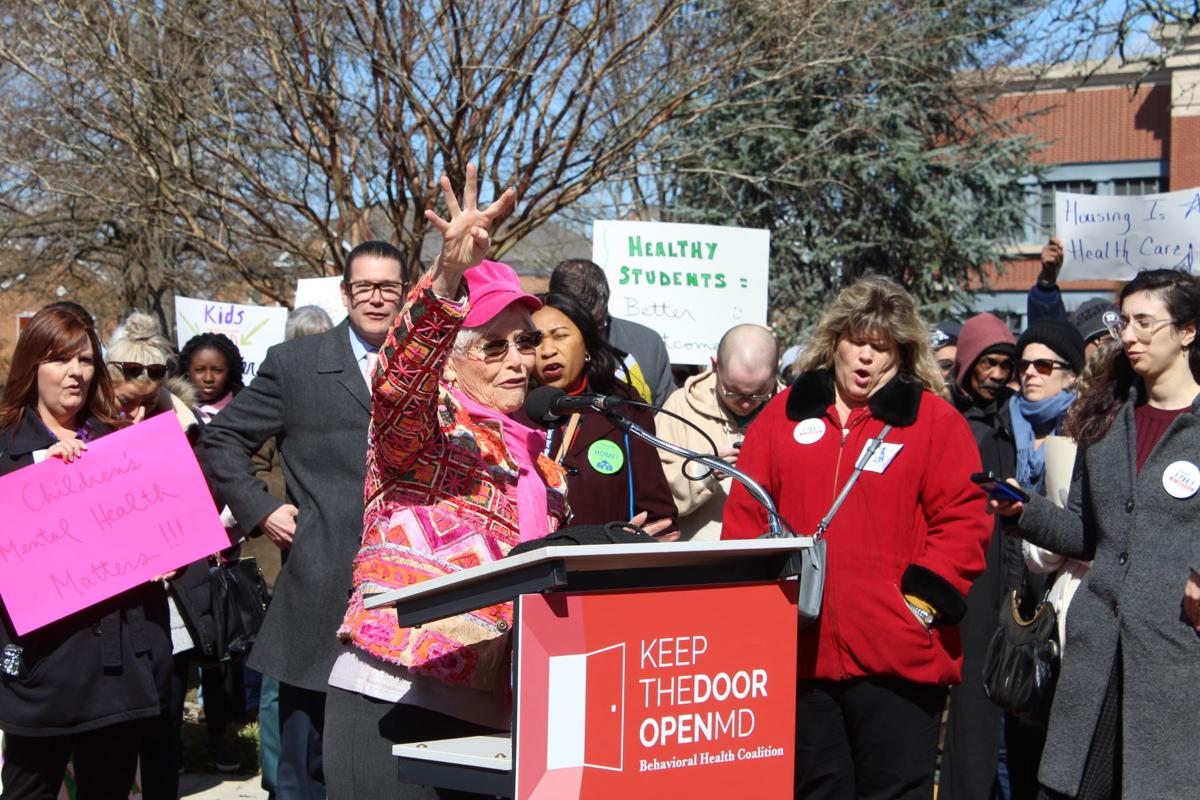 Sen. Addie Eckardt, R-37-Mid-Shore, holds up four fingers during a behavioral health care rally Thursday, Feb. 27, to illustrate the 4% of state funding she would like to see go toward mental health and substance abuse programs. “We want the full 4%,” Eckardt said. 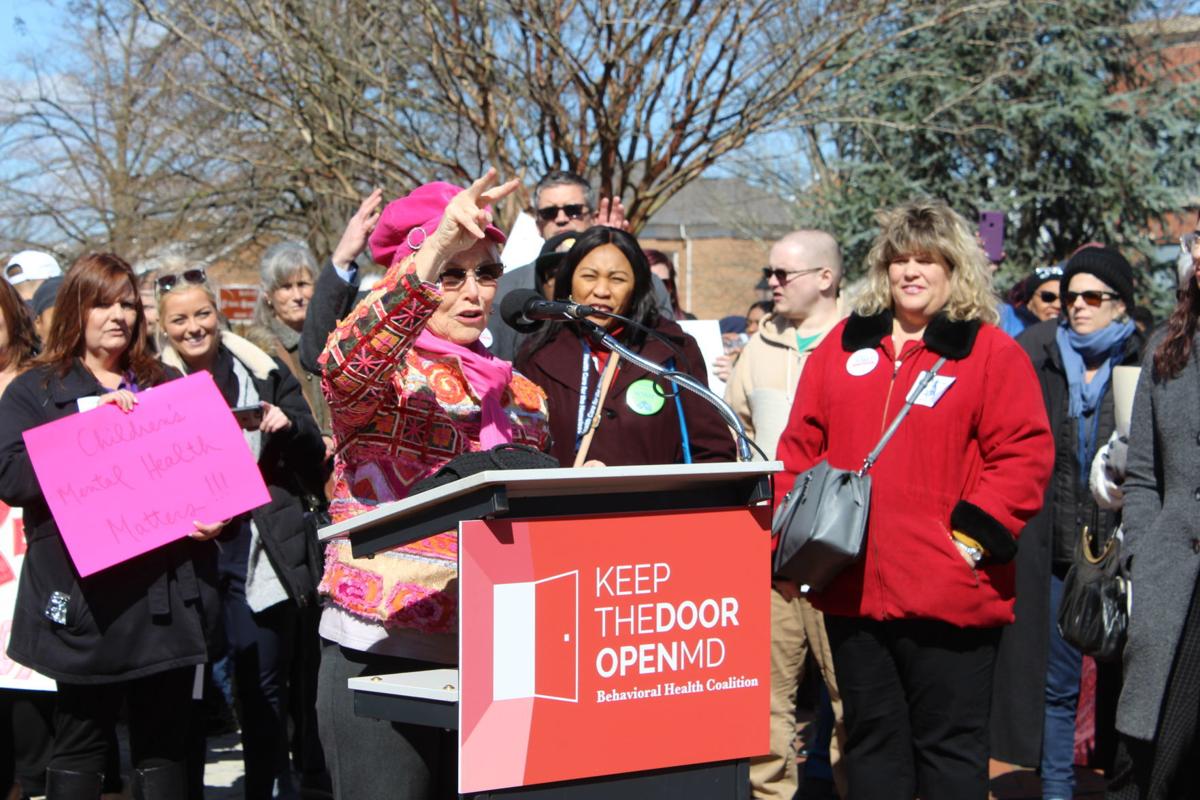 Sen. Addie Eckardt, R-37-Mid-Shore, speaks to a crowd of hundreds of behavioral and substance use healthcare advocates during a “Keep the Door Open” rally Thursday, Feb. 27, in Annapolis. 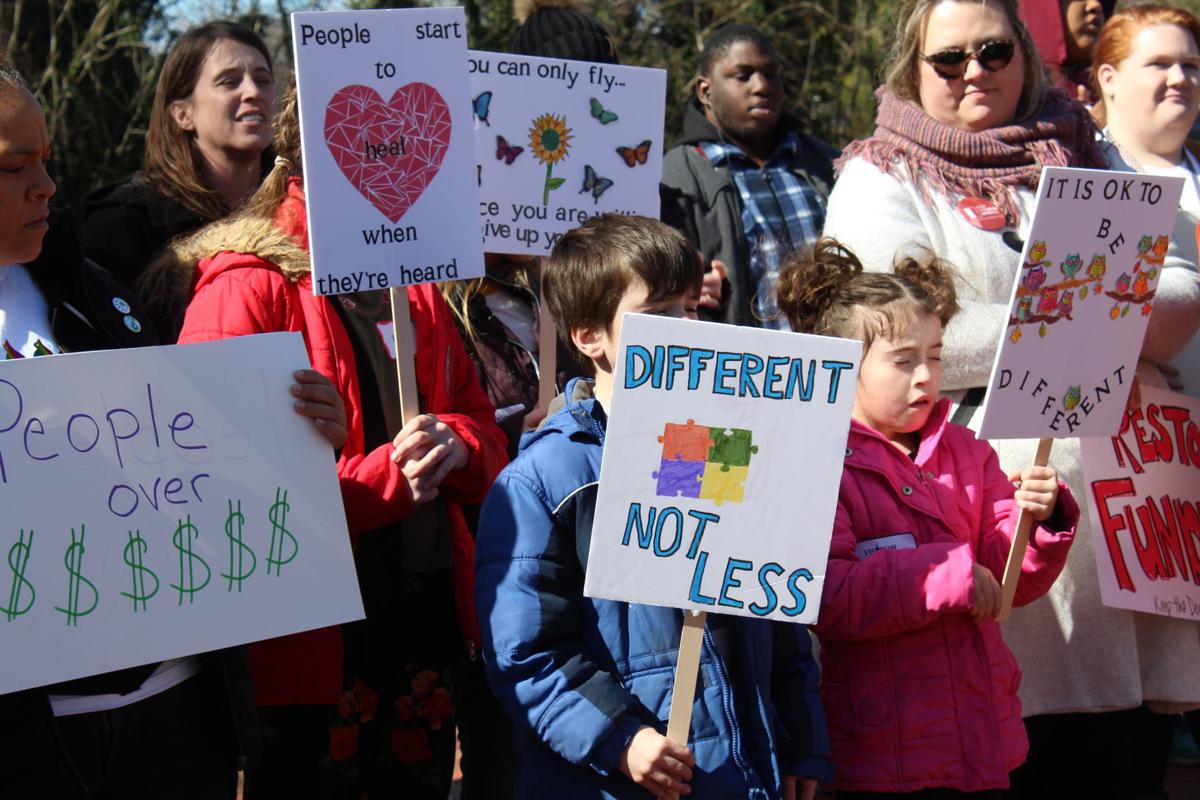 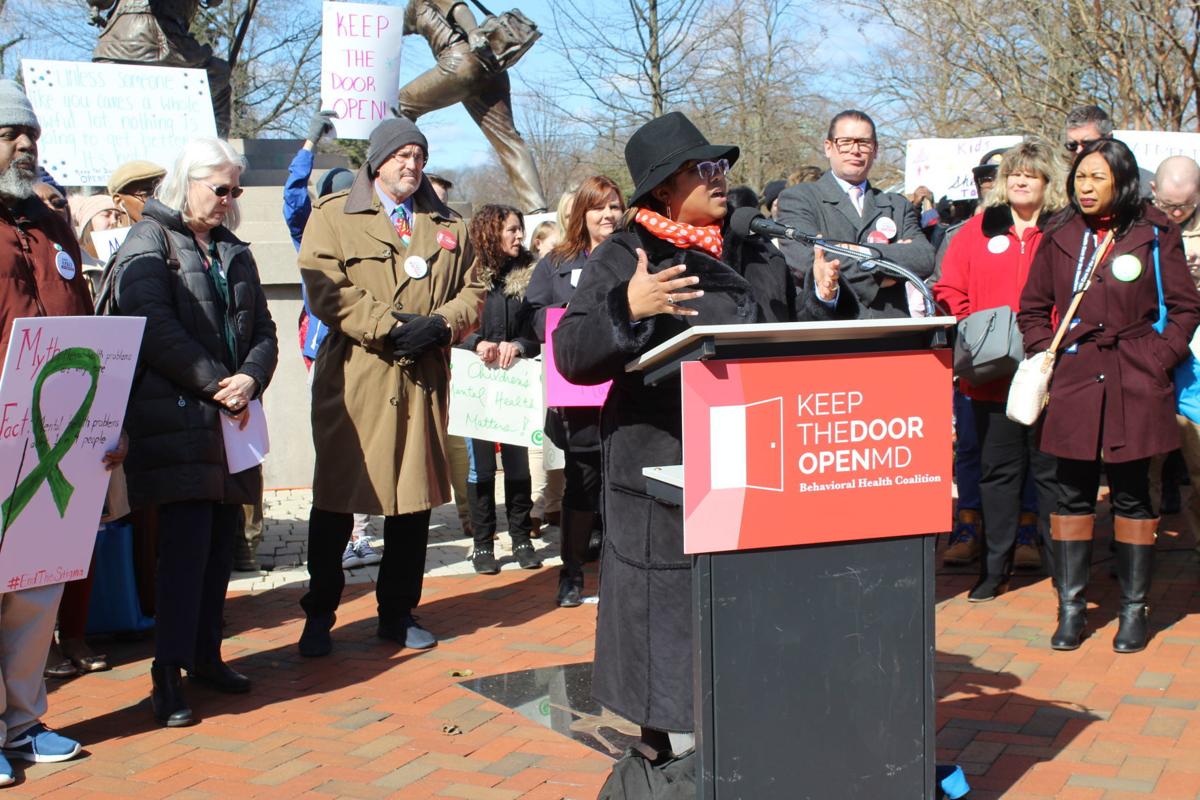 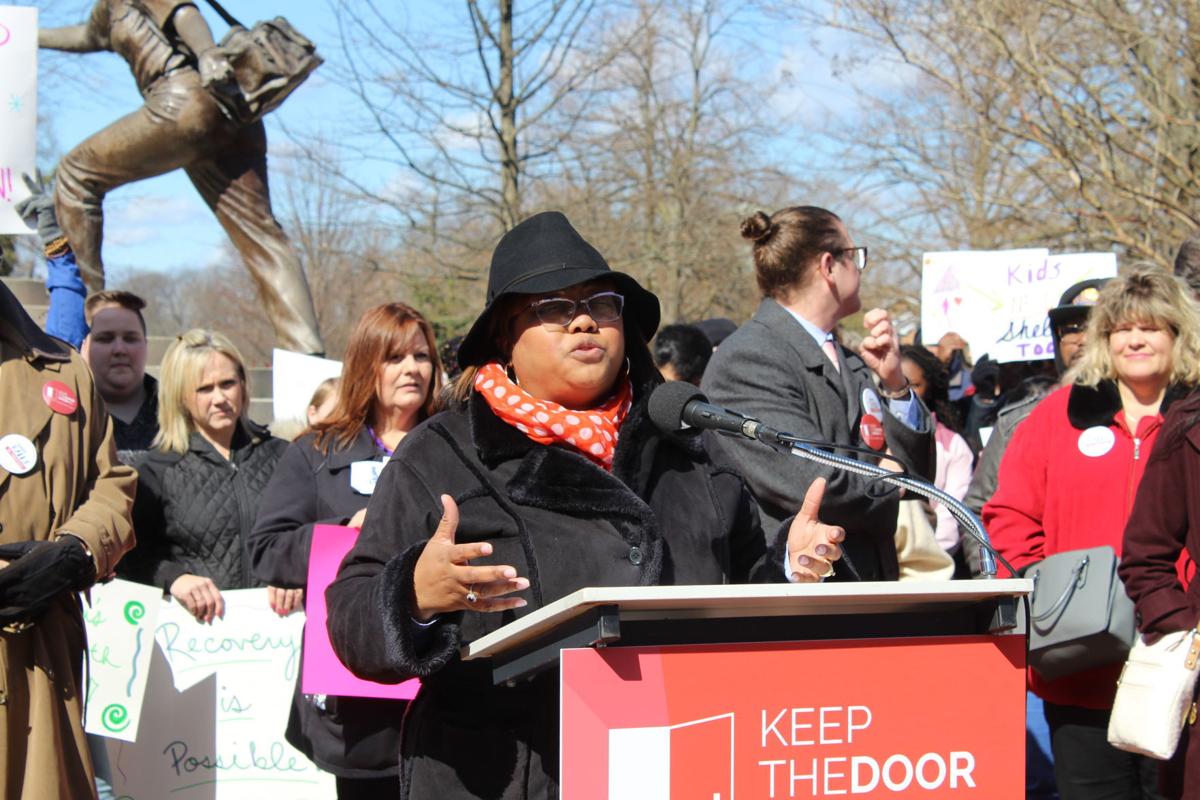 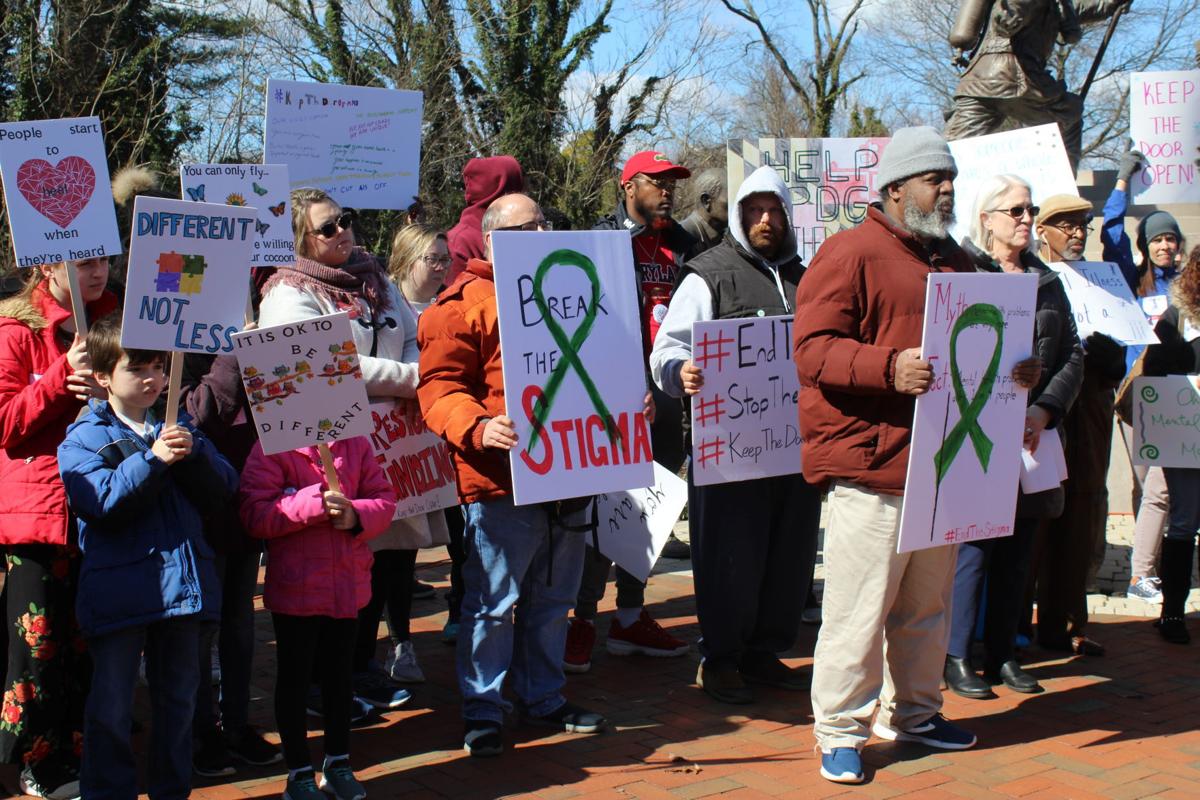 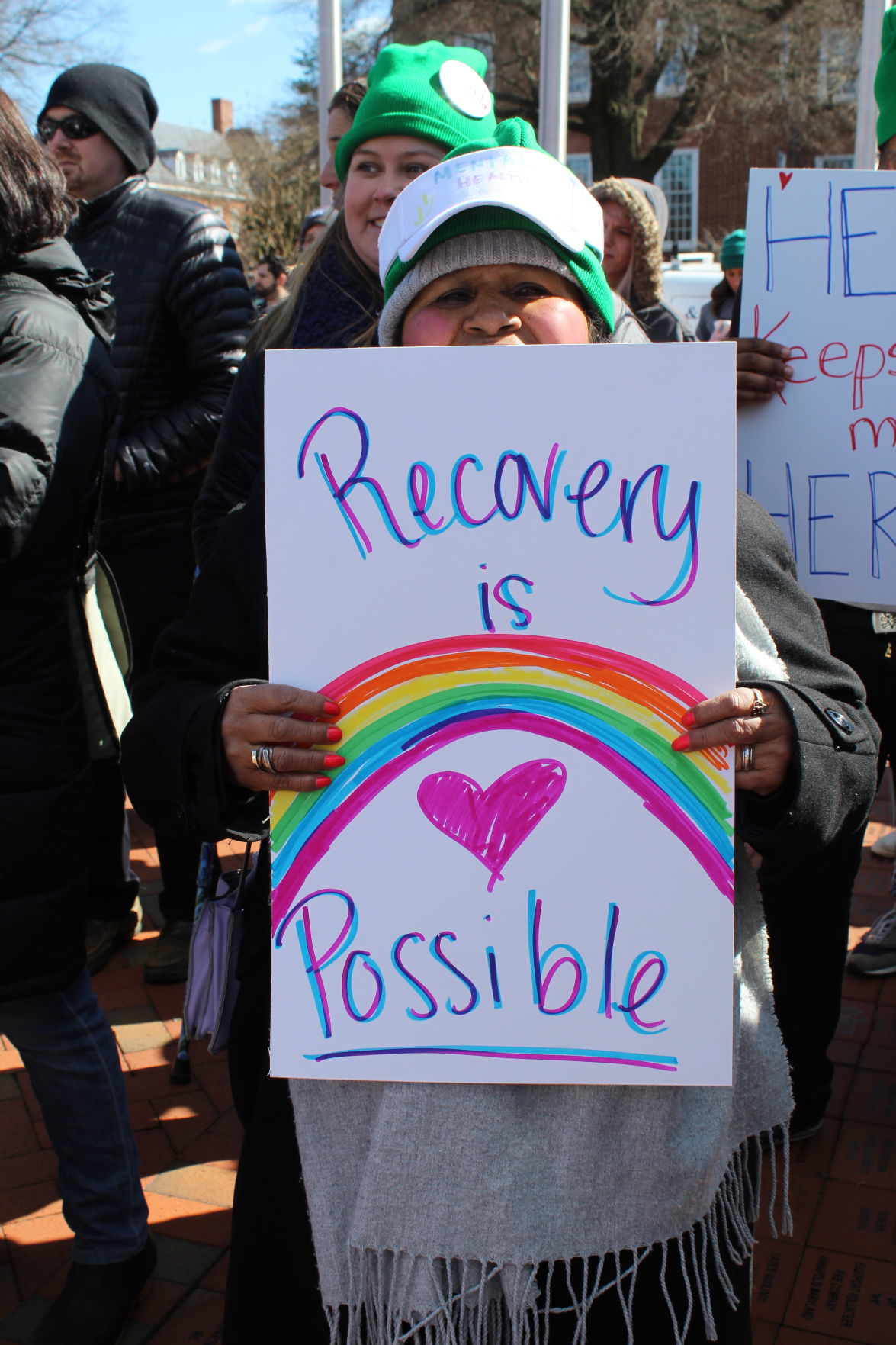 A woman bears a sign that reads, “Recovery is possible,” during a rally against proposed state behavioral healthcare funding cuts Thursday, Feb. 27, in Annapolis.

Sen. Addie Eckardt, R-37-Mid-Shore, holds up four fingers during a behavioral health care rally Thursday, Feb. 27, to illustrate the 4% of state funding she would like to see go toward mental health and substance abuse programs. “We want the full 4%,” Eckardt said.

Sen. Addie Eckardt, R-37-Mid-Shore, speaks to a crowd of hundreds of behavioral and substance use healthcare advocates during a “Keep the Door Open” rally Thursday, Feb. 27, in Annapolis.

A woman bears a sign that reads, “Recovery is possible,” during a rally against proposed state behavioral healthcare funding cuts Thursday, Feb. 27, in Annapolis.

Sen. Addie Eckardt, R-37-Mid-Shore, who is on the Senate Budget and Taxation Committee, and has been a vocal supporter of pumping funds into health care, assured the crowd she’s fighting for dollars as Gov. Larry Hogan’s proposed 2021 budget nears approval.

Hogan’s budget, according to the Maryland Behavioral Health Coalition, which organized the rally, threatens to slash mental health and substance use treatment funding by almost $25 million. The coalition said the proposed “chronic underfunding” will “set us back” as a state as Maryland continues to battle an opioid epidemic and widespread behavioral issues among children.

“We have a new slogan in our committee. Watch my hands,” Eckardt said to the rally-goers, motioning with two and then four fingers to illustrate a desire to increase the budget allotment for behavioral health services from 2% to 4%.

“We want to make sure we go from 2% to 4%. That’s what we want to do,” Eckardt said, arousing a reciprocation of excitement from the crowd.

Del. Sheree Sample-Hughes, D-37A-Dorchester, who spoke shortly after Eckardt during the rally, echoed her sentiments. Sample-Hughes, waving her pointer finger in the air, said, “When you look at the needs of our community, mental health and substance abuse disorders rise to the top.”

Sample-Hughes shouted out her district, which she said is “in need of adequate health care.” She said some of her constituents have told her they were forced to move from the Eastern Shore to ensure their family could access the care it needed.

“Too often, I have people come to me about how they could not access the proper mental health and substance use care and services they need on the Eastern Shore of Maryland,” Sample-Hughes said. “That, to me, is unacceptable. It’s unacceptable that we are not ensuring equities across the board.”

Another Shore figure, Nicole Acle, a Wicomico County Council member, took the podium during the rally to say there’s an “extreme shortage” of mental healthcare providers for all age groups in eastern Maryland.

Acle said the closest in-network provider to her home on the Shore for her child, who has a mental health disorder, is three hours away.

“I have been forced to go out of network and pay out of pocket to access the health care (my child) desperately needs,” she said, prompting sighs and grunts from a crowd of roughly 200 health care advocates.

Other lawmakers and health care professionals said during the rally that, because of scarce funds and resulting mental health facility closures across the state, mentally ill or drug-addicted individuals in underserved areas are being sent to hospital emergency departments and detention centers in lieu of treatment centers.

Trish Todd, an Eastern Shore substance abuse program manager, said during a meeting with the Eastern Shore Delegation in Annapolis on Feb. 14 that the situation is “pretty dire” for struggling youth in the state.

Todd told the lawmakers stories of a pregnant teenager with an opioid addiction who had nowhere to go for treatment and a 17-year-old who overdosed in her bedroom. Instead of getting medical care, she said, they ended up in a detention center getting one hour of addiction treatment a week.

The lawmakers perked up upon hearing Todd’s account of the state’s youth behavioral healthcare operations, with Del. Jeff Ghrist, R-36-Caroline, saying, “This should be a priority. These kids, in some cases, are a threat to themselves and others.”

Sample-Hughes also chimed in during the Feb. 14 meeting to say the lawmakers “were all shocked” when they saw Hogan had decided to cut behavioral healthcare funding in his budget proposal.

“We are taking this seriously. We know the importance of your work,” she said to a panel of behavioral health professionals sitting alongside Todd.

Many advocates have said they’re leaning on the Kirwan Commission, which recently proposed a controversial statewide education reform plan, to put more of an emphasis on behavioral health services for children in schools.

The Behavioral Health Coalition wrote in a press release following the rally that it’s urging legislators to ensure adequate funding “for a comprehensive set of strategies included in the Kirwan Commission’s report for enhancing school-based behavioral health services to better support young people.”

“You being here matters,” Sample-Hughes said to a sea of advocates during Thursday’s rally. “Continue fighting the good fight because it’s worth fighting.”