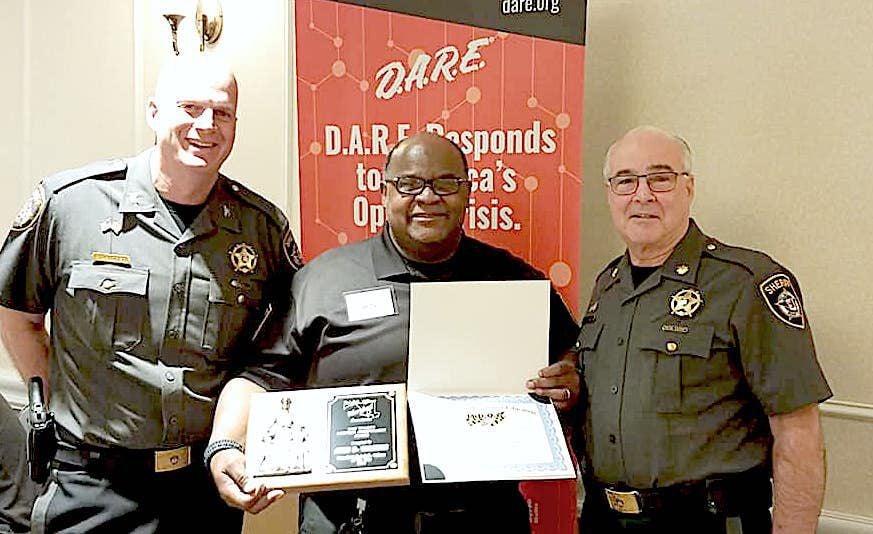 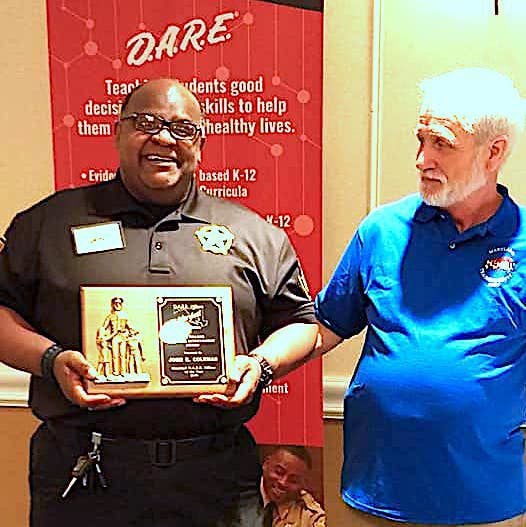 EASTON — Talbot’s own singing police officer has been named the Maryland State D.A.R.E. Officer of the Year.

Dfc. John Coleman, who has guided thousands of Talbot County schoolchildren in Drug Abuse Resistance Education (D.A.R.E.) during his varied 31-year career in law enforcement, got a surprise Wednesday, April 17, when he was attending a D.A.R.E. in-service conference in Ocean City.

Coleman was an Easton police officer in 1996 when he first took on the job of D.A.R.E. in his agency.

D.A.R.E. is a program for schoolchildren that helps them lead lives free of substance abuse, violence and other dangerous behaviors, usually taught by a police officer. It typically is taught to county fifth-graders in an intensive 10-lesson curriculum.

Coleman has embraced his role as a mentor for young people, and even developed a D.A.R.E. song, based loosely on the tune of “Daisy Dukes” by 69 Boyz that was popular in 1993.

He said he didn’t like the lyrics of the original song, so he made up some new ones, and he called his new song the “D.A.R.E. Rap.”

Coleman, the singing police officer, left a mark in the minds of his students that went further than substance abuse prevention.

“I believe in it with my heart and soul, I really do,” Coleman said. “I told one group, I said, ‘I would stand on my head if it made a difference in you using drugs or not.’”

Eventually, the D.A.R.E. program was taken on by another agency, and Coleman went back out on patrol. He served on EPD’s accident reconstruction unit but still found time to work on events involving children, such as spearheading the toy drive for underprivileged kids during the holidays and Shop with a Cop.

When he retired after 30 years with the EPD in 2017, it wasn’t long before the phone rang.

The Talbot County Sheriff’s Office wanted him as its full-time D.A.R.E. officer. Coleman jumped at the chance.

The D.A.R.E. curriculum has evolved to suit the latest trends, including the opioid crisis. Coleman had to go through training all over again.

He said he wants to retire the “D.A.R.E. Rap,” but fellow law enforcement officers told him not to.

Coleman said he taught D.A.R.E. in the ‘90s and is teaching it now, and he knows it is making a difference.

Some of his former students have become teachers, professionals and even law enforcement officers.

“They tell me stories about ‘I remember you said, I remember you did this or that ,and it kept me from getting involved in drugs,’” Coleman said.

“As long as the kids are listening, I will keep singing and talking about D.A.R.E., because I am totally sold on it,” Coleman said. “I see it make a difference.”

Coleman was nominated by Claude Nelson, who helped train and served as a mentor to Coleman in the 1990s when Coleman first came to D.A.R.E. as an Easton police officer. Nelson now is the Maryland state D.A.R.E. coordinator.

“So I’m pretty familiar with John, his enthusiasm, his personality, his love for kids and his passion for this program,” Nelson said.

The award also is known as the Sam Walker Lifetime Achievement Award, named for the first D.A.R.E. educator who helped train police officers in Maryland beginning 1986.

“He is just a big bubble of enthusiasm,” Nelson said. “You’ll not find a better ambassador for D.A.R.E.”

During the conference luncheon, Coleman was sitting in the front and a biography of the award winner was read with names redacted. Coleman said the biography started to sound familiar.

He looked up in total surprise and saw his wife Barbara, son Brandon, Talbot County Sheriff Joe Gamble and Maj. Scott Mergenthaler, who had been hidden before, and realized they were talking about him.

Most recently, Coleman has risen in the ranks with the Maryland D.A.R.E. Officers Association. Last year, he was vice president, which made him a shoo-in as president this year.

He assisted with training of 17 D.A.R.E. officers in Anne Arundel County in 2018 and completed Mentor Officer Training in 2018. The sheriff’s office has given him freedom to work with D.A.R.E. beyond the borders of Talbot County as his schedule permits.

Coleman is active in his community and church, and assists the youth minister at Christ Episcopal, Character Counts in Talbot County, the Department of Social Services’ “Empower Me” program and the Talbot County Sheriffs Office anti-opioid abuse initiative Talbot Goes Purple.

News of his singing ability has spread far and wide.

Coleman is a singer of “The Star-Spangled Banner” at Delmarva Shorebirds and Bowie Baysox games. He will be out there singing again this season.

As the Maryland State D.A.R.E. Officer of the Year, Coleman is eligible to be chosen as the top D.A.R.E. officer in the United States, as part of D.A.R.E. America.

If that happens, Coleman will need to travel to a national convention in Phoenix later this year. Very possibly, sounds of the “D.A.R.E. Rap” might be heard echoing in the Arizona desert.