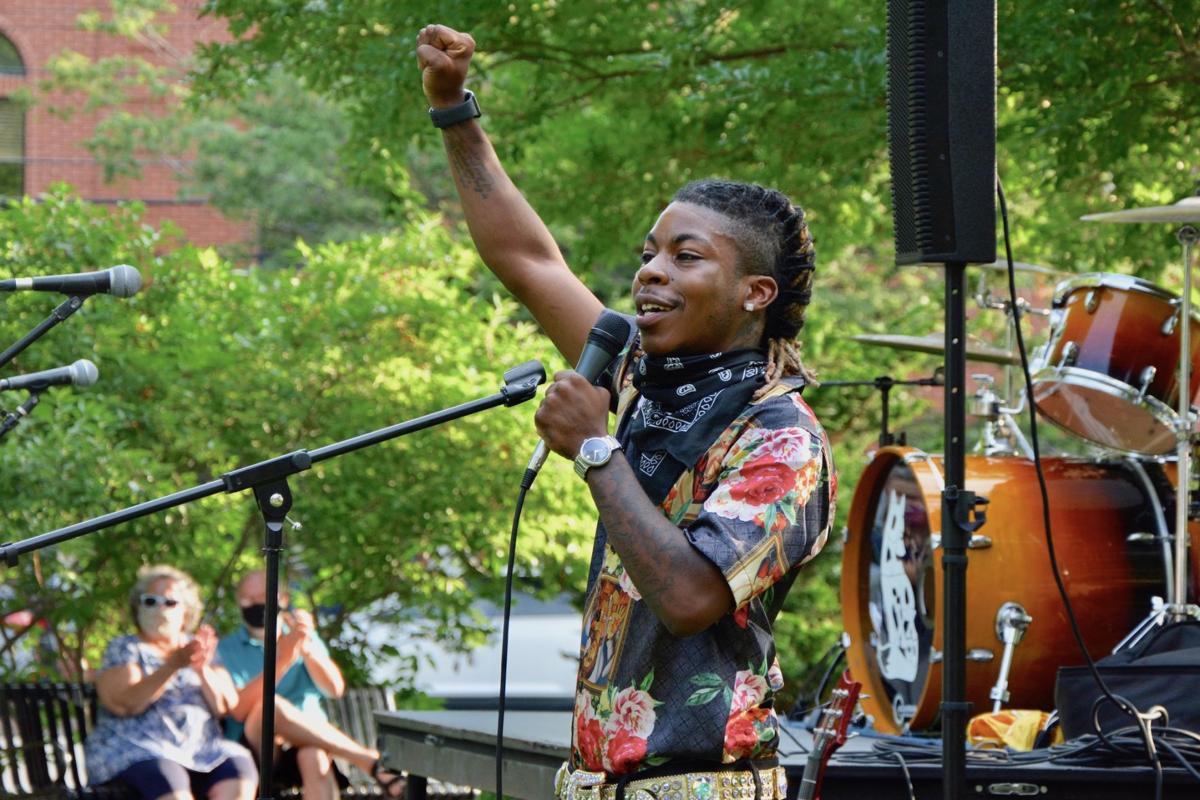 Tyshawn Johnson, a hip-hop dancer and singer who performs as YvngSwag, credits his parents with helping him be the man he has become. “It starts at home ... raise your children right,” he told the audience at the Juneteenth rally in Chestertown. 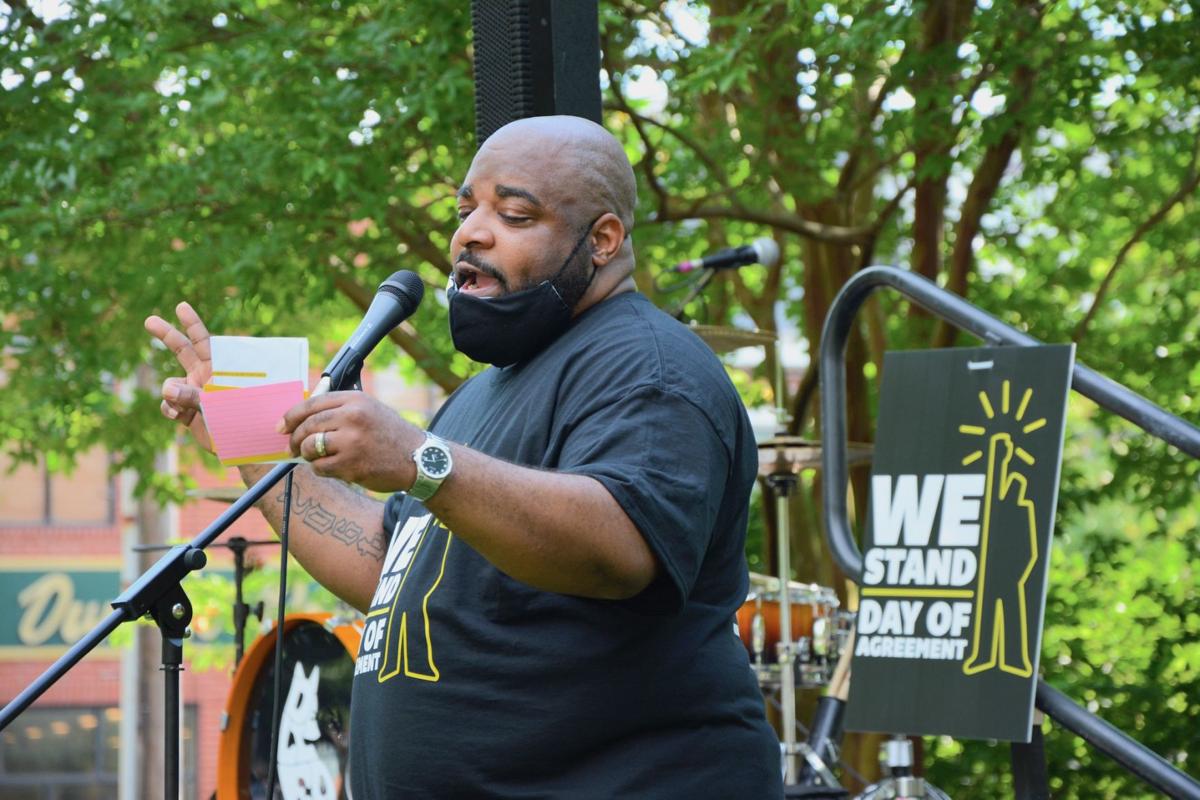 John Queen is a founder of the newly formed Black Union of Kent County, which hosted the Juneteenth rally in Chestertown on Friday night. 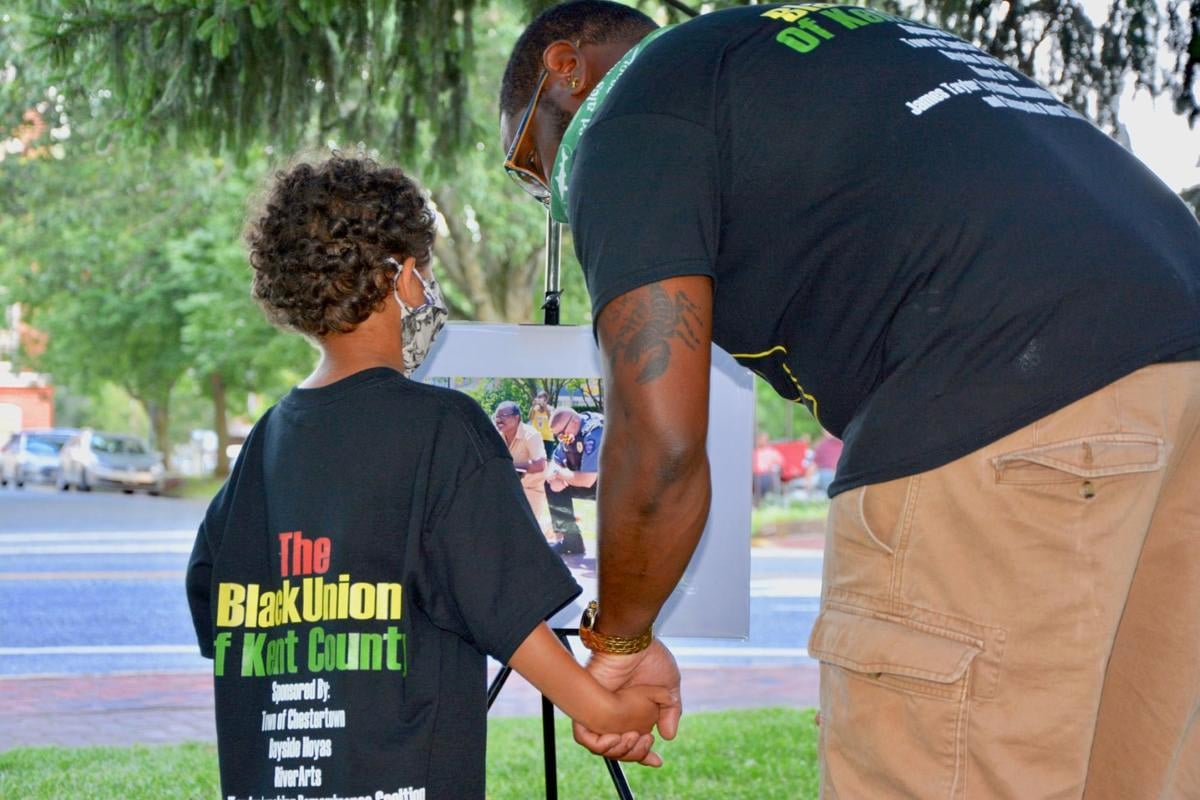 Michael King of Greensboro and his 4-year-old son Bryson. 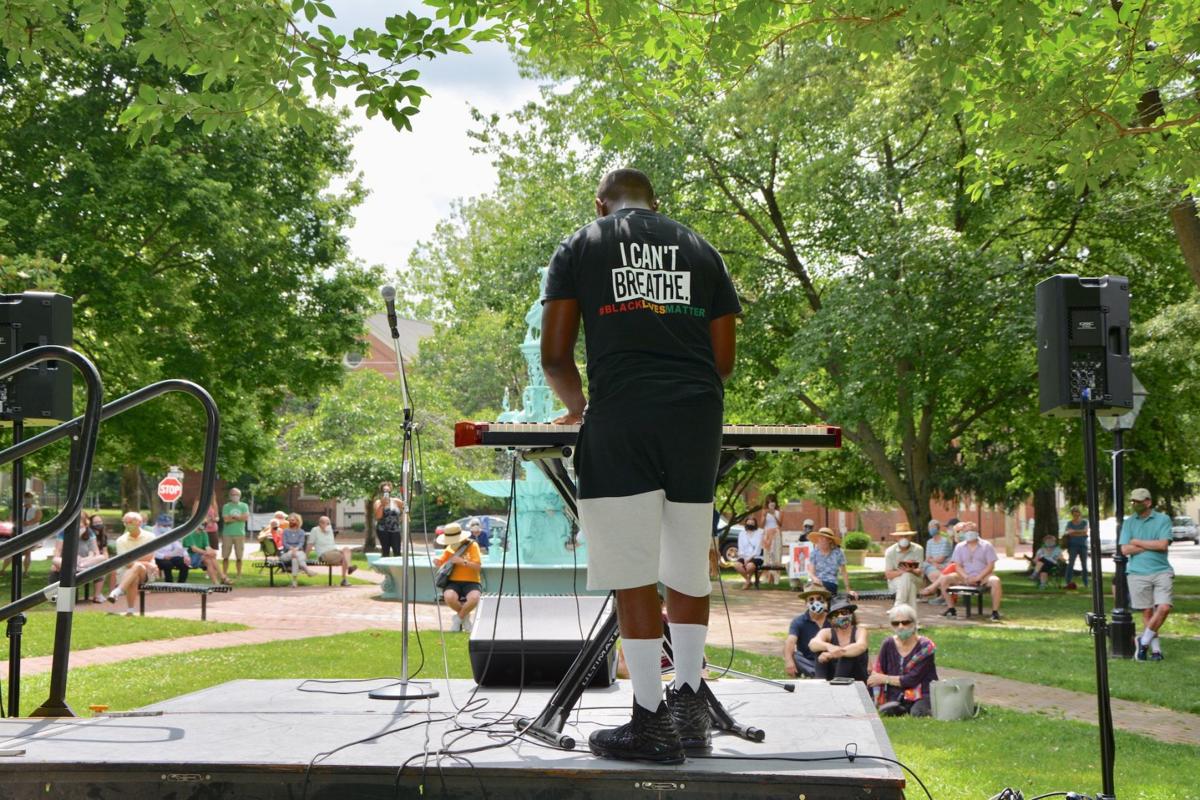 Devon Elias, who performs as Donny Live, sang and played the keyboard during the “It’s Time for Change” rally Saturday in Chestertown’s Fountain Park. His performance was a tribute to his cousin, Anton Black, who died while in police custody in September 2018. 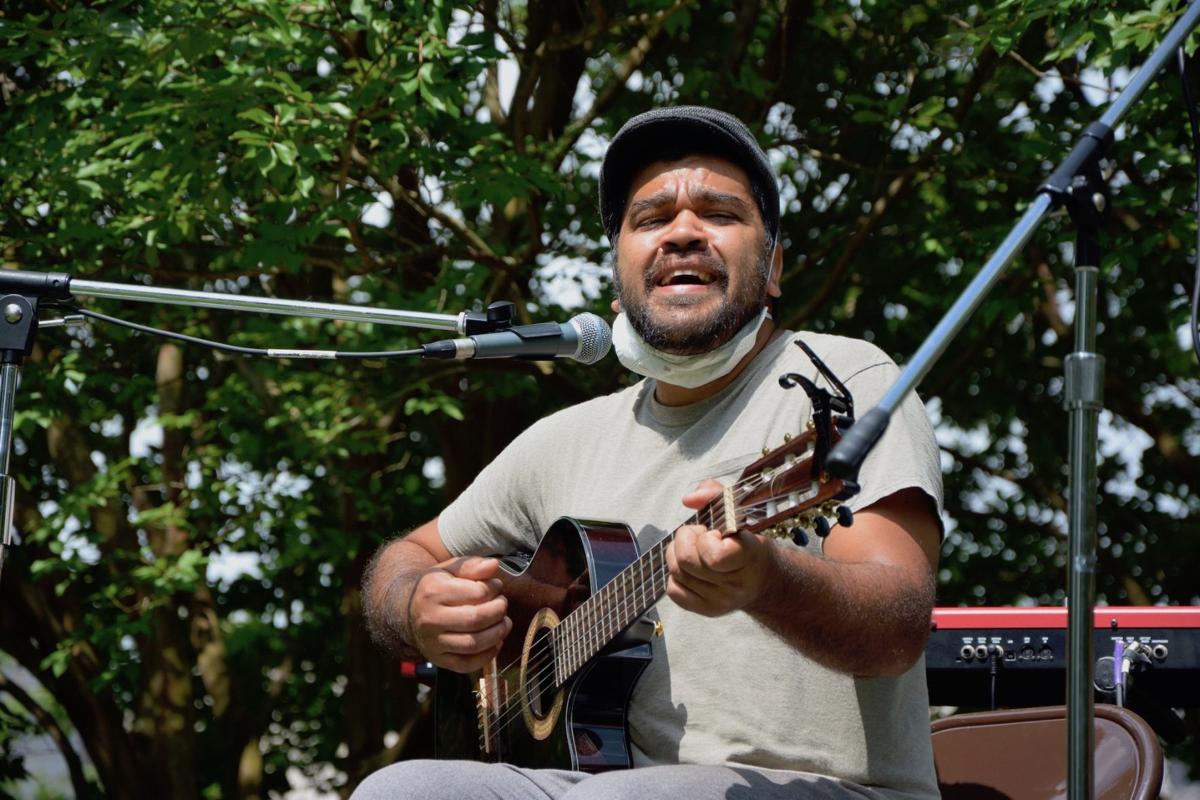 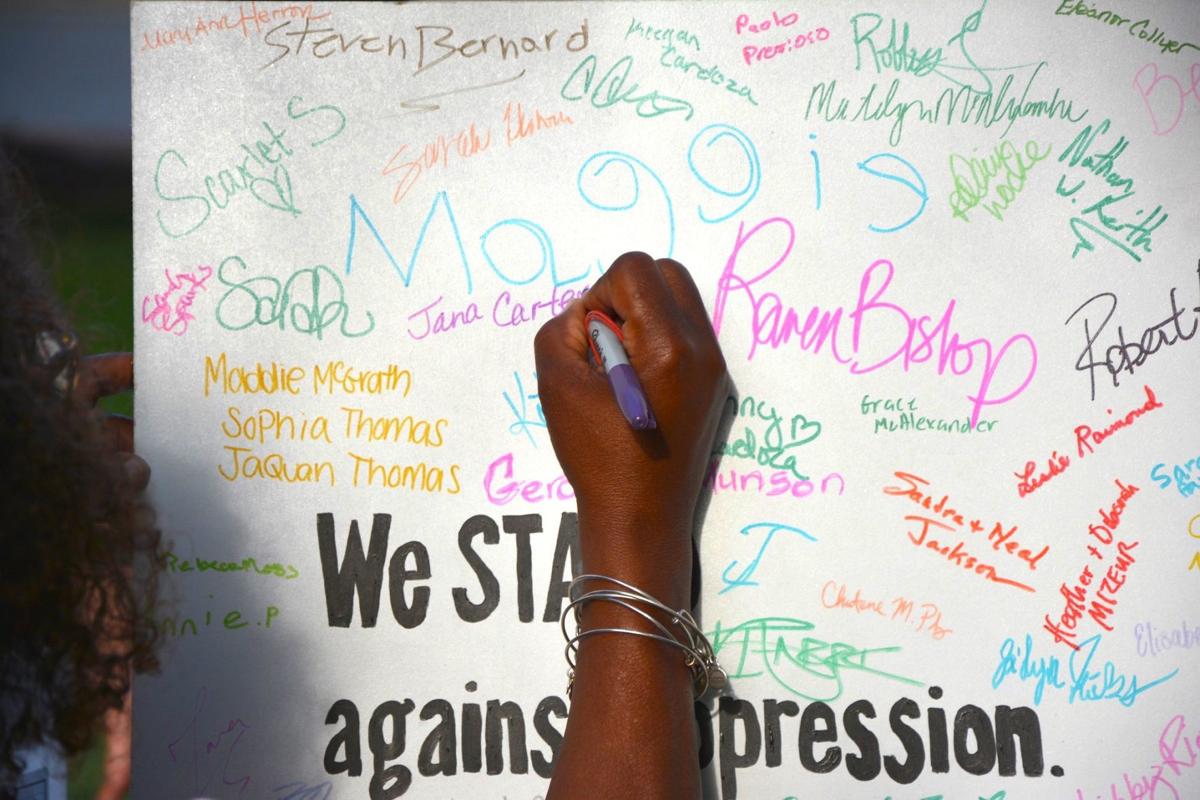 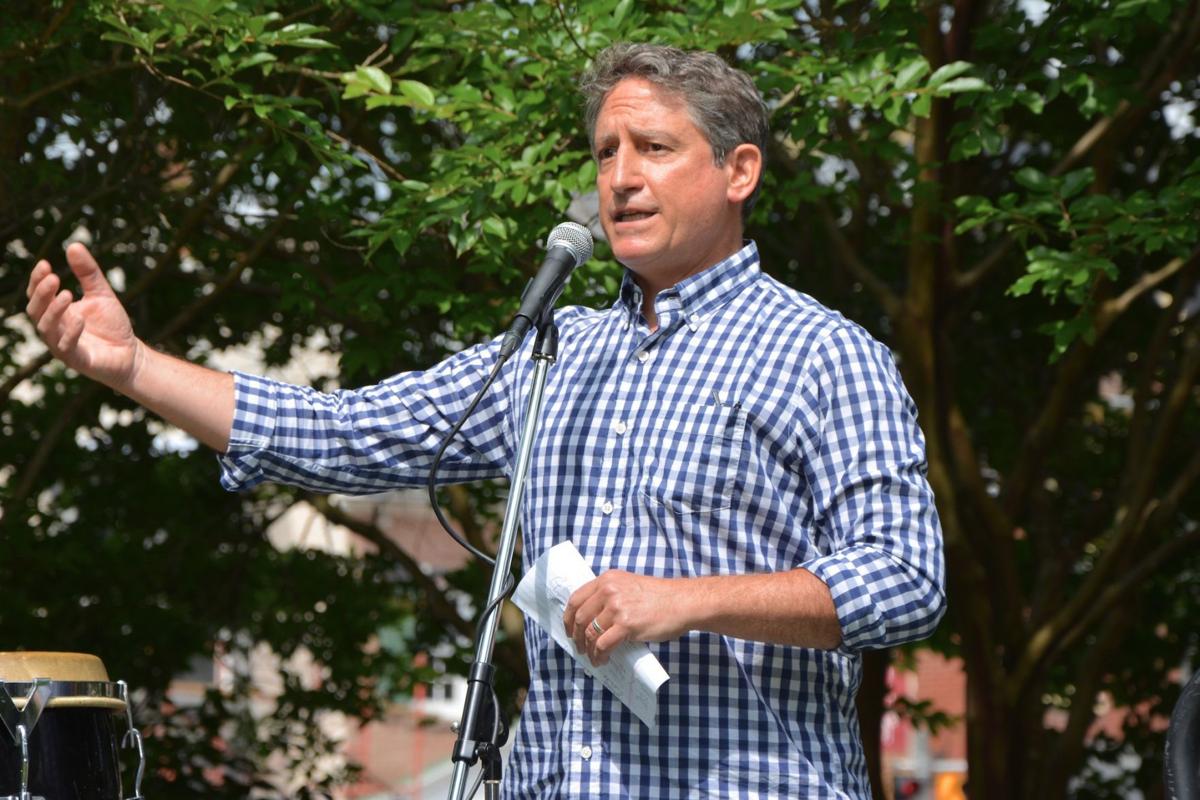 Tyshawn Johnson, a hip-hop dancer and singer who performs as YvngSwag, credits his parents with helping him be the man he has become. “It starts at home ... raise your children right,” he told the audience at the Juneteenth rally in Chestertown.

John Queen is a founder of the newly formed Black Union of Kent County, which hosted the Juneteenth rally in Chestertown on Friday night.

Michael King of Greensboro and his 4-year-old son Bryson.

Devon Elias, who performs as Donny Live, sang and played the keyboard during the “It’s Time for Change” rally Saturday in Chestertown’s Fountain Park. His performance was a tribute to his cousin, Anton Black, who died while in police custody in September 2018.

Whatever the medium, the message was the same during rallies Friday night and Saturday morning in Fountain Park.

It’s been time, for a long, long time, and maybe this time there will be lasting change.

That was the optimistic tone struck Friday night in a Juneteenth rally hosted by the newly formed Black Union of Kent County.

“As a community we can strive to create a new generation of caring decent people, and hold all those who prove otherwise accountable,” said Georgia Rickloff, who identified herself as 21 years old, white and a lifelong county resident.

“I love Kent County and I know we are capable of creating a community where everyone feels safe,” she said.

Rickloff called out Kent County for its injustices, pointing to racist police, business owners and educators.

Her suggestions for righting the wrongs included better school curriculum that does not “whitewash and water down history,” more resources earmarked for youth, and honest conversations among people with diverse backgrounds and differing beliefs.

Rickloff said she was fully certain that Kent County could be changed for the better. “We need to do our part to help,” she said.

“I very much believe in the power of a rallying cry,” said DiGregory, who as chief prosecutor is the county’s top law enforcement official. “We need reformation and transformation and ultimately what we need is systemic change to reverse a systemic national problem of institutionalized racism that can’t be denied by history or recent empirical data,” he said.

An important part of reaching the goal of systemic change is dialogue between community and the justice system, DiGregory said. And not just the black community, which he acknowledged has been underserved and marginalized.

This is our collective problem, he said.

“If we don’t come together as a community and have that dialogue and learn and listen, we won’t get to the type of change that we truly need,” he said.

“This can’t be a moment in time merely,” he added. “This has to go beyond today and into the future. … My office is committed to listening and making sure that systemic change takes place.”

Saturday’s rally, which lasted just about an hour, came with the title of “It’s Time for Change.” A convoy to Annapolis with other Mid-Shore protestors, demanding passage of Anton’s Law and other legislation requiring greater transparency in police matters, was postponed due to the forecast of thunderstorms.

But the opportunity to demand change on the local level was not lost.

Paul Tue, a co-founder of the Social Action Committee for Racial Justice, called on the Kent County Commissioners, mayors and town council members to institute police reforms that include: require officers to undergo training on de-escalation and require de-escalation in all encounters with the public; require officers to immediately intervene and stop excessive force used by other officers and report these incidents directly to a supervisor; require officers to report each time they use force or threaten to use force of any kind against civilians; establish civilian review boards; and reduce funding to law enforcement agencies and divert the funding to community-based programs and services that have a greater impact on crime reduction and improve outcomes for people of color.

The SACRJ also wants to end the use of police as school resource officers in Kent County Public Schools.

Chestertown Councilman Ellsworth Tolliver was the other featured speaker Saturday. He said a civil code is only as strong as the moral code of fairness and equity that stands behind it.

To see change happen, you must be willing to sacrifice, he said.

Tolliver represents the Third Ward, the most diverse of Chestertown’s four wards and the ward with the largest black population.

There are only three people of color who hold elected office in Kent County: Tolliver, Clerk of the Circuit Court Sherise Kennard and Board of Education member Nivek Johnson. They all attended Saturday’s rally.

Music was performed by Bob and Pam Ortiz, Yvette Hynson, Fredy Granillo and Devon Elias, a cousin of Anton Black.

Elias, who performs as Donny Live, sang and played the keyboard. His performance was in tribute to his cousin, a 19-year-old black man who died while in police custody in September 2018.

The audience on Saturday morning was smaller than on Friday night, when more than 200 people gathered in the downtown park to hear John Queen talk about the newly formed Black Union of Kent County and its community mural agreement.

“Let the Town of Chestertown be the place where we as a community make an agreement to stand against oppression, injustice and racism. We stand as a community together,” was Queen’s rallying cry.

The Bayside HOYAS, RiverArts, the James Taylor Lynching Remembrance Coalition and Chesapeake Heartland: An African American Humanities Project were sponsors — in addition to the Town of Chestertown.

Mayor Chris Cerino gave a history of Juneteenth, the oldest nationally celebrated commemoration of the ending of slavery in the United States.

Dating back to 1865, it was on June 19 that the Union soldiers landed at Galveston, Texas with news that the war had ended and that the enslaved were now free. This was two and a half years after President Lincoln’s Emancipation Proclamation, which had become official Jan. 1, 1863.

Cordoza, 13, who identified himself as mixed race, said he had experienced racism firsthand.

Herron, 17, who said her ethnicity includes Asian, said she had been “born privileged enough never to experience overt racism firsthand.”

Jacquet, 23 and white, called out the “abhorrent” behavior of the white community of Kent County. She said it is time for long-term, permanent change.

Beth Dulin read from her poetry, Tyshawn Johnson who performs as YvngSwag talked about how he got his start as a hip-hop dancer and artist, and the Dell Foxx Company band performed two sets.

Perhaps the most powerful statement of the evening came from Gordon Wallace, a product of Kent County’s public schools and a 2019 graduate of Stevenson University.

He said his journey to date could be summarized in one sentence: “I am seeking a life of freedom.”

Ironically, Wallace told the audience, his ancestors would say the same.

“I guess that’s what it means to be ‘black’ in America,” he said.

The pursuit of happiness is a phrase that continuously pops into his head, Wallace said.

“When writing the Declaration of Independence, Thomas Jefferson was accompanied by his household staff, which is a nice way to say his slaves. You have to wonder about the words he wrote, ‘life, liberty, and the pursuit of happiness.’ To me, they represent an undertone in America,” Wallace said. “One man in that room had ‘life’ and one man would be forced to fight for ‘liberty.’ However, each believed in the pursuit of happiness.”

“Those men epitomized how their races would be treated in what would become America,” Wallace said.

On July 4, 1776 the Declaration of Independence was issued and the man who had life was taking his independence. However, we are gathered here on June 19 for the man who was forced to fight for liberty, Wallace said.

Juneteenth is a day for celebration and a day to ask the tough questions. Why is our society this way? Why does equality have to be fought for and not given? Why is so much history left out of classroom textbooks?

Wallace said he believes that education is the key to changing the world. Become informed, encourage curiosity and demand answers. He quoted W.E.B. Du Bois as saying, “Either America will destroy ignorance or ignorance will destroy America.”

Wallace ended with his own words. “Let me leave you with this hundreds of years later from the start of the United States: life is given every day, liberty is perspective based, but pursuit of happiness still lives within a place of hope.”