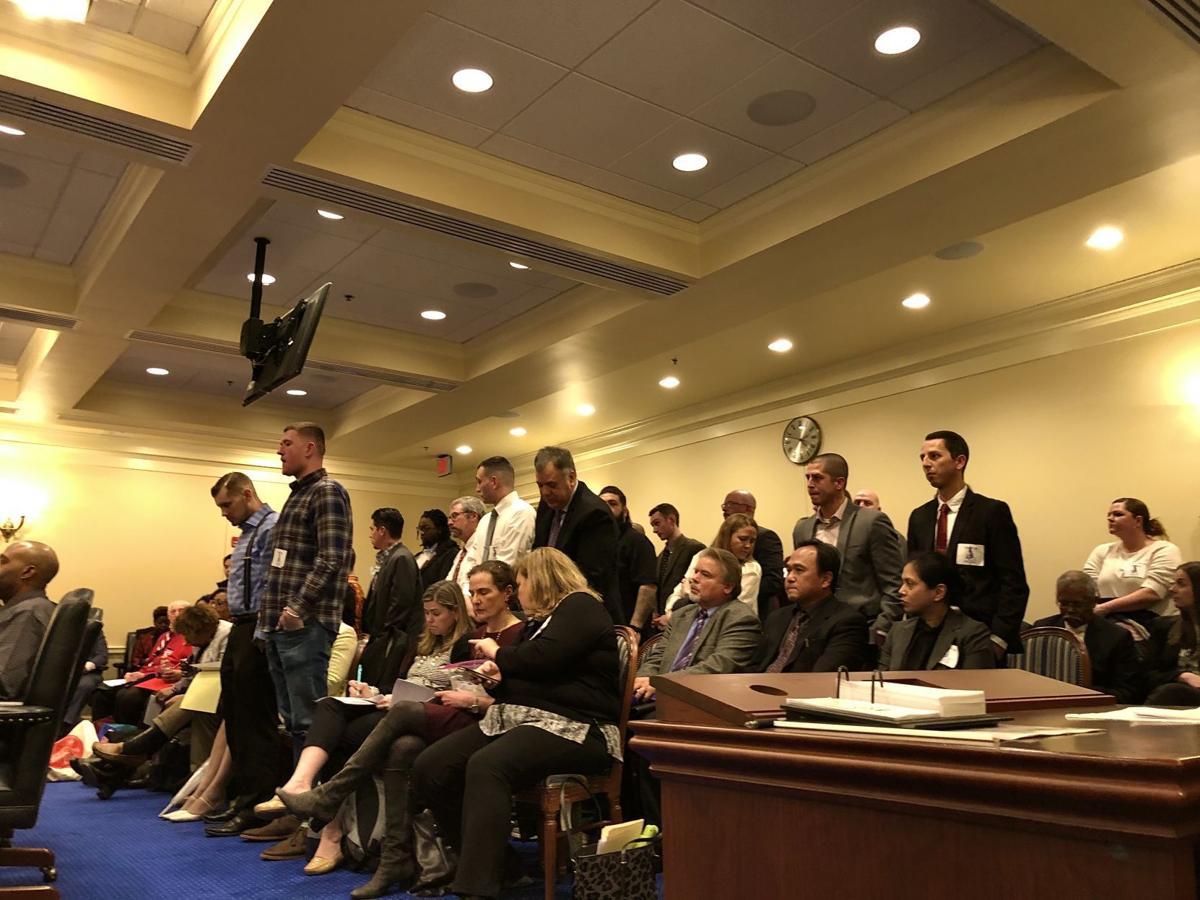 To illustrate how many business owners will be affected by the passage of House bill 3, which seeks to ban flavored tobacco products, Maryland lawmakers prompt vape shop owners to stand during a Feb. 6 hearing on the legislation. 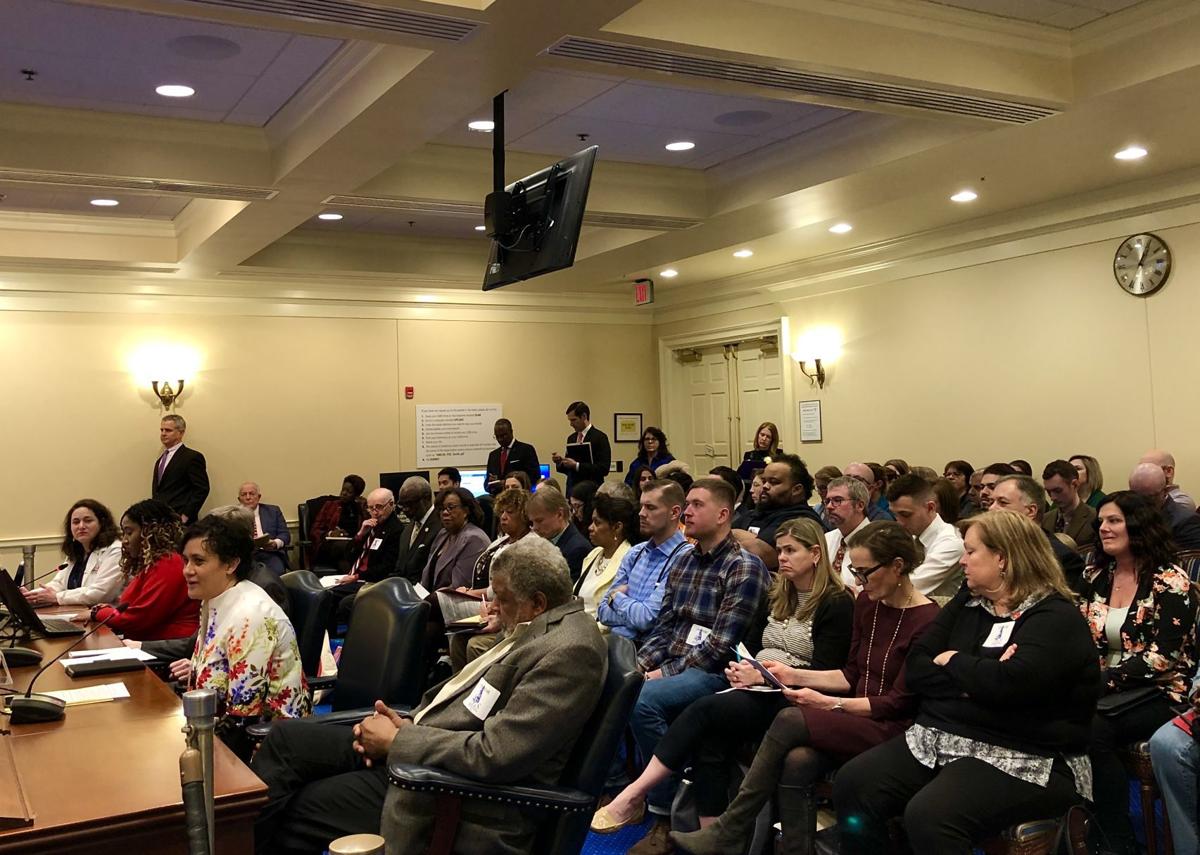 Dozens gather Feb. 6 in Annapolis to testify in front of the House Economic Matters Committee on House bill 3 — controversial legislation that seeks to implement a state-wide ban on all flavored tobacco products.

To illustrate how many business owners will be affected by the passage of House bill 3, which seeks to ban flavored tobacco products, Maryland lawmakers prompt vape shop owners to stand during a Feb. 6 hearing on the legislation.

Dozens gather Feb. 6 in Annapolis to testify in front of the House Economic Matters Committee on House bill 3 — controversial legislation that seeks to implement a state-wide ban on all flavored tobacco products.

ANNAPOLIS — Bills that seek to outlaw the sale of flavored electronic and combustible tobacco products in Maryland have piled on state lawmakers' desks this session — sparking debate among business owners who sell the products, citizens who say the flavors help with smoking cessation, and anti-smoking health experts and parents.

During a hearing Thursday, Feb. 13, the state Senate Finance Committee absorbed a peppering of public comment on two of the bills — similarly-intentioned Senate bills 410 and 233, which are taking aim at flavored electronic-only tobacco products and all flavored tobacco products, respectively.

While proponents' justifications for each bill align with preventing the state's youth from becoming smokers, opponents argued during the hearings that such flavor bans would unfairly strip adult consumers of their ability to decide whether they want to use the products, as well.

Thursday's debates on the two flavor ban bills come on the heels of a Feb. 6 hearing in front of the House Economic Matters Committee for a bill that was cross-filed with SB233 to ban all flavored tobacco products: House bill 3.

Maryland Attorney General Brian Frosh, who testified in favor of HB3 during the Feb. 6 hearing, said, "At this point, almost everyone has seen stories about kids in the hospital with lung illnesses — not because of smoking tobacco, but because of vaping."

Frosh said widespread use of electronic tobacco products among children is an "epidemic," and he attributed a consumption increase among the demographic to the flavors, which he called "very attractive" to kids. There's no mistaking that sellers of the products are "going after children" with flavors such as gummy bear, cotton candy and chocolate, he said.

But opponents of a flavor ban pushed back, saying during the hearing that the state passed a law last year raising the tobacco-buying age to 21 to combat youth tobacco use. The proposed flavor prohibition wouldn't have the youth impact supporters might hope it would, they said.

Candice Gott, a Maryland resident and vape shop owner who testified against HB3 during the Feb. 6 hearing, said the flavor ban bills show "a true lack of understanding" for the vaping industry.

Gott said when she started smoking in her teens, the flavor was called "whatever I could get my hands on," adding that kids try smoking because they're curious.

"Are we also going to ban curiosity?" she asked the committee members.

Others who argued against the legislation alongside Gott offered reasons such as a negative economic impact, because people simply would cross state lines to buy the flavored products. Maryland would miss out on sales tax revenue, and the state's local businesses that rely on the sales would crumble, they said.

Aside from an economic hit, though, opponents raised a freedom-of-choice issue, saying, "If you're 21 or above, you should have the freedom to smoke whatever you want to smoke." If the state wants to cite youth health concerns to justify a flavor ban, they said, it should ban all tobacco products.

Sen. Steve Hershey, R-36-Upper Shore, who is on the Senate Finance Committee, appeared to not yet be sold on the proposed flavor bans. Hershey offered criticism of the legislation, saying during Thursday's hearing, "This bill is so much broader than it seems to be in the testimony."

"I understand the children part ... but I'm talking about the adult part of this now," he said after asking whether the ban would apply to flavors commonly added to cigars. "I think we took a big step last year with tobacco 21, and now we're talking about adults and the cigar industry."

It was clear, though, that those who were on the fence about a proposed flavor ban rallied around the idea that something needed to be done to curb youth smoking. Some offered possible amendments to the legislation, such as increasing the penalty for illegal sales to kids or even penalizing children who use the products.

Despite the apparent kinks in the flavor prohibition bills, Frosh urged the lawmakers to push it forward, saying, it's "not going to cure the whole problem, but it’s a step in the right direction (because) it will reduce the number of children smoking these products."

"Yes. These products will be available somewhere somehow, but the tougher we make it the better," Frosh said, adding, "We can’t afford to allow another generation of Americans to become addicted to nicotine."