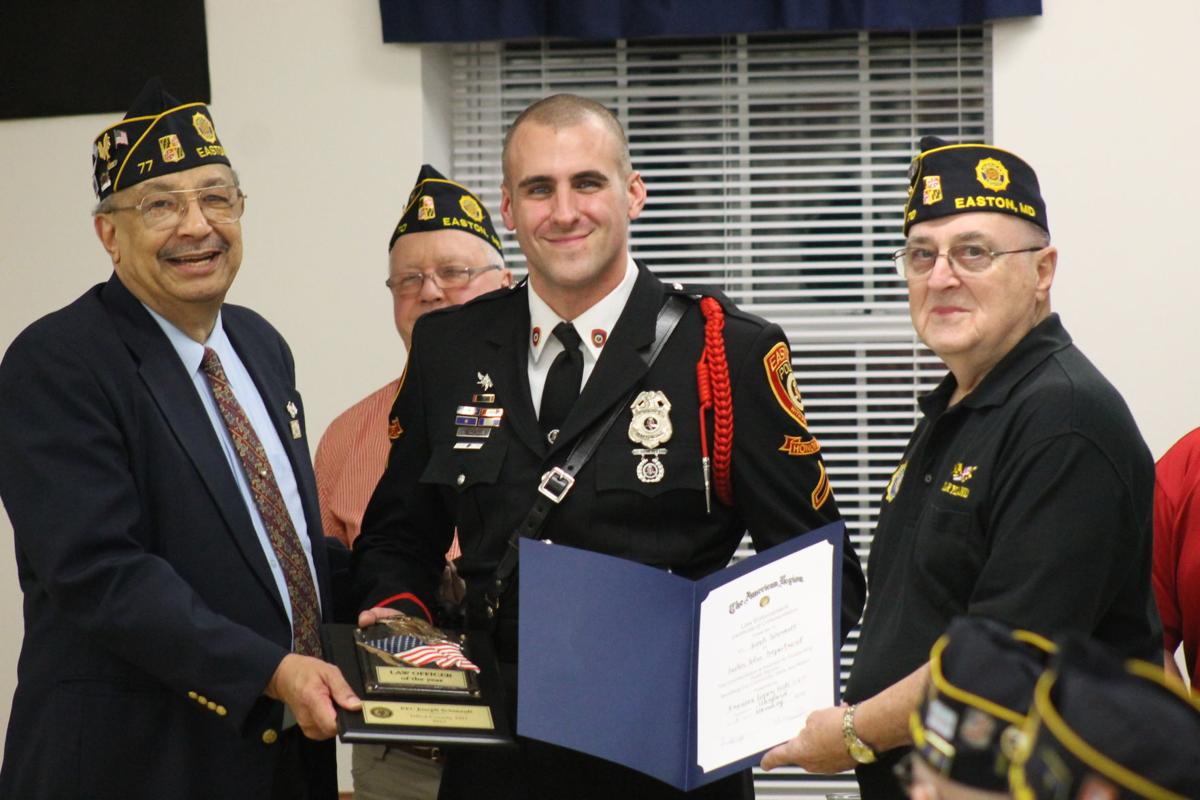 Pfc. Joseph Schinault, center, was recognized for his work in the community on Wednesday, Feb. 19, at American Legion Talbot Post 70 in Easton. 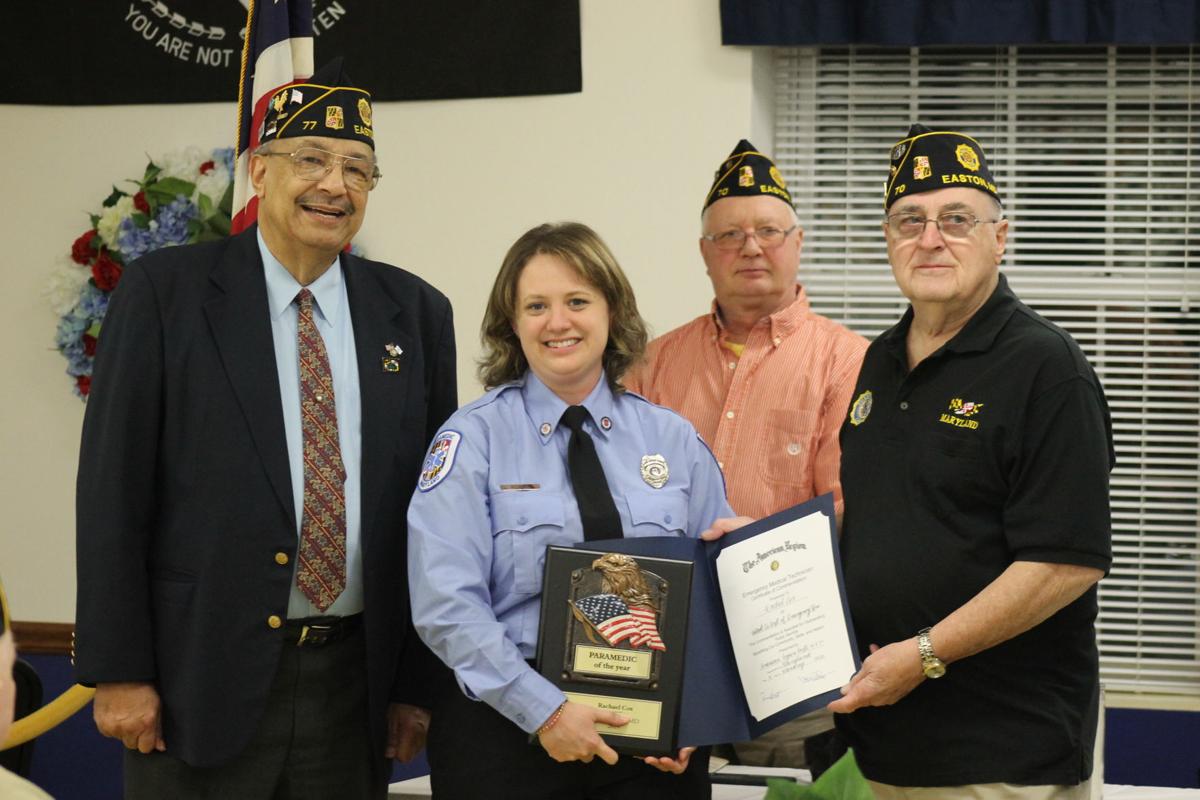 Paramedic Rachael Cox, center, was recognized for her work in the community on Wednesday, Feb. 19, at American Legion Talbot Post 70 in Easton. 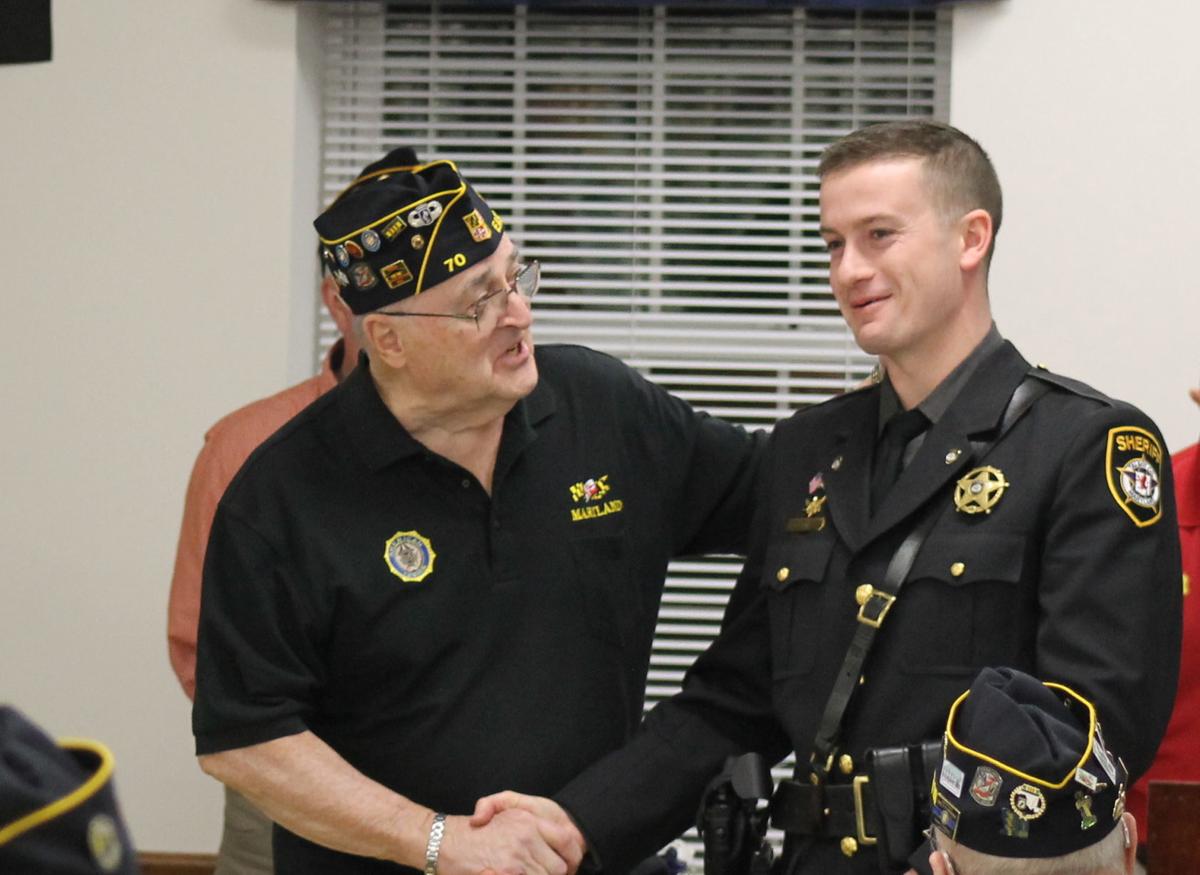 Dfc. Logan LeCompte, right, was recognized for his work in the community on Wednesday, Feb. 19, at American Legion Talbot Post 70 in Easton.

Pfc. Joseph Schinault, center, was recognized for his work in the community on Wednesday, Feb. 19, at American Legion Talbot Post 70 in Easton.

Paramedic Rachael Cox, center, was recognized for her work in the community on Wednesday, Feb. 19, at American Legion Talbot Post 70 in Easton.

Dfc. Logan LeCompte, right, was recognized for his work in the community on Wednesday, Feb. 19, at American Legion Talbot Post 70 in Easton.

EASTON — Two first responders were honored for their dedication to the community on Wednesday, Feb. 19, at American Legion Talbot Post 70.

Post 70 and Blake-Blackston Post 77 joined together to name Pfc. Joseph Schinault from the Easton Police Department as “Law Officer of the Year” and Paramedic Rachael Cox from Talbot County Department of Emergency Services as “First Responder of the Year.”

Schinault has been with the Easton Police Department since 2012. He is part of a K-9 team with his dog, Murph. He said he always has wanted to be a police officer.

Schinault grew up in Centreville but has made Easton his home.

“Being a member of the community while working in its law enforcement means a lot,” he said. “The things that people in Easton deal with, they’re also personal to me.”

“He has done an outstanding job for us,” Spencer said. “It really means a lot that our law enforcement officers are recognized for the work they do in the community.”

Cox has been a paramedic with Talbot County DES since 2016. In her nomination letter, she was praised for her commitment to her fellow paramedics and the organization. She provides training to new paramedics, serves as a clinical field instructor for Chesapeake College and acts as an advanced cardiac life support instructor.

Cox also was praised for her dedication to the community. She offers CPR training and assists with Talbot County DES Community Emergency Response Team training.

Cox worked to bring the Stop the Bleed program to Talbot County. The program provides training and information to anyone in the community who may need to step in and provide medical assistance until first responders can arrive. Because of her dedication to the program, Cox has been appointed as the Maryland state coordinator of the National Stop the Bleed program.

“I love being a part of the Talbot County community,” she said. “Training the community and serving them in general is a big passion of mine.”

“Rachael has done an exemplary job since she’s been with us,” LeCates said. “She consistently goes above and beyond. The only reason that Talbot County has Stop the Bleed is because Racheal came into my office one day and said, ‘I want to do this program, I should be able to do it.’”

Cox will start a Stop the Bleed program for Talbot County residents later this year.

Dfc. Logan LeCompte of the Talbot County Sheriff’s Office also was recognized at the ceremony for his dedication to the community.

“He has done his part taking drugs off the streets,” Bollinger said. “He leads the office in drug arrests every month for the whole year. He’s making highways safe. Everything he does is for the safety of the citizens of Talbot.”