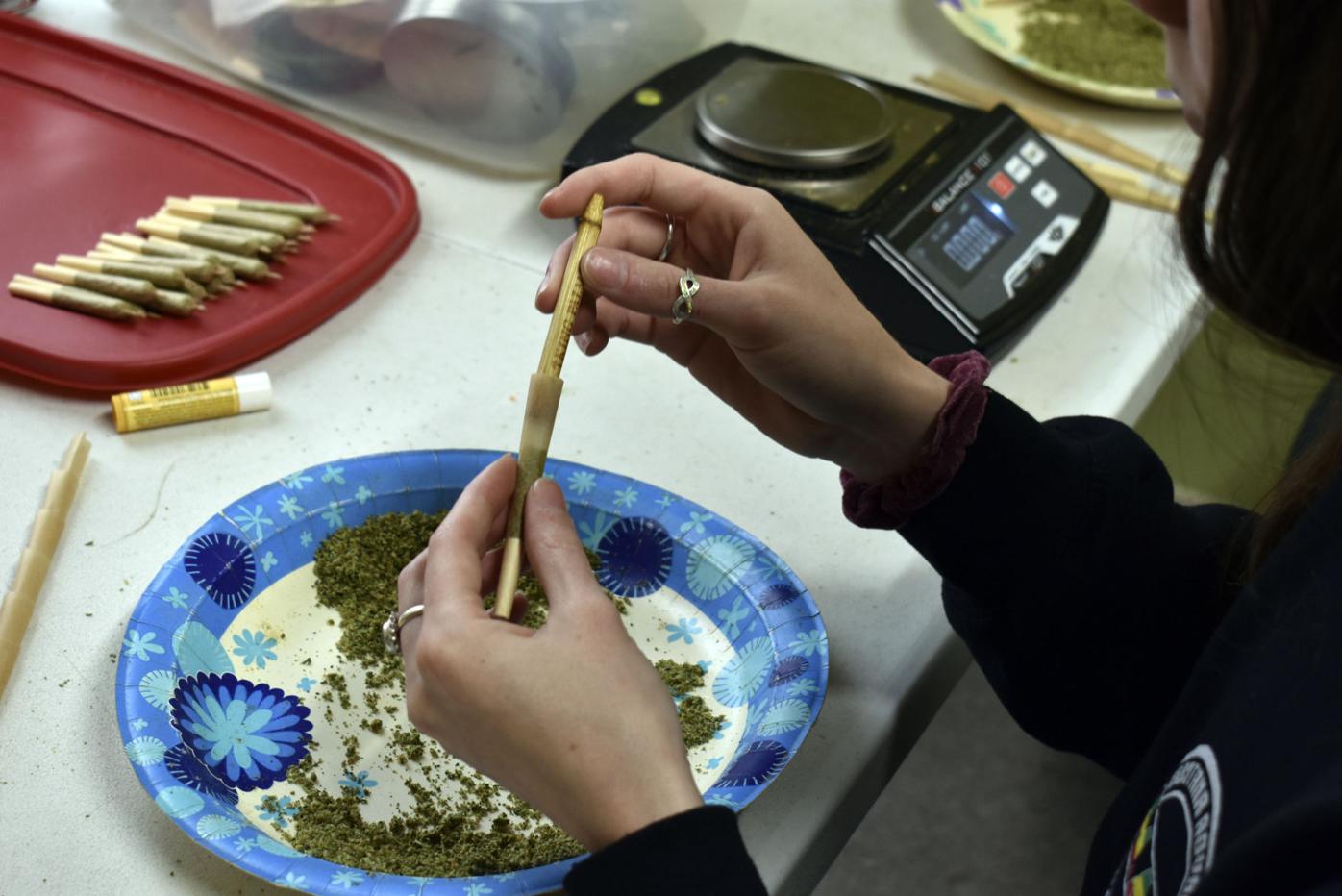 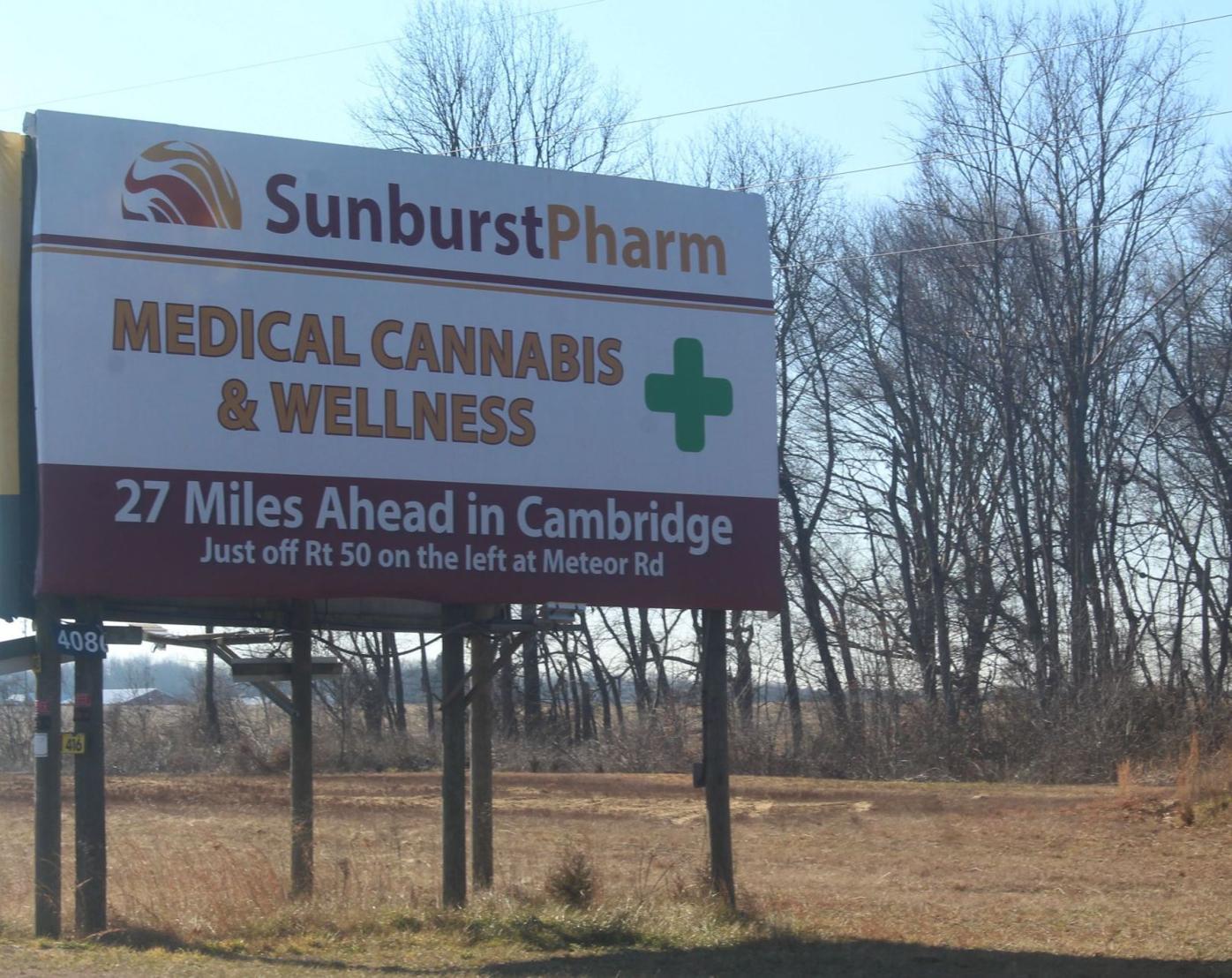 A billboard advertising Sunburst Pharma, a dispensary in cambridge. Patients have been complaining about delays with obtaining their medical marijuana card from the Medical Marijuana Cannabis Commission. 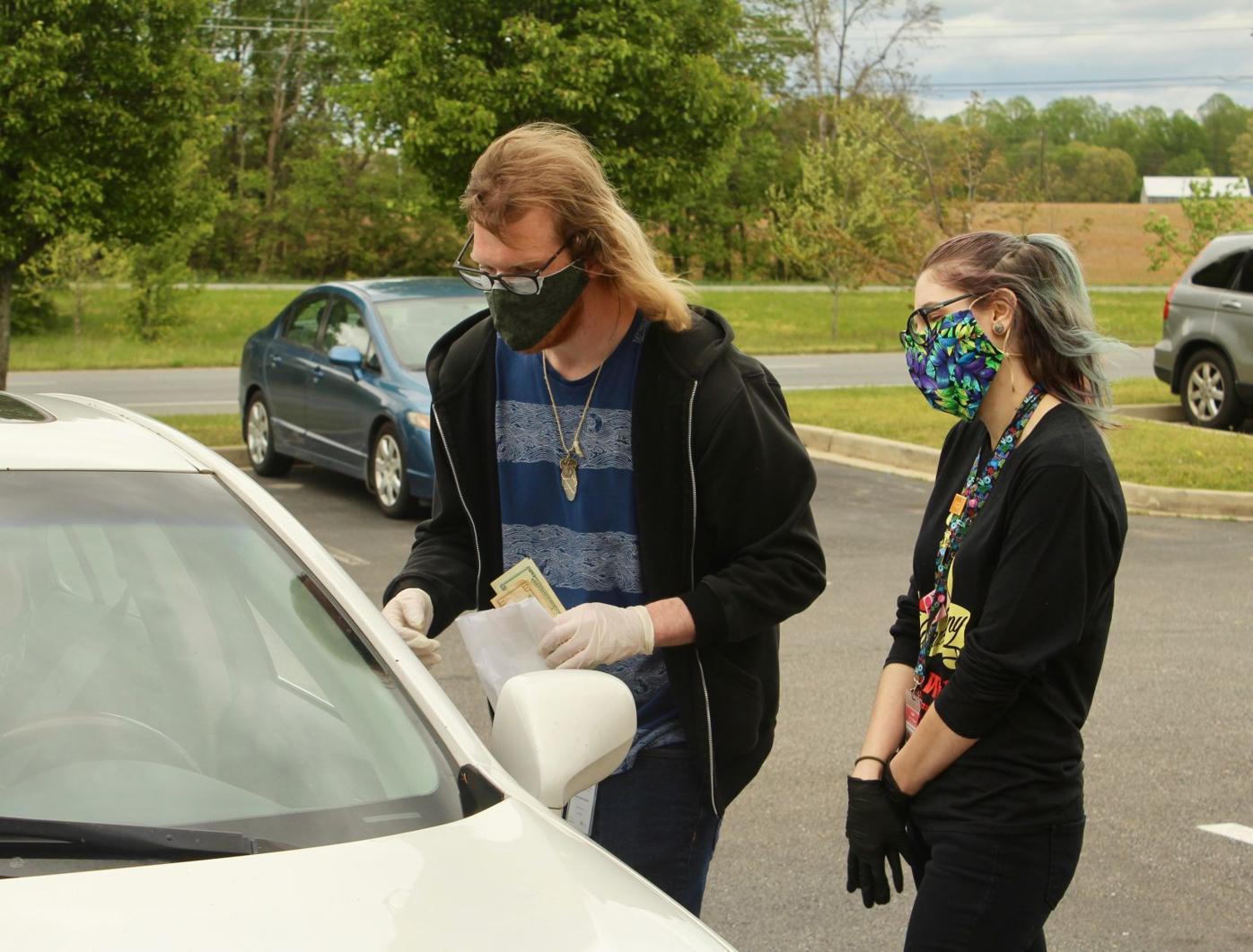 Daniel Emery, left, and Samantha Carpenter, employees at Southern Maryland Relief Medical Cannabis Dispensary in Mechanicsville, deliver a patient’s order to their car in 2020. The medical cannabis industry has been overwhelmed statewide during the pandemic. 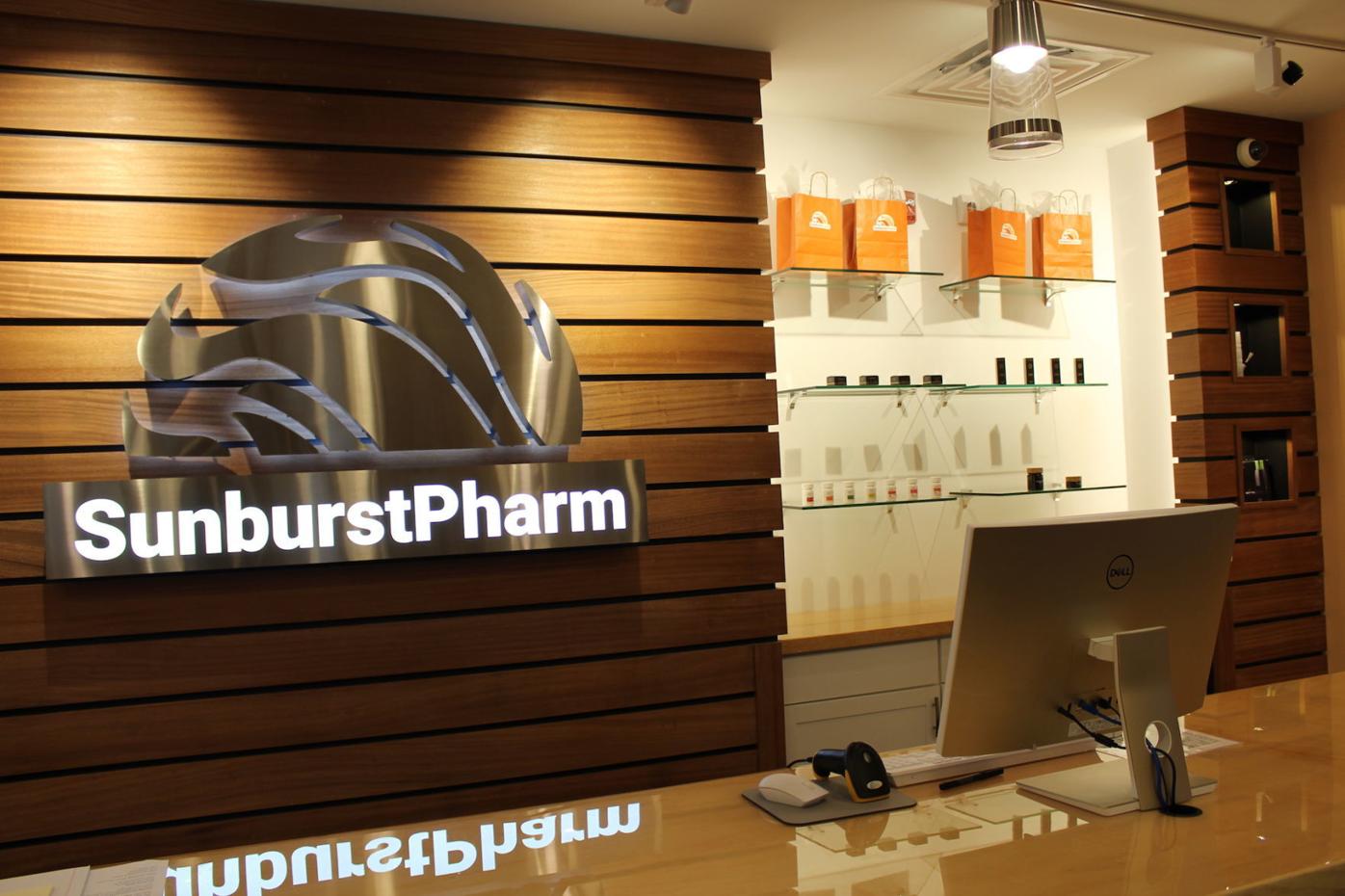 Sunburst Pharm says patients are purchasing medical cannabis in skyrocketing numbers at their dispensary in Cambridge.

A billboard advertising Sunburst Pharma, a dispensary in cambridge. Patients have been complaining about delays with obtaining their medical marijuana card from the Medical Marijuana Cannabis Commission.

Daniel Emery, left, and Samantha Carpenter, employees at Southern Maryland Relief Medical Cannabis Dispensary in Mechanicsville, deliver a patient’s order to their car in 2020. The medical cannabis industry has been overwhelmed statewide during the pandemic.

Sunburst Pharm says patients are purchasing medical cannabis in skyrocketing numbers at their dispensary in Cambridge.

CAMBRIDGE — For months now, business has been especially good at Sunburst Pharm, a medical cannabis dispensary in Cambridge.

Since marijuana was approved for medicinal use statewide in 2014, the dispensary has always sold product well, cashing in on a cannabis industry projected to be worth $73.6 billion globally by 2027, according to Grandview Research.

But after the COVID-19 pandemic disrupted ordinary life in March 2020, new patients are enrolling through the state at skyrocketing numbers and sales have jumped tenfold at Sunburst Pharm.

That surge can be seen across Maryland, which is seeing retail sales far above neighboring states — and it’s overwhelming the industry.

It has led to some supply chain issues, and the record-setting numbers are also leading to backlogs and delays at the Maryland Medical Cannabis Commission, which regulates and oversees medical marijuana in the state. The MMCC is struggling to process and approve applications and distribute medical cards.

Michael Dunaway, the general manager of Sunburst Pharm, called the past few months a “really steady increase” in new patients, reporting 10 to 12 of them pouring in to Sunburst Pharm every day — at a time when he usually only serves a few.

And many of the patients are expressing concerns to Dunaway about ridiculous delay times in getting approved through the MMCC.

Immediately upon submitting an application online, patients get a message from the MMCC saying there is a “high volume” period.

“The Commission is experiencing an influx of applications, emails and calls, therefore your application will take longer to process,” it reads. “The Commission will not be responding to emails with status inquiries.”

Dunaway at Sunburst Pharm said new patients are finding the MMCC system complicated, and it is “much more difficult to get approved in a timely manner,” leaving them “exasperated” by the time they get to Sunburst Pharm.

The manager is hearing “consistently” from newly enrolled patients, who say they are waiting six weeks or longer to get a medical card from the MMCC — when it was just three or four weeks before the pandemic.

The process has always been a complex bureaucratic system, with patients having to register through the MMCC, get a recommendation from a doctor or provider, then wait for a medical card to come in the mail. It’s all done virtually, too, and MMCC employees are working largely from home. But applications are taking longer and longer to get approved.

“COVID just compounded an already existing problem and made it more difficult to process applications efficiently,” Dunaway said. “With mandates (for employees) to stay home, it’s destructive to the process. The cards themselves are a whole other layer of delays — certain patients don’t (even) receive their card.”

David Torres, a spokesperson from the MMCC, said he was not aware of any backlogs or delays approving applications or cards, but he pointed out the fact that once approved, a patient has an ID they can print out and bring to a dispensary.

But Dunaway said the online system is not that clear-cut for patients to navigate.

”A lot of customers don’t realize they have an online portal,” he said. “The state is not set up in a way to filter or assist with those technical hurdles.”

Dunaway said he spends a fair amount of time printing out MMCC recommendations or ID slips for patients because they are “confused on how to get to that point.”

Patients also have to renew licenses after two years, and some up for renewal now are joining the inundated backlog. Dunaway explained that those customers are already familiar with the bureaucracy of the system, calling it a “rite of passage.”

“Everyone has to go through this DMV-like process,” he said, referring to the Division of Motor Vehicles, which is notorious for long delays.

More and more Marylanders are turning to marijuana for its medicinal benefits in the wake of the coronavirus which has killed nearly 400,000 people in the U.S. and has forced restrictions on daily life.

The coronavirus has led to increased anxiety and mental health concerns, according to the Centers for Disease Control and Prevention, which reported that “symptoms of anxiety disorder and depressive disorder increased considerably in the United States during April–June of 2020, compared with the same period in 2019.”

Around 40% of adults in the country struggle with mental health or hard drug addiction, the CDC said. Medical marijuana can be approved for patients for a range of benefits, from anxiety to chronic pain.

Dunaway pointed to COVID-19 and all the intense political news surrounding the election as drivers for the uptick.

“A lot of people use cannabis to help fight depression and anxiety, and heaven knows 2020 and 2021 are filled with moments that create those feelings,” he said. Marijuana “helps them through those times.”

With many now working from home, that creates more opportunities, too.

As of Jan. 11, exactly 124,118 people are currently enrolled as patients through the MMCC. Across the Mid-Shore, there are 6,606 registered patients.

But in 2020 those numbers were increasing at higher and higher rates toward the end of the year, jumping from just over 115,000 to roughly 121,000 from October to the end of November, with that rate increasing as thousands more enrolled through January 2021.

As the pandemic worsens during a bleak winter season, it’s expected for the numbers to continue an upward swing, potentially beleaguering the MMCC system more.

At the Ash & Ember dispensary in Centreville, patients are “constantly enrolling” through the MMCC and then flooding in to purchase medicinal marijuana, said Ashley Herr, the owner.

“There’s tons of new people all the time,” she said. “Everyday we got new patients coming in.”

She attributed the surge to people working from home, but also to the legalization of marijuana in states across the country. 2020 was a record season, with Arizona, Montana, South Dakota and New Jersey all legalizing marijuana recreationally.

Only 15 states have laws making marijuana illegal, and polls show about two-thirds of Americans support legalization, a far cry from twenty to thirty years ago when most people opposed it.

Besides medicinal benefits, marijuana legalization reduces long-standing problems with the justice system: there are disproportionate arrests of minorities in the country for cannabis possession, even when both Black and White people use it at the same rate.

Herr from Ash & Ember said the 2020 election results were a “great thing considering the opioid epidemic,” too. The epidemic has killed about 400,000 Americans addicted to painkillers and has worsened during the coronavirus pandemic.

“People are turning to cannabis,” she said. “Normalizing it is fantastic (because) we’re trying to have people not think it is funny or strange or stigmatized.”

In retail sales, Maryland is outperforming nearby states on the East Coast, revealing skyrocketing demand and some supply chain delays.

Maryland is expected to have earned $450 million in 2020, an astronomical increase from about $241 million in 2019. Massachusetts, the next highest in medicinal sales on the East Coast, reported a projection of $220 million for 2020, according to the MMCC annual report.

Maryland brought in almost $11 million in tax revenue in 2020 because of the sales boost, but concerns are now being raised over whether there is adequate supply to meet demand.

Only 22 growers are licensed in the state, and both Sunburst Pharm and Ash & Ember reported a hard time securing a stable line of product, with a particular strain on the most popular form of marijuana congestion — flower.

“The amount of medical cannabis cultivated and dispensed increased significantly over the second half of the year,” said Torres from the MMCC. But “a market analysis performed on behalf of the MMCC in 2020 determined there is an adequate supply of cannabis to meet existing patient demand.”

That stands in contrast to Herr and Dunaway, with Sunburst Pharm in particular saying some customers have had to get different strains of marijuana flower because of the supply issue.

But both dispensaries are not turning customers away and have still served every patient. Supply issues could get worse if the trend continues through the winter.

At Ash & Ember, Herr is just trying to stay positive. The owner has pivoted to home deliveries and curbside orders at her small shop during COVID. Dispensaries were considered essential businesses back in March and allowed to stay open, but employees are taking extra precautions to stay safe and open.

Herr said business is good — really good — and even though there are some delays, she is just trying to keep the shelves stocked.