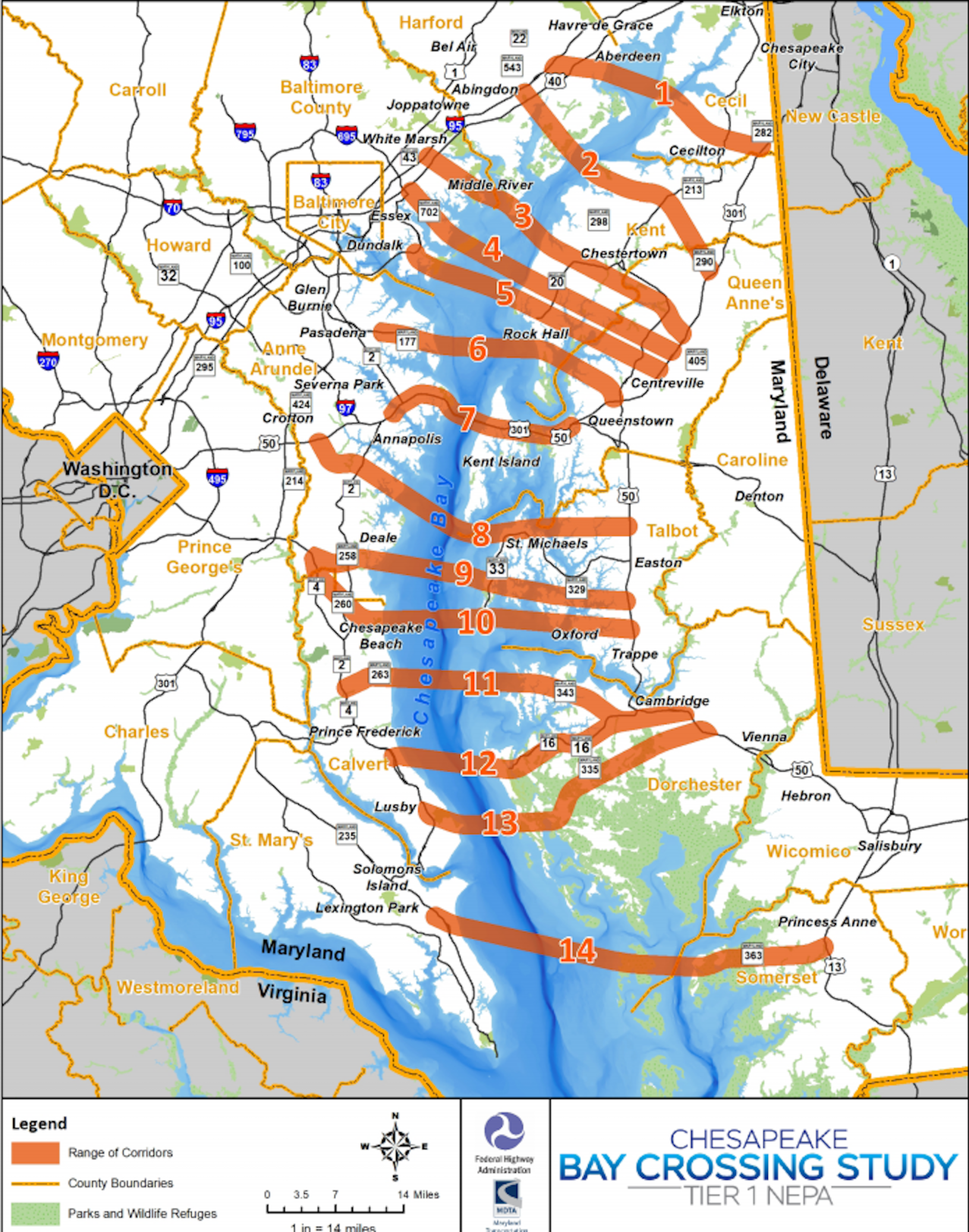 The Maryland Transportation Authority has identified 14 possible locations for a new bridge or bridge-tunnel across the Chesapeake Bay. 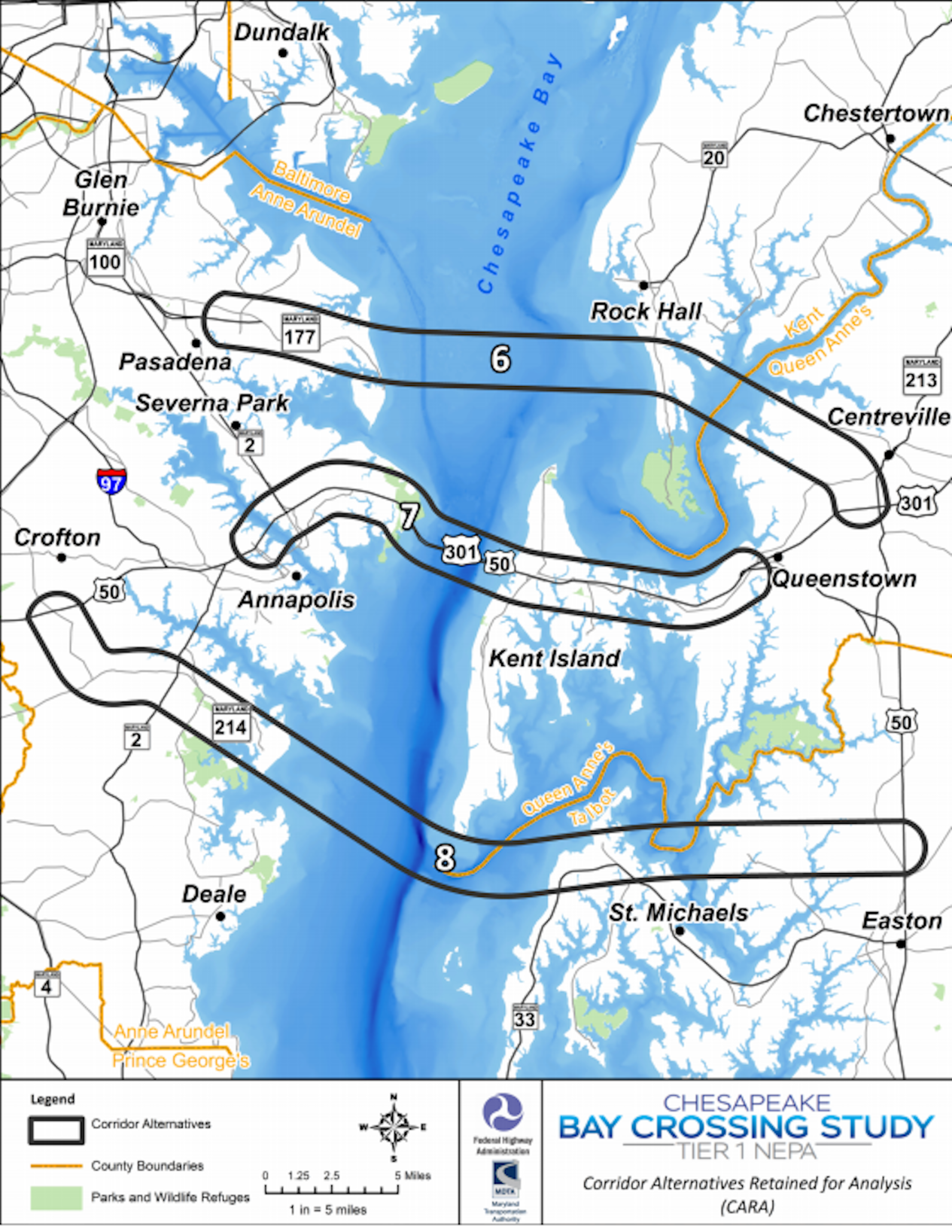 Maryland Transportation Authority says Corridor 7 is the best pathway. That pathway includes building a third bridgeway near the current Bay Bridge and over to Kent Island.

The Maryland Transportation Authority has identified 14 possible locations for a new bridge or bridge-tunnel across the Chesapeake Bay.

Maryland Transportation Authority says Corridor 7 is the best pathway. That pathway includes building a third bridgeway near the current Bay Bridge and over to Kent Island.

BALTIMORE — The Maryland Transportation Authority released its first study Feb. 23 on its bay crossing initiative, narrowing down the potential pathways for a new crossway over the Chesapeake Bay.

MDTA’s preferred method is building a bridge or a bridge-tunnel near the existing Bay Bridge, following U.S. Route 50 and landing at Kent Island, according to the study.

MDTA has examined a new crossing method for the past several years in an effort to reduce traffic on the Bay Bridge. The Tier 1 Draft Environmental Study is the first step toward picking a final crossway. A second study will be drafted after collecting feedback from the public on the first one.

MDTA, which is collaborating on the project with the Federal Highway Administration, is encouraging public comment on the study, which can be viewed at: baycrossingstudy.com.

Public comment can also be submitted at the website. Live public hearings will be held in April.

In the study, MDTA says traffic congestion on the William Preston J. Memorial (Bay) Bridge, which was first constructed in 1952, is quickly becoming a danger and a burden to travelers.

“Increased use of the Bay Bridge over the years has meant that daily commuters, regional travelers, truck freight operators, and vacationers have experienced increased congestion, often struggling to reach their destinations with low confidence in travel times,” MDTA wrote. “Aging infrastructure, capacity limitations at the existing bridge, and an increasing demand for trips across the Bay will continue to exacerbate the congestion and delays that travelers currently experience.”

The agency initially explored creating a busing system, building a rail transit or even establishing a ferry system to bring people across the Bay without building a new road or bridge system. In the study, MDTA says those are not feasible options.

MDTA has now pivoted toward building a bridge and roadway network at 14 possible pathways across the Bay, with proposed locations stretching from St. Mary’s to Somerset in the south and Harford to Cecil County up north.

In the study, MDTA has narrowed its preferences down to three corridor pathways, but is keeping the no-build option on the table.

The three pathways MDTA has identified include:

Corridor 6, with MD 177 tying into MD 100 on the Western Shore and expanding to US 301 on the Eastern shore and into Centreville

Corridor 7, to be built parallel to the existing Bay Bridge on U.S. 50 East, eventually stretching into Kent Island

“The study’s traffic models indicate that building a third crossing within the same corridor as the existing Bay Bridge — Corridor 7 — would have the most positive impact on reducing traffic,’ said MDTA Executive Director Jim Ports in a press release.

Corridor 7 also has the least environmental impacts if a bridge were to be built there. Still, it’s located near more than 9,000 acres of critical areas on the Chesapeake Bay. Thousands of acres of fish habitats and forest lands are also within the area and would be impacted.

A more detailed environmental impact study will be released this winter, MDTA says.

If it chooses one of the corridor routes, MDTA would build either a bridge or a bridge-tunnel.

Toll prices range from corridor to corridor, with Corridor 6 having the lowest rates and Corridor 8 having the highest. All rates are more expensive for a potential bridge-tunnel.

It could cost as much as $18 to cross the bridge-tunnel at Corridor 8, but it’s only a $5 fee when crossing a standard bridge built at Corridor 7.

Traffic on the Bay Bridge has increased exponentially over the years, with the number of vehicles crossing each year soaring from under 5 million in 1952 to more than 25 million in 2018, MDTA reported.

While the Bay’s first bridgeway was constructed in 1952, the one parallel to it was built in 1973 to handle the additional traffic.

But the number of average weekday vehicles crossing the Bay Bridge is expected to increase 22% by 2040.

“Throughout the years, as travel across the Bay has become more common, employment centers have also become more accessible to residents of both shores (and) summer vacations along the coast have turned into household norms,” MDTA wrote.

Crashes in and around the Bay Bridge rank at 49.3 crashes per 100 million vehicles, which is higher than the 39 per 100 million average on all other Maryland expressways.

MDTA says it needs the additional capacity of a third bridgeway to better handle accidents, which can easily snarl up traffic on the Bay Bridge.

Gov. Larry Hogan first ordered this study in 2016 because of traffic congestion.

If you have a concern, opinion or statement to make about the new Bay Bridge study, we would love to hear from you. Please contact Brad Dress at 410-463-9883 or bdress@chespub.com.