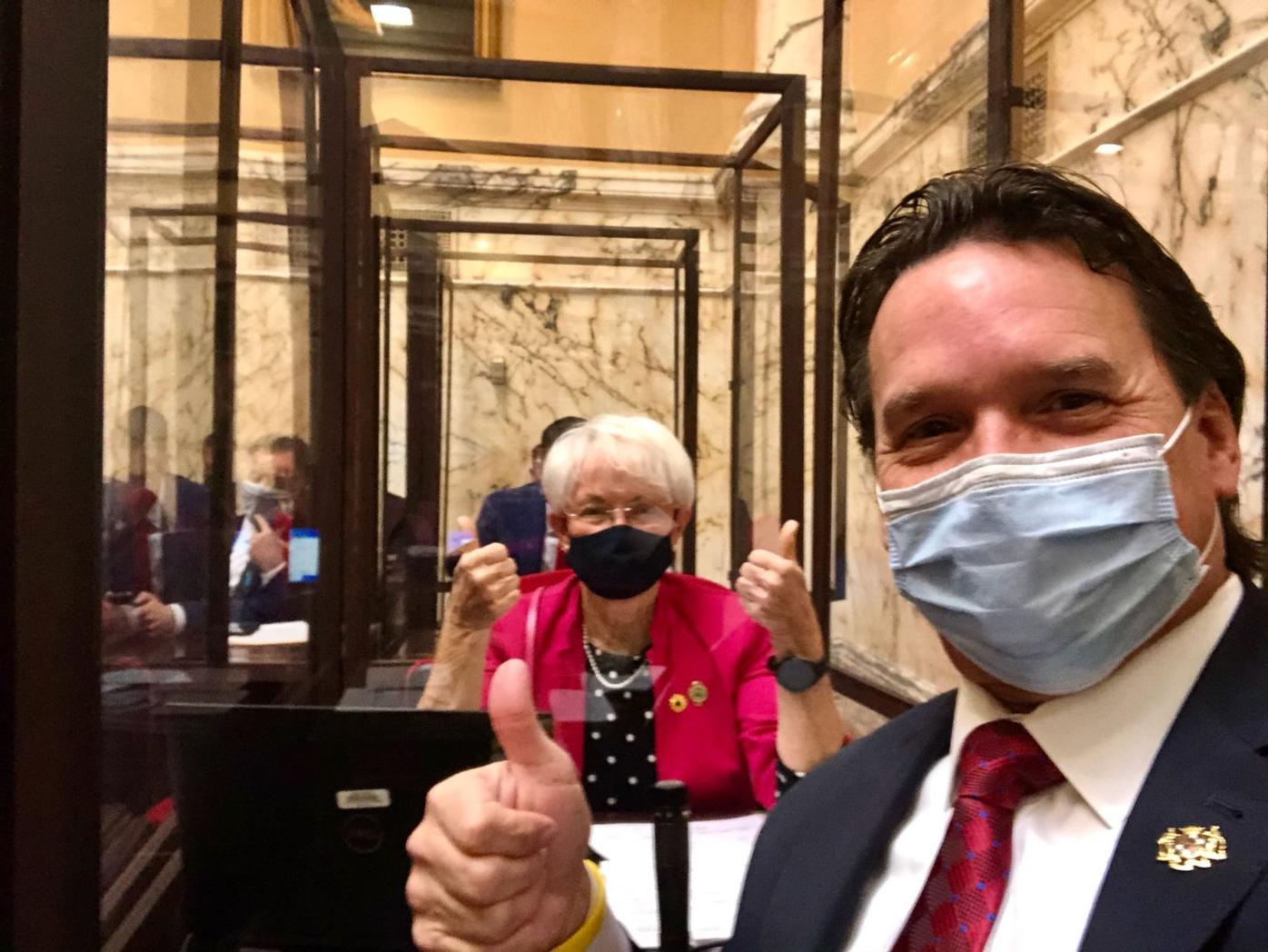 From left: Sen. Addie Eckardt, R-37-Mid-Shore, and Sen. Steve Hershey, R-36-Upper Shore, sit in plastic booths in the Maryland Senate on the General Assembly’s 2021 opening day amid the coronavirus pandemic. 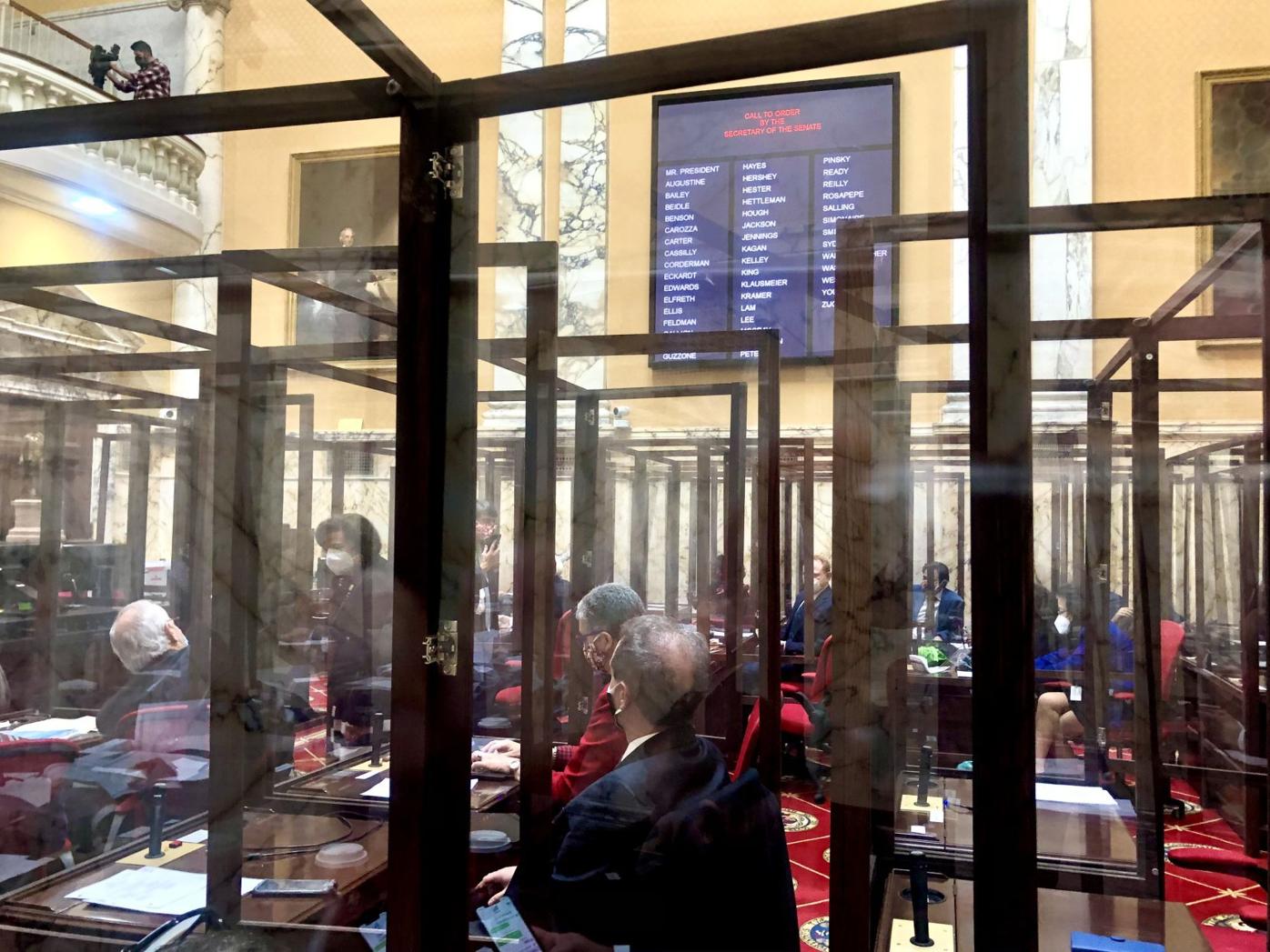 Maryland state senators, separated by plastic dividers to prevent coronavirus spread, convene for the legislative assembly’s first day of the 2021 session on Jan. 13 in Annapolis.

From left: Sen. Addie Eckardt, R-37-Mid-Shore, and Sen. Steve Hershey, R-36-Upper Shore, sit in plastic booths in the Maryland Senate on the General Assembly’s 2021 opening day amid the coronavirus pandemic.

Maryland state senators, separated by plastic dividers to prevent coronavirus spread, convene for the legislative assembly’s first day of the 2021 session on Jan. 13 in Annapolis.

ANNAPOLIS — Wednesday marked the start of an unusual legislative session for Maryland’s General Assembly in Annapolis, with state senators isolated in transparent booths and capacity limited in the chambers to thwart the coronavirus.

What normally would be a bell-ringing, packed-house celebration of the General Assembly’s opening day at the State House was a more subdued affair this year.

The lawmakers were taking in the changes. The day would typically see a great deal of congregating, handshaking, chatter and television interviews being conducted in packed rooms and hallways. There was little to none of that at the State House on Wednesday.

The Senate set up plastic shields for individual members in lieu of distancing its members. The House of Delegates kept members six feet apart and only invited 80 delegates into the chamber to sit in on the business of opening day.

Del. Johnny Mautz, R-37B-Talbot, said the invited members were selected in a lottery and he was not one of them. Mautz and about half of the 141 state delegates are expected to convene in a chamber annex this session for full-floor meetings.

While the circumstances were odd, even for a society that has been coping with changes related to the pandemic for nearly an entire year, the lawmakers got adjusted quickly and were able to take care of some procedural business.

From their “penalty box-style pods,” as Sen. Steve Hershey, R-36-Upper Shore, called them, the group of about 50 Senators voted to reelect Sen. Bill Ferguson, D-46-Baltimore City, as Senate president.

Before Jones approached the podium to address the members on Wednesday, the clerk announced that there would be a pause for the podium to be sanitized. Jones did not give a speech but said, plainly, “We’ve got the people’s business to do, so let’s get started.”

Of the increased cleaning measures and 360-degree plastic partitions around each senator, Hershey said it was “very confining, almost uncomfortable.”

“I found it difficult to communicate with my colleagues sitting right next to me or behind me,” Hershey said. Though he said he understands it’s best “under the extraordinary conditions.”

Despite sanitation and distancing having noticeably intensified since the assembly adjourned early in 2020 when the pandemic hit Maryland, one thing looked relatively the same: the police presence inside and outside of the State House.

In light of President Donald Trump’s supporters’ recent storming of the U.S. Capitol and subsequent warnings of similar unrest at state capitals, there was an expectation that security might be heightened on opening day in Annapolis.

Only a few police vehicles idled outside of the building. Inside and at the doors, there was what seemed like a regular security presence compared to past years.

Del. Steve Arentz, who represents Queen Anne’s County and heads the Eastern Shore Delegation, said in an interview Wednesday afternoon he didn’t see anything that alarmed him in terms of police attendance either at the State House or across the street at members’ office buildings.

“I did see there were some police cars, but it wasn’t that much more (than usual),” Arentz said.

With compounding crises occurring across the country and in Maryland’s neighboring Washington, D.C., Mautz said he feels “a heightened level of anxiety among everyone.”

He said he doesn’t expect the chaos from the Capitol to percolate into Annapolis, but he predicts there will be increased interest in state-level lawmaking this session.

The Eastern Shore Delegation has its first delegation meeting on Friday, Jan. 15 at 9 a.m. Arentz, who will be leading the meetings via Zoom video call, said it’s “gonna be fun.”

Arentz said he’s ready for session to be underway and urged people to keep an eye on policing reform, budget, energy, and coronavirus aid and relief bills that will be up for debate.