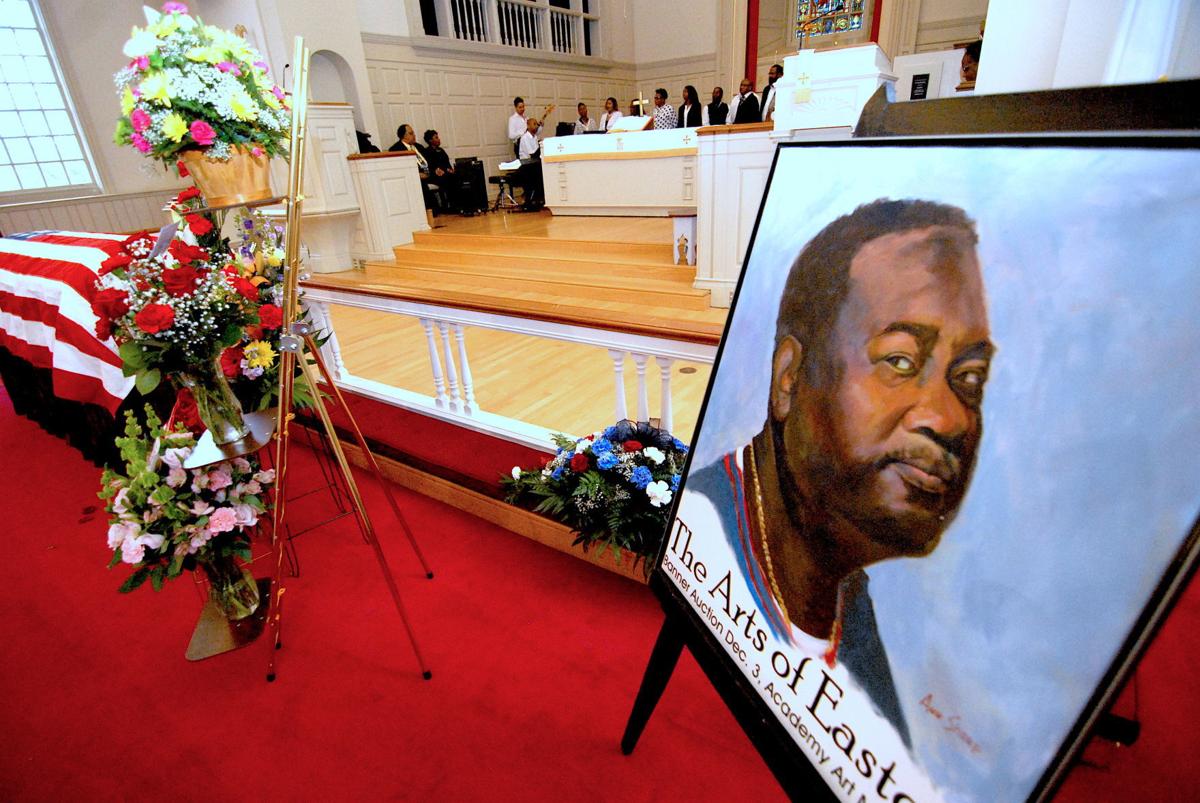 An Easton banner portrait of Lord Sheldon “Scotty” Scott by local artist Ann Sharp, right, is a centerpiece near the altar at St. Mark’s United Methodist Church during a memorial service to remember Scott on Saturday. 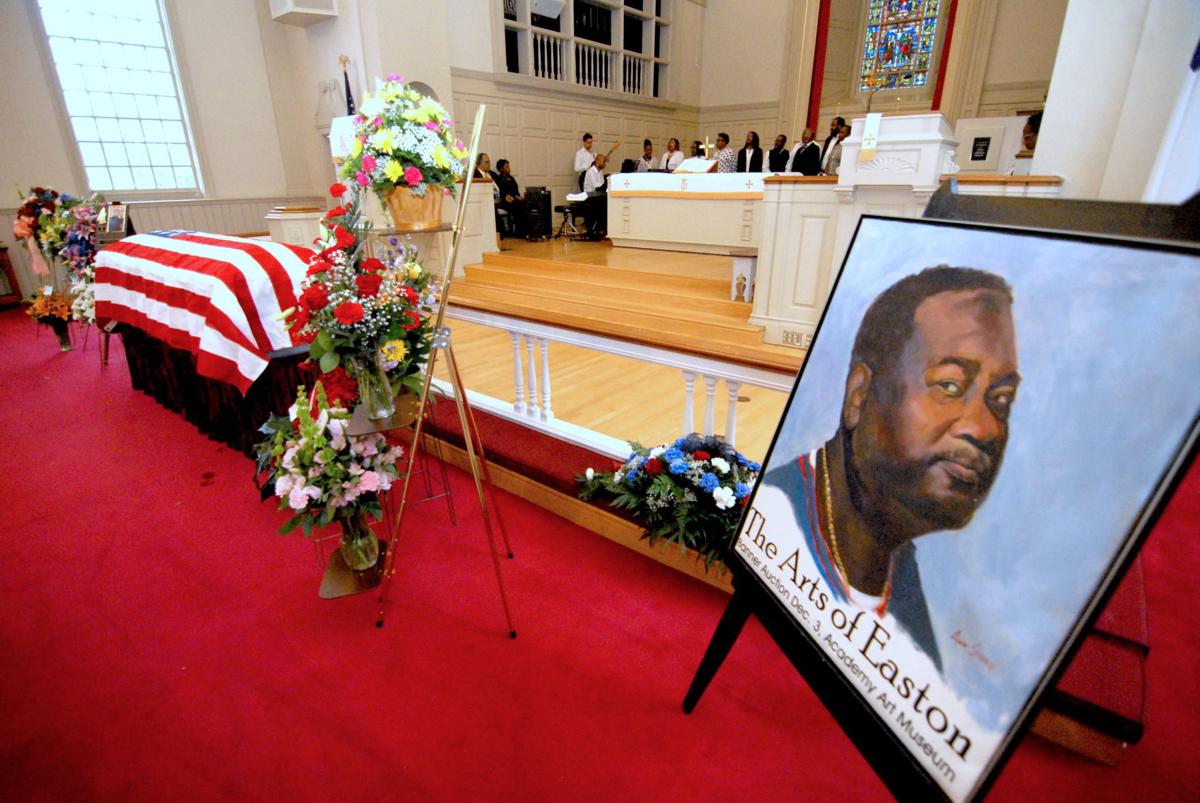 An Easton banner portrait of Lord Sheldon “Scotty” Scott by local artist Ann Sharp, right, is a centerpiece near the altar at St. Mark’s United Methodist Church during a memorial service to remember Scotty on Saturday. 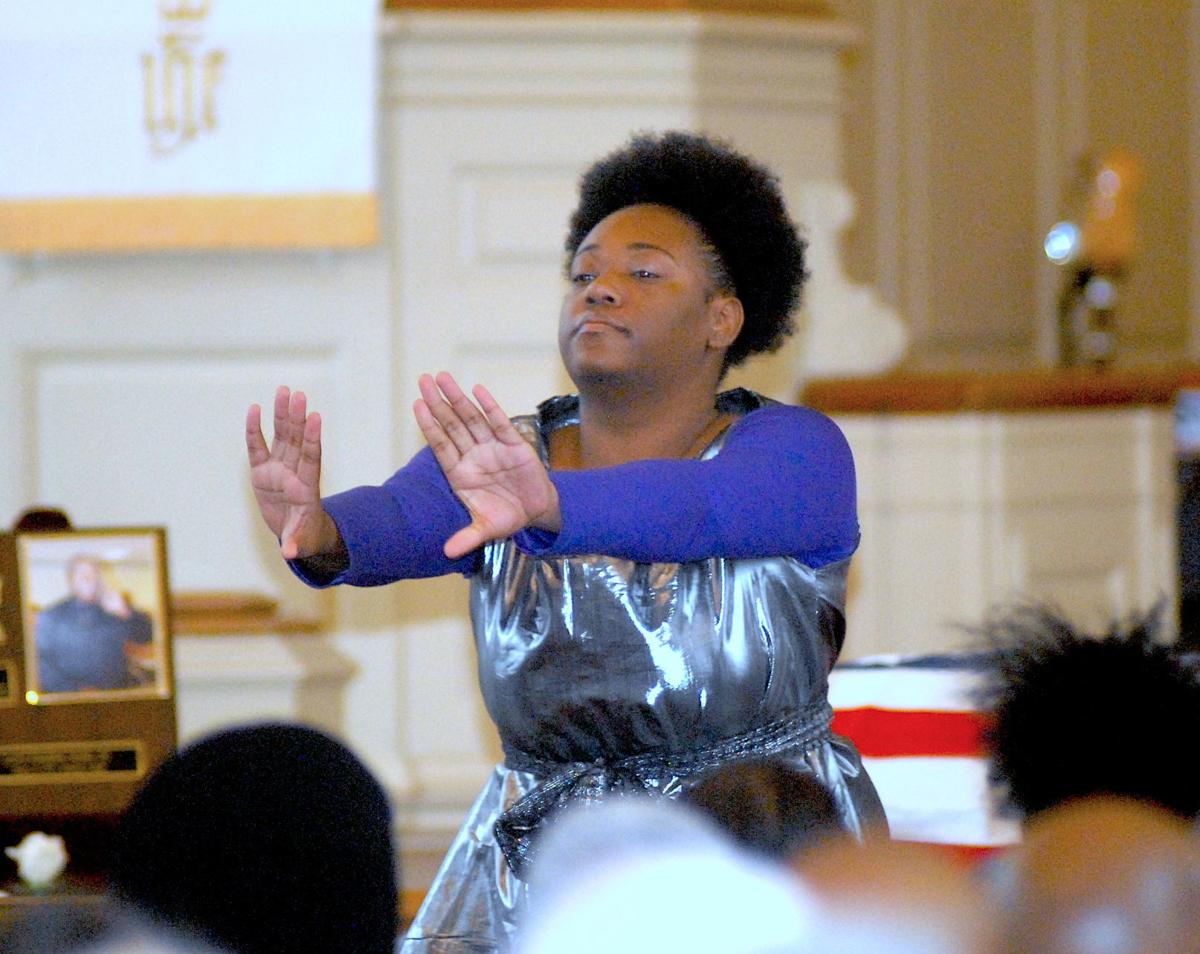 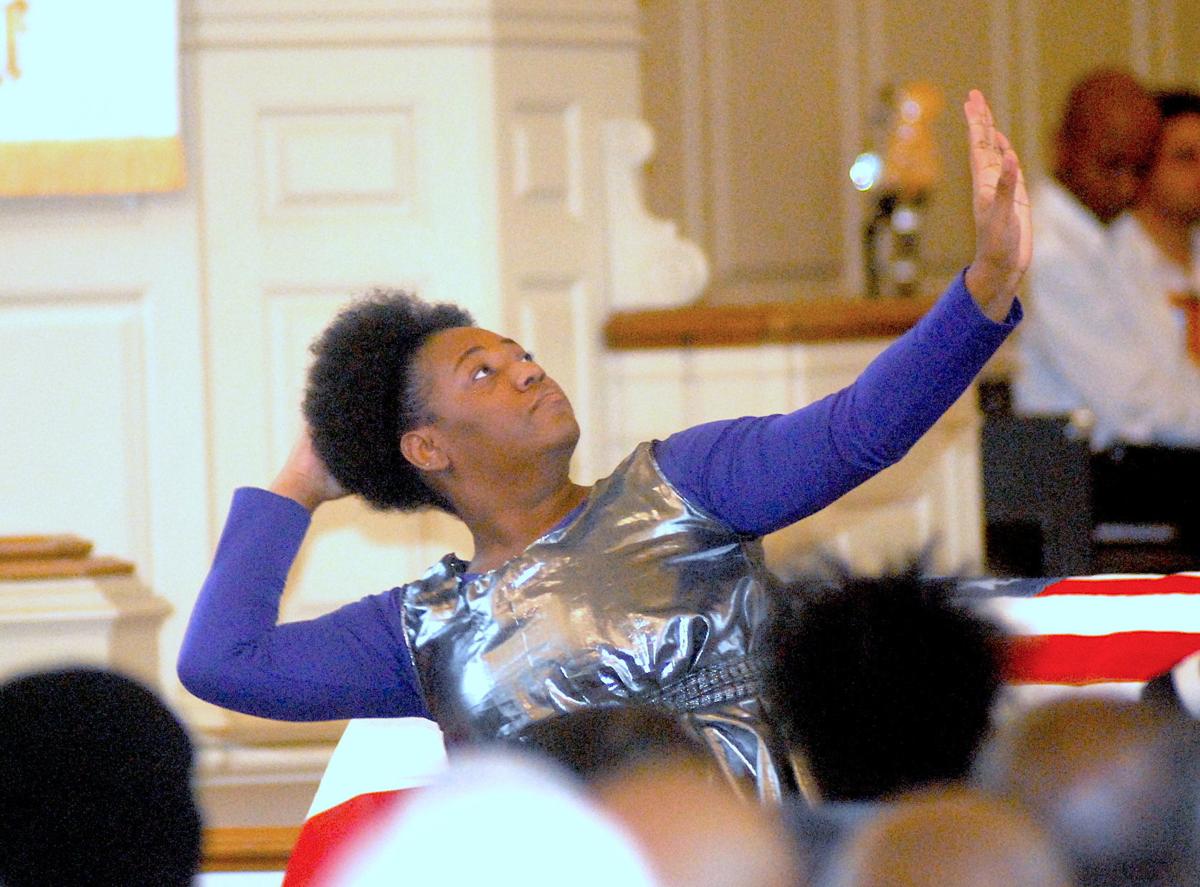 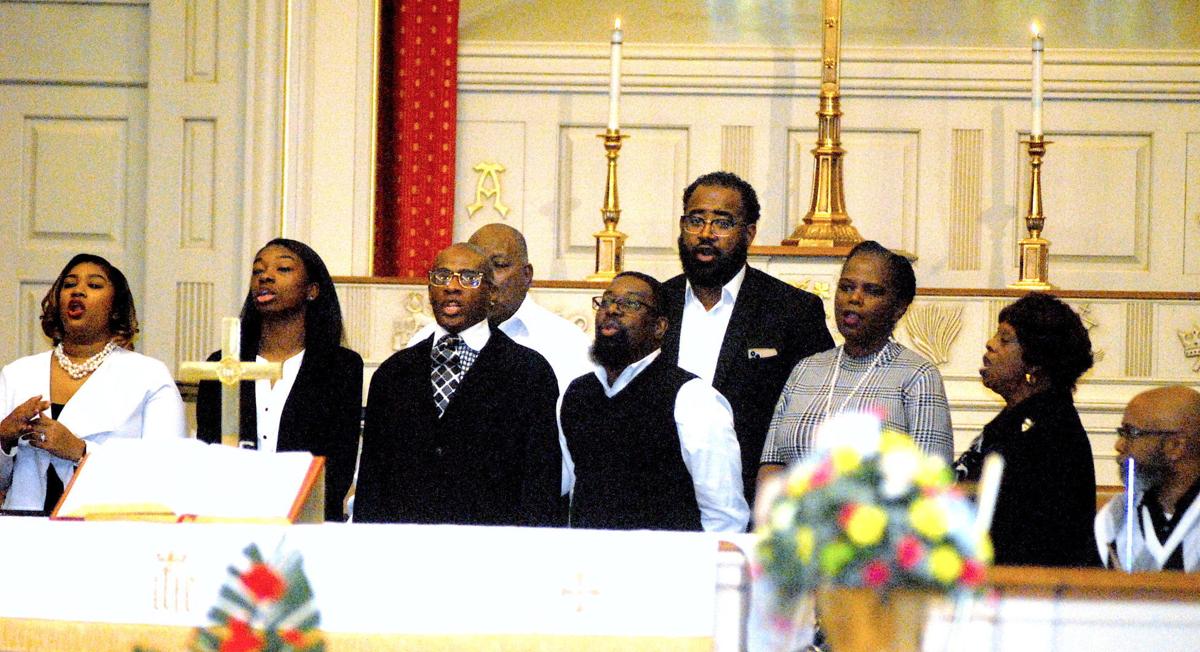 The Friends for Christ singers raise their voices during the service for Lord Sheldon “Scotty” Scott at St. Mark’s United Methodist Church on Saturday. 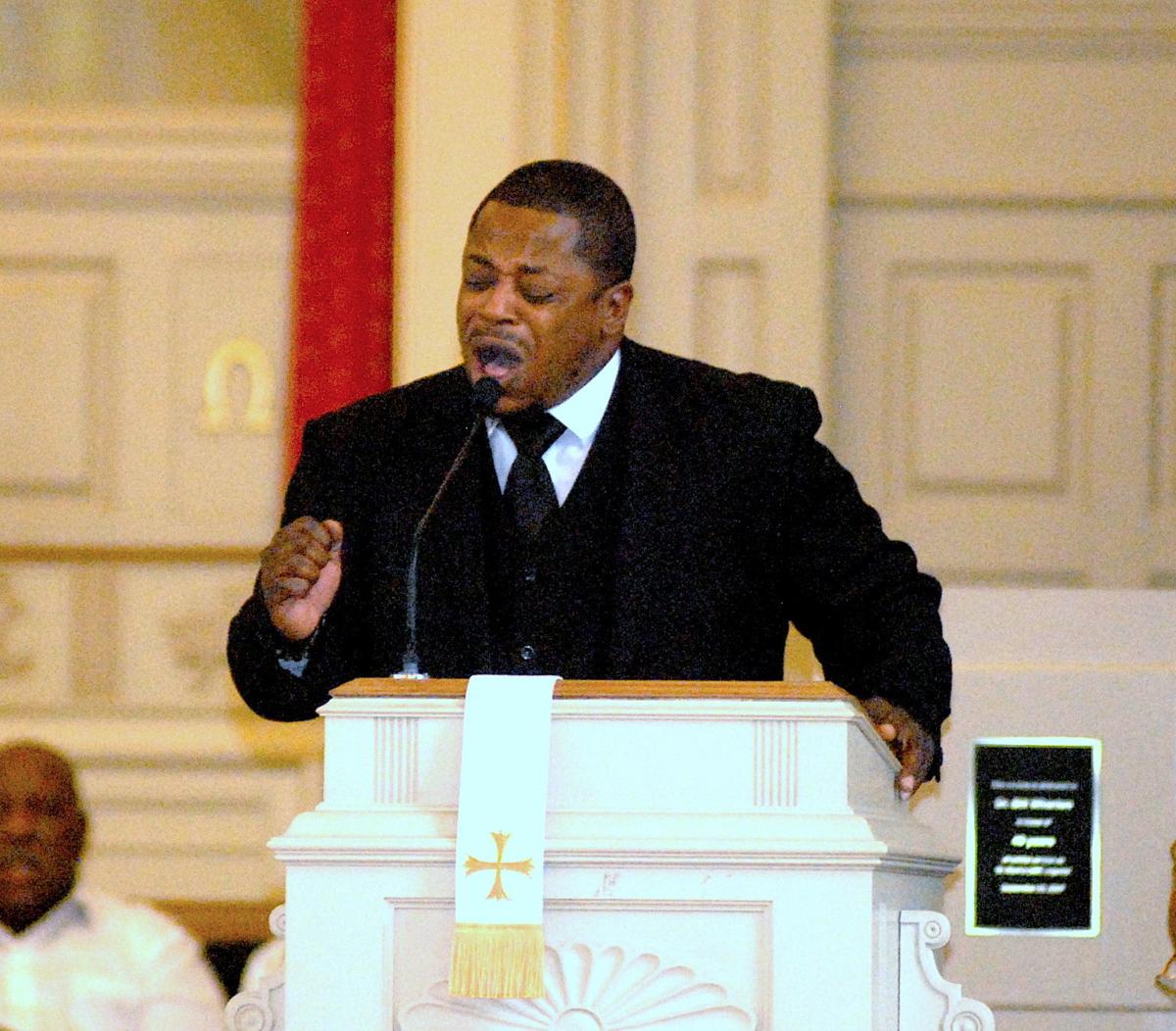 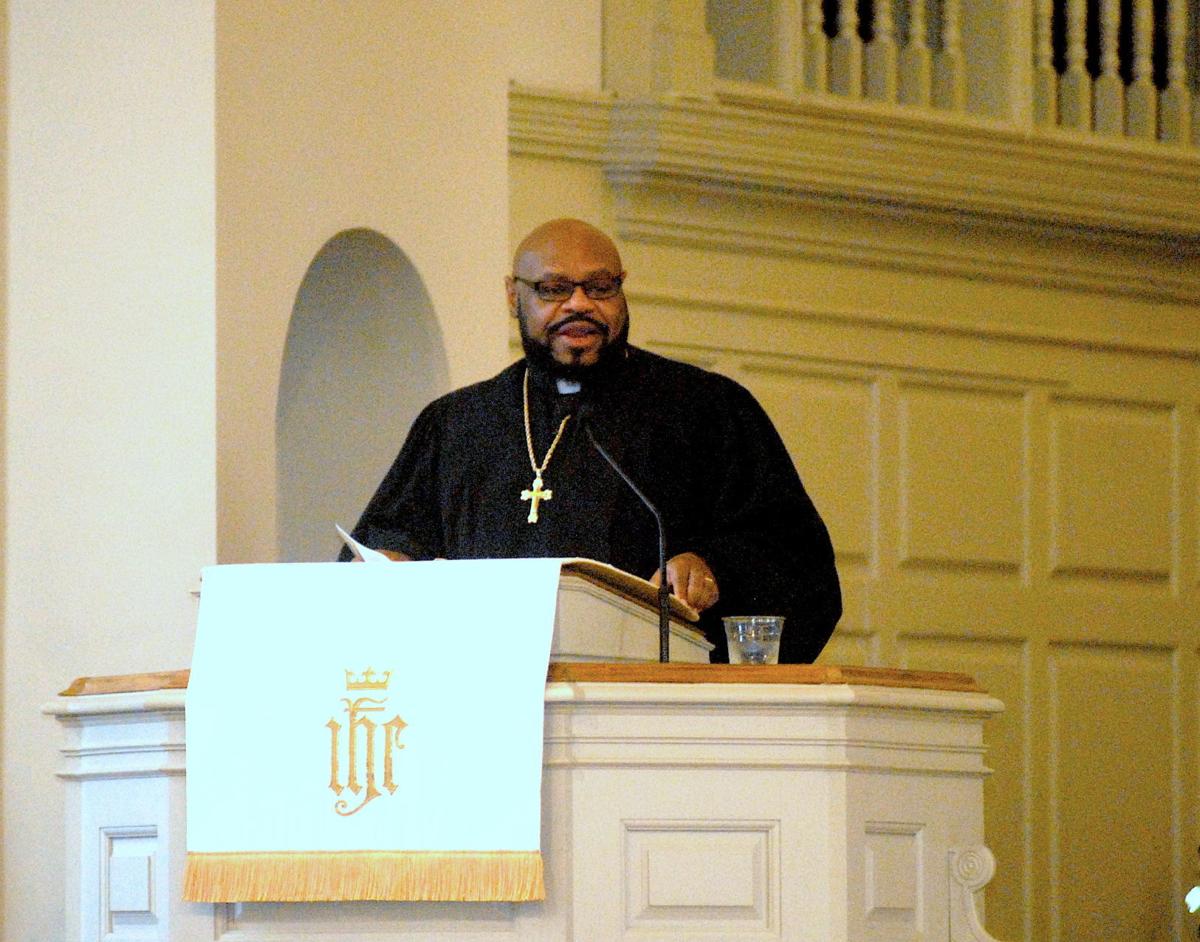 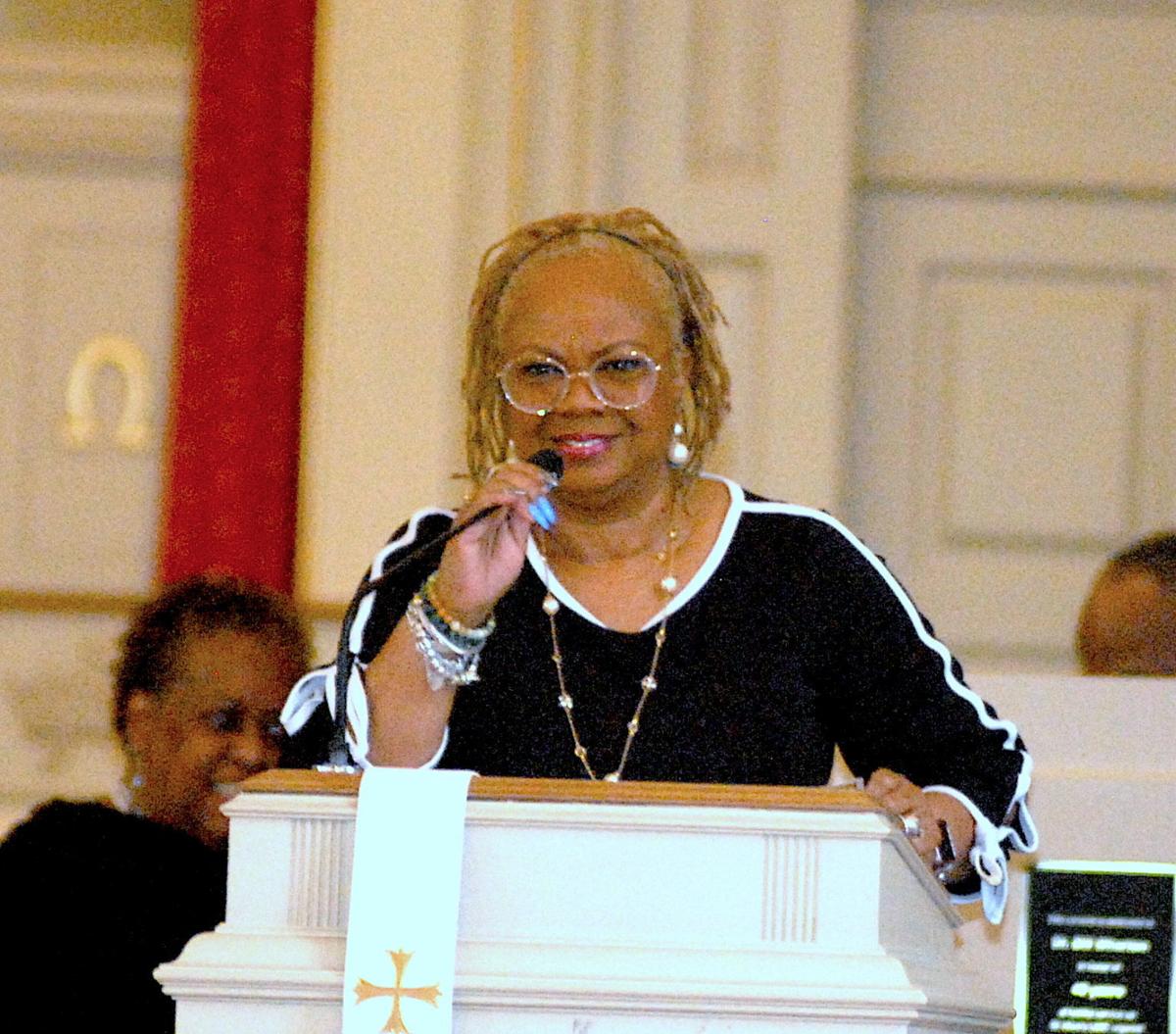 The Rev. Deborah Short of the Tri-Life Christian Center speaks at the funeral services for Lord Sheldon “Scotty” Scott. 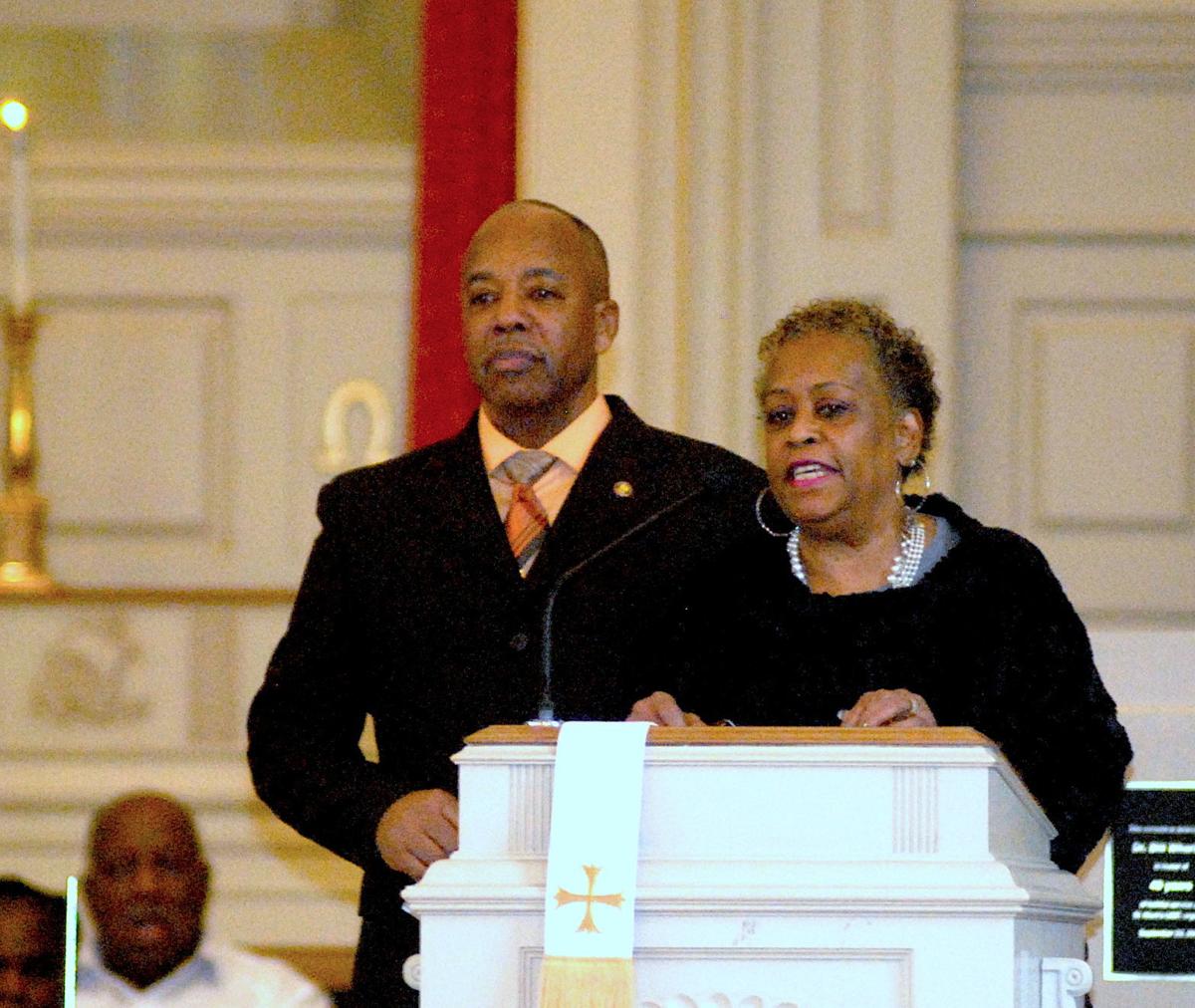 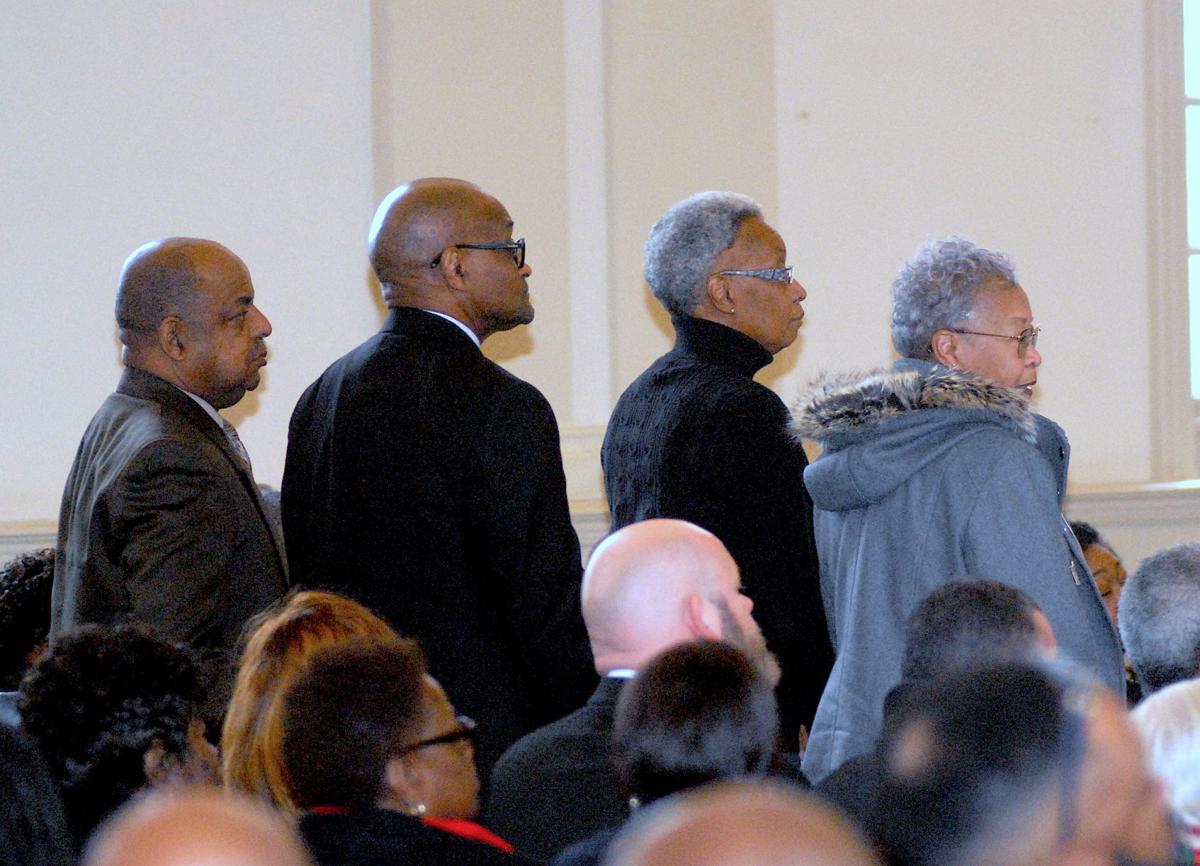 Members of the class of 1969, Easton High School, stand up to be recognized at the funeral for their classmate, Lord Sheldon “Scotty” Scott. 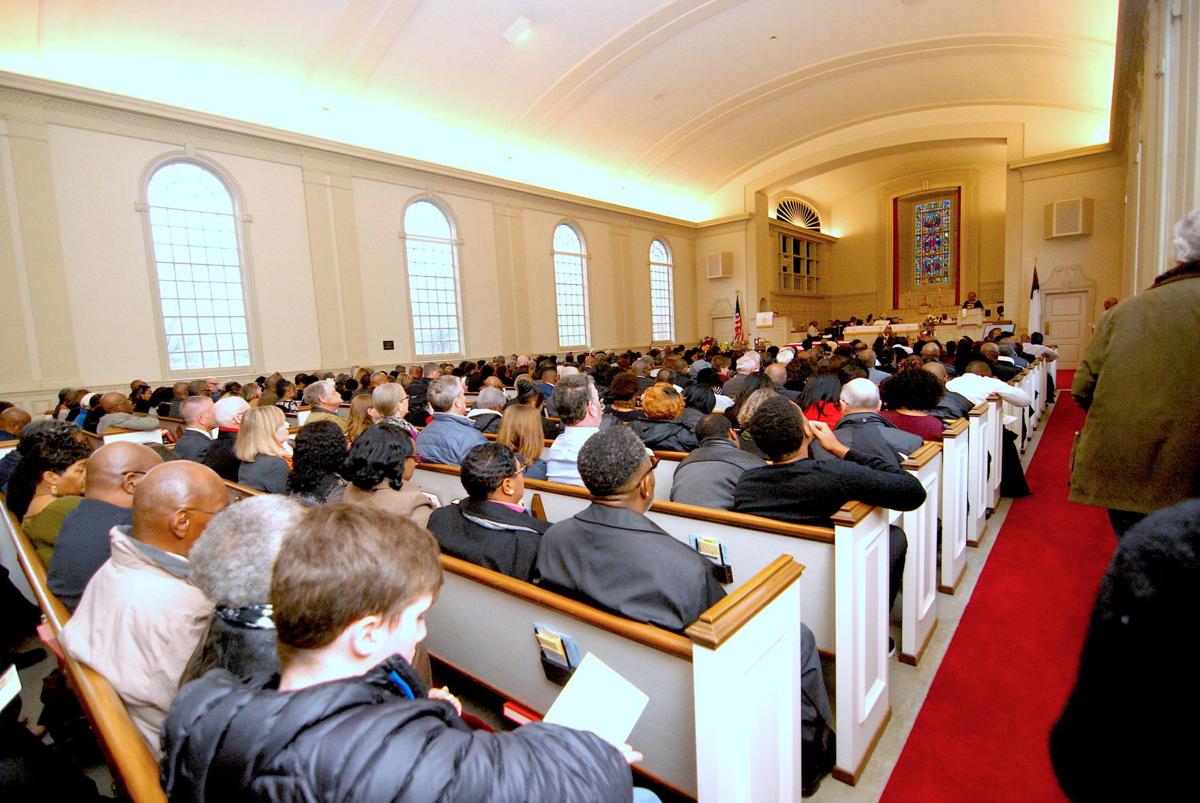 A crowd of at least 500 people meant every seat at St. Mark’s United Methodist Church was taken for the funeral service of Lord Sheldon “Scotty” Scott. 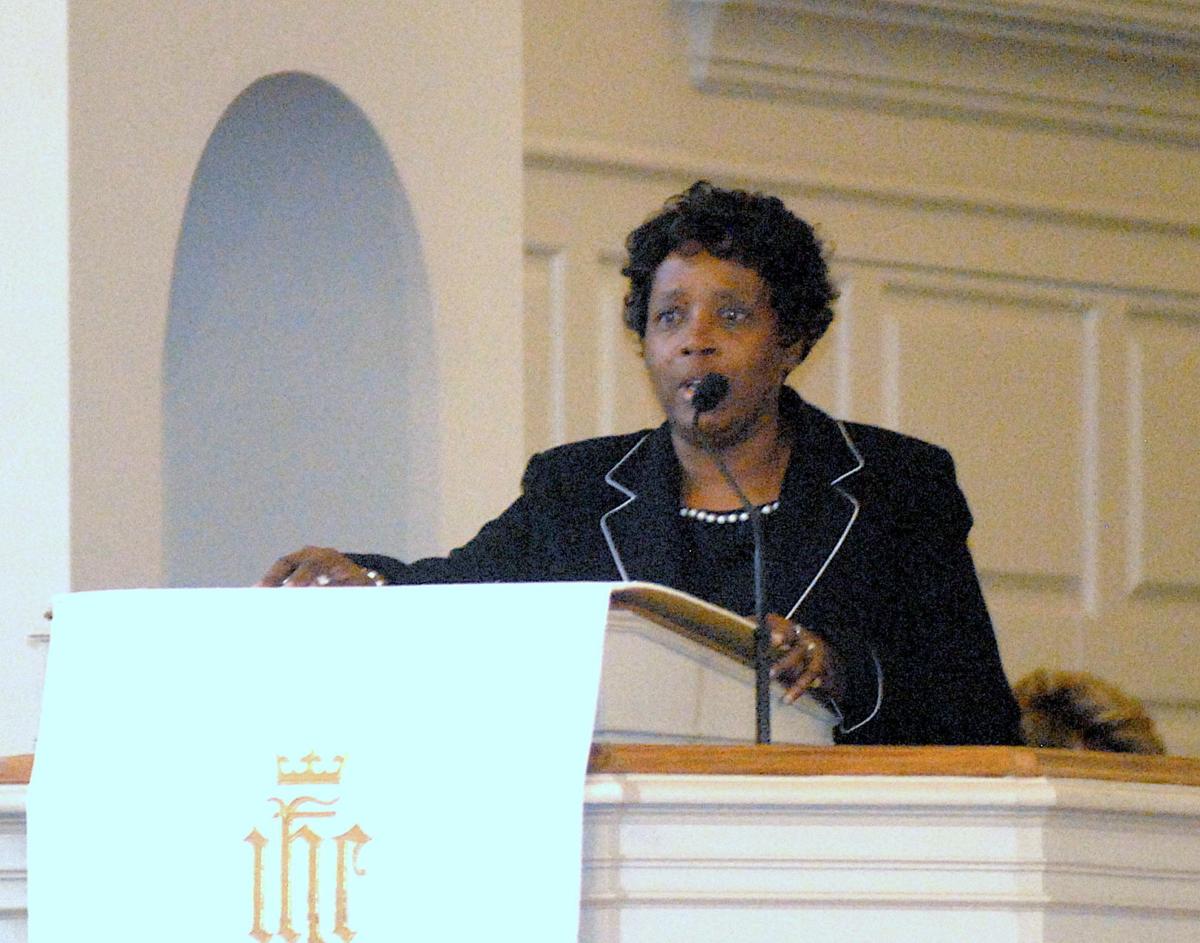 An Easton banner portrait of Lord Sheldon “Scotty” Scott by local artist Ann Sharp, right, is a centerpiece near the altar at St. Mark’s United Methodist Church during a memorial service to remember Scott on Saturday.

An Easton banner portrait of Lord Sheldon “Scotty” Scott by local artist Ann Sharp, right, is a centerpiece near the altar at St. Mark’s United Methodist Church during a memorial service to remember Scotty on Saturday.

The Friends for Christ singers raise their voices during the service for Lord Sheldon “Scotty” Scott at St. Mark’s United Methodist Church on Saturday.

The Rev. Deborah Short of the Tri-Life Christian Center speaks at the funeral services for Lord Sheldon “Scotty” Scott.

Members of the class of 1969, Easton High School, stand up to be recognized at the funeral for their classmate, Lord Sheldon “Scotty” Scott.

A crowd of at least 500 people meant every seat at St. Mark’s United Methodist Church was taken for the funeral service of Lord Sheldon “Scotty” Scott.

EASTON — It was one of the largest funeral services ever held in Easton, with more than 500 in attendance.

Lord Sheldon Scott, affectionately known as “Scotty” most of his life, was given a historic send-off Saturday afternoon, Jan. 18, by a community that loved him for so many things and in so many ways.

He died after a sudden and brief illness at the hospital in Easton, surrounded by family on Jan. 3. He was 69.

Scott was born on Aug. 6, 1950, in Easton to Mary Norma Louise Scott and the late James Russell Sr. He was raised in Trappe and graduated from Easton High School in 1969.

He moved to Connecticut and joined the military in 1970. He was medically discharged.

Every seat in the vestibule and balcony at St. Mark’s United Methodist Church was taken, and the balcony was full. About 60 more stood through the service.

Officially, Scott had owned a BP gas station, sold used cars for Leroy Miller, and had been a furniture store owner, taxi cab service owner and driver, veteran, father, grandfather and great-grandfather. He was the driving force behind “Operation Christmas Spirit” that ultimately fed and provided gifts for 1,000 people on every Christmas Day beginning in the ‘70s.

Unofficially, Scott was the go-to guy when a person needed help. He was the guy you went to when you were in trouble. His taxi cab service was available every day, every hour of the day or night, making him a witness to lots of things other people never see.

He was a listener who did not talk so much about himself. He knew everybody everywhere.

“He knew their kids and their grandkids,” Tripper Showell said. “He was an amazing man.”

“Sheldon was an astute businessman,” said John Hurt, who rented Scott his building for more than 20 years while Scott ran his used furniture business there.

“He had a variety of businesses, and he did them all very well,” Hurt said. “He knew a lot of people. I think that was the key to his success. He knew how to connect with people.”

Hurt said Scott employed a crew of young men who helped at times.

“He made money by buying things and reselling them, but he also took care of people in need from that business he had,” Hurt said. “It was pretty ingenious.”

“If Sheldon were to buy out an estate, you know, here in Talbot County, if there were things in there that somebody needed, I wouldn’t be surprised if he just gave it to them,” Hurt said. “Somebody needy.”

He also knew how to connect people with other people if he couldn’t provide the particular service needed.

“I know of no one who had a bigger heart than Sheldon,” Hurt said. “I have a tendency, whether it’s good or bad, to categorize people as a taker or a giver. And Sheldon was the ultimate giver.”

Decades ago, before Habitat for Humanity had its ReStore, before the Rotarians collected coats for the needy, Scott took it upon himself to do that work.

“He just gave of himself,” Hurt said. “Establishing this Operation Christmas Spirit was a good example. Sheldon, years ago, he would gather coats. At Christmas, someone would donate a coat. Scotty would gather them up and give them to needy people at Christmas. Most people probably didn’t know about that.”

“He accepted people for who they are and nothing more,” Hurt said. “And I think that’s a great attribute that we all could have.”

Scott’s signature project, Operation Christmas Spirit, started in the early 1970s when a group of hunters had brought back a lot of game and wanted to share it with the community.

Showell said Scott and some others made arrangements with a local restaurant to cook the game, and a few volunteers delivered it, along with presents, on Christmas Day.

In recent years, it became necessary to take over the Easton firehall for a couple days, orchestrating a huge holiday meal with foods that were traditional, but also spreading across several cultures. Volunteers would make more than 100 deliveries in five counties. The effort included gathering new toys, wrapping them, providing mostly new warm clothing and giving out bags of groceries to more than 1,000 people.

During the last few years, Scott commented to The Star Democrat that he might stop doing it, because it had become too much for him.

“He said that to us, too,” Tripper Showell said. “But he always did do it.”

“And think about this,” Hurt said. “Who in the world could put that thing together? Who would know who to tap and who to go to for cash donations or product donations? There are very few people who would have that kind of ability who would generate the enthusiasm.”

One “Christmas Miracle” that always seemed to occur, that always made people marvel, was that Scott never called volunteers or organized them.

“A hundred volunteers, without prior contact, they would just start showing up when they were needed,” Showell said. “It was amazing.”

Word apparently just got around. Perhaps it was the result of Scott’s extensive ministry of helping individual after individual coming back to him in that extraordinary spirit humans feel on Christmas Day.

On Christmas Day 2019, Scott’s miracle happened again. As volunteers were cleaning up and leaving, there were many hugs and expressions of thanks.

He sat down and stretched his legs, mopped a little sweat off his brow and said goodbyes to them. He seemed happy but tired.

No one could have known that four days later, he would collapse in his store and need to be taken to the hospital.

More than 500 people sat or stood in silence to pay homage to Scott on Saturday in St. Mark’s United Methodist Church.

Scott was honored for his service with a presentation by American Legion Blake-Blackston Post #77.

Several members of Easton High School class of 1969 presented their school memories of him.

The voices of the Friends for Christ singers with instrumental accompaniment soothed those who grieved. A solo by Mondrea Hasty also brought many to their feet with emotion.

“Thank you, God, for brother Scott,” Hines said. “Thank you for the many lives he touched. We know full well, dear God, that it was only you that caused him to do such great work. All of us were touched by him, so that we may carry a little bit of him and what he did for us.”

Scott is survived by his daughter, Shalonda Batson of Texas, and his son, Lord Scott Jr. of Georgia; his grandchildren, Jaimont Murray, Jonas Rosser Jr.; Shacarra Batson and Carl Batson Jr.; and his great-grandchildren, Akiya and Jeremith Murray and Jace Rosser, all of Texas.

He also is survived by his mother, Mary Norma Louise Scott of Easton; eight sisters and four brothers, including Elizabeth Thomas and her husband Chester, Karen Martin and her husband Lump, Loretta Collins, Sylvia Smith, Ernest Russell and his wife Joan, and James Russell, all of Easton, Joyce Ross, Sharon Kellum of Cambridge, Chip Lewis and his wife Felicia of Wilmington, Del., Ricky Lewis and his wife Lisa of Smyrna, Del., Ernestine Russell of New Jersey and Christine Dotson of Preston. He also leaves behind a host of nieces, nephews, cousins and friends. He is survived by Tyrone Stewart, who was like a son to him; and a special friend, Trina Gardner.

Scotty will be interred in the Eastern Shore Veterans Cemetery in Hurlock Maryland with the graveside service at 10 a.m. Tuesday, Jan. 21.