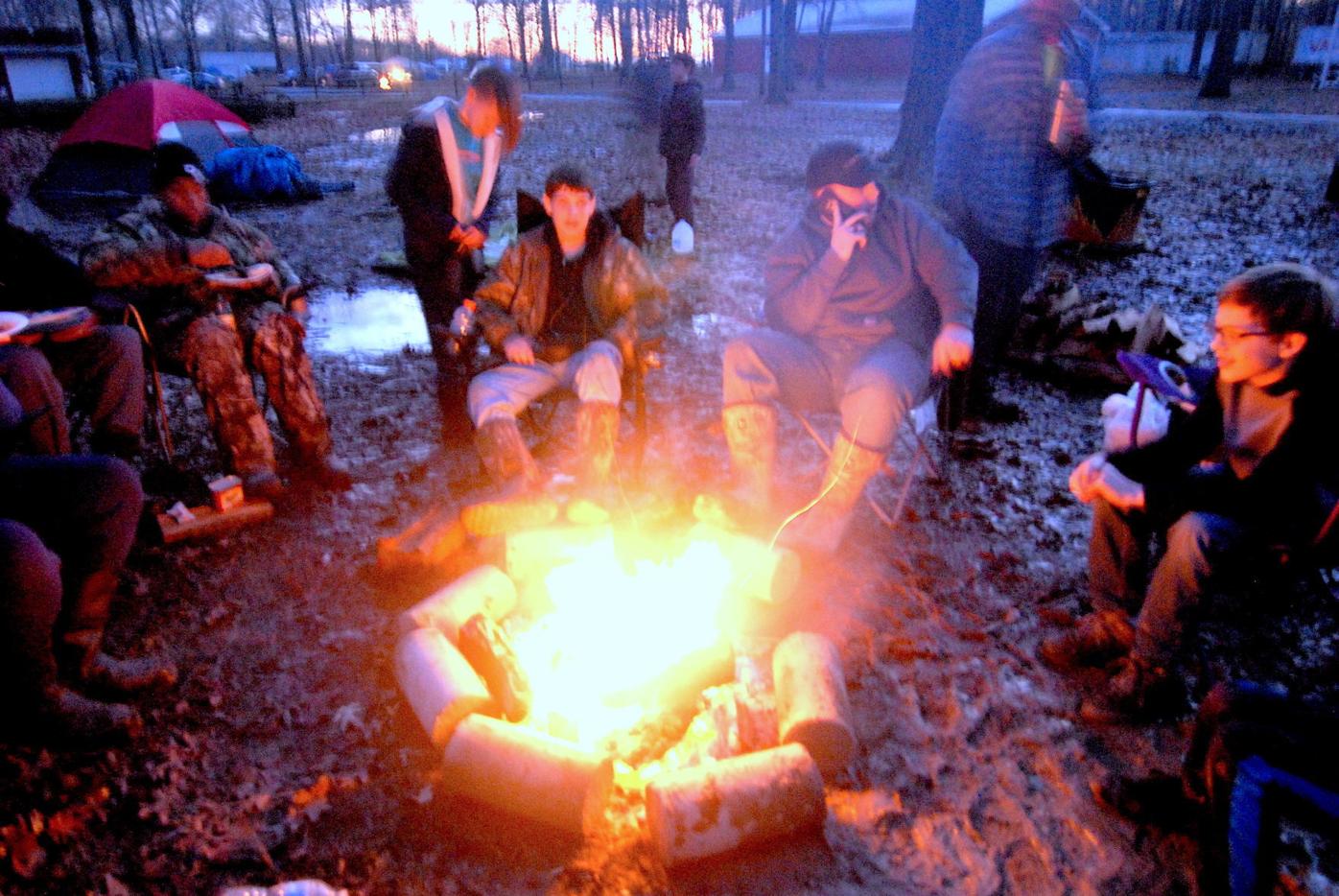 Scouts from Troop 165 Denton relax after cooking dinner over an open campfire at the Tuckahoe Steam and Gas Showgrounds on Saturday, Jan. 25. More than eight Mid-Shore troops did some cold weather camping and skills challenges at the Klondike Derby.

Scouts from Troop 165 Denton relax after cooking dinner over an open campfire at the Tuckahoe Steam and Gas Showgrounds on Saturday, Jan. 25. More than eight Mid-Shore troops did some cold weather camping and skills challenges at the Klondike Derby.

EASTON — It’s called the Klondike Derby because 120 years ago, there was a Klondike Gold Rush. Hundreds of hardy souls lugged enough food for a year over some steep, snow-covered mountain passes to get to a creek in Alaska’s Yukon Territory where they were hoping to get rich.

It must have been the survival of the fittest as men raced across the frozen Canadian wilderness by means of dogs and sleds.

Fast forward to last Saturday, Jan. 25, and eight Mid-Shore troops of Boy Scouts, camping out at the Tuckahoe Steam and Gas Show grounds, honored the Klondike experience with some winter camping, a sled race and tests of camping skills.

Scout leader Ernie Smith said the best part of the Klondike Derby was the coming together of eight different Mid-Shore troops. There also was a troop from College Park that shared the campground after going to a swim event at the Easton Family YMCA.

Friday evening, Jan. 24, they camped in a rainstorm, and Saturday the sled race was delayed for a couple hours, but how to deal with changing weather is part of a Scout’s survival skills.

For the sled race, there were 12 patrols, each with their own homemade sled.

Patrol members build their own sleds, and there are all sorts of designs and decorations. Sleds have to be versatile enough to withstand frozen or snowy ground or, in the case of that Saturday’s weather, lots of mud.

The Klondike Derby also includes a series of games and challenges that draw upon the camping lessons that Scouts are trained in.

“You can test Scouts on their knowledge and their skills without saying, ‘OK, we’re going to test you on your skills,’” Palmer said. “They can compete. It’s a game. They can show how well they apply those skills.”

Fire-building, knot-tying, first aid, compass-reading, and knife and hatchet throwing were tested. There was a “track a lost Cub Scout” challenge.

The Scouts had to pitch a tent blindfolded.

When it came to the knot-tying competition, things got a little scary. Smith said they turned it into a “knot tying undead Scout leader apocalypse.”

“You had to tie the knots or ancient zombie Scout leaders coming up in their Smokey the Bear hats and calf-length summer socks would have you cornered, and the only way you could keep them away was to tie five knots correctly,” Smith said, laughing.

An unusual treat for the Scouts was a ham radio trailer set up by the Easton Amateur Radio Society under the guidance of radio buff and Scout leader Jack Fisher.

Scouts listened to a brief explanation, then got to go inside the trailer and operate a ham radio.

At the end of Saturday, each troop built its campfire and cooked dinner. Then there was a large community campfire later on with skits and entertainment.

The group swelled to about 75 Scouts, and with parents and leaders, more than 100 people were camping out at the steam show grounds.

Palmer said camping in the dead of winter never phased a Scout. In February, he said, Scout Troop 165 Denton will camp in Gettysburg, Pa., hike the battlefield, trace the steps of Pickett’s Charge and climb up Cemetery Ridge.

This year’s Klondike Derby was hosted by Boy Scout Troop 532, which is headquartered at Easton Elks Lodge 1622.