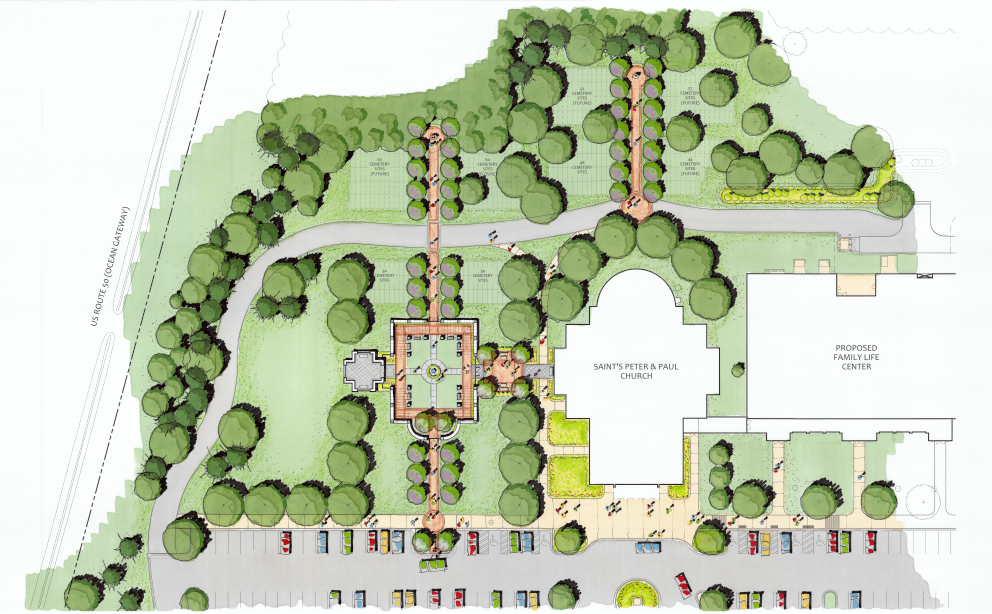 This illustrative site plan shows the Saints Peter & Paul Parish memorial columbarium and cemetery on the left (east) side of the church. 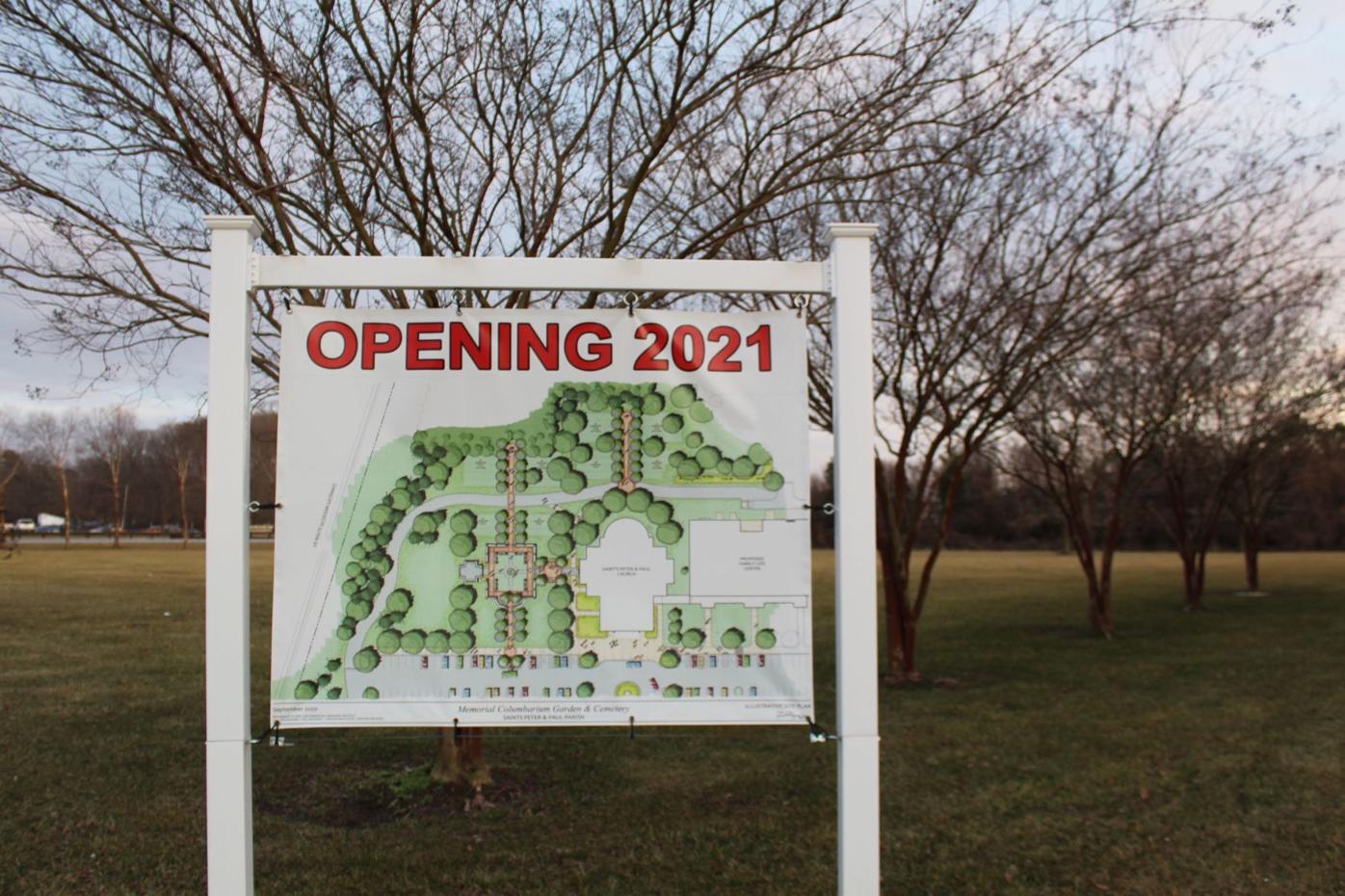 This sign at Saints Peter & Paul Catholic Church shows the layout of a new columbarium and cemetery open to all faiths that will be constructed in the coming months on the east side of the church. 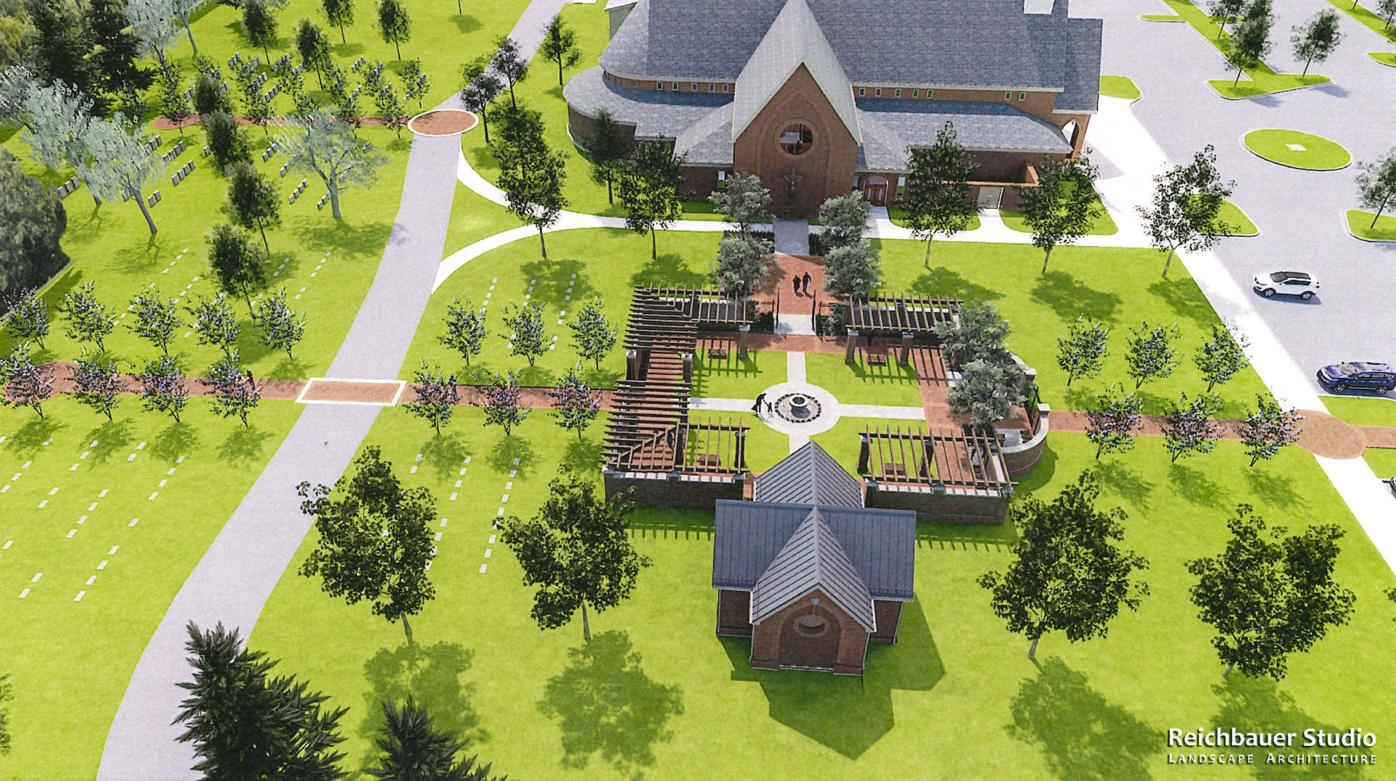 Landscape architect Craig Reichbauer of Reichbauer Studio, PLC in Richmond, Virginia, developed the original concept plan and designed the columbarium and layout of the graveyard. 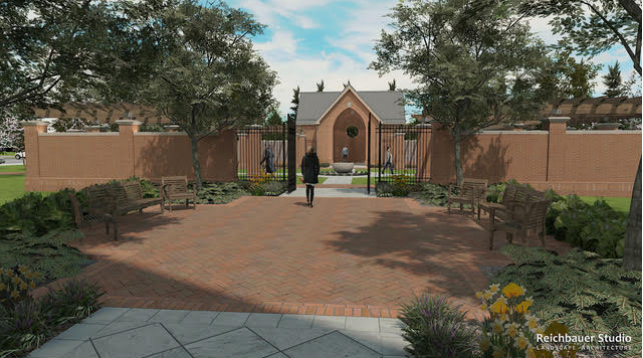 This architect illustration shows the view from the front entrance gate with the Memorial Garden and Pavilion beyond. 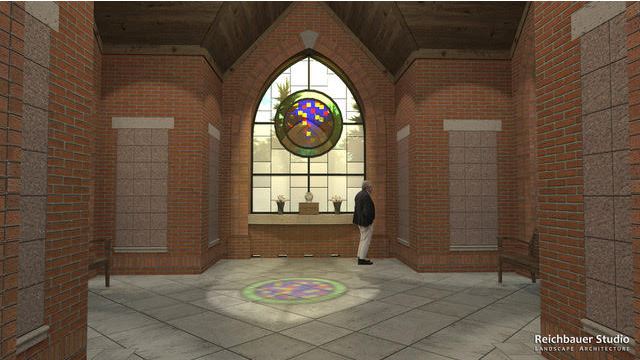 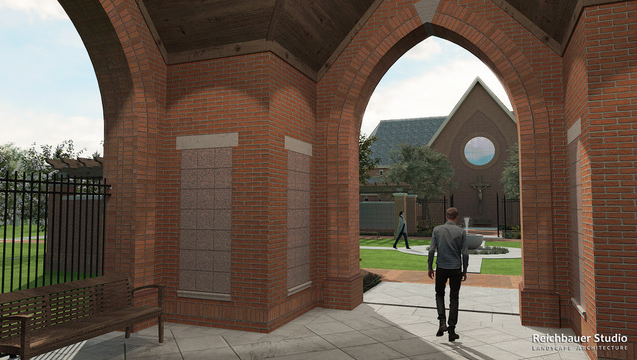 This view from inside the columbarium pavilion shows the memorial garden with fountain and Saints Peter & Paul Church. 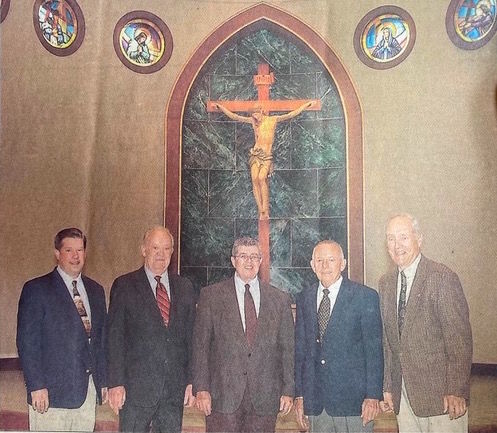 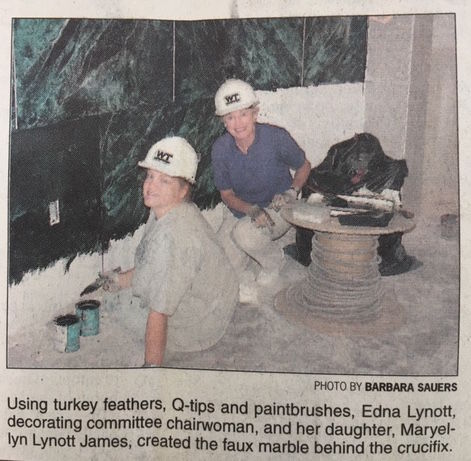 This undated Star Democrat photo shows Edna Lynott, right, and her daughter Maryellyn Lynott painting the false marble behind the crucifix in the sanctuary of Saints Peter & Paul Catholic Church.

This illustrative site plan shows the Saints Peter & Paul Parish memorial columbarium and cemetery on the left (east) side of the church.

This sign at Saints Peter & Paul Catholic Church shows the layout of a new columbarium and cemetery open to all faiths that will be constructed in the coming months on the east side of the church.

Landscape architect Craig Reichbauer of Reichbauer Studio, PLC in Richmond, Virginia, developed the original concept plan and designed the columbarium and layout of the graveyard.

This architect illustration shows the view from the front entrance gate with the Memorial Garden and Pavilion beyond.

This view from inside the columbarium pavilion shows the memorial garden with fountain and Saints Peter & Paul Church.

This undated Star Democrat photo shows Edna Lynott, right, and her daughter Maryellyn Lynott painting the false marble behind the crucifix in the sanctuary of Saints Peter & Paul Catholic Church.

EASTON — What began as the dying wishes of two loyal parishioners of Saints Peter & Paul Catholic Church in Easton is becoming a reality. And their children from across the Chesapeake Bay are hard at work fulfilling their parents’ dreams.

Along with two ambitious projects — a new Family Life Center and a new high school building on the parish’s main campus at 1210 South Washington Street in Easton — the parish is building a $1.6 million columbarium and cemetery on the east side of the church facing U.S. Route 50.

Burial plots in the cemetery and urn niches in the columbarium will be available for purchase by anyone, not just Catholics.

Although a cemetery on the grounds had part of the original vision of church planners, “we agreed to do the columbarium with our dads,” said Annapolis attorney Michael Milone, whose father Dr. Frank Milone chaired the original building committee. Milone’s commitment was mirrored by Pat Bonan of Potomac, Maryland, whose family also were benefactors of the new church.

“Michael’s dad passed away, and then Pat’s father passed away,” said the Rev. James Nash, senior pastor. “And one of the things that they both wanted was to be buried on this property, and so (I said), ‘Let’s talk about it.’ Well, when you say that to these two, there’s no talking about it — it’s going to happen. They seriously are the driving force behind this.”

“My parents were very passionate about the church; they found Saints Peter & Paul Church a very welcoming community, a source of a lot of their friendships,” Bonan said. “And for years, they’d been talking about a beautiful columbarium befitting of the church.”

Construction will begin in March, weather permitting, with the project scheduled to be completed in early fall 2021.

The columbarium has two sections, as well. The Pavilion is a roofed structure featuring an altar-like ledge that will anchor a stained-glass wall. It will initially offer 84 niches and ultimately 168. The Pavilion is entered from the Memorial Garden and can be used for committal services. The Memorial Garden is a walled and gated open-air garden with a central water feature, a pergola for shade and benches. It will initially offer 250 niches and ultimately 850.

All niches are companion niches that can accommodate at least two urns.

The Welcoming Patio, located between the main entrance to the columbarium and the side of the church, features a large crucifix that will be placed directly under the church’s existing large round existing stained-glass window. It will also feature benches, chairs and coffee tables and is suitable for small gatherings. There will be a walkway from the Welcoming Patio to both sections of the cemetery as well as to the columbarium.

The need for a columbarium

According to the parish’s website, “the Vatican lifted the prohibition forbidding Catholics to choose cremation in the 1960s. In lifting the ban, the Vatican promoted the philosophy that the remains of the cremated bodies are to be treated with the same respect given to the corporeal remains of a human body.

“In all cases, the Church requires that the human remains be treated with due reverence.”

“The Diocese (of Wilmington) was pretty clear with me that you can’t just build a columbarium, because the preferred for the church is, of course, full body burial,” Nash said. “But cremation is obviously acceptable, and it’s becoming more and more popular, so they didn’t want to make it look like we were giving preference to cremation. And we found out that there are many people who wanted in-ground burial. But I think as time goes on, you’re going see people wanting cremation.”

Two of those people were Edna and Joe Lynott, Bonan’s parents. When her father became ill, Bonan said her parents were “very concerned about his final resting place.”

Joe Lynott was active in helping Frank Milone raise funds for the construction of the church. Edna Lynott, an artist, chaired the interior decorating committee of the new church. She and her daughter, Maryellyn Lynott, painted the two-story faux marble backdrop behind the crucifix in the sanctuary.

The Lynotts had sold their plots and then their urn niches in Silver Spring. “So when my father was ill, I said I will do what I can to help get (the columbarium) over the finish line. And there was a parallel track going on with Michael Milone, who I didn’t know at the time.”

Another connection Bonan calls a “serendipitous coincidence” was getting to know the work of landscape architect Craig Reichbauer in Richmond, Virginia, two years ago.

Reichbauer designed a similar columbarium at the Richmond parish of Lynott’s maid of honor who attended her some 60 years ago. Bonan’s trip to see Reichbauer’s work convinced her that he could develop a plan for Saints Peter & Paul Parish.

“As we were trying to get the approvals and trying to push this forward, it certainly helped that we had a landscape architect who had done something similar and saw exactly what we were trying to do, and in relatively short order he came up with a beautiful plan. But I don’t think any of us thought it would be as beautiful as it’s turning out to be,” Bonan said.

“One of the things I know was important to Father (Nash) and Michael and everybody else was there was a desire to not just make this place a place befitting the beautiful church that we have, but it was to be a sacred place of contemplation, meditation and healing,” Bonan said.

The Milone family moved to Easton in 1998, but on vacation trips since the 1950s, many times they had driven by the farm on which the church now sits, Milone said.

“For years my dad seemed to always end up in a parish where they needed a church built,” Milone said. “So he built a church in 1970, and then he built another one in like, 1985.” When the Milones moved to Easton, the bishop enlisted him to help plan and build a new church. And Frank Milone soon knew he wanted to be buried on the property of his new church home.

In 2017, Frank Milone was diagnosed with leukemia. During one of his hospital stays in Easton, Michael Milone visited his father in May and asked him about his final wishes. First, take care of your mother, Frank Milone said. His second request: “It would be really great if you could build the columbarium.” He died in August 2018.

Like Bonan’s commitment to her father, who also died in 2018, Michael Milone’s was based on a similar deep respect and love. They have poured themselves into the work for others who have lost their loved ones as well.

“This design is a place to honor those who have passed and keep the promises we made,” Milone said. “But I’m also realizing for myself, and for Pat, and for our parents who are still alive, it’s a place to heal.”

It’s all about teamwork

“We’ve been joined by just tremendous support, and terrific people on the team. Two professional sales people who’ve retired are heading up the sales effort, and a retired CPA is handling all the numbers. And Michael and I are talking every day,” Bonan said. “Things just kept falling into place, so it seemed destined to happen.”

“For me, whenever we needed something, we have always just kind of gotten it out of nowhere,” Milone said. “So really, the support of the parish and obviously Father Nash has been absolutely critical.”

Other members of the committee are Fran and John Wolfe, and Charlie Fitzgerald, a lifelong Easton resident whose mother remembers her grandparents taking her to Mass by horse and buggy at the old Saints Peter & Paul Church on Goldsborough Street. Stephanie Handy, a retired graphic designer, helped design all of the marketing materials.

Along with Reichbauer, other project contractors are Greg Torchio of Torchio Architects in Centreville, Michael Hiner of Willow Construction in Easton, Julie Carroll and Barry Griffith of Lane Engineering in Easton and Eickhof Columbaria, Inc., of Crookston, Minnesota.

The columbarium and cemetery “seemed to mean so much to the community,” Bonan said. “So many people are so supportive and excited about it, and so many people have offered to help that it’s been a very rewarding, exhausting experience.”

For more information about the columbarium and cemetery, including videos, illustrations, rules and guidelines, and frequently asked questions, please visit ssppeaston.org.

There are numerous opportunities to make gifts in memory of a loved one or a named gift. Several people have made gifts ranging from the large crucifix in the Welcoming Patio, to the stained-glass wall in the Pavilion, to several benches.

For a complete information packet, which includes pricing and maps showing what is available for sale, contact Beth in the parish office at 410-822-2344 or parishoffice@ssppeaston.org. To make a purchase or gift, contact Beth who will schedule an appointment with Fran and John Wolfe, who are handling sales.