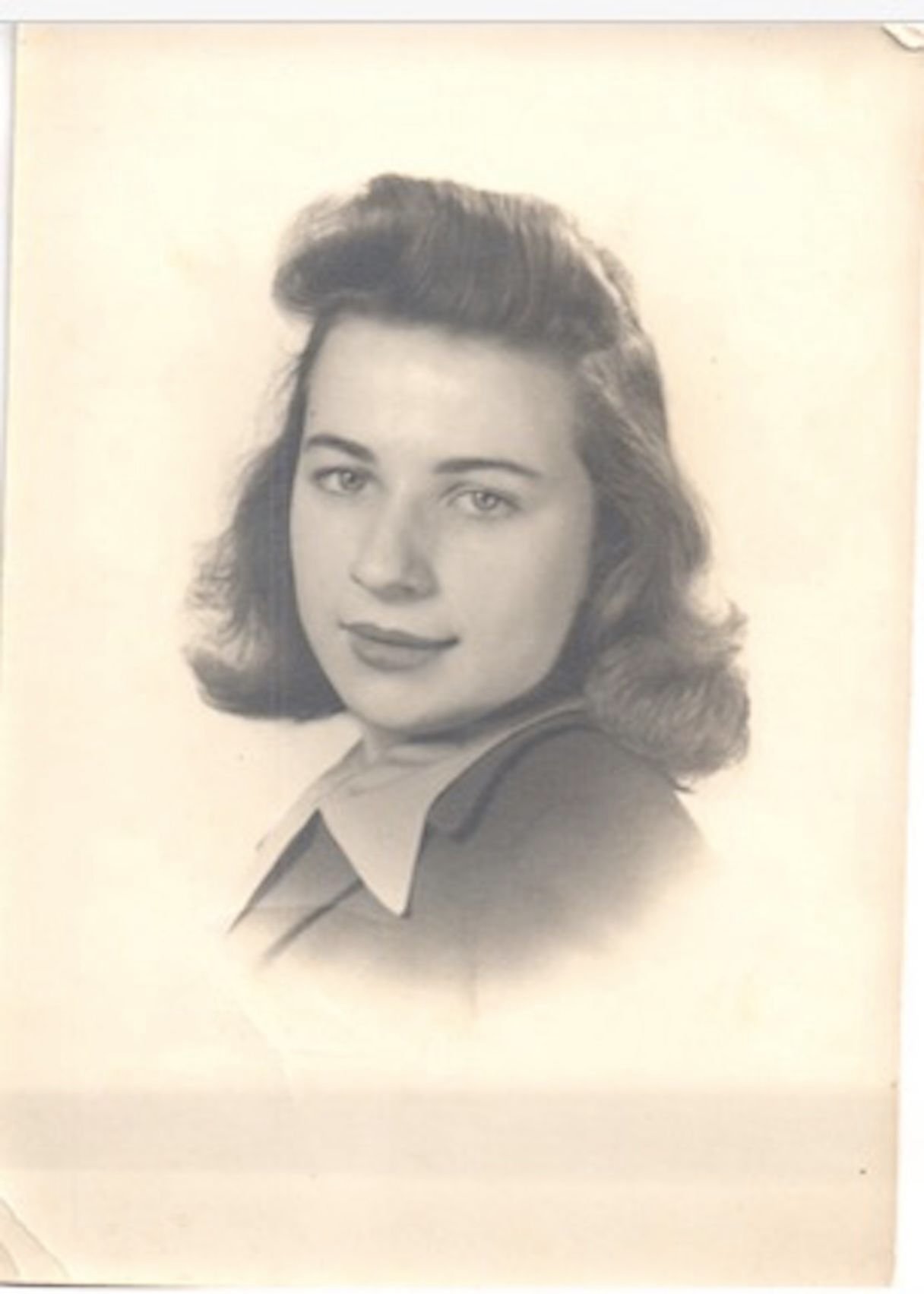 Sylvia Jones in her younger years. 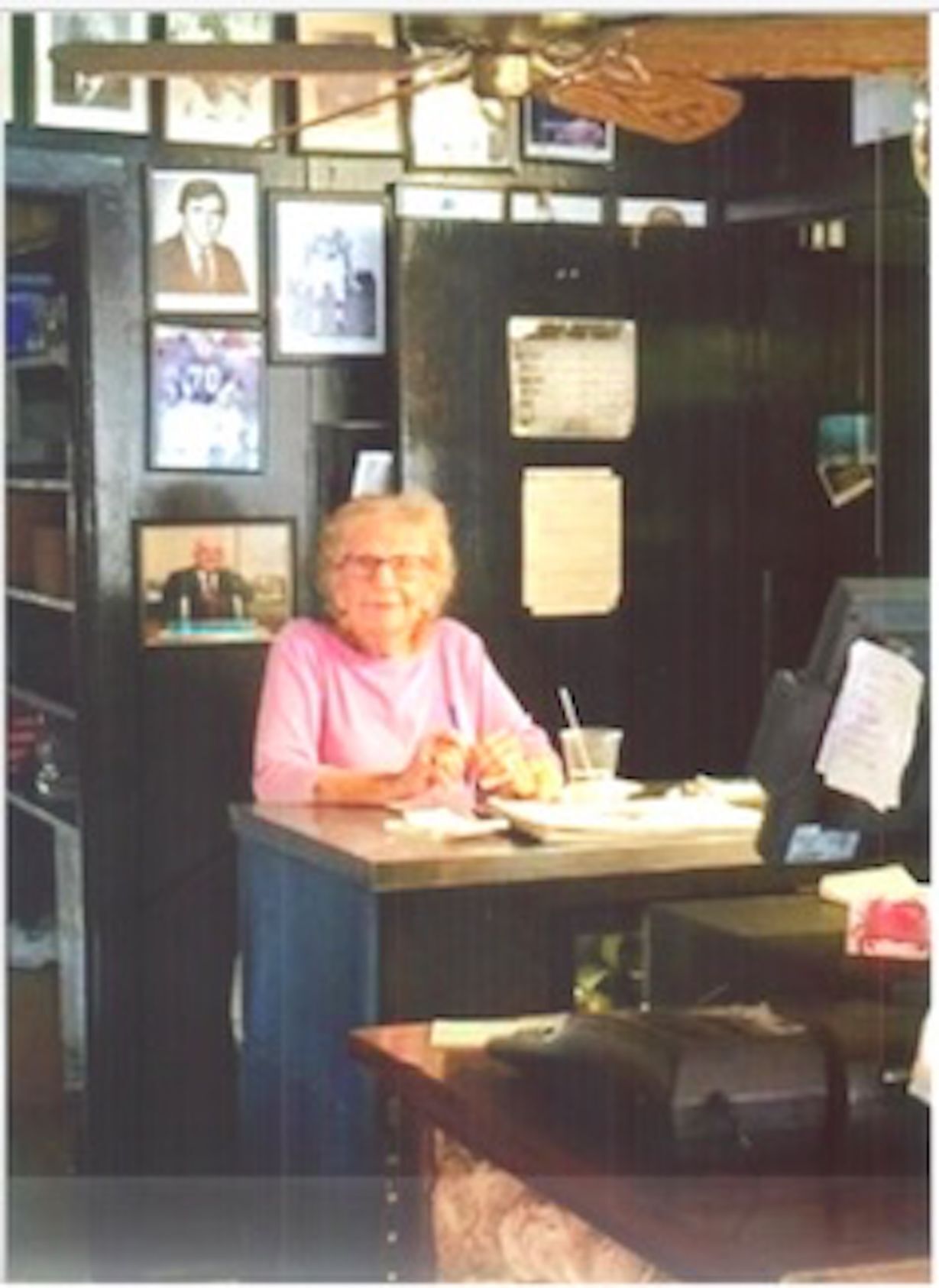 Sylvia Jones at The Crab Claw. 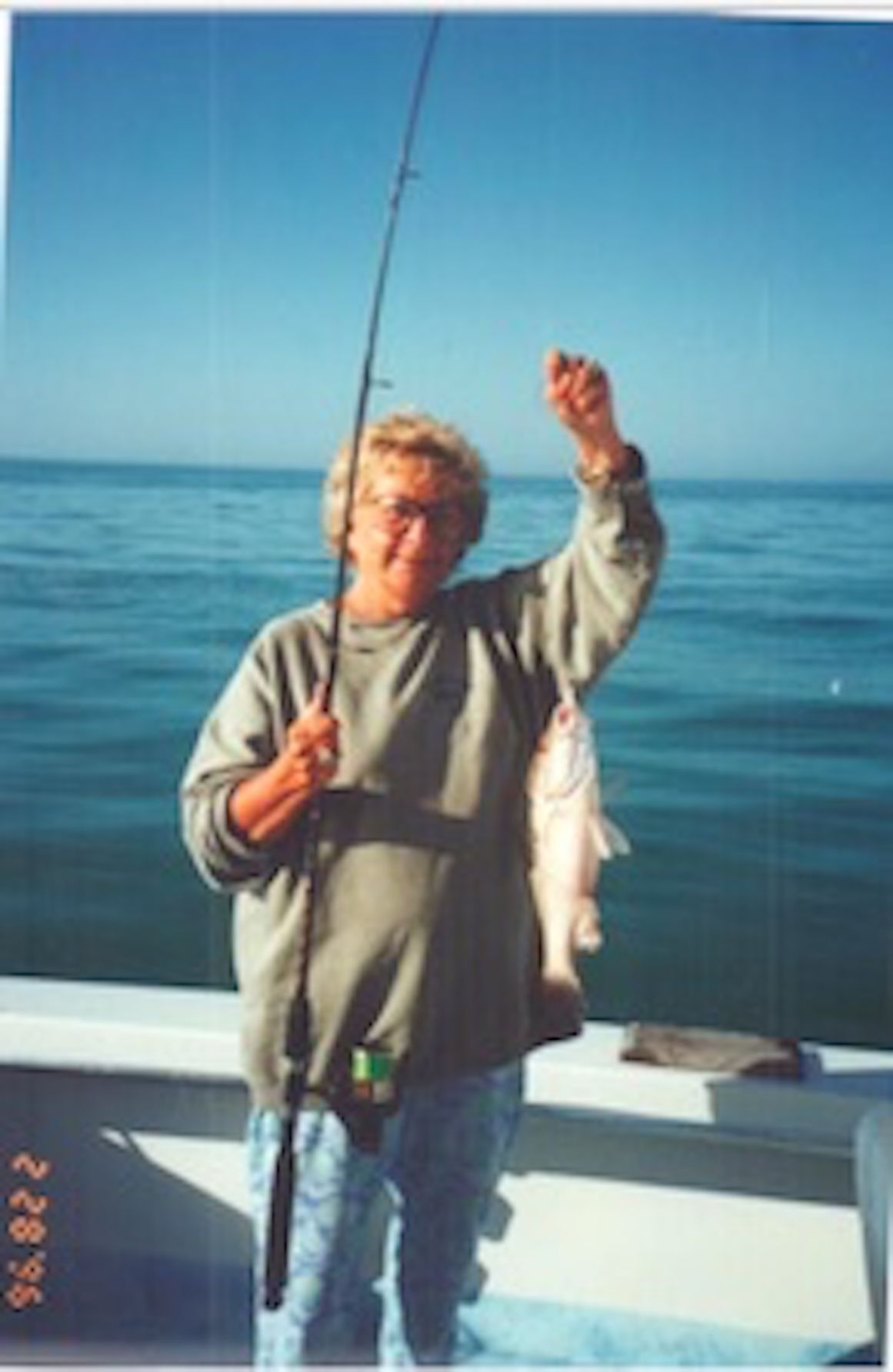 Sylvia Jones, the founder of The Crab Claw, passed away peacefully on Nov. 2. 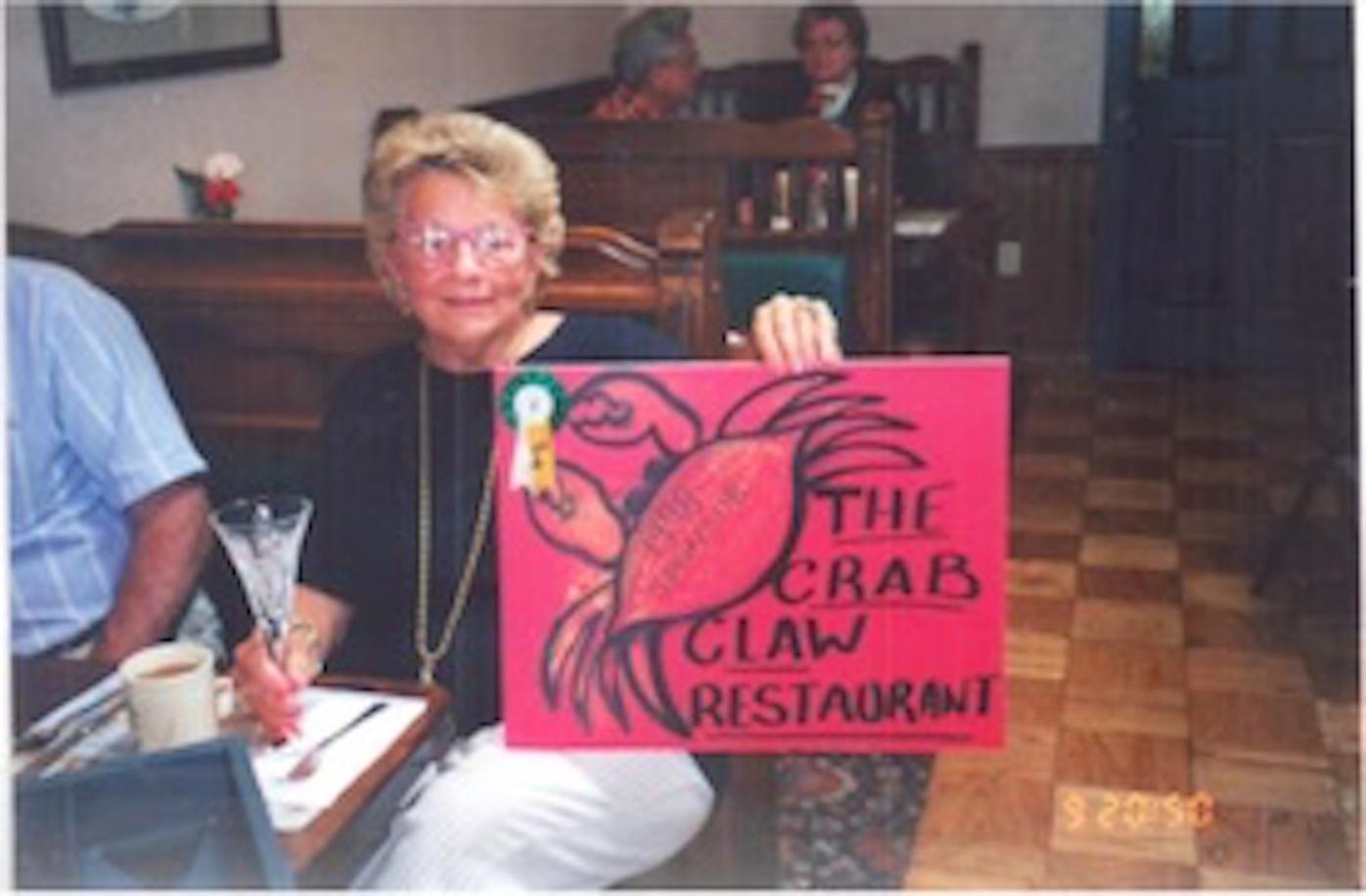 Sylvia Jones was passionate about helping the community and her employees at The Crab Claw, which she founded in 1965.

Sylvia Jones in her younger years.

Sylvia Jones at The Crab Claw.

Sylvia Jones, the founder of The Crab Claw, passed away peacefully on Nov. 2.

Sylvia Jones was passionate about helping the community and her employees at The Crab Claw, which she founded in 1965.

ST. MICHAELS — Local icon, charitable donor and beloved community leader Sylvia Jones, who founded The Crab Claw in 1965 and helped establish St. Michaels as one of the most popular tourism destinations in the country, died on Nov. 2. She was 93.

Jones not only helped establish St. Michaels as a nationally-renowned town, but, as a savvy business woman, she brought economic prosperity to the small community in the late 20th century.

With her husband, Jones transformed an old building, formerly owned by a clam company, into an iconic seafood destination where diners can still grab steamed shrimp and succulent crab meat on the docks of the Miles River. Famous visitors to the 55-year-old Crab Claw include Whoopi Goldberg and Vince Vaughn, and it remains one of the more popular seafood restaurants on the glistening waters of the watershed.

Though she was a business leader of legendary status in the town, Jones is most known and remembered for becoming the unofficial mother of St. Michaels.

She took employees, particularly high-school and college students, under her wing, and mentored the youth, encouraging good behavior and a strong work ethic. The restaurant hires 80 employees during its peak season.

“Sylvia was a pillar in the St. Michaels community, employing generations of local young people. She believed hard work was rewarded and set the example for the youth of Talbot County,” she wrote. “To this day, her former employees credit her with the work ethic that helped make them successful in their lives. She was most passionate about her customers, her employees and serving the best seafood on Maryland’s Eastern Shore.”

Jones also donated generously to charities and worked with Habitat for Humanity to provide affordable housing for the community, especially for her own struggling employees. The business owner helped expand the annual Christmas in St. Michaels event during its early days, too.

After more than five decades of service, Jones served as vice-president until her death, though she played a less active role since 2018. Still, The Crab Claw founder always drove around with a license plate that read: “Crab.”

Following her passing, locals have mourned her death and expressed thanks for her devotion to the town. Tad Dupont, a town commissioner and treasurer, expressed his condolences and praised her legacy.

“It’s a huge loss to the community, she’s a huge part of the history of this town,” he said. “She was, early on, the community. She’s donated to hospices, donated to Christmas in St. Michaels. And I can’t (say) all of them because it’s too big. She’s a legend.”

She was born Sylvia Harrison in Easton on April 19, 1927, but grew up on Tilghman Island. Her parents, Randolph and Lola Harrison, owned a charter fishing business, Blue Haven, and The Bridge Restaurant.

After graduating from St. Michaels High in 1944, she went to the University of Maryland for a year before returning to work with her parents at the restaurant, launching her career in the hospitality industry.

She married William Jones and, in 1965, they bought an old building owned by the Eastern Shore Clamp Company and flipped it into a bustling seafood restaurant. Her husband, Bill, was known as a great seafood cook, while she managed the business side.

“He was buying crabs and oysters and we were selling them by the truckload,” Jones recalled in a 2015 interview with The Star Democrat.

In the 1970s and ‘80s, the restaurant was so popular it had a boardwalk train that drove customers around on a 15-minute tour of St. Michaels.

The business still thrives, but in 2015, Jones reflected on the legacy of her business. She acknowledged that seafood prices were rising and there was more competition.

“It’s different today,” she said in an interview with The Star Democrat. “It’s very competitive and it’s hard.”

Still, her daughter, Jones-Wass, expect another 50 years of The Crab Claw, because she considers it a staple of the community that her mother cherished. Jones was always proud of her restaurant, but even more proud of the town she worked in. She wrote on St. Michaels’ tourism website that the best thing about the job was the community.

“The opportunity to live and work in a small town atmosphere is the best thing about St Michaels,” she wrote.

Her mother’s lessons had a profound impact on Jones-Wass. After college, she returned home to join the family business, and now runs The Crab Claw as its president, keeping the family spirit alive.

“She touched so many different people’s lives,” said Jones-Wass. “She was a very generous, caring and loving woman, and she has had a lasting impact on me. She was very strict and stern, but always very humble, getting the job done and doing it right.”

The owner of The Crab Claw was strict — but she instilled a sense of spirit and drive in people, particularly her employees. She always pushed them to be the best they could be, said Wayne Bridges, the general manager of The Crab Claw.

Bridges joined the restaurant in 1978 as a high-school student, and Jones soon worked him into shape, telling him that if you’re going to “do a job half-as hard, don’t do it at all.”

“She was stern and a hard-worker but she had a golden heart,” he said. “We respected her so much. She wasn’t there pointing fingers, she was right there in the trenches with us, washing dishes, setting tables.”

Bridges left to join the navy and went to college, but Jones remembered him and called him up one day, saying she heard he had graduated and if he was interested, there was a job for him. He took it.

“You knew things would be just fine when she was here,” said Bridges. “The town is going to miss her so much.”

Jones had a lasting impact on those outside of work as well, helping to feed, clothe and shelter the needy in town.

Jones donated frequently to charities across the board, but her work with Christmas in St. Michaels helped establish a cultural and meaningful event, said the founder Mary Lou McAllister.

“Sylvia was always very supportive of Christmas in St. Michaels,” she wrote in an emailed statement, “generously holding our Breakfast with Santa event at the Crab Claw Restaurant for several years in the beginning.”

To Jones-Wass, her mother’s legacy will live on. It is imbued in the town’s spirit and culture now, she said.

“She had a passion for St. Michaels,” her daughter said. “She was very well-respected and loved. And everyone says what a pillar, icon and remarkable woman she was.”

Visitation will be from 11 a.m. to 1 p.m. on Monday, Nov. 9, 2020, at Fellows, Helfenbein & Newnam Funeral Home in Easton, Maryland. Interment will be a private ceremony held at St. John’ s Chapel in Tilghman, Maryland. Due to current COVID-19 restrictions, a celebration of Sylvia’s iconic life will be held at a later time and location.