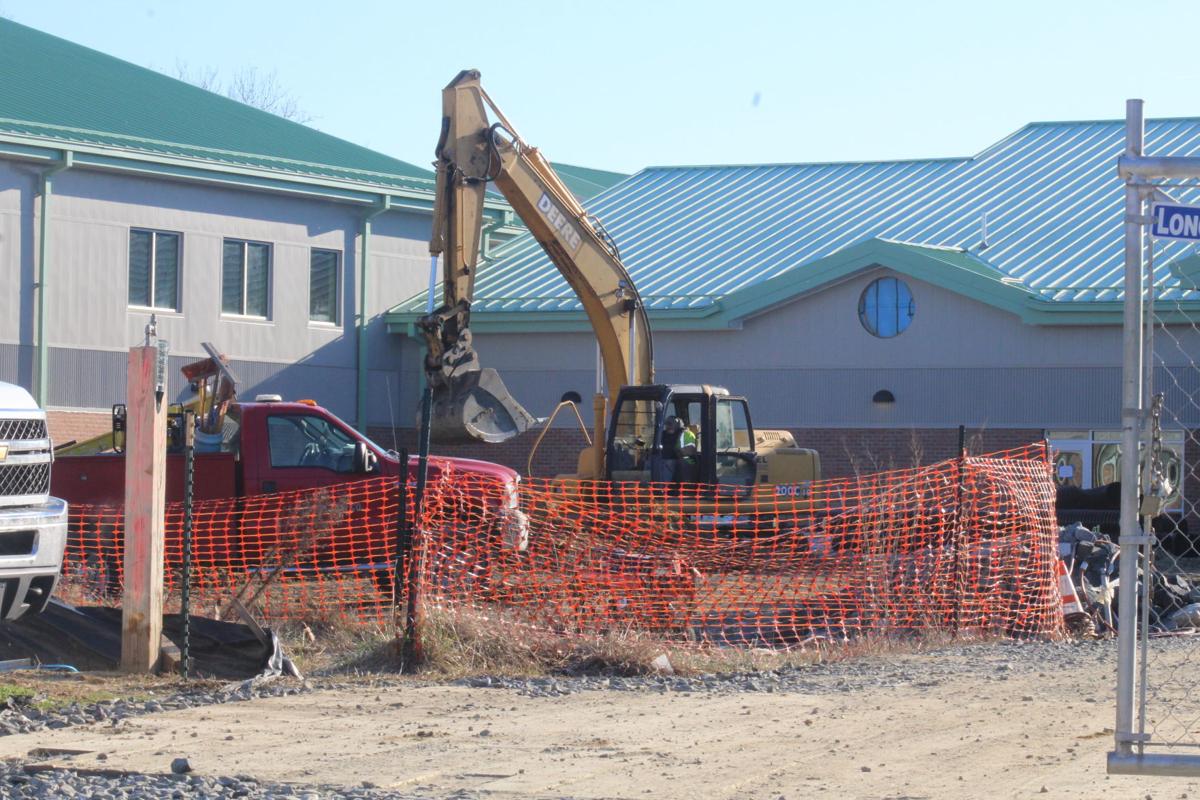 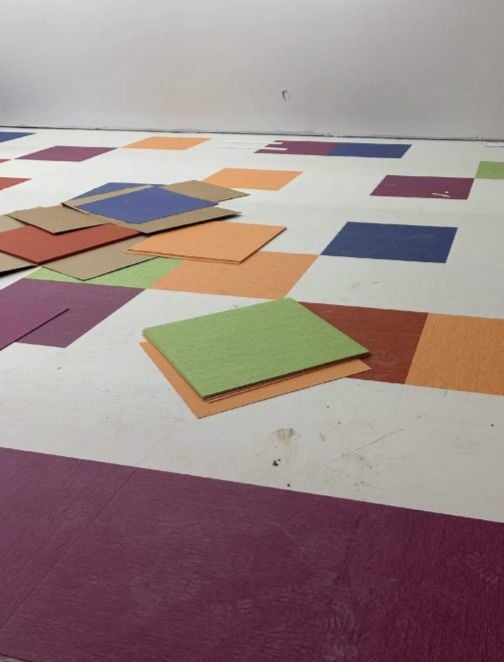 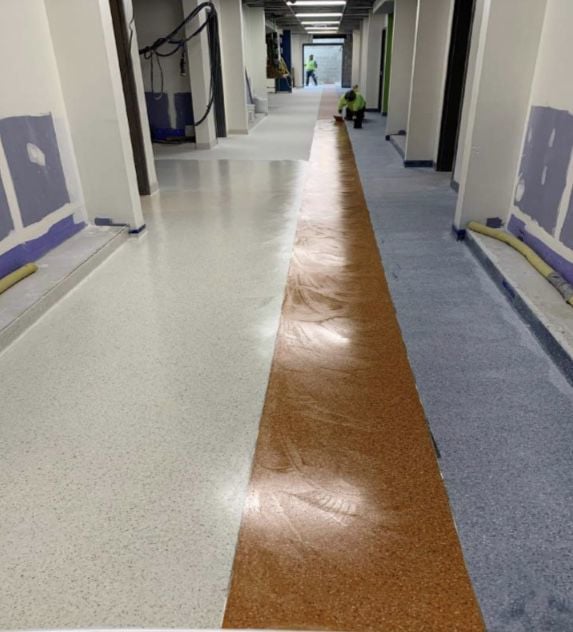 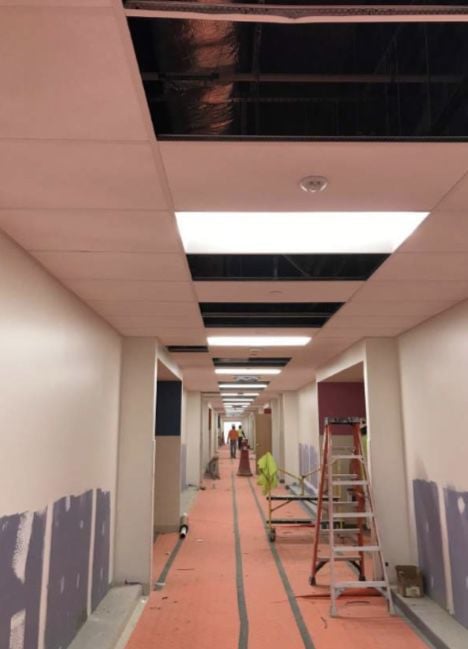 Construction continues along the hallways inside the new Easton Elementary School. 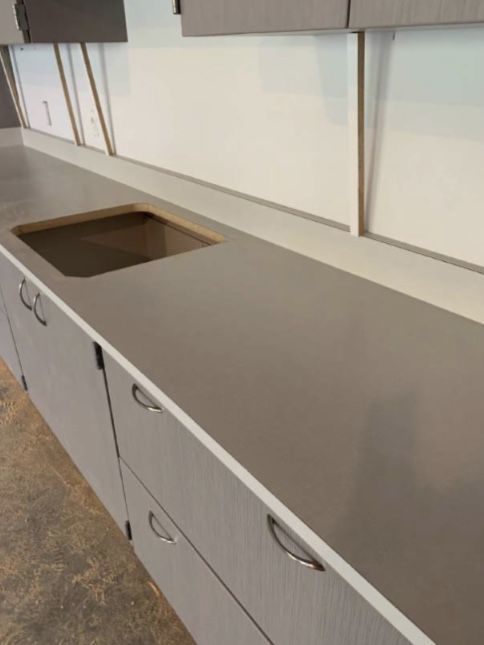 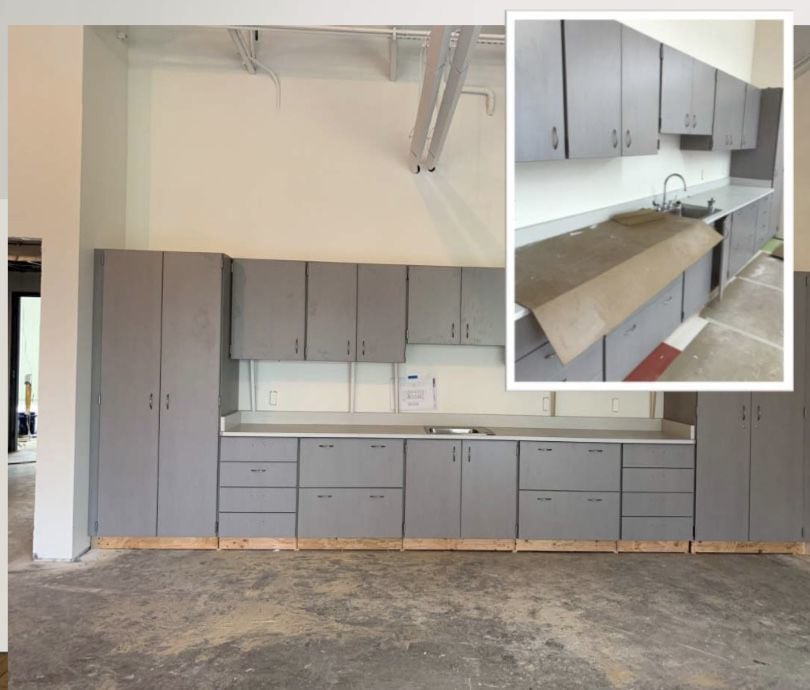 A wide shot (with inset) of a classroom shows a storage unit with a sink and its accompanying countertop space at the new Easton Elementary School.

Construction continues along the hallways inside the new Easton Elementary School.

A wide shot (with inset) of a classroom shows a storage unit with a sink and its accompanying countertop space at the new Easton Elementary School.

EASTON — With construction of the new Easton Elementary School nearing completion, the Talbot County Council reluctantly agreed to dip into its purse to fund a nearly $100,000 “unforeseen” building design cost.

Plant Operations and Maintenance Manager Kevin Shafer made the request of the council during a Tuesday, Jan. 14 meeting, citing an unfunded state mandate that a third-party architect check off the building’s sustainability compliance under the Leadership in Environmental Energy Design (LEED) rating system.

The system, which rates buildings either certified, silver, gold or platinum — with platinum being the highest rating — is designed to ensure that new, state-funded buildings incorporate green energy sources and prioritize a design’s environmental sustainability.

Shafer said the $98,383 cost of the state-mandated neutral audit was not included in the initial project expense estimate because the services were not part of the architecture contract negotiation process when Talbot County Public Schools was soliciting the work.

Architect Thomas King, a principal of Noelker and Hull Associates Inc., who also was at the Jan. 14 meeting, told the council, “We thought that rather than include (the audit cost) in our contract in the beginning, we would wait and see what the costs really are.”

“I can tell you they are less than I would have anticipated had I guessed at the beginning,” King said to the council members.

But King said he wasn’t sold on the mandate, adding that the state did away with the third-party requirement in November 2019 after realizing “perhaps this is not the most cost-effective way to spend tax payers’ money.”

“We already hired an expert who supposedly knows what he’s doing. Why do we need another expert to tell the other one what he already knows?” he said — though King admitted the state’s nullification of the mandate was “a little late for this project.”

Council President Corey Pack said the county could have requested to be excused from the mandate had it known that it soon would be rescinded, but “the person was already consulted and has already done the work.”

“Almost $100,000 for this consulting service to tell us what we already knew, which is that we have a LEED design building and it meets all the standards for energy efficiency,” Pack said, repeating what Shafer and King reported to the council before making a motion to approve their request.

But King assured council members the audit wasn’t a total waste because it revealed the EES building design rated “gold” when the project managers were striving only for the mandated silver. That’s “good news,” he said.

King also nodded to his team’s continuous efforts to cut costs during the construction process. He said the elementary school was able to wiggle its way out of including mandated electric vehicle charging spaces, which he said would have cost $14,000 per space.

When he asked the school how many people in the facility currently drive electric-powered cars, he said “the answer was zero” — prompting him to call the mandate “wasteful” and “arbitrary.”

“We said, ‘Well, why do that? Why not just allow for this to be added in the future when we have more electric powered vehicles?” King said, assuring that arrangements have been made to erect electric car charging stations when they become necessary down the road.

As for the third-party audit, the project organizers said the money for that would come from the project’s accounting contingency fund, which they reported had a little more than $200,000 left in it.

During the meeting, the council also set a 6:30 p.m. Tuesday, Feb. 11, hearing for bill 1441, which would officially authorize the county to borrow the remaining $24.8 million balance of its approved $30 million budget.

Talbot County Finance Director Angela Lane said the county already moved $5 million into a capital projects fund and would need to borrow the remaining amount. If approved, the borrowed funds would be repaid through ad valorem taxes.

The price tag for the school project in its entirety is $51 million, with the state kicking in $21.1 million, Lane said.

The new Easton Elementary School is scheduled to be complete in April 2020. Shafer said during a Wednesday, Jan. 15, meeting with the Talbot County Board of Education that the school is currently 84% complete.

He said painting, drywalling, flooring and lighting installation are still underway, with roughly 140 workers working on the school on a daily basis.