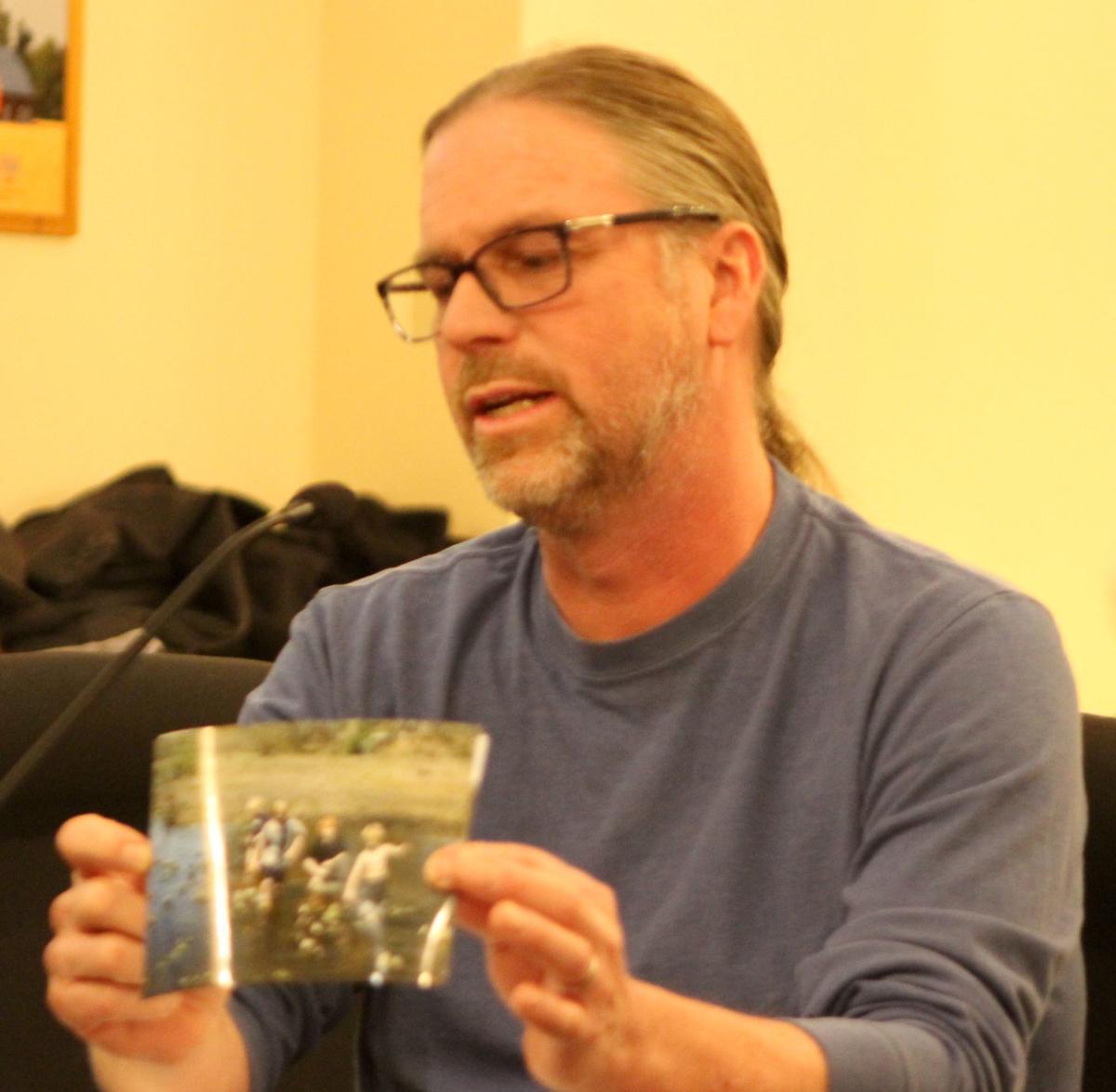 Trappe resident Woody Lambert shows a picture of his children playing in a waterway he says would be negatively affected by a resolution on the Lakeside Project in Trappe. 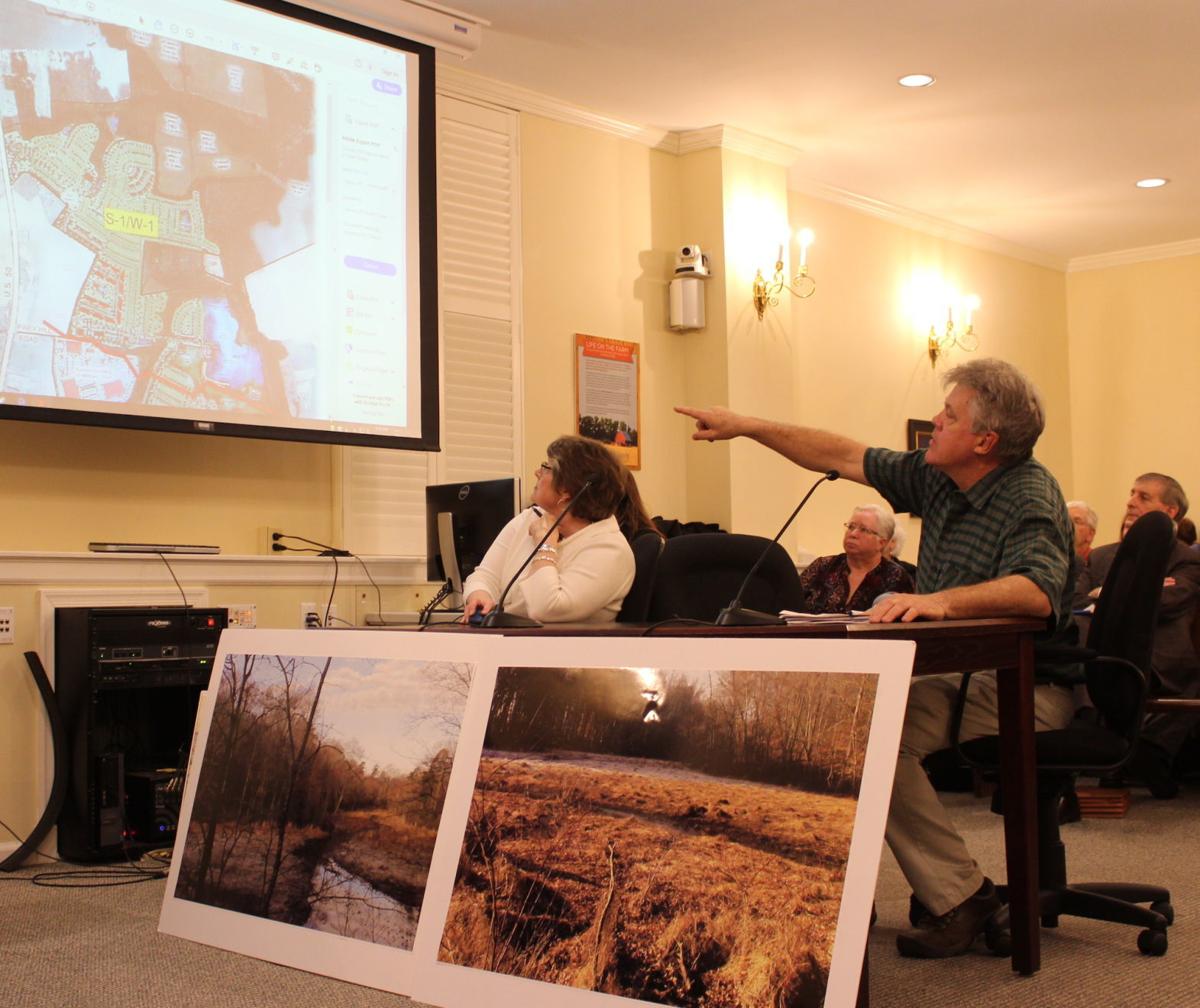 Dr. Steven Harris refers to a map during his public comment against a proposed change to the county's comprehensive water and sewer plan related to the Lakeside Project in Trappe.

Trappe resident Woody Lambert shows a picture of his children playing in a waterway he says would be negatively affected by a resolution on the Lakeside Project in Trappe.

Dr. Steven Harris refers to a map during his public comment against a proposed change to the county's comprehensive water and sewer plan related to the Lakeside Project in Trappe.

EASTON — The Talbot County Council heard public comments for and against a proposed change to the county’s comprehensive water and sewer plan at a meeting on Tuesday evening, Feb. 11 in Easton, and postponed further action until March to clarify the changes.

The resolution before council would change the status of the almost 900-acre Lakeside Project in Trappe (with a proposed 2,600 houses) reclassifying land to allow the construction of a dedicated wastewater treatment system that would meet strict Maryland Department of the Environment guidelines.

However, a proposed amendment introduced by council during Tuesday’s meeting would phase in only part of the development now — with the remainder of the development being phased in later — making a portion of the land eligible for immediate access to water and sewer.

Plans for the large-scale development have been in the works for over 16 years. Balancing progress with environmentally sound wastewater treatment measures in the Chesapeake Bay watershed prompted comments from about a dozen residents and local environmental leaders during the public hearing.

Opponents of the reclassification raised concerns about the proposed Lakeside Project, formerly known as Trappe East.

Bruce Armistead spoke against the resolution, saying that neighbors did not oppose the project, but advocated consideration of alternatives to the siting of the wastewater treatment facility on the project property and the use of effluent spraying.

Dr. Steven Harris, who owns land adjacent to the Lakeside Project, said that the proposal did not align with existing comprehensive plans and did not provide an adequate nutrient management plan.

Nearby resident Barry Gaertner criticized the proximity of proposed effluent spray fields to nearby property lines and watersheds. “Wouldn’t it be more prudent to provide much broader setbacks from all creeks and drainages?” he asked.

Dirk Bartlett urged the council to take their time and review the terms of the original annexation. “I think it makes sense to pause before we allow this,” he said.

Area resident Patty Knauer DeWitt talked about the unusually high quality of the waterways downstream from the proposed project. “It’s absolutely amazing— let’s please preserve this for generations to come,” she said.

Attorney Ryan Showalter spoke on behalf of the Lakeside Project developer and said that the Maryland Department of the Environment regulates the permits and that the proposal fits within the county’s requirements and plans.

Showalter said the spray effluents proposal fits within MDE’s guidance, “The MDE says this water is clean enough to spray within 50 feet of a playground, within 25 feet of a stream.”

Attorney Lyndsey Ryan spoke on behalf of the Town of Trappe, asking the council to approve the amendment. Ryan said the town believed that the development and plans for wastewater treatment were consistent with the county’s comprehensive plan.

Ryan answered questions about the Lakeside Project’s using the existing Trappe wastewater treatment plant. She said the town believed spray effluent to be more environmentally friendly than seeking a increased permit for discharge from the current plant.

Other area residents spoke asking the County Council not to approve the resolution, citing environmental and health concerns.

Due to the proposed changes, council could not vote on the resolution during this meeting, and will revisit the resolution again in March after the Planning Commission and Public Advisory Board reviews the amendment.