From the left, Lt. J.G. Robert Morgan and Ensign Maryjoe Phillips stand at attention with the new United States Naval Sea Cadets Corps unit behind the Centreville American Legion, Post 18, during a recent drill. The Sea Cadets program is offered in many counties where public schools do not offer high school Jr. ROTC training. 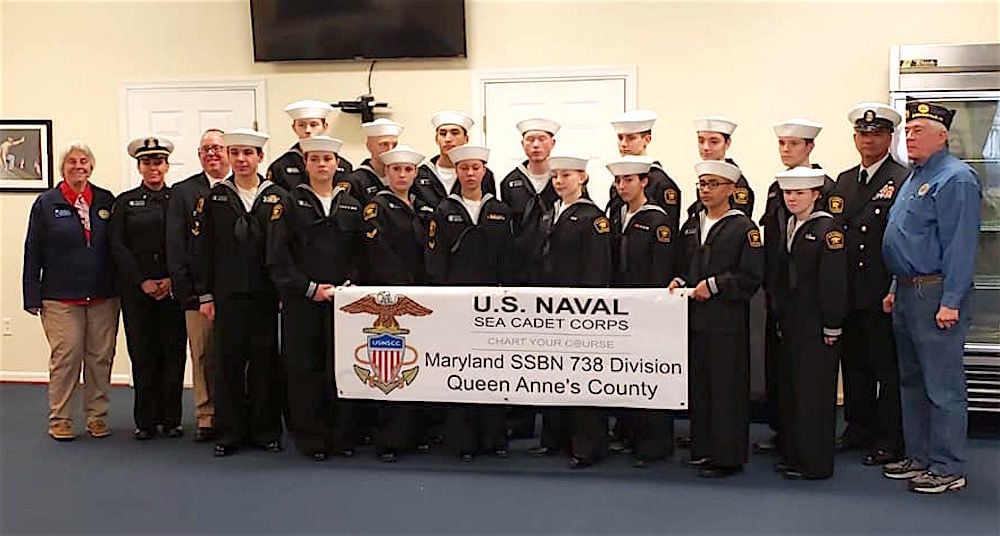 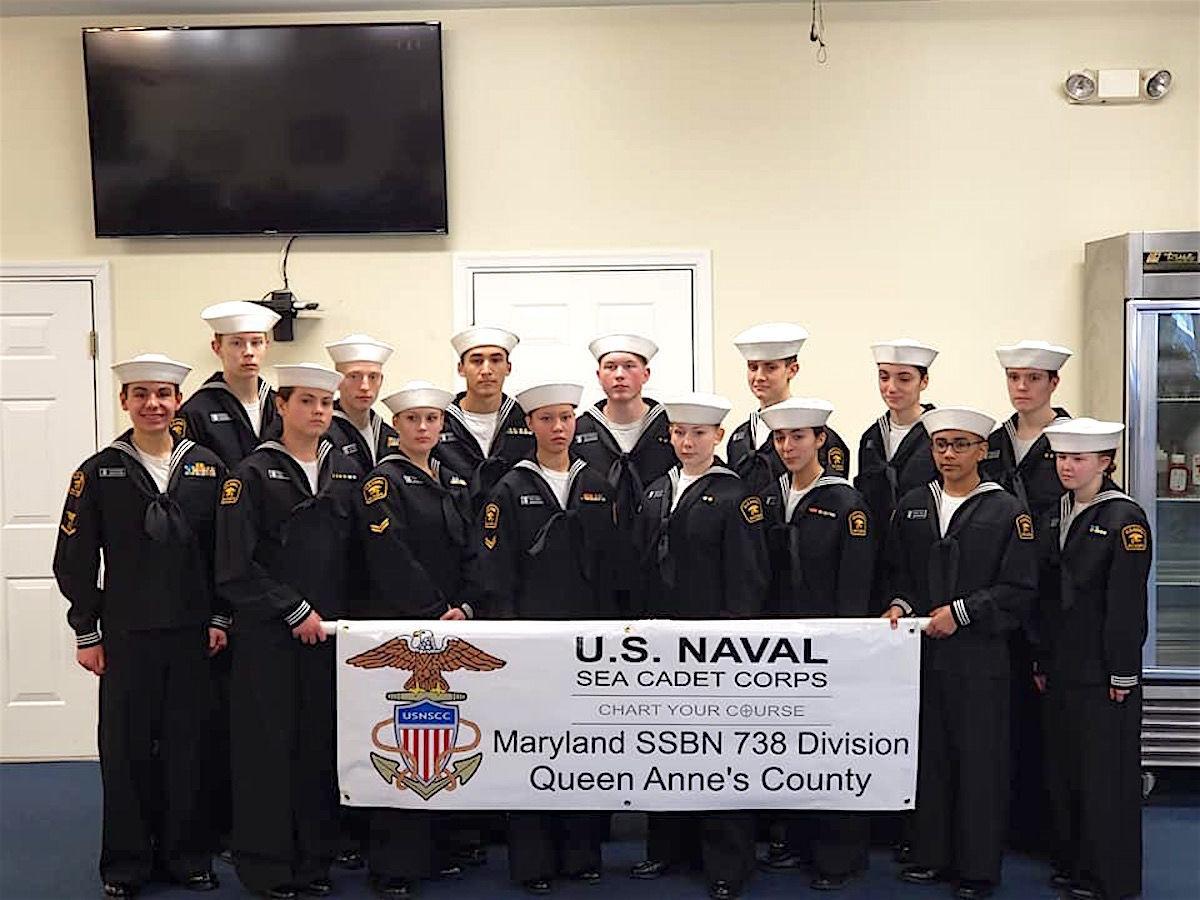 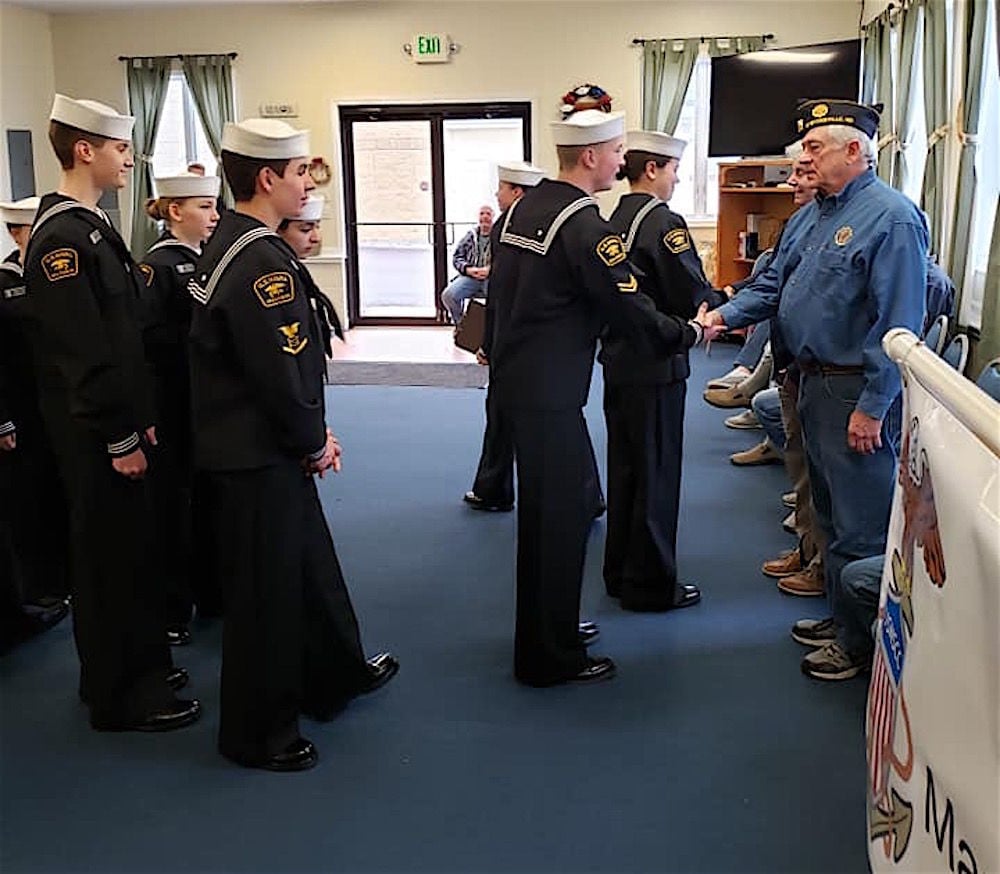 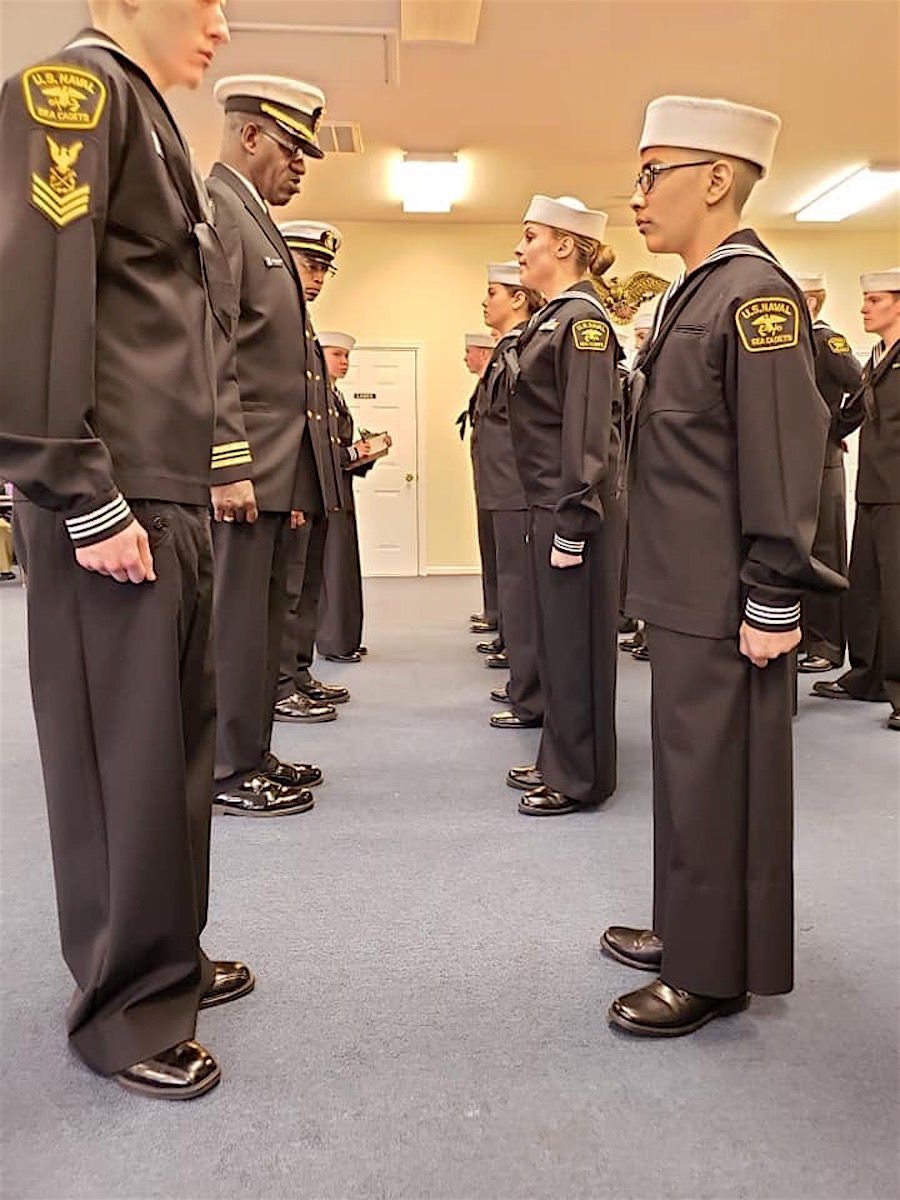 Cadets stand for inspection at the Kent Island American Legion.

From the left, Lt. J.G. Robert Morgan and Ensign Maryjoe Phillips stand at attention with the new United States Naval Sea Cadets Corps unit behind the Centreville American Legion, Post 18, during a recent drill. The Sea Cadets program is offered in many counties where public schools do not offer high school Jr. ROTC training.

Cadets stand for inspection at the Kent Island American Legion.

STEVENSVILLE — During the past year, a new U.S. Naval Sea Cadet Corps unit has formed in Queen Anne’s County. This program is for youth ages 10 to 18, both boys and girls.

Queen Anne’s County Public Schools does not provide a Junior ROTC program found in some other school districts, but the Sea Cadet program provides some of the same training.

The Sea Cadet Corps is a youth leadership development organization that promotes interest and skill in naval disciplines while instilling strong moral character and life skills through leadership and technical programs modeled after the Navy’s professional development system.

As of 2018, there were 394 Sea Cadet units across the country, as well as Guam and Puerto Rico, serving more than 12,000 adolescents. The units operate year round, holding drills, performing in parades, participating in encampments and attending special events. It is the official program for the U.S. Navy and U.S Coast Guard.

It is not a military recruitment program. Cadets are not required to to join the armed services upon graduation, though they do so at high rates.

In 2018, 30% of all graduates went on to two- or four-year colleges not related to military schools or careers in the military.

The Sea Cadet training program is designed to develop an interest and ability in seamanship and seagoing skills; instill virtues of good citizenship and strong moral principles; demonstrate the value of an alcohol-free, drug-free and gang-free lifestyle; and expose cadets to the prestige of public service and a variety of career paths through hands-on training.

Cadets are required to attend and graduate recruit training. This nine- to 14-day training, affectionately known as boot camp, consists of basic military history and instruction including drill and ceremonies; physical fitness training; and both practical and theoretical general knowledge (from knot tying and first aid to firefighting and ship-wide damage control). Trainings are hosted on military bases, campsites and training grounds across the nation in the summer and during winter breaks from school.

Upon graduation from recruit training, the cadets can elect to participate in a variety of advanced trainings, including field operations, vehicle maintenance, music and orchestra school, SCUBA certification, culinary arts, SEAL training and international exchanges. Most, reportedly, are offered for under $200.

The program was created in 1958 for young men. In 1976, the program was expanded to allow females to participate. Cadets hail from diverse backgrounds. Ethnic minorities comprise over 40% of the program, and one out of five cadets is female.

Former cadet Nicholas Lange said, “The Sea Cadets creates a melting pot of cultures that emphasizes the value of each person.”

Vicki Powell, unit training director for the U.S. Naval Sea Cadets, said, “A military program provides exposure to structure and discipline in a challenging environment that stresses both personal accountability and teamwork. Further, the military culture is based on concepts of duty, service and self-sacrifice, which lay the foundation for building a servant leader.”

The Sea Cadet unit in Queen Anne’s County meets the first and third Saturdays of the month during the school year, at 8:50 a.m., at all three American Legions, Post 18 in Centreville, Post 278 on Stevensville and Post 296 in Queenstown, depending on schedules.