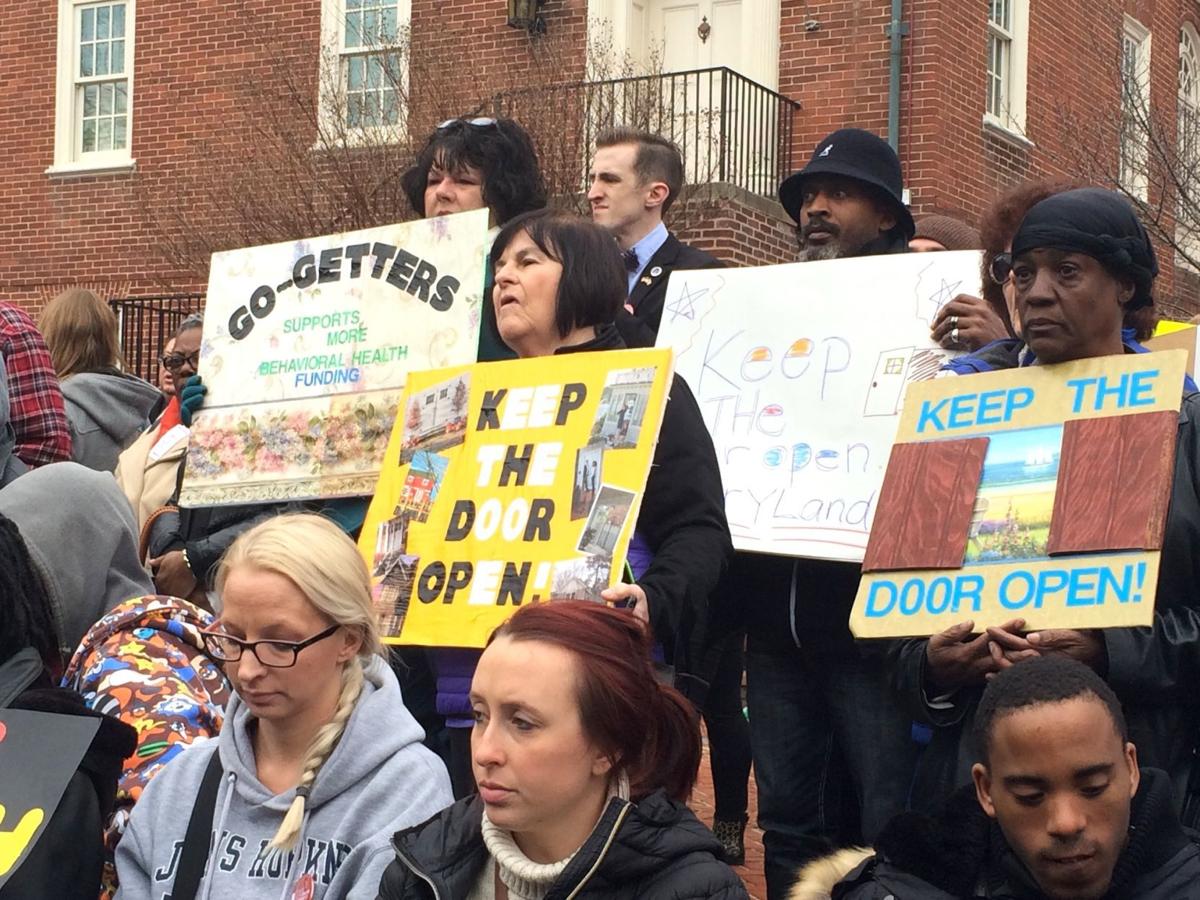 Ralliers hold signs showing support for the Keep the Door Open Act, which would require the state to increase funding for behavioral health care yearly with the rate of inflation, in Annapolis on Thursday, Feb. 25. 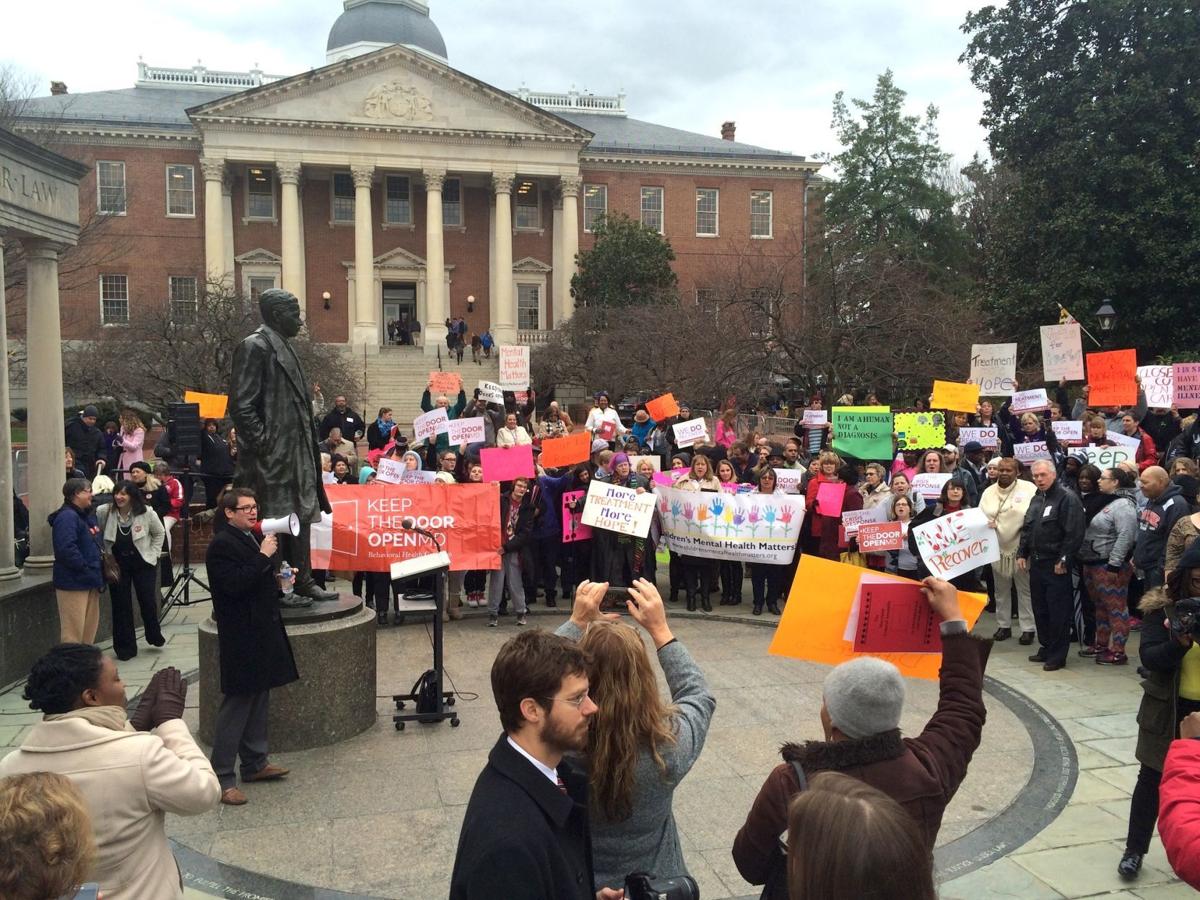 Behavioral Health Coalition spokesman Dan Martin, left with a bullhorn, cheers on a crowd of more than 400 advocates, health care providers, patients and family members of patients at a rally in front of the State House in Annapolis on Thursday, Feb. 25.

Ralliers hold signs showing support for the Keep the Door Open Act, which would require the state to increase funding for behavioral health care yearly with the rate of inflation, in Annapolis on Thursday, Feb. 25.

Behavioral Health Coalition spokesman Dan Martin, left with a bullhorn, cheers on a crowd of more than 400 advocates, health care providers, patients and family members of patients at a rally in front of the State House in Annapolis on Thursday, Feb. 25.

ANNAPOLIS — Andy Shepherd was jobless, homeless in Baltimore, and suffering from alcoholism and depression before arriving 10 months ago at Peer Connection, a recovery program in Salisbury for people with addictions and mental illnesses.

Previously, Shepherd had spent time in and out of 14 rehabilitation centers and five halfway houses, he said, and had a counselor not recommended he try Peer Connection, he might not have survived on his own.

“I was at a place where I just couldn’t function and couldn’t get a foot up,” he said. “I’m doing great now. I’ve got hope again.”

Shepherd joined more than 400 behavioral health advocates, care providers, patients and family members of patients in Annapolis on Thursday to show support for a pair of bills that would ensure funding and increase access to services for people suffering from mental health and substance use disorders.

“Mental health matters,” said Sen. Guy Guzzone, D-Howard, at the rally. “For years and years in our society, we haven’t done a good job.”

Funding for behavioral health — the umbrella term for mental health and substance abuse disorders — has never been mandated in the state’s budget, so it does not automatically adjust with inflation. The Keep the Door Open Act, sponsored by Guzzone, would ensure that funding for behavioral health providers is indexed in the budget beginning in fiscal year 2018, without needing to be renewed by the legislature.

“Behavioral health may not be a household name, but it’s definitely a household need,” said Del. Antonio Hayes, D-Baltimore, who is sponsoring the Keep the Door Act on the House side.

The spending mandate would require an additional $17 million in increased general fund expenditures in 2018, and would increase to $20.6 million by 2021, according to a statement of opposition submitted by the Maryland Department of Budget and Management.

The legislature has increased behavioral health funding to match inflation six times in the past 20 years, with an average annual increase of around .6 percent per year, said Richard Bearman, executive director of Go-Getters, a Salisbury support community for people with behavioral health disorders.

“Over the years, what we have seen is a little here, a little there. It’s been very sporadic,” said Gerry McGloin, executive director of Pathways, a behavioral health treatment and rehab center in St. Mary’s County.

Some health care insurance providers will cover mental health services, but programs like Pathways and Go-Getters, which runs Peer Connection, depend largely on state funding from the Department of Health and Mental Hygiene to run their clinics.

Money has gotten tight, McGloin said, and Pathways has had problems retaining staff and budgeting resources.

About half of all mental health patients also have substance abuse disorders, said McGloin, so programs often treat the two conditions together.

The average lifespan for a person with a mental illness is 25 years below that of the general population because many of them have chronic diseases that they do not know how to take care of on their own, said Bearman.

The Department of Health and Mental Hygiene would be required under the second bill to develop a plan ensuring 24/7 statewide access to behavioral health services like walk-in clinics and mobile crisis teams.

Expanding the current crisis services statewide would require an estimated $33 million more annually, according to a letter submitted by Department of Health and Mental Hygiene in opposition to the second bill.

“What we have now isn’t as much a system as it is a patchwork of services,” Martin said. “It’s time now to really step forward and have the state put together a plan.”

Staffing and equipment for mobile crisis response teams are too expensive for many behavioral health services to maintain, said McGloin.

The Department of Health and Mental Hygiene is already working with counties to develop and expand crisis services, and the task force needed to develop further plans under the second bill would not be worth the extra money and manpower, said Allison Taylor, the department’s director of governmental affairs.

The state needs better access to behavioral health programs like the one that saved his life, Shepherd said.

“This is an indication that our time is coming,” he said.