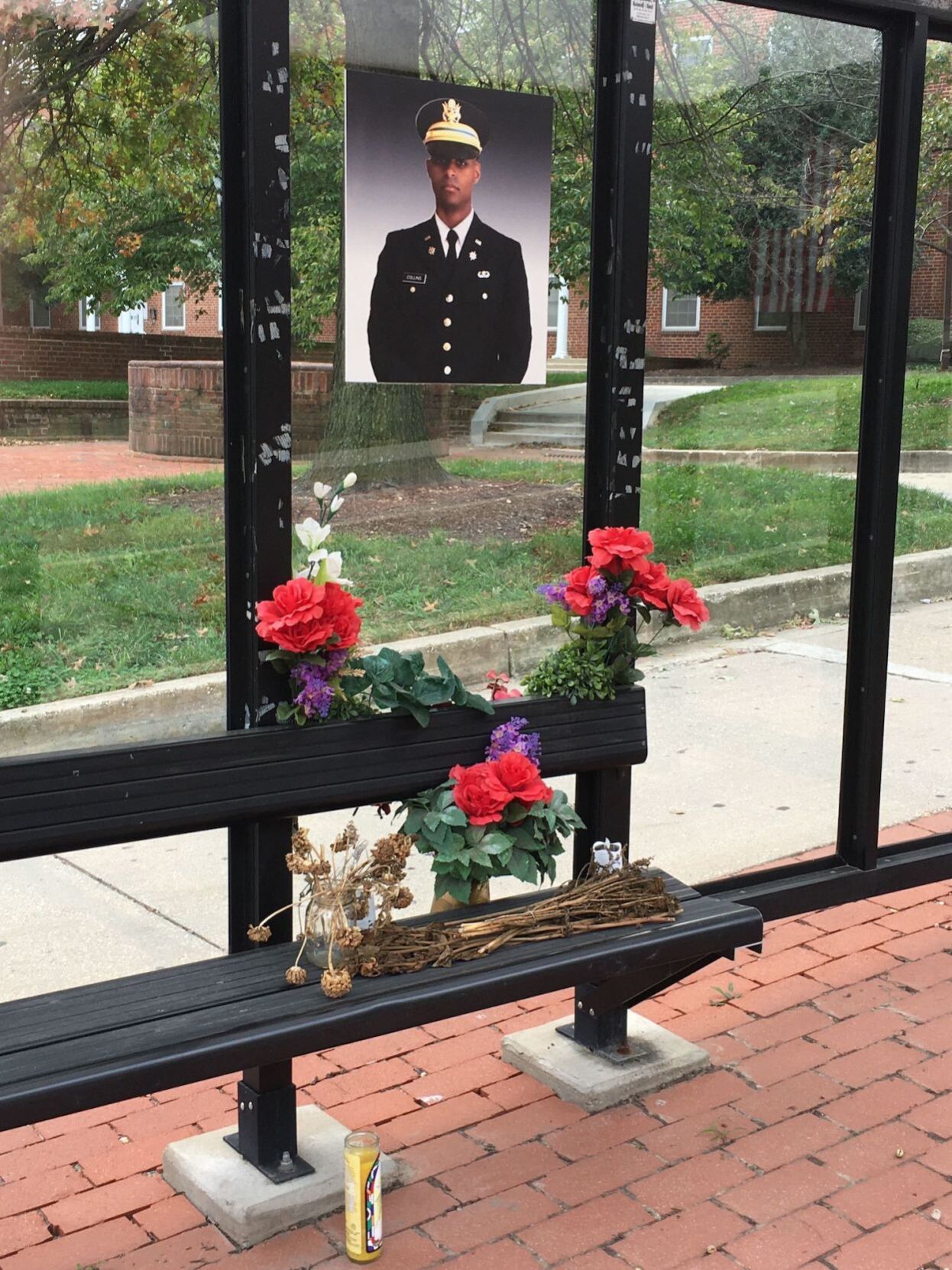 2nd Lt. Richard Collins III was fatally stabbed at a University of Maryland, College Park campus bus stop in 2017 while awaiting an Uber with friends. Sean Urbanski was convicted of first-degree murder but not of a hate crime charge. 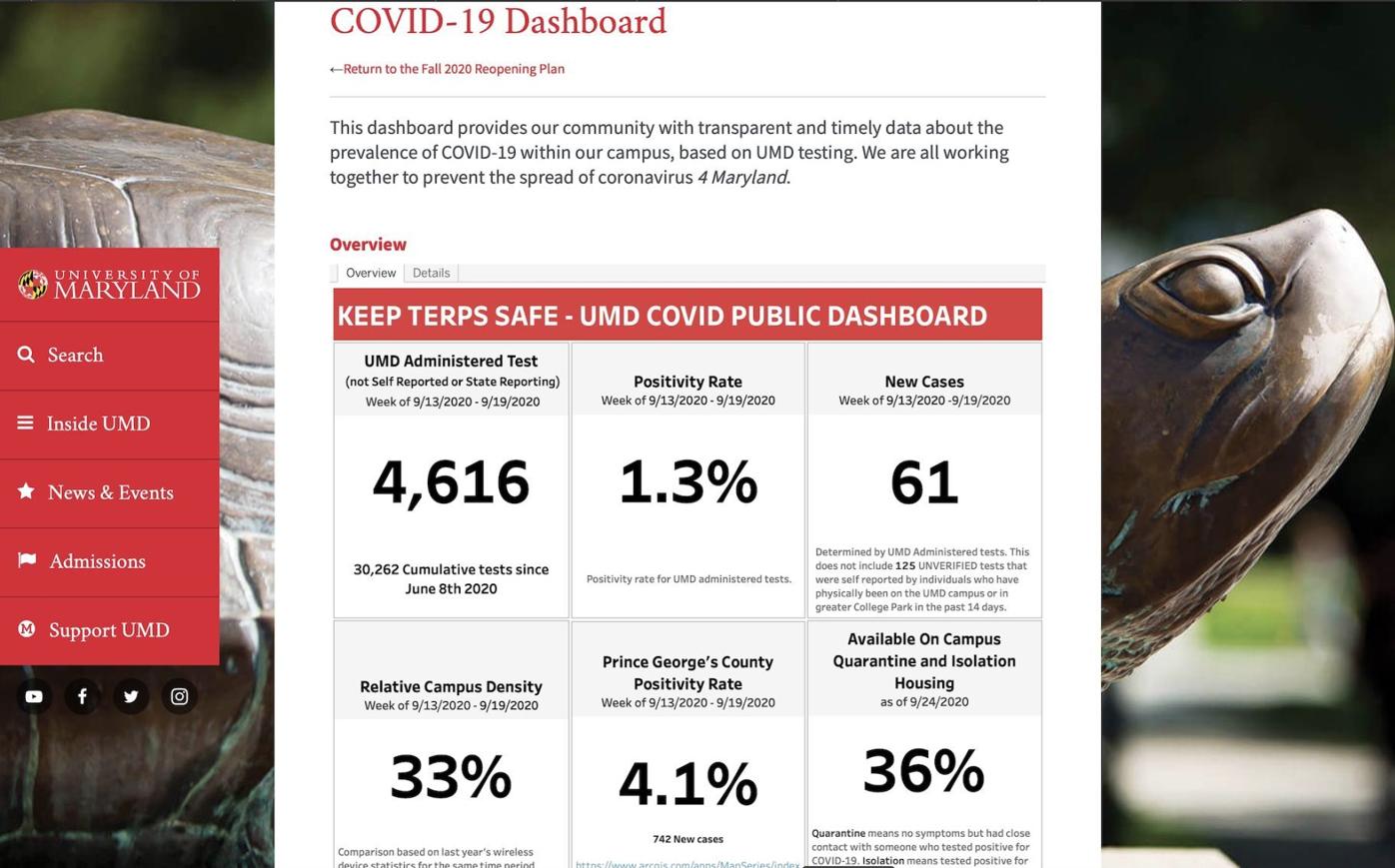 On Aug. 19, the University of Maryland launched a COVID-19 Dashboard, pictured on Sept. 25, to provide public updates on testing, new cases, and the availability of campus quarantine and isolation housing. (https://umd.edu/covid-19-) This follows criticism of the campus after a 2018 outbreak ended in the death of a student.

2nd Lt. Richard Collins III was fatally stabbed at a University of Maryland, College Park campus bus stop in 2017 while awaiting an Uber with friends. Sean Urbanski was convicted of first-degree murder but not of a hate crime charge.

On Aug. 19, the University of Maryland launched a COVID-19 Dashboard, pictured on Sept. 25, to provide public updates on testing, new cases, and the availability of campus quarantine and isolation housing. (https://umd.edu/covid-19-) This follows criticism of the campus after a 2018 outbreak ended in the death of a student.

ANNAPOLIS — An update to Maryland’s hate crimes law, named for slain Army 2nd Lt. Richard Collins III, is one of several anti-discrimination measures that went into effect Oct. 1. Other notable bills address crime, the environment and health care, including an infectious disease mandate named for Olivia Paregol, a University of Maryland freshman who died during a 2018 campus outbreak.

“He was a young rising star, a young military officer about to be commissioned,” state Sen. William C. Smith Jr., D-Montgomery, said of Collins, who was Black.

While Urbanski, who is white, was convicted of first-degree murder in 2019, the judge failed to find enough evidence to convict under the state’s hate crime law at the time.

“The standard, the fact he didn’t actually utter a certain phrase, was not enough to convict him of a hate crime as well,” Smith said. “So, we changed the standard to allow the prior activity to be enough to prove intent. We were able to give that small peace of mind to the family.”

“Particularly in this time when the national environment is certainly very fraught,” Lam said. “There have been concerns about populations and individuals who feel they may be targeted due to their race, color, gender or orientation. To make sure the hate crimes statute covers them is particularly important. They’re all people, after all.”

Below are a few other bills enacted last session which went into effect Thursday. They are grouped by category.

Fair Housing — HB231/SB50. The HOME, or Housing Opportunities Made Equal, Act, whose sponsors include Smith and Del. Brooke E. Lierman, D-Baltimore, expands Maryland’s fair housing policy by prohibiting landlords from discriminating against individuals based on their source of income, to include government subsidized housing vouchers, when renting or selling property.

“I think this law will unleash economic opportunity for thousands of families across Maryland,” said Smith. “A vast majority who have vouchers and are single mothers.”

“The problem globally is a number of men and women who wear traditional hairstyles associated with the Black race have suffered discrimination in the workplace about ‘professional’ hairstyles,” Sen. Smith said. “If they refused to change, they wouldn’t be hired or promoted. It’s something a number of Black men and women think about every single day as they move through society.”

Hate Symbols — HB5/SB161. A new law that will prohibit using symbols of hate to threaten or intimidate others was sponsored by Del. Mark S. Change and Sen. Sarah K. Elfreth, both Democrats representing Anne Arundel County, where in February multiple news outlets reported a noose found in a middle school classroom.

The ACLU reports several states dating back to Illinois in 1961 have already repealed these laws, which were historically used in a discriminatory manner against the LGBTQ community.

Speed Cameras — HB46/SB177. As of Oct. 1, according to this bill sponsored by Del. Alfred C. Carr and Sen. Jeff Waldstreicher, both D-Montgomery, the Motor Vehicle Administration no longer has the authority to suspend a vehicle’s registration if the owner or driver fails to pay a traffic light or speeding ticket. Other penalties may still be assessed.

Strangulation — HB233/SB212. Del. Jesse T. Pippy, R-Carroll and Frederick, and Sen. Susan C. Lee, D-Montgomery, are co-sponsors of two significant pieces of anti-crime legislation. This first bill adds an additional prison sentence of up to 25 years for intentionally strangling someone during an assault.

Sexual Solicitation — HB246/SB231. Pippy and Lee’s second major law enforcement bill bans individuals from seeking the consent of a parent or guardian of a minor when attempting to sexually solicit a minor.

Vehicle Emissions — HB133. Active duty service members who are deployed when their vehicles are due for emissions testing may seek an exemption under this new law.

One of the law’s requirements is that the vehicle owner must certify receiving orders to deploy outside of the U.S. or to a duty station not subject to an emissions program.

Black Bears — HB897/SB353. Maryland’s Department of Natural Resources reports on its website that the state’s black bear population is rapidly growing, partly due to an improving natural habitat. Unfortunately, this environmental success story is tempered by the need to manage increasing human-bear interactions.

The Black Bear Damage Reimbursement fund is one such effort and this year, Del. Wendell R. Beitzel and Sen. George G. Edwards, both Republicans representing Garrett and Allegany counties, sponsored legislation adding pets to the list of damages that can be claimed for reimbursement under the fund.

Firefighting Foam Ban — HB619/SB420. Though this law went into effect Thursday, Del. Patrick Young’s, D-Baltimore, and Sen. Sarah K. Elfreth’s, D-Anne Arundel, legislation actually bans the training use of fire-fighting foams that contain polyfluoroalkyl substances, or PFAS, as of Oct. 1, 2021. As of that date firefighters must use non-fluorinated foam during training.

According to the EPA, PFAS chemicals don’t break down in either the environment or the human body, and can build up over time leading to adverse health effects.

Styrofoam Ban — HB109/SB285. This law bans the use of Styrofoam food and beverage packaging across the state and was sponsored by Sen. Cheryl Kagan, D-Rockville and Gatithersburg, and Del. Lierman.

“This first-in-the-nation-ban is an important step toward eliminating harmful environmental waste,” Kagan said Wednesday in a news release.

Originally passed in 2019, this bill was to take effect July 1, 2020, but was delayed due in part to the pandemic.

This bill, sponsored by Del. Jheanelle K. Wilkins, D-Montgomery, requires meetings convened under the Maternal Mortality Review Program to include stakeholders reflecting the racial and ethnic diversity of women most impacted by maternal deaths in the state.

According to the group’s 2019 annual report, at least 40% of the 15 pregnancy-related deaths in 2017 were among non-Hispanic Black women. It is now required for this data to be taken into account and reflected in the diversity of the program.

Suicide Prevention — SB810. This new law permits the State Highway Administration to post suicide prevention information, which includes a hotline number, on highway electronic signs within five miles of a zone designated as a high risk for suicides. Waldstreicher sponsored the bill.

Nursing Homes — HB 364. This week each hospital or nursing facility in the state must begin ensuring personnel wear an identification tag when providing patient care. This mandate, sponsored by Dels. Sid A. Saab, R-Anne Arundel, and Bonnie L. Cullison, D-Montgomery, comes at a time when elderly care and vulnerability have been critical issues during the pandemic.

Olivia’s Law — HB187/SB329. This legislation enacted last term is named for Olivia Paregol, a University of Maryland, College Park freshman who died during an adenovirus outbreak on campus in 2018.

In response to the current pandemic outbreak, the University of Maryland launched a COVID-19 Dashboard on Aug. 19 to provide public updates on testing, cases, and the availability of campus quarantine and isolation housing.

The General Assembly’s previous session ended early, on March 18, due to the pandemic. The next session is set to start Jan. 13.