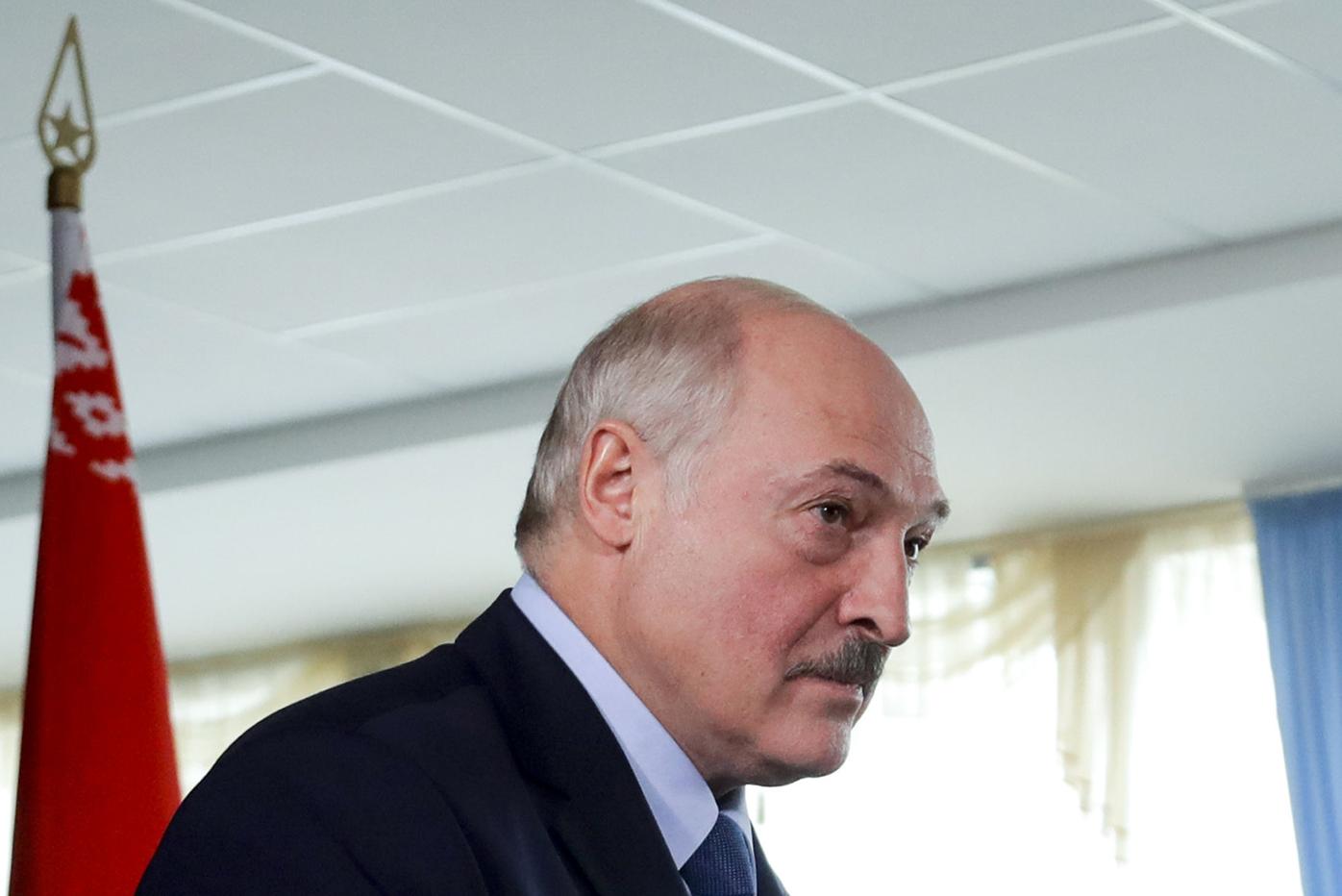 Belarusian President Alexander Lukashenko walks after voting at a polling station with a Belarusian national flag on the left, during the presidential election in Minsk, Belarus, Sunday, Aug. 9. 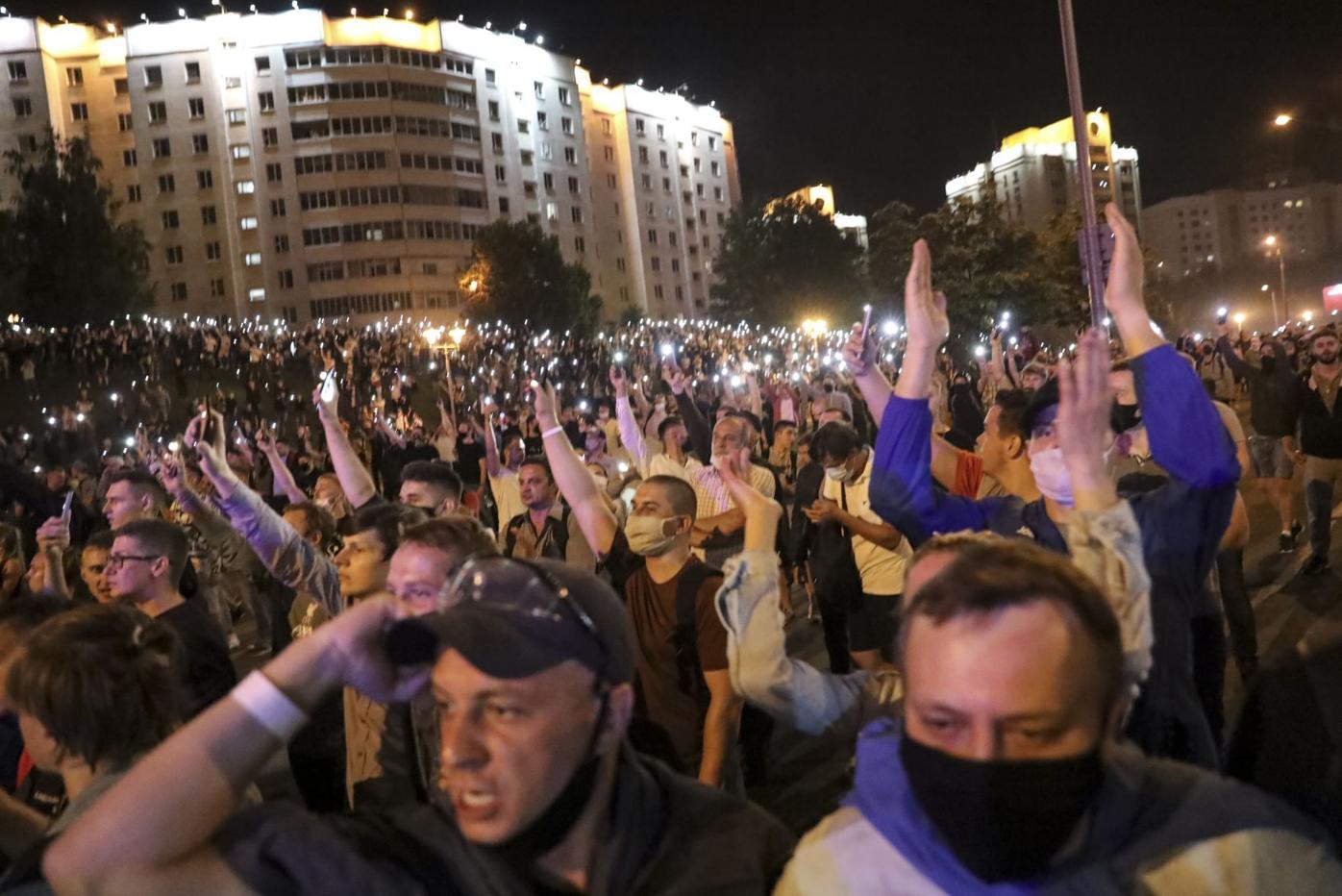 Belarusian President Alexander Lukashenko walks after voting at a polling station with a Belarusian national flag on the left, during the presidential election in Minsk, Belarus, Sunday, Aug. 9.

MINSK, Belarus (AP) — A protester died amid clashes between police and thousands of people gathered for a second straight night Monday in Belarus after official results from weekend elections — dismissed by the opposition as a sham — gave an overwhelming victory to authoritarian President Alexander Lukashenko.

Interior Ministry spokesman Alexander Lastovsky said the victim was part of a crowd of people protesting results of Sunday’s presidential vote. The protester intended to throw an explosive device, but it blew up in his hand and killed him, Lastovsky said.

The death came amid demonstrations in at least four areas of Minsk that met with a harsh response from police who tried to disperse protesters with flash-bang grenades and rubber bullets. Near the Pushkinskaya subway station, some 3,000 protesters tried to build barricades.

Lukashenko’s hardline rule began in 1994 and his victory would extend it until 2025. He derided the opposition as “sheep” manipulated by foreign masters.

Dozens were injured and thousands detained hours after Sunday’s vote, when police brutally broke up mostly young protesters with tear gas, water cannons and beat them with truncheons. Rights activists said one person died after being run over by a police truck — which authorities denied.

Election officials said Lukashenko won a sixth term in office with 80% of the vote, while opposition challenger Sviatlana Tsikhanouskaya got 10%. Tsikhanouskaya submitted a formal request for a recount to the Central Election Commission.

After submitting the request, both Tsikhanouskaya and her spokeswoman remained unreachable. Upon leaving the commission’s headquarters she said “I have made a decision, I must be with my children.”

It was unclear if her statement meant that she was heading abroad to reunite with her children, whom she had earlier sent to an unspecified European country after receiving threats.

Later, about 1,000 protesters gathered near a big shopping mall in downtown Minsk before being dispersed by police. The Viasna rights group said protesters also gathered in several other Belarusian cities, including Brest, Mogilev and Vitebsk, where detentions also took place.

The police crackdown drew harsh criticism from European capitals and will likely complicate Lukashenko’s efforts to mend ties with the West amid tensions with his main ally and sponsor, Russia.

US Secretary of State Mike Pompeo said in a statement that the election was not “free and fair” and added: “We strongly condemn ongoing violence against protesters and the detention of opposition supporters.”

Lukashenko, whose iron-fisted rule since 1994 has fueled growing discontent in the ex-Soviet nation of 9.5 million, warned that he wouldn’t hesitate to use force again. He argued that the protesters met a due response overnight after injuring dozens of police officers and attempting to take control of official buildings in several Belarusian cities.

“We will not allow them to tear the country apart,” he said.

The 65-year-old former state farm director asserted that the opposition was being directed from Poland and the Czech Republic, adding that some groups in Ukraine and Russia could also have been behind the protests.

“They are directing the (opposition) headquarters where those sheep don’t understand what they want from them,” he said in a dismissive reference to Tsikhanouskaya and her campaign.

The Interior Ministry said 89 people were injured during the protests late Sunday and early Monday, including 39 law enforcement officers, and about 3,000 people were detained, some 1,000 of them in Minsk.

Tsikhanouskaya, a 37-year-old former English teacher without any prior political experience, entered the race after her husband, an opposition blogger who had hoped to run for president, was arrested in May. She has managed to unite fractured opposition groups and draw tens of thousands to her campaign rallies — the largest opposition demonstrations since the 1991 collapse of the Soviet Union.

“We don’t agree with (election results), we have absolutely opposite information,” Tsikhanouskaya told The Associated Press on Monday. “We have official protocols from many poll stations, where the number of votes in my favor are many more times than for another candidate.”

The coronavirus-induced economic damage and Lukashenko’s swaggering response to the pandemic, which he airily dismissed as “psychosis,” has fueled broad anger, helping swell the opposition ranks. The post-election protest, in which young demonstrators — many of them teenagers — confronted police, marked a previously unseen level of violence.

Internet and mobile networks went down after the polls closed as authorities tried to make it more difficult for protesters to coordinate.

“The more they beat us, the less we believe in the official results,” said Denis Golubev, a 28-year-old IT specialist who joined the protests.

The European Union condemned the police crackdown and called for an immediate release of all those detained.

In a joint statement, EU foreign policy chief Josep Borrell and the EU commissioner responsible for relations with Europe’s close neighbors, Oliver Varhelyi, lamented that “the election night was marred with disproportionate and unacceptable state violence against peaceful protesters.”

In the early 2000s, the United States and the European Union slapped sanctions against Lukashenko’s government, but they lifted most of the penalties in recent years after Lukashenko freed political prisoners and allowed some opposition protests.

The Trump Adminsitration has recently sought to improve long-strained ties with Lukashenko, who some officials believe could be a valuable partner in countering Russian influence in eastern and central Europe. In early February, Pompeo became the first U.S. chief diplomat in more than 25 years to travel to Belarus, and offered to sell U.S. oil and gas to the country to reduce its dependence on Russian energy.

The administration has also nominated an ambassador to Belarus who, if confirmed, would be the first to the country since 2008.

Throughout his tenure, Lukashenko has tried to exert pressure on the Kremlin with the prospect of normalizing ties with the West in a bid to win more Russian subsidies. But the violent crackdown now appears likely to derail Lukashenko’s hopes for those ties as Russia exerts pressure on its small neighbor.