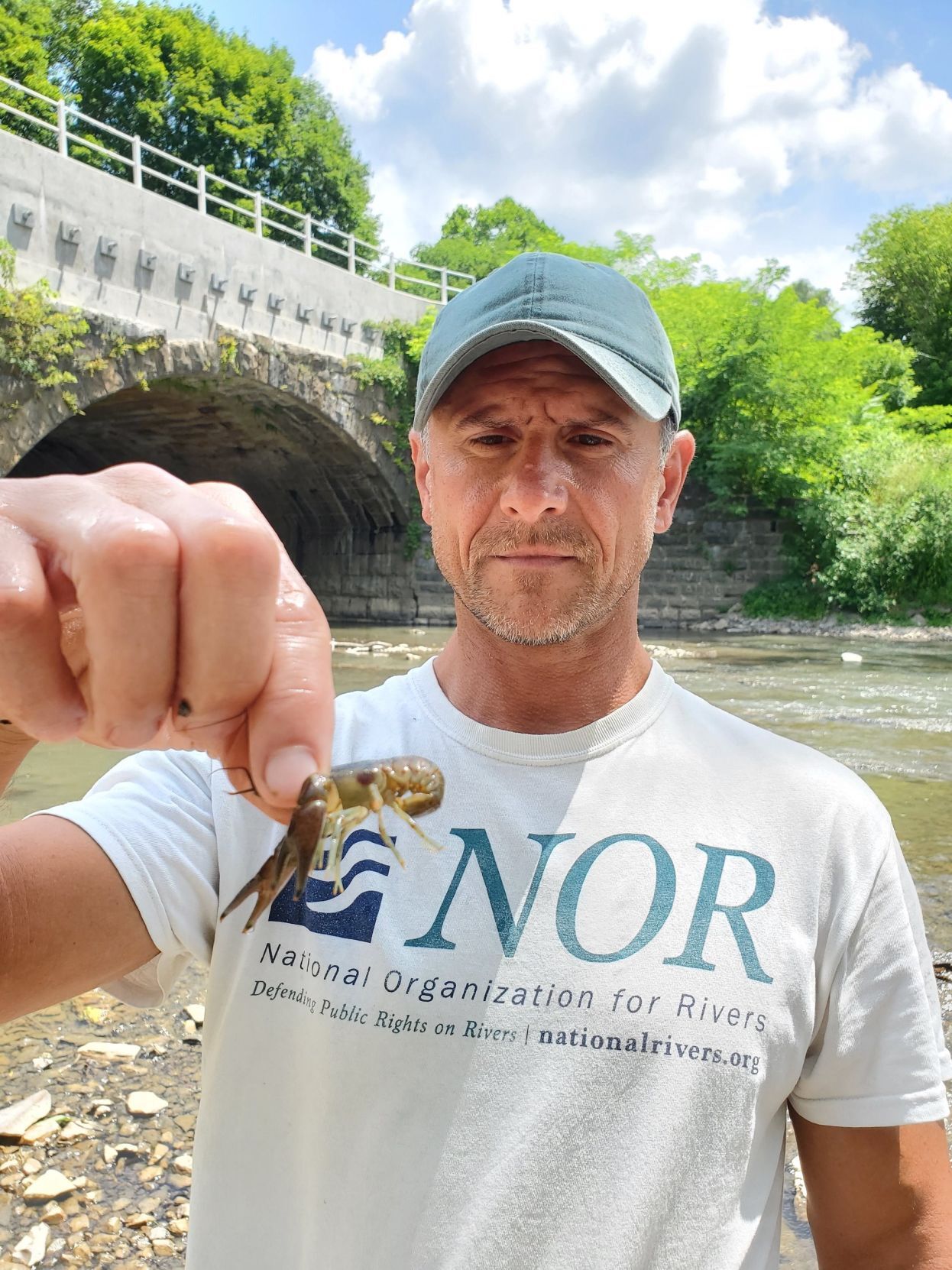 Researcher George Merovich holds a captured specimen of the nonnative rusty crayfish near the Juniata River in central Pennsylvania. 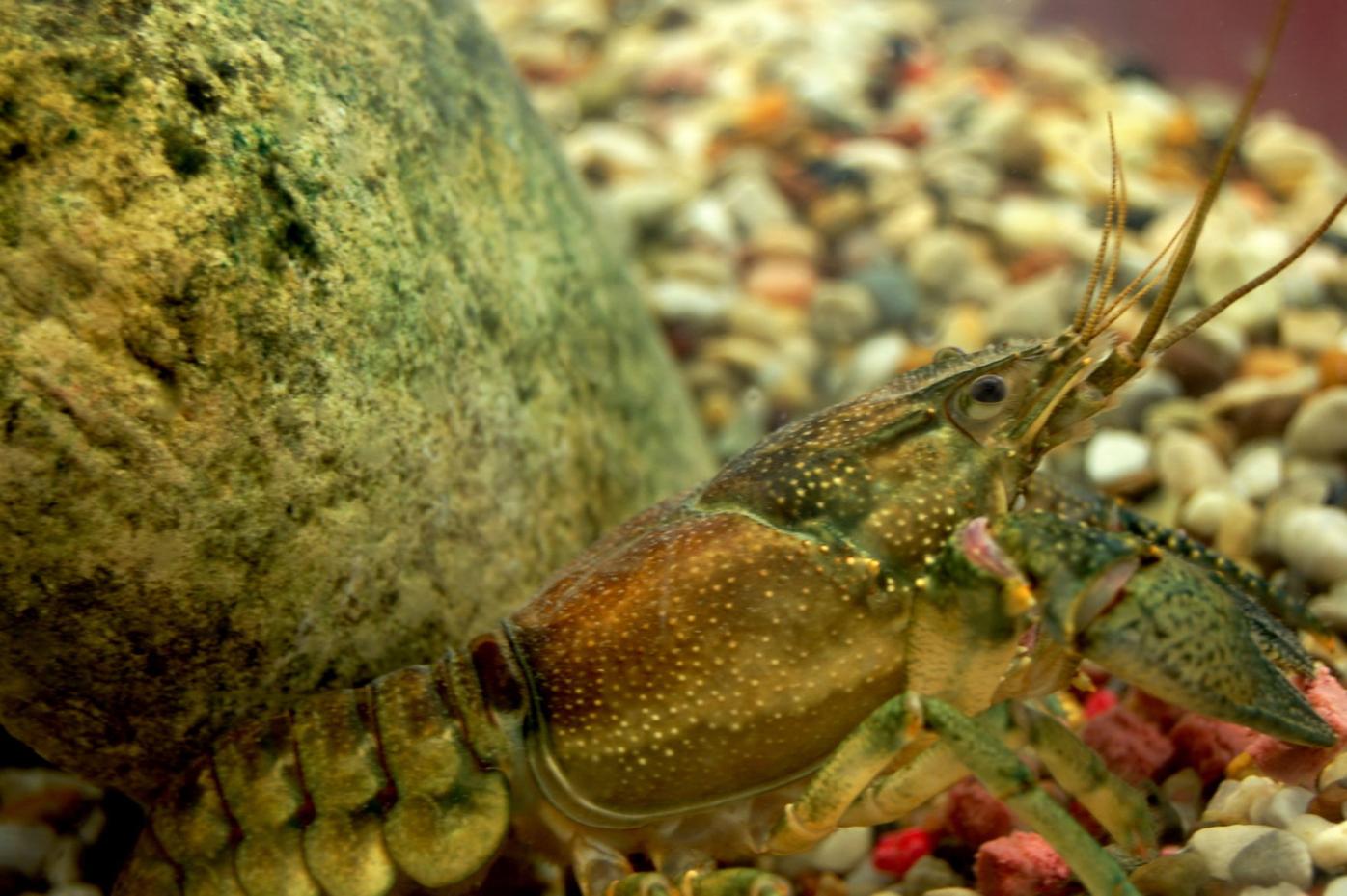 Researcher George Merovich holds a captured specimen of the nonnative rusty crayfish near the Juniata River in central Pennsylvania.

Crawdad, crawfish, crayfish. No matter what you call the crustaceans, the rusty crayfish, an interloper from the Ohio River watershed, has become one of the most destructive invasive species in the streams and rivers of Chesapeake Bay states.

It has been introduced mainly by anglers who use the rusty crayfish for bait and then dump extras into streams. But the rusty crayfish — Faxonius rusticus, recently reclassified from the Orconectes genus — has also reached the Bay watershed by way of aquarium lovers, aquaculture and even school classrooms.

The presence of these large, abnormally aggressive crayfish with large pincers and an indiscriminating appetite continues to expand, crowding out native crayfish and destroying underwater vegetation.

Fish species have declined in many spots in Midwest states, where the invasion began about 20 years earlier, as the crayfish consume fish eggs and destroy habitat. F. rusticus is only native to parts of Ohio, Kentucky and Indiana in the Ohio River drainage.

Frustrating fishery managers, there is apparently no way to beat back the hordes. The use of chemicals would destroy any remaining native crayfish.

“Across the board, the idea is once they’re in, you’ve lost the battle. The focus is on preventing them from getting there,” said Jay Kilian, a biologist with the Maryland Department of Natural Resources.

So fishery agencies have been forced to adopt a stop-the-spread fight. That translates into educating the public about the problem with the aim of preventing new waterways from becoming infested. In addition, most states have banned the sale and possession of rusty crayfish.

The threat is not overblown. In Maryland, which has nine native species of crayfish, F. rusticus is now the second-most prevalent crayfish, second only to yet another invader, the northern or virile crayfish (F. virilis). In the mainstem of the Susquehanna, Pennsylvania’s largest river, the rusty has completely booted out native crayfish that provide food for a variety of land and underwater predators, as well as creating tunnels that are needed by insects for habitat.

Virginia has only seen one infestation so far — in a creek in southwest Virginia — but Brian Watson, an aquatic resources biologist with the Virginia Department of Wildlife Resources, fears that’s just the first foothold. “I kind of think it’s just a matter of time before we find it somewhere else,” he said.

“It’s scary and impressive at the same time,” said David Lieb, an invertebrate zoologist with the Pennsylvania Fish and Boat Commission. “They get in these novel environments, and they go crazy. There are spots where you’re absolutely just stepping on them.” Indeed, rusty crayfish can exceed 18 individuals per square foot of streambed, compared with one per square foot for native species.

Added Kilian, “They are so good at overtaking native crayfish because they can just swamp a system. If you go into a stream and as you are walking you see crayfish move, you’re walking in a stream that has been invaded by rusty crayfish.”

The rusty is certainly built for takeover. About twice the size of many native crayfish, it grows to about 4 inches. Its pincers are large relative to its body size, giving rise to the nickname “little bronze lobster.” Those menacing claws allow them to kick out small crayfish from hiding places and outcompete them for food, which they eat at about twice the volume of native crayfish. Also, once fully grown, the larger, feistier crayfish can ward off bass and other finfish predators, thus removing a key link in the food chain.

Like other crayfish, the rusty will eat nearly any plant or small animal, dead or alive. By eating algae, underwater vegetation, aquatic insects and fish eggs, crayfish are important movers of energy up the food chain, as they are eaten by predators on both land and under water.

But with a higher metabolism, rusty crayfish eat much more than native crayfish. In the case of aquatic vegetation, they pull up vast amounts by the roots, killing the plant. Entire sections of streams can become devoid of aquatic plants, reducing erosion control and robbing smaller game fish of needed shelter and food, and inviting invasive plants to take over.

“We have this pretty large crayfish, and my question is how much energy are they taking that can’t grow other critters?” said George Merovich, an aquatic ecologist and associate professor at Juniata College in Pennsylvania, who has been studying the impacts of rusty crayfish in the upper Juniata River, a major tributary of the Susquehanna.

“You cannot lock up that much biomass and energy in one species. Others are affected, certainly,” Kilian agreed.

Worse, rusty crayfish are breeding with some native crayfish, creating hybrids that might have the worst traits of the aggressive invader, or might be sterile and therefore a genetic dead end for the native species.

Studies are just under way to see if rusty crayfish are harming smallmouth bass populations, which have suffered serious declines in many rivers in the Bay states. Merovich has not finished his research but suspects the consumption of insects by rusty crayfish is not affecting smallmouth diets. But crayfish mowing down vegetation could be removing shelter needed by juvenile bass to survive.

In the Midwest, rusty crayfish have been blamed for sharp declines of bass, northern pike and bluegill gamefish. The problems even extend to recreation, where they have overrun some lakes in Wisconsin and Minnesota so badly that they scare off swimmers.

There has been some talk about plucking rusties from infested waterways and encouraging the public to develop a taste for them, holding “crawfish boils” that are so popular in the South. But restrictions would have to be changed and markets developed. Quips Kilian, “When you eat crustaceans in Maryland, it’s not crawdads.”

Despite the ominous spread of rusty crayfish, there is some hope among wildlife managers. A majority of the waterways in each state are still free of the invaders. With increased bans and public awareness of the dangers of nonnative crayfish, there is an expectation that further introductions by humans are less likely than they were a decade ago.

“There is hope. We just need to not move rusty crayfish around,” Lieb said.

And Kilian has one simple suggestion, aimed at anglers: “Don’t dump your bait.”

Ad Crable is a Bay Journal staff writer based in Pennsylvania. Contact him at 717-341-7270 or acrable@bayjournal.com. This article was originally published in the Bay Journal and was distributed by the Bay Journal News Service.