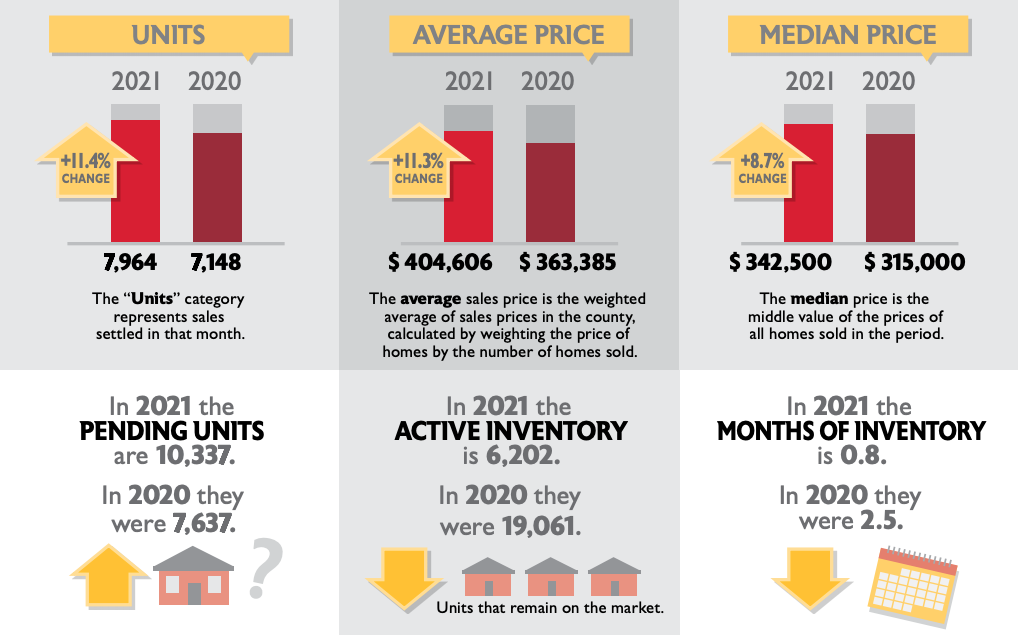 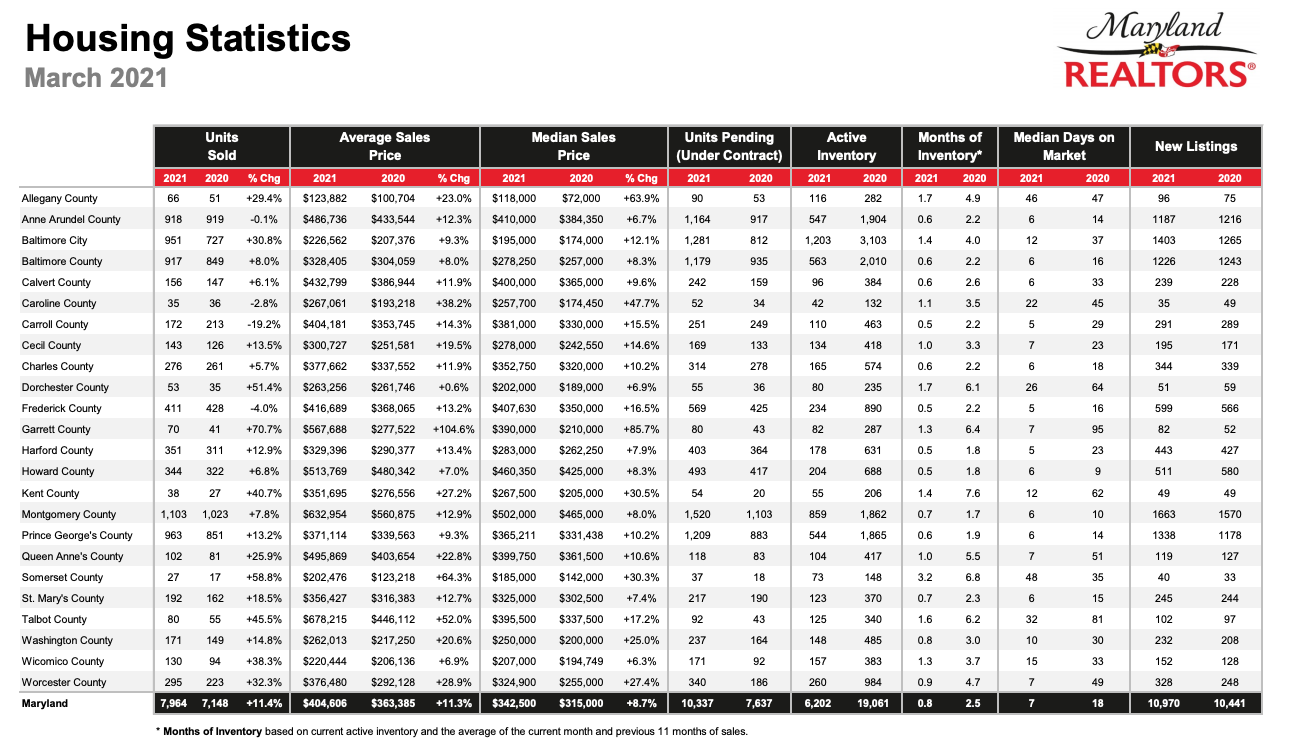 “Home sales are continuing at a formidable pace. Even pending units—houses under contract—are up substantially, at 10,337, an increase of 35.4% from last year,” said Dee Dee Miller, 2021 President, Maryland REALTORS, “but yes, the concern remains with available inventory. With fewer homes available to sell, it’s driving the price up, which is good for sellers, but it could drive some potential buyers out of the market. The number of new listings showed a small increase, from 10,441 in March 2020 to 10,970 in 2021 but this is not likely to have a significant impact on other factors driving this market.”

In a recent post on LinkedIn, Dr. Lawrence Yun, Chief Economist for the National Association of REALTORS, said, “Today’s market is so hot and so rare that over a half of homes are being sold above the listed price in some states. After this current real estate cycle, I do not ever expect to see another frenzy [of] multiple offers in my lifetime.” From NAR data, 42% of the existing homes sold in Maryland were sold above the list price.

Nationally, existing-home sales fell in March, marking two consecutive months of declines, according to the National Association of Realtors. The month of March saw record-high home prices and gains. While each of the four major U.S. regions experienced month-over-month drops, all four areas welcomed year-over-year gains in home sales.

Total existing-home sales — completed transactions that include single-family homes, townhomes, condominiums and co-ops — decreased 3.7% from February to a seasonally-adjusted annual rate of 6.01 million in March. Sales overall climbed year-over-year, up 12.3% from a year ago (5.35 million in March 2020).

“Consumers are facing much higher home prices, rising mortgage rates, and falling affordability, however, buyers are still actively in the market,” Yun said.

“The sales for March would have been measurably higher, had there been more inventory,” he added. “Days-on-market are swift, multiple offers are prevalent, and buyer confidence is rising.”

Yun said although mortgage rates have risen a tick, they are still at a favorable level and the economic outlook is promising.

“At least half of the adult population has received a COVID-19 vaccination, according to reports, and recent housing starts and job creation data show encouraging dynamics of more supply and strong demand in the housing sector.”

Total housing inventory at the end of March amounted to 1.07 million units, up 3.9% from February’s inventory and down 28.2% from one year ago (1.49 million). Unsold inventory sits at a 2.1-month supply at the current sales pace, marginally up from February’s 2.0-month supply and down from the 3.3-month supply recorded in March 2020. Inventory numbers continue to represent near-historic lows; NAR first began tracking the single-family home supply in 1982.

“Without an increase in supply, the society wealth division will widen with homeowners enjoying sizable equity gains while renters will struggle to become homeowners,” Yun said.

Distressed sales – foreclosures and short sales – represented less than 1% of sales in March, equal to February’s percentage but down from 3% in March 2020.

Existing condominium and co-op sales were recorded at a seasonally-adjusted annual rate of 710,000 units in March, up 1.4% from February and up 29.1% from one year ago. The median existing condo price was $289,000 in March, an increase of 9.6% from a year ago.

“NAR has made it a priority to be at the forefront of the anticipated economic revival,” said NAR President Charlie Oppler, a Realtor from Franklin Lakes, New Jersey, and the CEO of Prominent Properties Sotheby’s International Realty. “We will continue pushing for an increase in housing construction and inventory, with the goal of helping qualified buyers and countless families achieve the American Dream of homeownership.”

In comparison to one year ago, median home prices rose in each of the four major regions.

The National Association of Realtors® is America’s largest trade association, representing more than 1.4 million members involved in all aspects of the residential and commercial real estate industries.