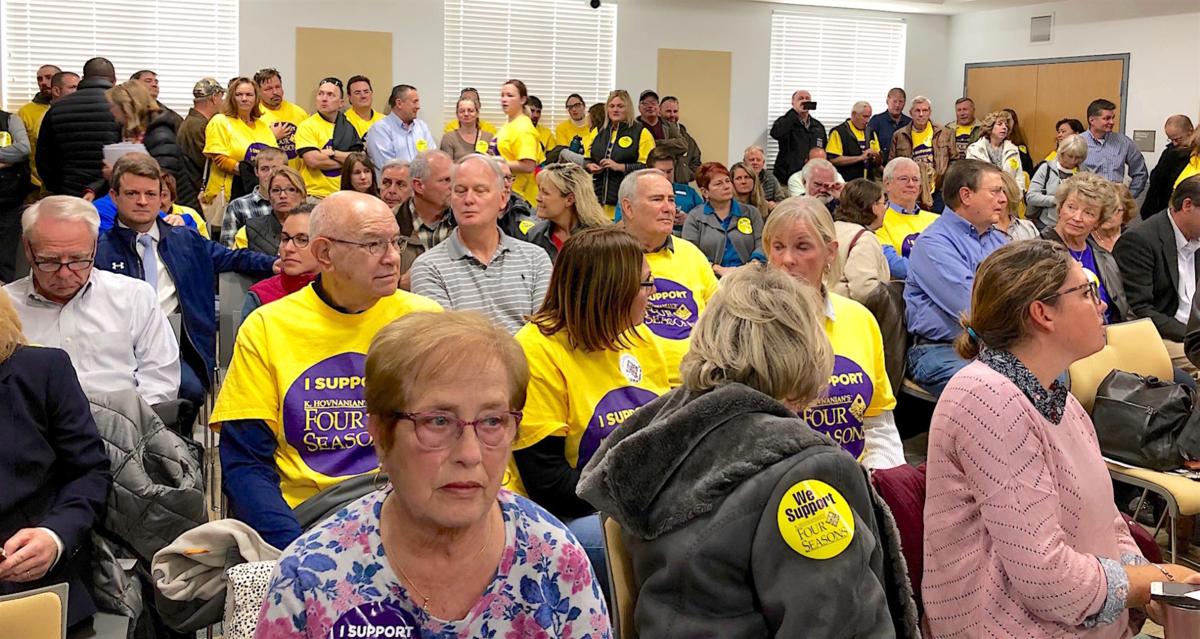 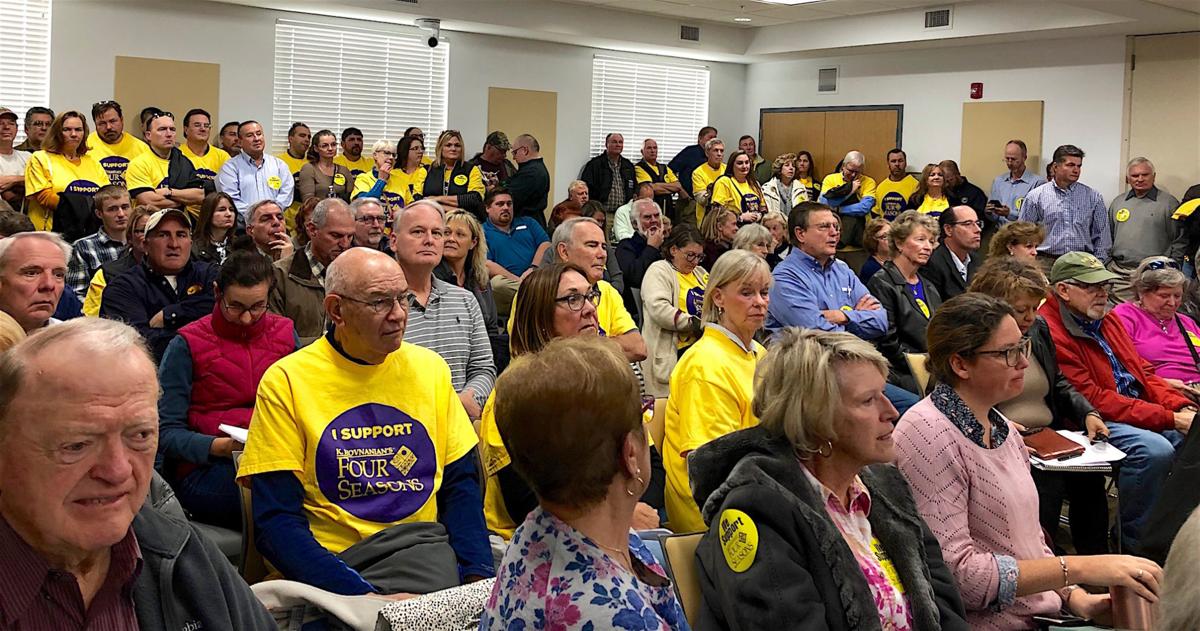 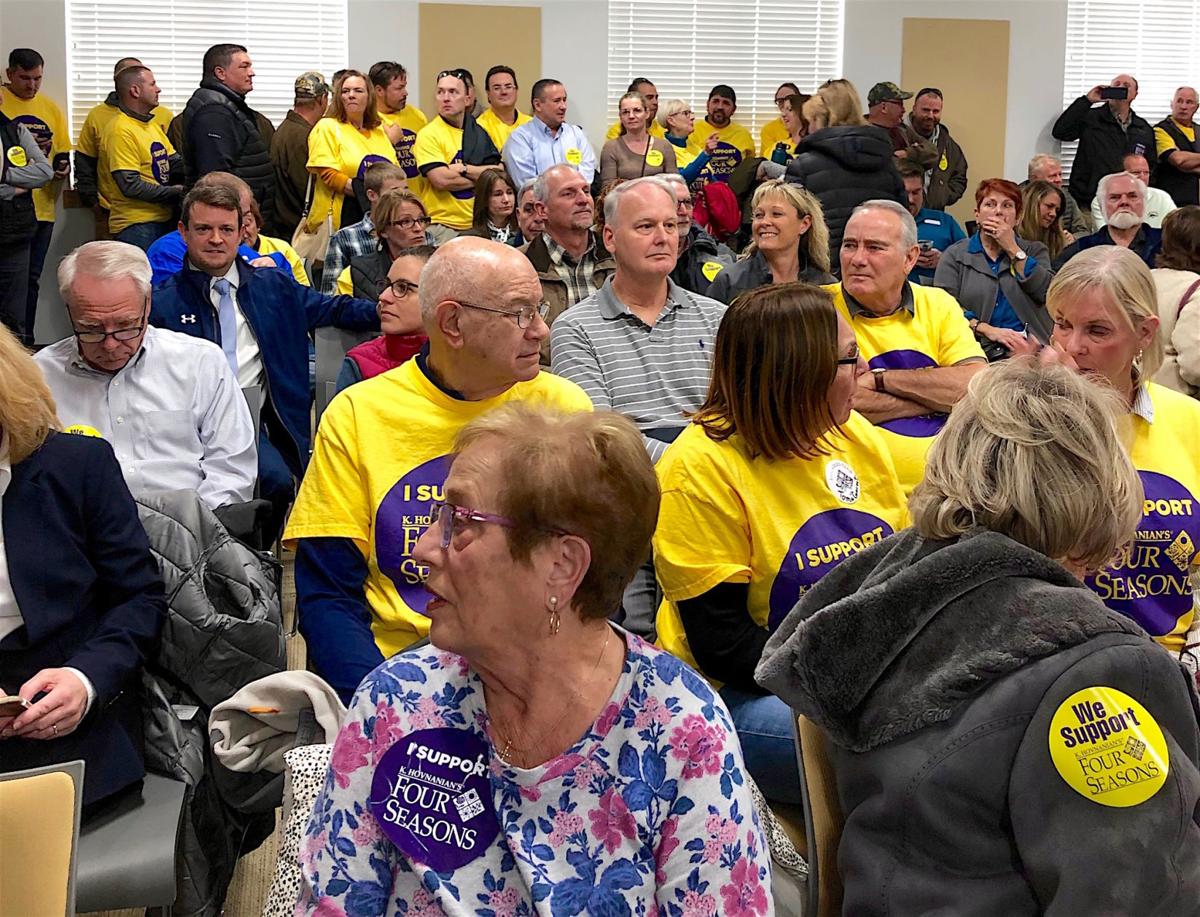 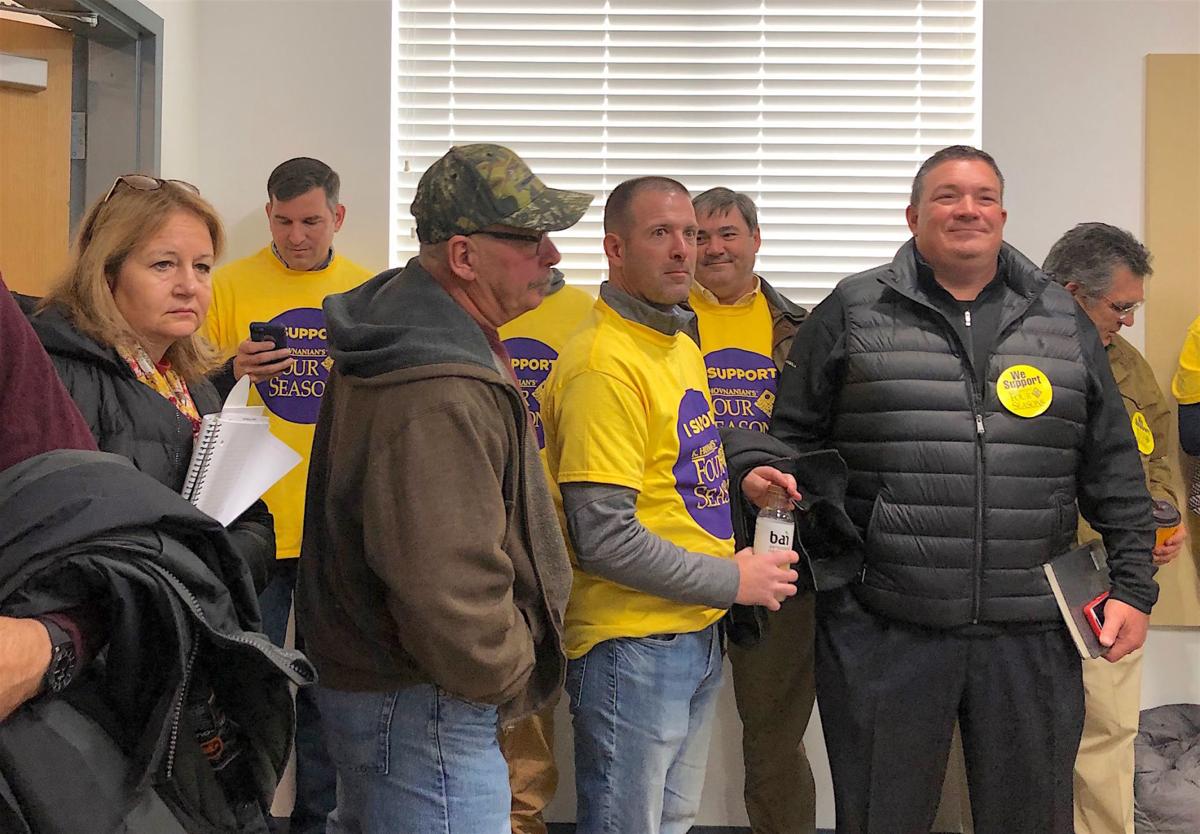 More than 120 people packed the meeting room at the beginning of the Four Seasons presentation, many wearing T-shirts and stickers that read, “I Support K. Hovnanian’s Four Seasons.”

Steve Cohoon, the county’s public facilities planner, gave a brief overview of the development, which was first proposed more than 20 years ago. Phase I of the Fours Seasons project was approved in December 2005 and is currently under construction. It includes 106 single-family lots and 56 condominiums in four buildings between Castle Marina Road and Macum Creek in Chester. The Phase II subdivision approval is for 179 single-family lots, 70 condominiums in five buildings and a 26,566-square-foot clubhouse with accessory structures and recreational amenities. He said the plan came before the commission having met all federal, state and county legal requirements.

Four Seasons attorney Joe Stevens introduced a series of experts working on the project to discuss such things as open space, shore buffers, forest buffers, engineering, stormwater management, traffic and landscape design. Both Cohoon and Stevens mentioned the overall project has been reduced by 271 units with the elimination of a previously planned Phase V.

Tim Glass with Lane Engineering said the stormwater management plan removes phosphorous over and above what is required.

Leigh questioned whether developers had taken sea-level rise and storm-surge scenarios into account with their designs. Stormwater management plans are based on rainfall.

He said the weekend traffic count was misleading, because when traffic is moving at a crawl only a reduced number of cars can pass through an intersection in a given amount of time.

Planning Commissioner Sheila Tolliver said she questioned their projected reduction in travel by people over 55.

Tolliver noted the consultant dismissed beach traffic as something they couldn’t control, but that’s two to four days residents may not be able to move around, she said.

Landscape architect Lisa Biddle showed designs for the entrance to Phase II, the streets, the clubhouse and the buffer between Four Seasons and the Bayside community next door.

He asked the residents in the room to raise their hands; many of them were wearing the support T-shirts and stickers.

Irons said Four Seasons is a first-class, active lifestyle community, noting they already host yoga classes and have a walking club. He showed pictures from the community chili cook-off and recent fall festival.

He said Four Seasons at Kent Island is “going to be the premier waterfront destination in the mid-Atlantic.”

Irons detailed the benefits to the county outlined in the Developer’s Rights and Responsibilities Agreement, highlighting ones that have already been completed, including the larger roundabout at Castle Marina Road and state Route 18, improved roads, a water tower, a pump station and a paved walking trail to the Bayside community.

Tolliver asked if the clubhouse parking area was ADA compliant, saying she didn’t see many spots marked as handicapped accessible.

While no one had the exact number of spaces at their fingertips, they said the plans met the requirements.

This is the last year of Baby Boomers turning 55; that age cohort is beginning to decline, Tolliver said. What kind of protection is built in to ensure that this will remain a 55-and-over community, she asked.

Planning commission attorney Chris Drummond said restrictions were put in the covenants, and the entire community would have to vote; also, the growth allocation was granted on the condition of it being an over-55 community.

The commission broke for lunch, postponing public comment until after.

When the planning commission meeting resumed, many members of the audience had left. Planning Commission Chairman Jeffrey Reiss said 40 people had signed up to speak, but only 22 did. Of those, two spoke against the project.

Joshua Willis of Stevensville commented on the historical significance of Kent Island. He said he didn’t believe the studies on water quality and that traffic is already bad.

Jay Falstad, executive director of Queen Anne’s Conservation Association, reiterated his organization’s opposition to the project as a whole. He said the renderings are impressive, but the sea-level-rise report is missing.

“In about 20 years there will be 2 feet of water lapping up on this property,” he said, and most of the outfalls for the development will be underwater.

He called the Four Seasons proposal “a very poor and costly, long-term investment for anybody that’s bought a house there, costly to Queen Anne’s County and an environmental mess for the Chester River.”

He submitted a document from QACA’s lawyer.

Falstad also brought up previous environmental violations — specifically at the Kent Island site in February 2017 and generally at other K. Hovnanian developments around the country.

Falstad said QACA had tried to talk with Four Seasons years ago and remains willing to sit down and talk, but his organization still has major concerns about the project.

Many of those who spoke in support either work for, live in or want to purchase homes in Four Seasons at Kent Island. They talked about increasing the county’s tax base, adding jobs closer to home and supporting local businesses.

Roy Smoot said he and his wife moved to Four Seasons from St. Michaels and couldn’t be happier. They were one of the first five homeowners, he said.

“I love it here,” said Carol Conrad, who moved to Four Seasons with her husband at age 70. A retired teacher and a Master Gardener, she mentioned the lifestyle, the nature, the sunsets and the biodiversity as attractions.

“This place and these people make me sing with joy — we have joined the church choir,” she said.

Former County Commissioner John McQueeney, who signed the original DRRA with Four Seasons, reiterated his support of the project. He said the developer had lived up to their agreement and more.

Mac McIntosh of Tower Gardens said Four Seasons is good for business and he sees a lot of positives. “It’s been tested every step of the way, and I believe it’s measured up well,” he said.

Tammy Holden of Cloverfields said it was ridiculous to prolong the process when people are waiting to move there. Traffic is always a mess, she said, let this project move on.

The comment that drew the most reaction from the crowd came from a youth from Queenstown. Jonathan Irons said he is a fisherman and avid bird watcher and had done his research on water quality in the Chesapeake Bay.

The land where Four Seasons is going was farmland, in production right up to the water’s edge, polluting the Bay, he said, adding the buffers proposed by Four Seasons would prevent runoff and help improve water quality.

“Hats off to Four Seasons for creating a valuable habitat in a growth area and helping preserve the Chesapeake Bay,” he concluded to applause.

When it came time to vote, Leigh made a motion, seconded by Tolliver, to table the Four Seasons project pending sea-level-rise documentation and modeling.

“You’re asking for a study about an unknown about which there are public debates,” Drummond said. He asked if it were a project matter or a public approval matter.

Planning Commissioner Robert Priest said he didn’t know it was morally right to hold the project up based on a study on an unknown.

Planning and Zoning Director Mike Wisnosky asked the planners to look at the situation from the developer’s perspective. You’re telling them, you meet all the requirements, but now we want you to do this — that’s not fair, he said.

“There has to be rules and regulations for the developer to rely on,” Wisnosky added.

Tolliver said they were dealing with an environmentally sensitive area, and it was better to make accommodations now instead of 10 years from now.

Cohoon said: “If it’s a public policy question, it’s a planning document. That would be the time to evaluate it.”

Priest repeated he didn’t see how they could inject the requirement into the project.

Stevens offered to have project engineers work with the Department of Public Works to address Leigh’s concerns.

Leigh’s motion to table the project failed, 2-3, with only Leigh and Tolliver supporting.

Priest made a motion to approve the project, with the conditions outlined by planning staff. At Drummond’s prompting, he added a condition that Four Seasons would do a study on sea-level rise and storm surge before the next phases of the project come before the planning commission, as offered by Stevens. The motion was seconded.

Leigh proposed another amendment to require the developer to use native plants extensively, if not exclusively, which Tolliver also seconded. After a discussion which included comments that the designer had already addressed that concern, that amendment also failed 2-3.

Thanks for signing up!