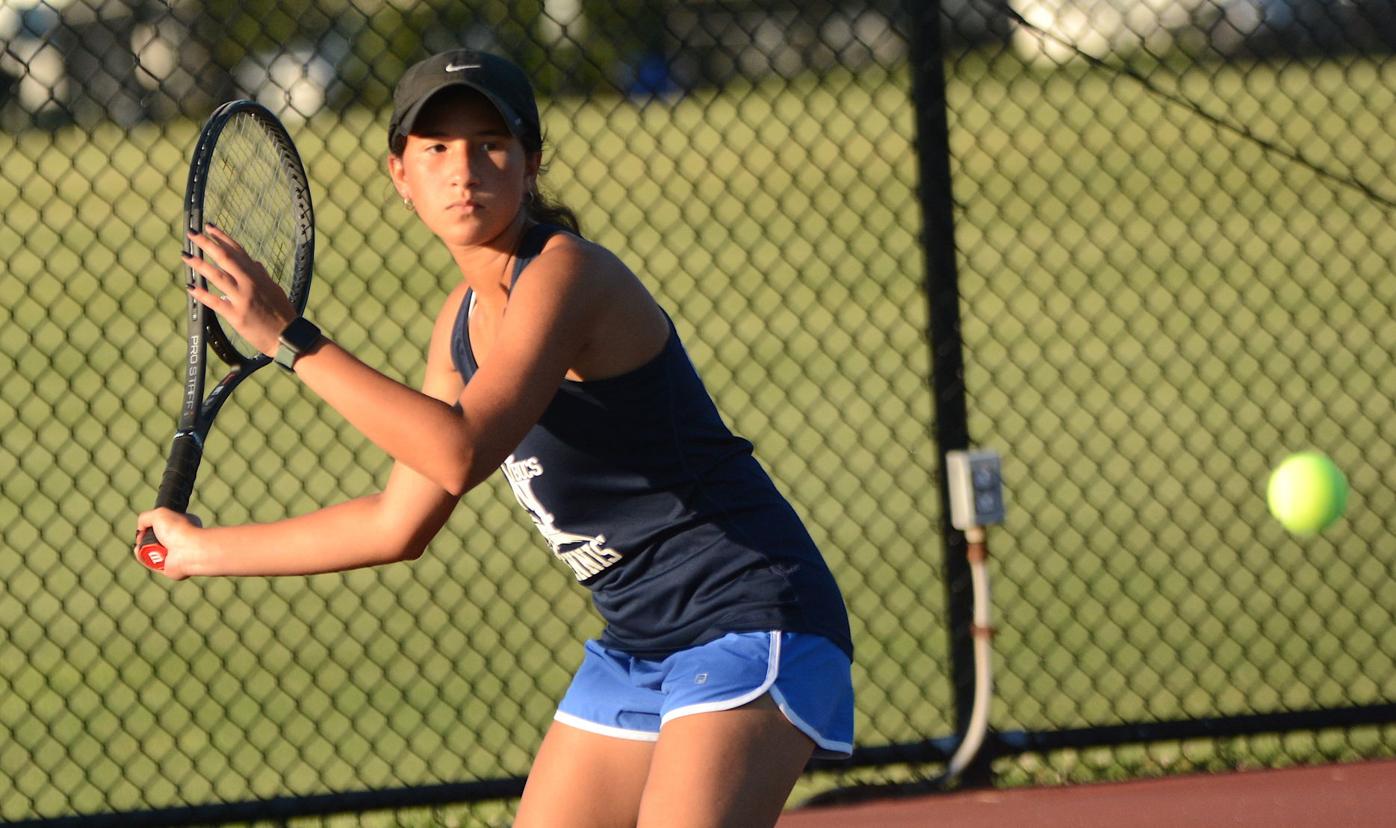 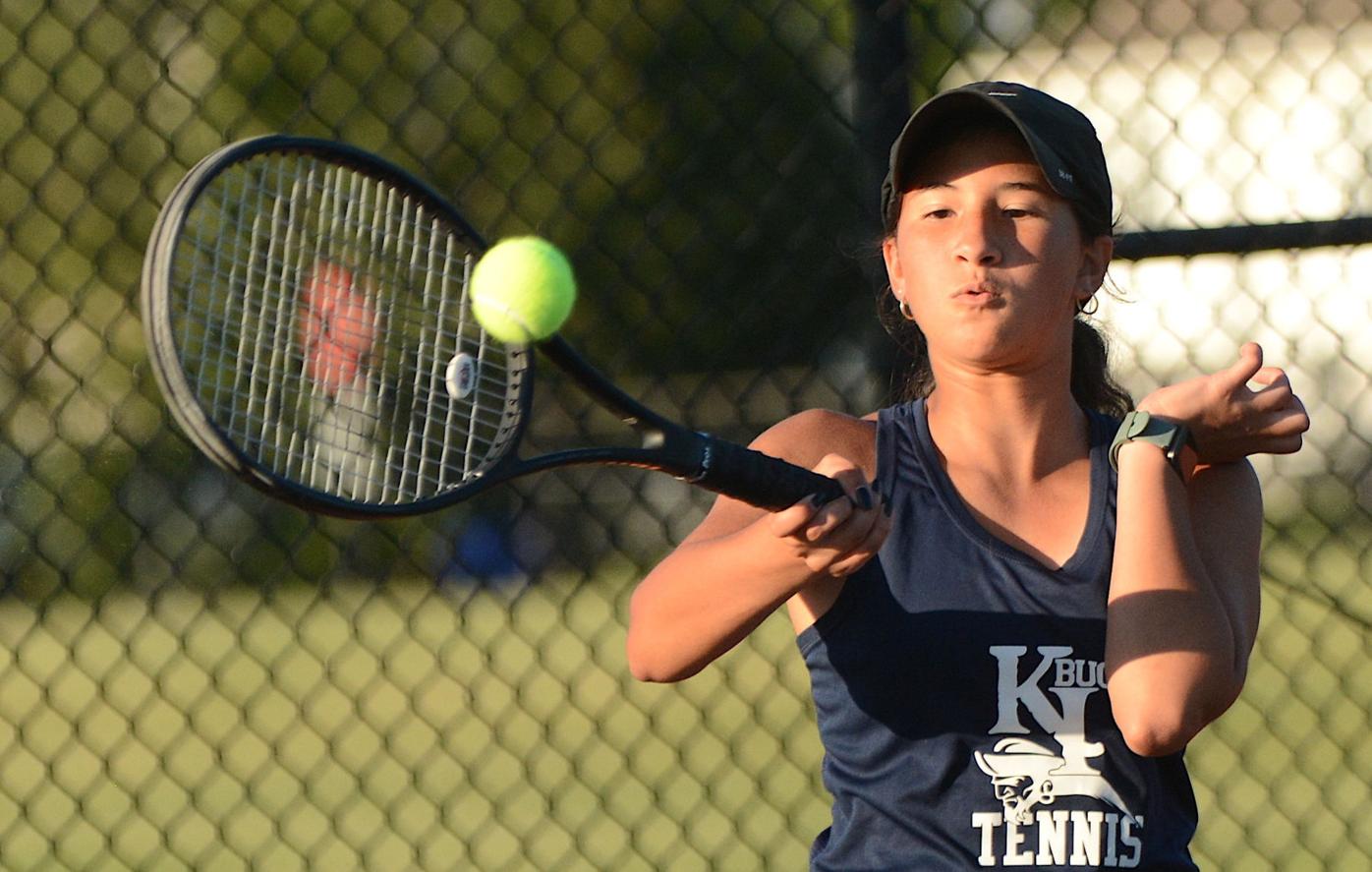 As she returned to the Wilde Lake Tennis Center in Columbia for the second time in as many days, the Kent Island High sophomore’s mind was focused on Poolesville’s Angelina Zhao, her opponent that morning in the Class 2A state girls’ singles final.

“I saw her playing next to me the day before, and she was really good,” Castro said of Zhao, who like her opponent had advanced to the championship with a semifinal victory on Friday, June 18.

Kent Island girls’ head coach Rick Tyng was about 10 minutes away from the tennis center Saturday morning when he received a phone call from North Caroline head coach Dennis White, the District 8 director and state committee member, who said Zhao would not be playing.

“The girl (Zhao) that won called the tournament director (Saturday) morning early and without giving a reason said, ‘I won’t be there,’” Tyng said. “So we don’t know if it was a family emergency. We don’t know if she got sick or injured, or what the case was.

“I called Ana’s Dad, and they were just walking in (to the tennis center) at that point,” Tyng continued. “It was a big disappointment. On one side you’re happy, you’re a state champion. But there’s always going to be a part of you that says, ‘Boy, I would have liked to compete and won it.’”

While the default victory was disappointing, Tyng brightened Castro’s mood soon afterward when he informed her she had become the first player in school history to win a state tennis championship of any kind.

Castro got an even bigger surprise four days later, when she learned she had become the first player from a Bayside school to win the girls’ state singles championship since James M. Bennett’s Charlotte Haberstroh won her second crown in 1983.

“That’s so crazy to even think about,” Castro said of ending the conference’s longest state title drought in tennis at 38 years. “It was just great to have a year where we could actually play tennis and represent my school and the whole Bayside. That’s really crazy to me.”

Prior to the Maryland Public Secondary Schools Athletic Association’s decision that each of the state’s four classifications would have their own championships beginning in 2019, that state’s four classes were lumped into one when it came to the state tennis tournament — the only sport with that format.

The conference’s title droughts in the other three divisions remained though, with mixed doubles at 22 years (Cambridge-SD’s Brooke Fleetwood and Shan Shariff in 1999), and girls’ doubles at 30 (Cambridge-SD’s Heidi McWilliams and Abby Messick in 1991).

But the state title that had eluded Bayside players the longest was in girls’ singles. Kent Island had the last three hopefuls under the state’s previous format, with regional/district champions Kristi Wong (2012-2014), Catrina Coyner (2015-18) and Celina Kaufman (2019), but those three could snap the streak.

Though just a freshman, many thought Castro was a natural to extend the Bucs’ dominance. She started play when she was 5, took lessons from Tyng at an early age, and competed in junior tournaments. And she didn’t have to look far for stiff competition, with her father, who played collegiately at the University of Puerto Rico, and her younger sister, Carolina, who is nationally ranked.

“Ana is petite, but she wails on the ball,” Tyng continued. “She hardly ever makes errors, and she’s savvy enough to be able to redirect the ball and always put her opponents on the run. She’s a little reluctant to work her way into the net, and we’ve been kind of working with her this season to eliminate that reluctancy. And Catrina and Kristi were the same way; they prefer to play on the baseline. And that’s kind of how girls are at that age. It’s rare to find one that’s real comfortable at the net. So Ana’s getting better and better at it.”

COVID-19 canceled all sports in the spring of 2020. The 2021 season would be short and initially culminate with a conference championship. The Bayside plans were scrubbed though when the MPSSAA approved a plan to bring the state tournament back this spring.

“I’ve been playing for so long so I know how to handle competition,” Castro said of her success. “Because when it comes down to it, it’s really not talent at the end because there’s so many great athletes. It really comes down to how you compete and I’ve been competing for so long. I know when I need to get the ball in. And I know what kind of ball I need to hit in certain places.

“I know how to keep my calm,” Castro continued. “It comes from (junior) tournament play. And I think that’s helped a lot, because there’s sometimes when I’ve been down and I started getting really nervous and I’m like, ‘AHHH!’ It comes from freaking out and losing because of it. And then just realizing you have to let it go and calm down. You definitely have to get to worse before it gets better.”

Castro improved to 10-0 with another 6-0, 6-0 victory over North Harford’s Betania Hoyos in the Class 2A East Region final at Harford Community College. She then defeated La Plata’s Isabella Hunt in straight sets in the state semifinals, earning her a spot in Saturday’s scheduled championship match.

“It’s just a shame that they weren’t able to play that final,” said Tyng, who along with Castro watched Zhao earn a 7-6 (4), 6-2 victory over Hereford’s Zoe Hsieh in Friday’s other semifinal. “It was going on right next door to her when she was playing her semifinal, and the girls were good. I knew whoever came out of that was going to give Ana a real tough match.”

As far as pressure, Castro said in some ways it’s been constant companion.

“There’s always the pressure of, ‘Well, I have to win,’” Castro said. “And then this year everyone was expecting me to win states. There’s always been a lot of pressure definitely because people are just expecting things from when you have played for so long. And that makes sense.”

But that pressure dissipated midway through the high school season

“I wasn’t really worried,” Castro said. “I was not expecting to win a state title. I didn’t know what the level (of competition) was going to be at states because it was so big. I just figured (there were) so many other players like me and better than me. So I was just hoping to get pretty far. And I did.”

So did teammates Brooke Barba and Claire Schultz, the surprise tandem who despite never playing together prior to sectionals reached the state finals in girls’ doubles.

“It was such a pleasant surprise,” Tyng said of Barba, who played No. 3 singles during the season, and Schultz, who didn’t get many opportunities to play singles and was around sixth on ladder. “But the people in between were seniors that opted out and so it was kind of a logical choice based of where everyone stood on the ladder. And once we put them together they seemed to jell nicely and the results certainly spoke to that.”

“They’re both very coachable kids, and they listen and they pick up to the instruction,” Tyng said. “They won their first couple of matches at (sectionals) and then they had to play Dennis’ kid, Rebecca, and the No. 2 from North Caroline. And I’m thinking, there’s no way they’re going to pull this one out. But low and behold they actually pulled it out, and then I became a believer in these kids. So we kept on working.”

And they kept on winning.

Barba and Schultz dropped the opening set for a third straight match in the state finals, but could not put together a comeback against Hereford’s Emma Hsieh and Carly Ross, who who 6-3. 7-5.

“They were so darn close in the finals,” Tyng said. “But they had a lot of opportunities to win that second set and I’m thinking to myself, ‘You guys are so mentally tough. If I can just get them into that third-set tiebreaker, the other kids might get nervous. And Claire and Brooke, when they get nervous it’s usually in the beginning of a match, when they kind of work their nerves out. And so I thought I’d be golden if I could have gotten them to that third-set tiebreaker. But for them to make it to finals and to be competitive with the girls that won was just so gratifying for those kids. They were just so happy with their performance. Of course, they wanted to win, but they should be holding their heads up high and be very proud of their accomplishments.”

Notes: Kent Island’s John Wagner and Charles Ritz lost to Hereford’s Grayson Hammann and Kevin Ross, 6-0, 6-0 in the 2A boys’ doubles semifinals. ... Easton’s Allison Cherwien and Andrew Ottey lost to Century’s Danielle DeLawter and Evan DeLawter, 6-4, 6-0 in the semifinals of the 2A mixed doubles tournament. ... Cambridge-SD’s Jasper Hood lost to Allegany’s Jonathan Nelson, 7-5, 6-3, in the 1A boys’ singles semifinals. ...