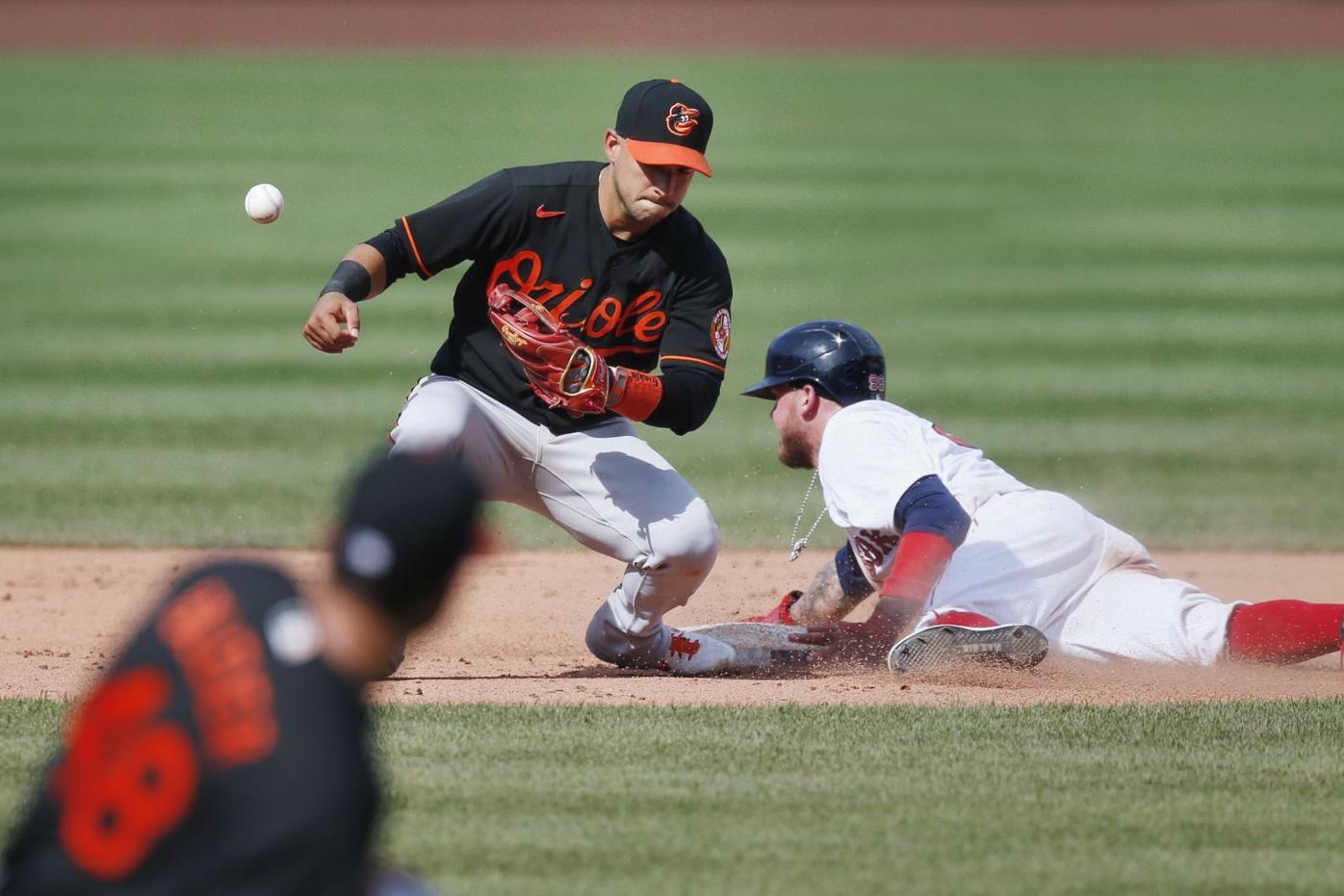 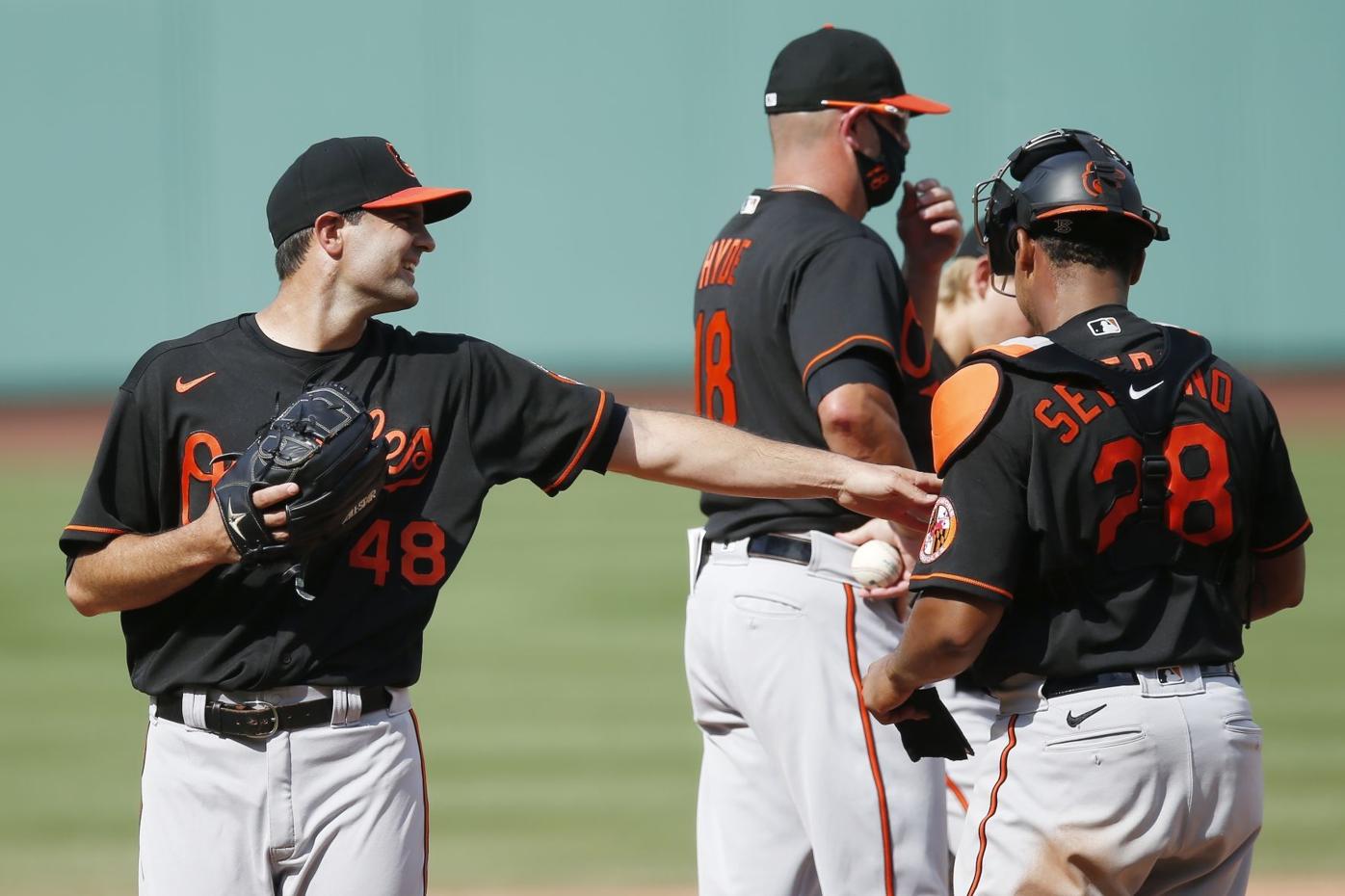 Baltimore pitcher Richard Bleier, left, walks off the mound and reaches out to Pedro Severino (28) after being relieved by manager Brandon Hyde (18) during Saturday's eighth inning.

Baltimore pitcher Richard Bleier, left, walks off the mound and reaches out to Pedro Severino (28) after being relieved by manager Brandon Hyde (18) during Saturday's eighth inning.

BOSTON (AP) — Orioles pitcher Alex Cobb has been waiting a long time to tell his teammates “thank you” following a victory.

That wait ended with his first regular-season win in almost two years.

Cobb mostly kept the Red Sox off balance on Saturday allowing just four hits and one run while striking out six in Baltimore’s 7-2 win. It was a big change from the day before, when the Orioles watched the Red Sox tally 17 hits in a 13-2 win on opening day.

After missing most of last season with a hip injury that required surgery, Cobb said making his first start since April 2019 was a small step in a journey to get back to where he wants to be.

“You have to start somewhere,” said Cobb, who went 5⅓ innings to pick up his first victory since Sept. 4, 2018 against Seattle. “There’s been a lot of work put in, post-surgery, rehab. It’s real nice to be able to see results.”

Anthony Santander and Renato Núñez each drove in two runs for Baltimore.

“Ï don’t think actually he had his best stuff,” Hyde said. “But as a competitor, knows how to pitch and really did a great job. Stretched him out a little bit, which isn’t a bad thing.”

Cobb took a seat in the sixth after giving up a solo home run to Mitch Moreland.

But he had room for the mistake thanks to the run support from an Orioles lineup that jumped on pitches from Boston starter Martin Pérez early in at-bats to give him a 5-0 cushion. The Red Sox added another run off reliever Paul Fry to pull within a margin of 5-2. Fry was pulled in favor of Miguel Castro, who promptly struck out pinch hitter Xander Bogaerts to end the threat.

Hays and Alberto opened the game with back-to-back hits. Pérez seemed to be working his way out of the jam after striking out Iglesias and getting Santander to line out, but Núñez doubled off the Green Monster, scoring Hays and Alberto.

“Martin didn’t really get those pitches where he wanted to,” Red Sox manager Ron Roenicke said.

A wild pitch advanced Núñez to third and he made it 3-0 when Rafael Devers mishandled Pedro Severino’s soft grounder to third.

The Red Sox were just 1 for 7 with runners in scoring position, stranding 10 runners on base. Their biggest bright spot was Alex Verdugo, who had three hits in his first start since coming over in the trade that sent Mookie Betts and David Price to the Los Angeles Dodgers.

Red Sox: SS Xander Bogaerts and C Christian Vázquez both got a day off Saturday. Roenicke said both are fine, but that it’s part of a plan to get his starters rest for day games that fall immediately after night games. The goal is to avoid early injuries, he said. Tzu-Wei Lin and Kevin Plawecki started in their place.

RHP Dylan Covey was sent down to the alternate training site in Pawtucket after the game. Roenicke said a corresponding move will happen Sunday. Covey pitched two innings Saturday, giving up three hits, two runs and striking out two. Boston also claimed left-hander Stephen Gonsalves off waivers from the New York Mets and optioned him Pawtucket.

Orioles: Left-hander Wade LeBlanc makes his Orioles debut in the series finale Sunday. The 35-year-old previously pitched in Japan and for seven major league teams, including Seattle last season, before signing a minor league deal with Baltimore in January.

Red Sox: Right-hander Ryan Weber made his first opening day roster this season after beginning the last four in Triple-A. In 11 major league starts, he is 1-5 with a 5.96 ERA. He allowed two earned runs over 7⅔ innings in his only two career appearances against Baltimore last season.

No one on the Chicago White Sox seemed to mind.

García homered from both sides of the plate, and Chicago pounded Minnesota.

Keuchel won his White Sox debut while throwing to McCann in a battery comprised of former teammates at the University of Arkansas. But the diminutive García, listed at 5-foot-8 and 185 pounds, stole the show with his second career multi-homer game.

Edwin Encarnación hit a two-run drive as the White Sox bounced back nicely after losing 10-5 to the reigning AL Central champions on Friday night. McCann and Eloy Jiménez also went deep on the second day of the pandemic-delayed 60-game season.

Lowe, a first-time AL All-Star in 2019, hit a drive into the gap in right-center field off reliever Sam Gaviglio (0-1). The right-hander later balked, allowing Lowe to score the third run of the inning.

Ji-Man Choi drove in Tampa Bay’s other run with a sixth-inning double off Matt Shoemaker, who made his first start for the Blue Jays since injuring his left knee in April 2019.

Toronto tied it at 1 on Reese McGuire’s homer off right-hander Pete Fairbanks in the seventh.

Nick Anderson (1-0), the third of four Rays pitchers who followed starter Ryan Yarbrough, retired four of five batters he faced to get the win. Oliver Drake worked a perfect ninth for the save.

Toronto’s Cavan Biggio, whose three-run homer was the big blow in the Blue Jays’ 6-4 win on opening day, was 2 for 3 with a walk, extending his on-base streak to 31 consecutive games — the longest active stretch in the majors.