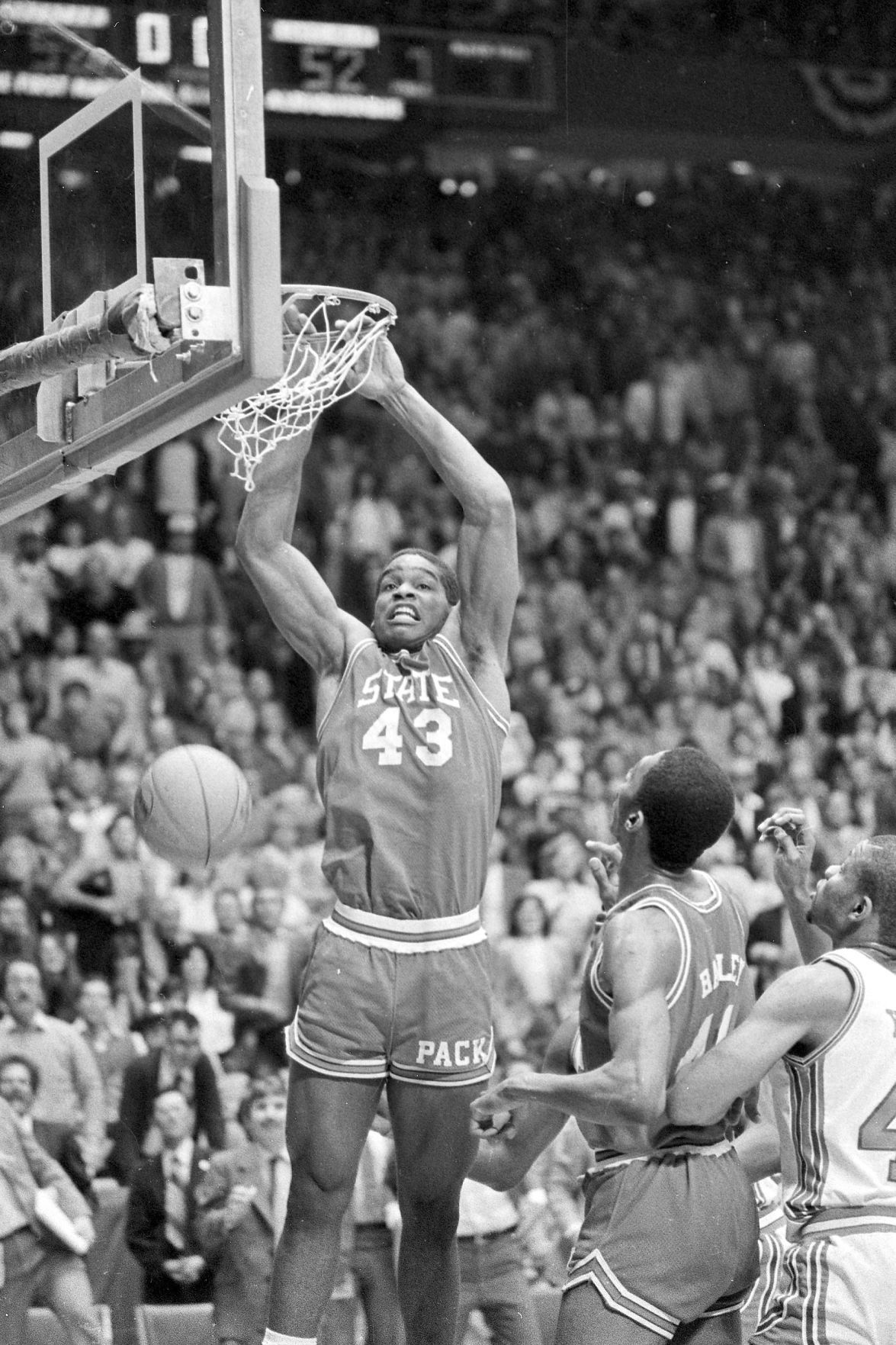 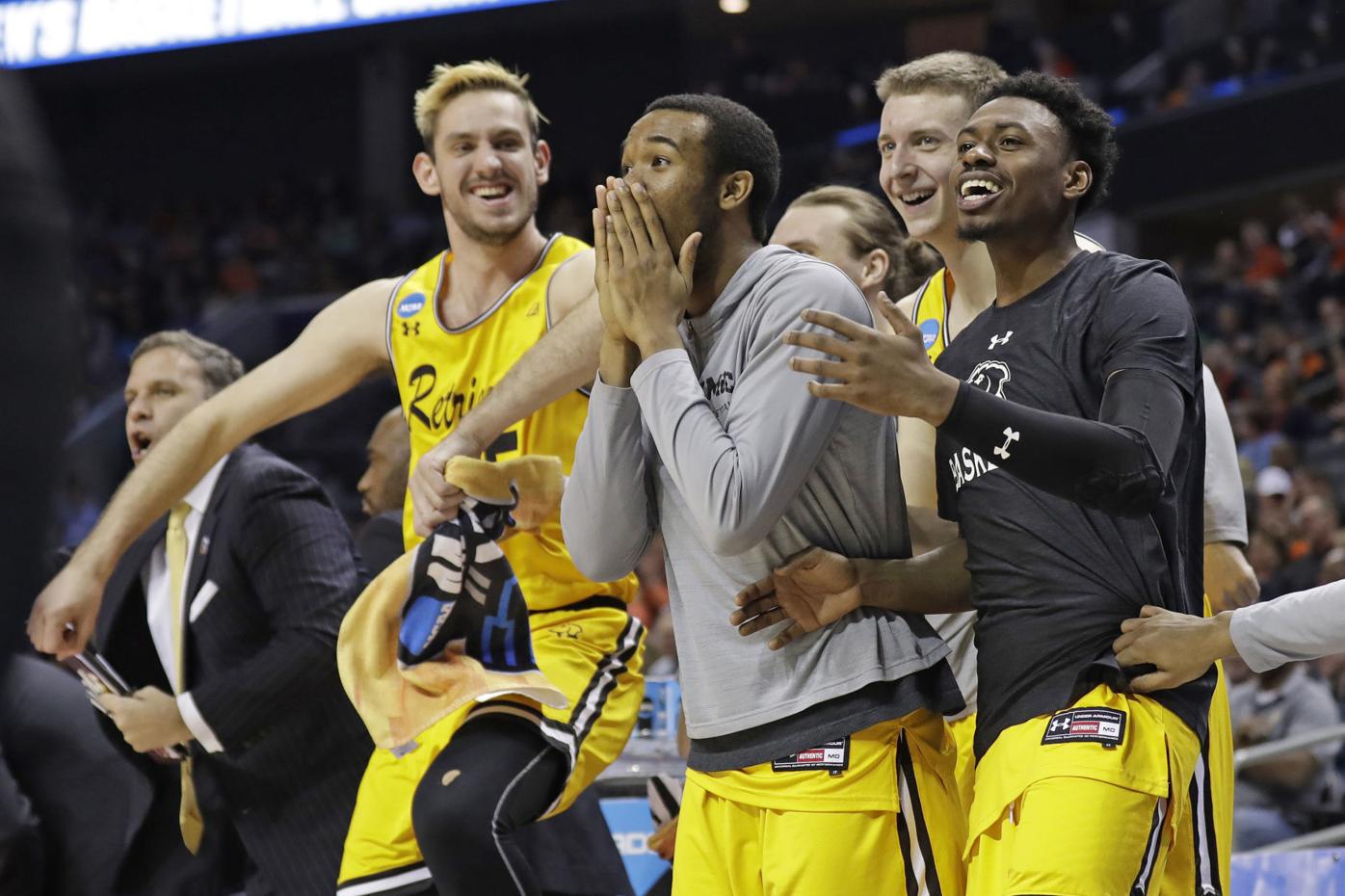 In this March 16, 2018 photo, UMBC players celebrate a teammate’s basket during the second half against Virginia at the NCAA men’s college basketball tournament in Charlotte, N.C. UMBC defeated Virginia 74-54.

In this March 16, 2018 photo, UMBC players celebrate a teammate’s basket during the second half against Virginia at the NCAA men’s college basketball tournament in Charlotte, N.C. UMBC defeated Virginia 74-54.

There are still moments, even after nearly four decades, when Ernie Myers has trouble believing it all really happened for his North Carolina State team.

The series of tense upsets.

The airball-turned-buzzer-beating dunk to stun top-ranked Houston and Phi Slama Jama. And the 1983 national championship that came with it, capping a run unlike anything college basketball has seen before or since.

“We kind of said we put the madness in March, as in what you see today,” Myers said in an interview with The Associated Press. “That’s why people watch the tournament, because they want to see the upsets.”

Fans won’t get that chance this year with the NCAA Tournament canceled because of the coronavirus pandemic. Still, the sixth-seeded Wolfpack’s win is oft-replayed lore every March and CBS was showing the game Saturday as part of a weekend of March Madness classics broadcast to fill the void on what would have been the first weekend of the tournament.

There’s Lorenzo Charles stuffing home Dereck Whittenburg’s missed 30-footer for the 54-52 win against a team with future NBA greats Hakeem Olajuwon and Clyde Drexler. There’s the late coach Jim Valvano running around searching for someone to hug after just the latest tournament nail-biter for the “Cardiac Pack,” who also edged No. 1 seed Virginia in a regional final to end 7-foot-4 center Ralph Sampson’s college career.

“You’re talking about it gives the fans hope — man, it gives us hope every day that if you don’t give up, anything can happen,” said Cozell McQueen, who had 12 rebounds against Houston then celebrated by climbing to stand atop one of the rims.

He also noted the game’s added significance: Valvano’s inspirational story ultimately aided the creation of the V Foundation for Cancer Research before his death from the disease in April 1993. Charles died in June 2011 in a bus crash.

“It’s been with me,” said Rose, who noted he is often identified as a Phi Slama Jama team member. “For me — this sounds crazy, it’s probably easier for me to say now that I’ve retired — it’s way better to have played in that game and lost than not to have had the opportunity to play.”

It’s still stunning to rewatch UMBC blowing out top overall seed Virginia in the only 16-over-1 upset in tournament history.

Forward Joe Sherburne said he watched YouTube highlights that “gave me goosebumps” for months and still enjoys discovering things from that night like fan video from the arena. But it’s not his first choice of everyday conversation, either.

“If there’s an event or something I do that ends up being cooler than that, that would be great,” said Sherburne, who had 14 points against Virginia. “But I doubt that’s going to happen. I’m all for it being discussed for years down the line.”

George Mason was such a questionable tournament choice that then-coach Jim Larranaga joked his team was an “at-extra-large” entry. There was no second guessing the bid once the 11th-seeded Patriots went to the Final Four after an 86-84 overtime win against top-seeded Connecticut.

The Huskies had spent five weeks at No. 1 in the Top 25 and never dropped below fourth. Yet George Mason overcame disadvantages in size and athleticism to secure a trip to Indianapolis as the party crasher among the big-conference teams.

Before UMBC, the biggest round-of-64 upsets had come with eight No. 15 seeds beating No. 2 seeds. It wasn’t until Richmond beat Syracuse 73-69 that fans believed it could happen.

Syracuse had spent all but one week ranked in the top 10 under Jim Boeheim and was led by first-team AP All-American Billy Owens. Team member Mike Hopkins, now Washington’s head coach, remembers feeling “devastated” but it didn’t linger.

“You got reminded of it – we were the first 15 to lose to a 2 – but you never felt it,” Hopkins said. “We always just won. Coach Boeheim never used it as motivation the following year. It was just one of those things — on to the next one.”

Villanova remains the lowest seed to win it all at No. 8. To do it, the Wildcats had to play the perfect game against AP national player of the year Patrick Ewing and defending national champion Georgetown.

The Miners became the first team to start five black players in the final against the all-white Wildcats featuring Pat Riley and coached by four-time national champion Adolph Rupp. Coach Don Haskins, who died in September 2008, had said he was simply starting his best players instead of trying to make a social statement, though the 72-65 victory eventually expanded recruiting opportunities nationally for black players.