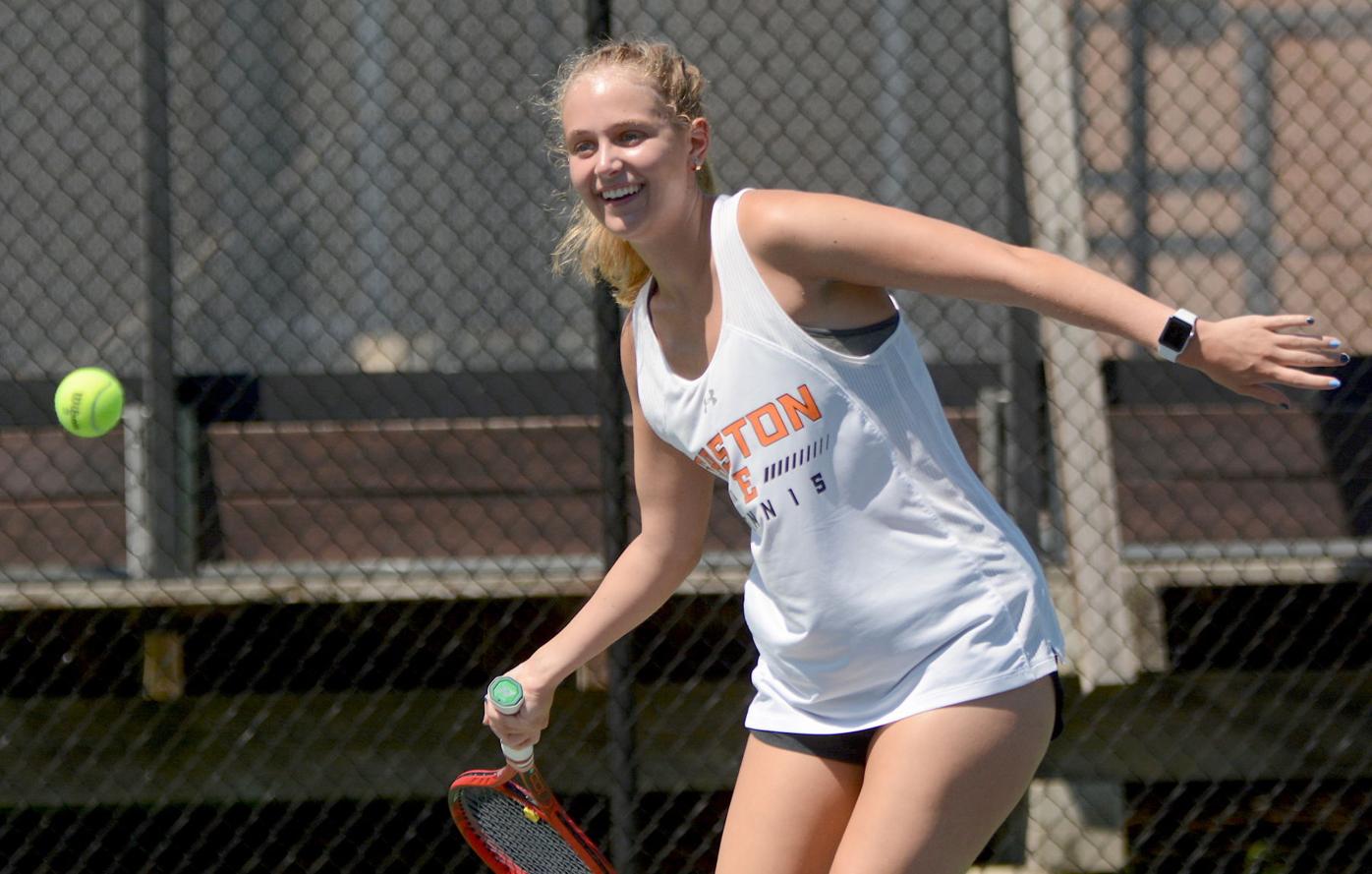 Easton High graduate Allison Cherwien, who went from No. 3 singles as a freshman to a two-time state qualifier in doubles, will take her game to Shenandoah University later this summer. 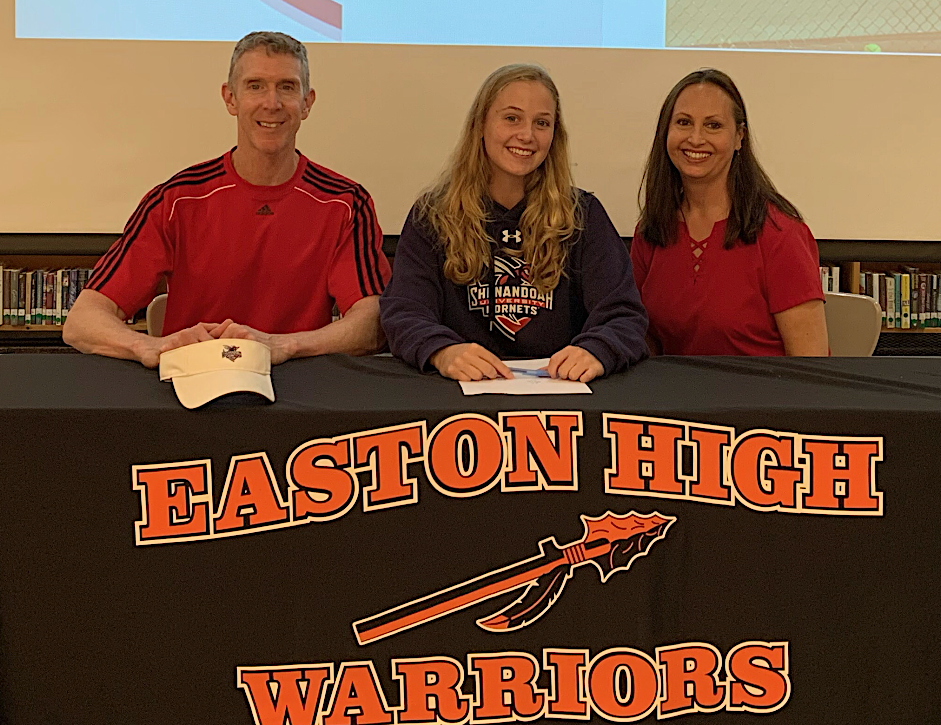 Allison Cherwien, center, signed with Shenandoah University this spring with her father Mark, left, and mother Ellen at her side. 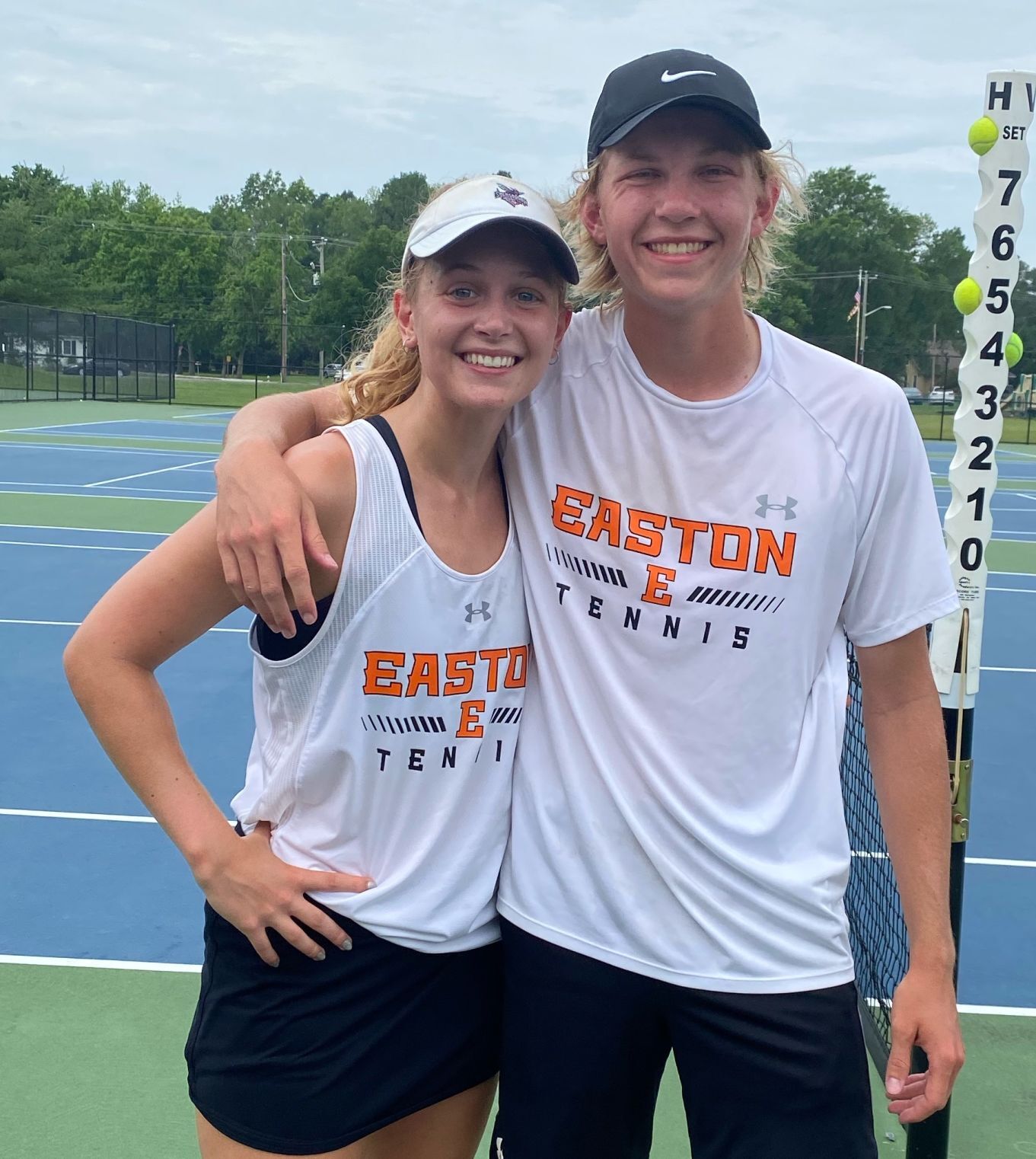 Easton’s Allison Cherwien, left, and Andrew Ottey won the mixed doubles title at the Class 2A East Region championship before falling in the state semifinals this year.

Easton High graduate Allison Cherwien, who went from No. 3 singles as a freshman to a two-time state qualifier in doubles, will take her game to Shenandoah University later this summer.

Allison Cherwien, center, signed with Shenandoah University this spring with her father Mark, left, and mother Ellen at her side.

Easton’s Allison Cherwien, left, and Andrew Ottey won the mixed doubles title at the Class 2A East Region championship before falling in the state semifinals this year.

EASTON — Hoops was her game.

“I kind of got into basketball for a really long time,” Allison Cherwien said. “And I was like, ‘I want to play basketball in college.’”

Then came freshman year at Easton High and Cherwien decided to give tennis a shot just for “fun-zies.”

The Trappe native was already familiar with the game, having played in the Talbot County YMCA youth league under the watchful eye of Susan Claggett. Cherwien soon learned she was pretty good, earning the No. 3 spot on the Warriors’ singles ladder and putting together a 12-1 freshman season.

Then came a casual conversation with teammate Aidan Steinly, who teamed with Lucas Joshi to win the Class 2A state boys’ doubles title in 2019 before heading to Shenandoah (Va.) University.

Cherwien made that official this spring when she signed to play at Shenandoah, a Division III school in Winchester, Virginia.

“I really want to make sure that I’m a really good asset to the team,” Cherwien said of Shenandoah. “I don’t just want to walk on there and be nobody. One of the reasons I want to play in college is that I don’t just want to blend into the student body. I want to stand out like an honor-student athlete.”

Cherwien, who plans to study biology at Shenandoah, certainly stood out during her time on the court at Easton.

She moved to the top of the singles ladder as a sophomore and finished 12-3. Former head coach Dick Kemp paired her with Anna Ewing for the postseason, and watched them win the District 8 and Class 2A East Region championships. Cherwien and Ewing then flirted with becoming Easton’s first state champs in girls’ doubles since 1987 — when Katy Storch and Michelle Devine won the last of their three consecutive titles — by reaching the 2019 state semifinals and eventually placing third with a 4-6, 6-3, 1-0(7) come-from-behind win in the consolation final.

Her confidence gained another boost in the summer of 2019, when she won a United States Tennis Association tournament in Delaware, and continued improving her game in adult leagues and junior competitions.

“Here it’s kind of like you play the same people,” Cherwien said of her high school schedule in the Bayside Conference. “Playing in the USTA and adult leagues showed me that I am actually a good player because I play with people that enjoy the sport and have a passion for it as well, and I can compare myself to them.”

Cherwien’s summer slate again figures to be busy. Her USTA docket includes an Ocean City tournament with Easton teammate Kate Boldt. She plays in a USTA 4.0 women’s league on Tuesday nights and is also a substitute for a mixed doubles league. That combined package has proved beneficial.

“Playing with people my age is a completely different game than playing with older people,” Cherwien said. “Because older people are more worried about placement, whereas people my age tend to worry more about like, ‘Oh, was that impressive or was that powerful enough?’ Playing with the older people has made me more conscious of, ‘That was a powerful shot, but was that well placed? No.’ So I’ll work to place it better. And I think I have with my singles and doubles.”

“I think the best part of my game is I don’t really get in my head that much, which is a really big part of tennis,” Cherwien said. “It’s important for tennis to be just like, ‘OK, that was one point. I messed up. On to the next one.’ Like I will normally do something stupid and I’ll just laugh at myself and just go on to the next point.”

COVID-19 wiped out the 2020 high school season, but Cherwien capped her career at Easton with another strong showing in a shortened schedule. She went 4-2 in singles play — losing only to Kent Island’s Ana Castro, who went on to become the Bayside Conference’s first state champ in girls’ singles in 38 years — then teamed with fellow senior Andrew Ottey for another deep postseason run.

“I like mixed doubles because I grew up playing against guys. I like whacking the ball at ‘em” Cherwien said laughing. “And the way Andrew plays reminds me of how my old doubles partner Anna Ewing used to play. We clicked really well.”

Cherwien and Ottey won the 2A East Section II title with a 6-2, 6-4 victory over Kent Island’s Caroline Carmean and Carlos Wilder, and advanced to states with a 6-0, 6-0 sweep of North East’s Katy Hammer and Greg Kosinski in the 2A East final. Cherwien and Ottey were locked in a tight first set with Century’s Danielle DeLawter and Evan DeLawter in the state semifinals before losing 6-4, 6-0 to the eventual state champions.

“I honestly thought we were going to make it to the finals but the people we played in the semifinals were really good,” Cherwien said. “We kind of lost it after that (6-4 first set). It was tough to come back, but it was fun playing with him. He’s really good to play with.”

“It’s a completely different game,” Cherwien said comparing the two. “Doubles is more like you have to set your partner up and worry about them, and making sure they’re good. Whereas singles, it’s just like you out there on your own little island, and making sure everything is on you, which I don’t mind. But I definitely like doubles more because I like having my partner there so I can set them up.”

No matter whether it’s singles or doubles, Mark Cherwien, Allison’s father and Easton’s head coach, has seen his daughter’s progression in person and through videos taken on his cell phone.

“It’s like night and day,” Mark Cherwien said. “I have some recordings of her hitting serves or hitting shots that freshman year and you wouldn’t even know it’s the same person. It’s pretty cool how much her game has transformed.”

That transformation has been aided by teaching in the after-school and summer programs she once took part in under Claggett, and picking up added instruction from Jay Aldridge, the longtime instructor who was instrumental in helping Cambridge-South Dorchester become one of the tennis dynasties in Bayside Conference history during the Bill Busick and Jackie Wood coaching years.

“Once we got into summer (2020) and we could get back and play, between hitting, doing some playing, working with Jay, her game has definitely gone to a new level between last year and this season for sure,” Mark Cherwien said.