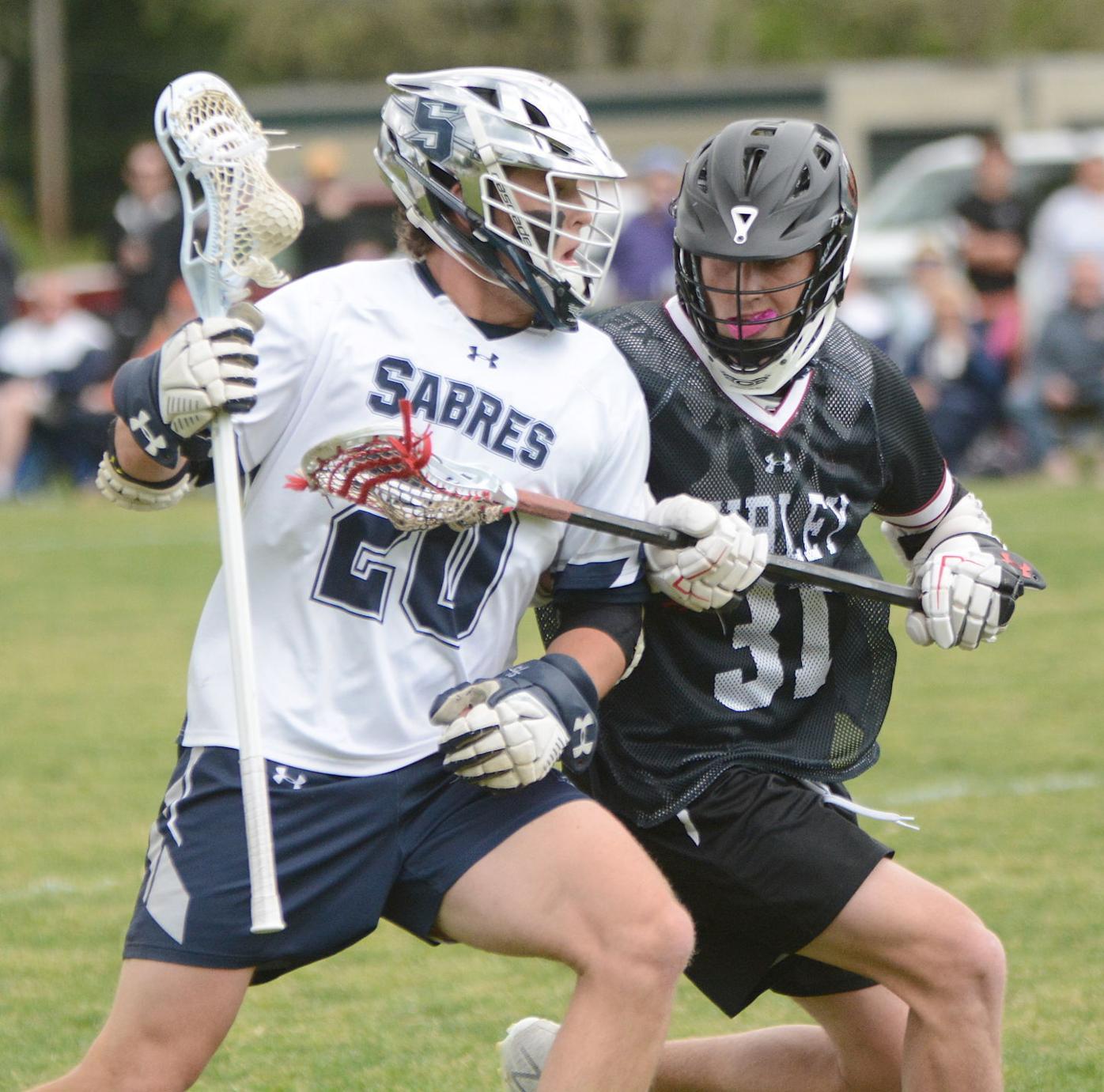 Saints Peter and Paul senior Cory Morgan, left, who had four goals and an assist, drives toward goal as Archbishop Curley’s James Zingo defends during Friday’s first half.

Saints Peter and Paul’s Cole Messick (11) lines up a shot during Friday’s second half against Archbishop Curley.

Saints Peter and Paul senior Cory Morgan, left, who had four goals and an assist, drives toward goal as Archbishop Curley’s James Zingo defends during Friday’s first half.

Saints Peter and Paul’s Cole Messick (11) lines up a shot during Friday’s second half against Archbishop Curley.

EASTON — Pat Tracy didn’t need to look at the game film for confirmation.

“This is the first game that’s really been a close game for us and an opportunity for us to execute in a tight game,” Saints Peter and Paul High’s boys’ head lacrosse coach said. “Those fundamentals, when they break down you are not going to win those games. Hopefully it’s a lesson we learn from this game. Not shooting well, not picking up tough ground balls, getting out ground-balled … that’s not going to win games for you.”

The Sabres led for three-plus quarters Friday afternoon before Archbishop Curley went on a 5-1 scoring run over the final 17 minutes to pull out a 9-7 victory in a Maryland Interscholastic Athletic Association B Conference showdown that could be replayed in the approaching playoffs.

“I didn’t feel like we were at our best,” said Tracy, who was minus senior attackman Pierce Gilden and defenseman Aaron Ewing due to injuries. “We already are limited in numbers and we had a little adversity with some injuries and I think that kind of set us back a little bit.

“But we didn’t play the smartest brand of lacrosse,” Tracy continued after the Sabres’ five-game winning streak had been halted. “I think we’ve gotten away (from that) a little bit. We’ve gotten lucky and won those games by not being crisp in certain areas of the game and not executing the fundamentals. And we’ve been able to get away with that and today it kind of came back and bit us.”

“I think at the end in the fourth quarter, we were in shape and we were able to get to ground balls, and we were able to just persevere,” Curley head coach Chris Ogle said. “We didn’t come out very strong in the first quarter. We weren’t at our best.”

The Friars were good enough though in the fourth, especially with their speedy transition game. Denzel Evans (two goals, two assists) scored off a feed from Kirk Heise 1:45 into the fourth period to forge the game’s fifth tie at 6-6. Then with the Friars serving a 1-minute slashing penalty, James Zingo gained possession and scored to put Curley ahead to stay with 8:29 left. Just one minute later, the Friars’ transition game struck again, Caleb Haire setting up Denim Evans’ goal for an 8-6 lead.

“I think out of their nine goals, six or seven of them were in transition or broken situations, and it’s something we work on all the time where we got to get better defensively,” Tracy said. “That killed us today. It killed us not getting in the hole. It killed us getting back-door cut, just not seeing guys and where they need to be in transition and not picking up.

“Six on six we’re fine,” Tracy said of his defense. “We do a great job six on six. But it’s those gray area moments of the game where we need to be a lot better.”

Morgan answered 25 seconds later, battling through three defenders before snapping in his fourth goal into the net, pulling the Sabres within 8-7. Curley was called for a slash on the play, but Sts. Peter & Paul could not deliver the equalizer on the EMO.

“Credit to them,” Tracy said of Curley. “They’re always a well-coached, tough team. They out ground-balled us. We just didn’t shoot well. We didn’t finish our opportunities, and again, that’s been something that’s been an issue for us all year. And it came back and kind of bit in this game. And we’ve got to figure out a way to finish those opportunities.”

Denim Evans netted his second goal with a laser than went off Heister’s arm for a 9-7 lead with 3:19 remaining.

“We found a way to win and that’s what matters at the end of the day,” Ogle said. “Things weren’t going our way. We got into some foul trouble, things that were just real uncharacteristic that we haven’t done all year. And we still found a way to win.”

Kyler Krewson scored the only goal of the first quarter to give Sts. Peter & Paul a 1-0 lead.

Then came a seesaw second quarter. Denzel Evans scored with 8:56 left in the period to pull Curley even, only to have a Morgan’s rocket nudge the Sabres back in front 32 seconds later. Rock’s left-handed shot tied the game at 2-all with 7:43 left in the first half. Morgan again pushed Sts. Peter & Paul back in front 39 seconds later with a rip from the right side. But Curley needed just six seconds to tie the game at 3-3 when Denzel Evans set up Haire’s score.

Twenty-two seconds into the third quarter, Morgan came from behind the goal to tuck a shot past Kalb for a 4-3 Sabres lead. Less than a minute later, Denzel Evans set up Haire’s second goal for a 4-4 tie. Sts. Peter & Paul grabbed a two-goal lead midway through the period before the Friars began their decisive 5-1 closing run.

“I wouldn’t be surprised,” Ogle said of a potential rematch in the playoffs with the Sabres. “They’re a great team. No matter how many kids they got on the team they always find a way to give us a battle, especially when we come to the Eastern Shore.”

Curley remains atop the MIAA B Conference, followed by Friends (4-1, 4-1) and the Sabres. All eight teams in the conference make the postseason, which is scheduled to begin with the quarterfinals on May 14, the semifinals May 18, and the championship May 21

“Hopefully we’ll get a chance to see them again,” Tracy said of Curley. “It’s always a battle with those guys and we’d just love to get an opportunity to play them again.”