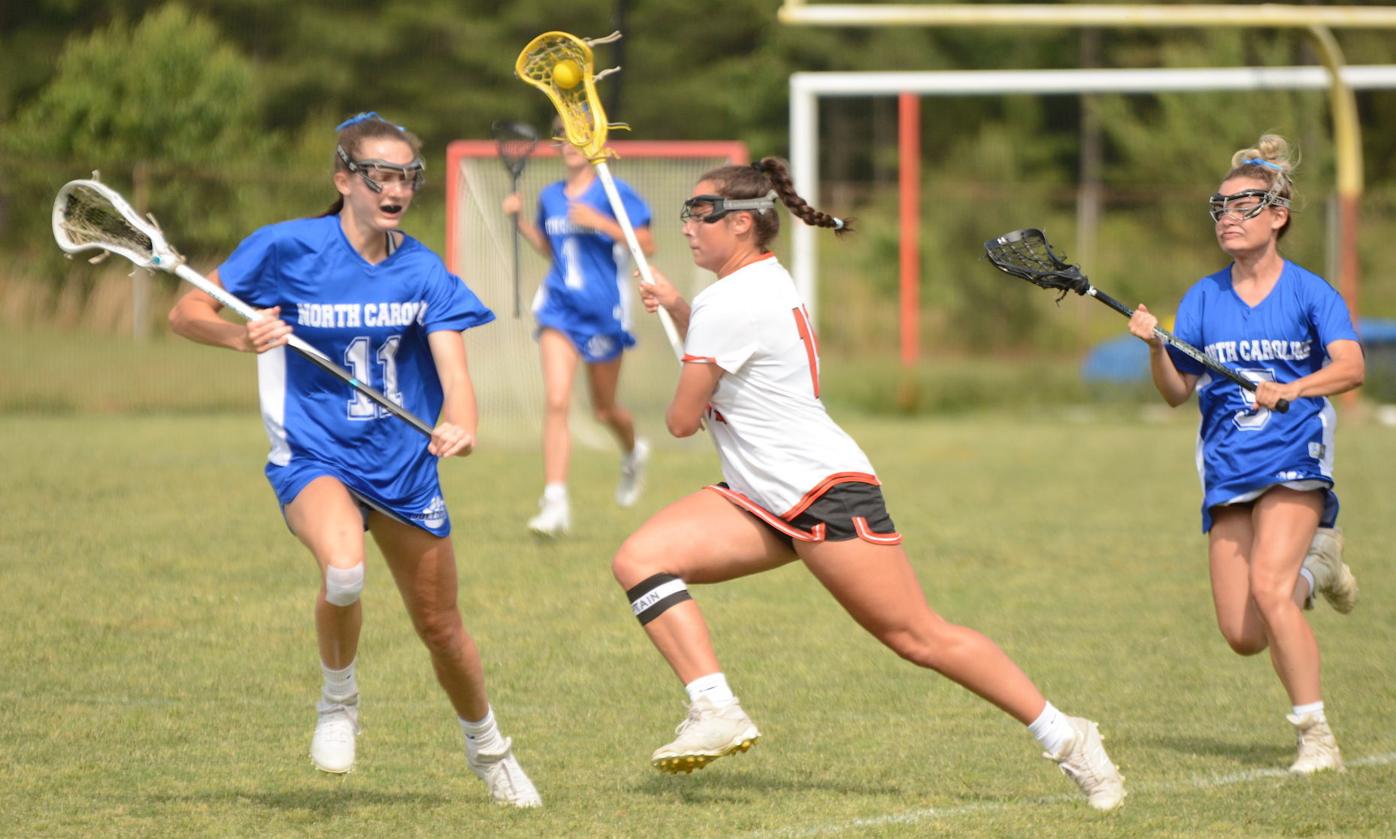 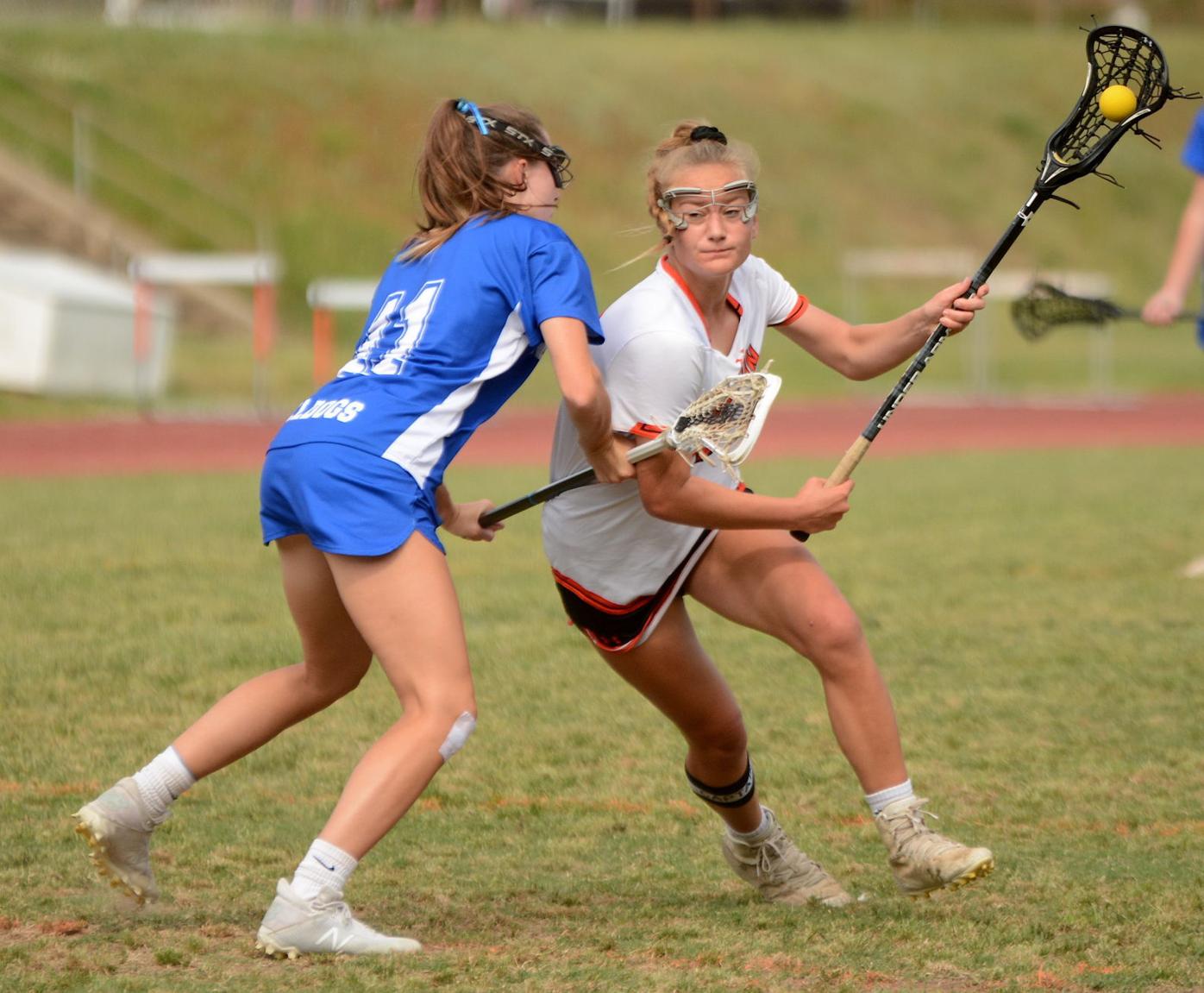 Anna Roser, right, who scored five goals, drives to the net during Friday’s second half. 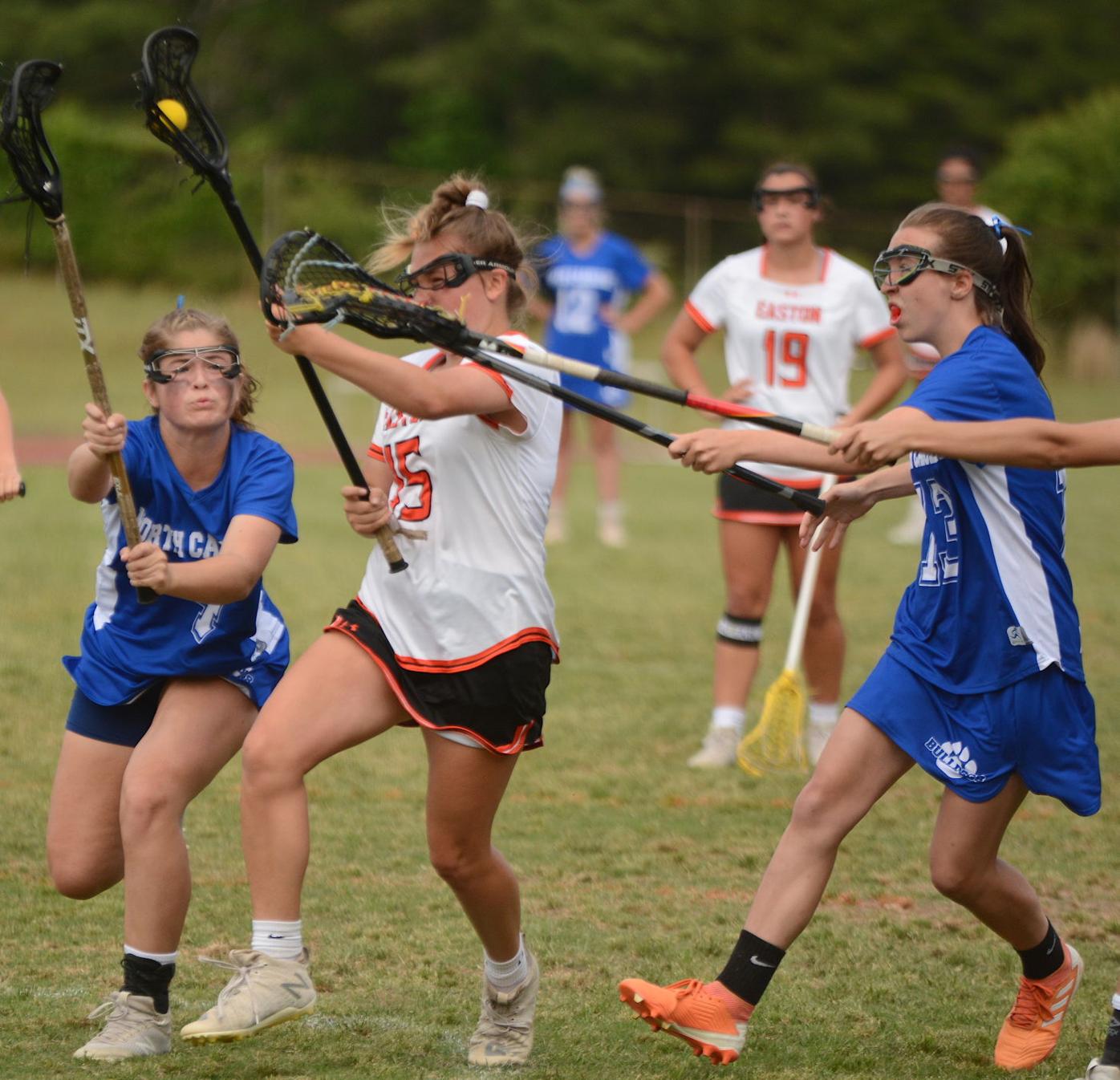 Easton’s Emily Currie, 15, drives toward the goal under heavy pressure from North Caroline’s defense during Friday’s first half.

Anna Roser, right, who scored five goals, drives to the net during Friday’s second half.

Easton’s Emily Currie, 15, drives toward the goal under heavy pressure from North Caroline’s defense during Friday’s first half.

The finish was fairly strong as well, totaling five of the last seven scores.

But there was that mid-game patch, when Easton High’s girls’ lacrosse team watched its eight-goal cushion shrink to four, that it might spend some time on during practice this week in preparation for the upcoming postseason.

The Warriors’ start and finish proved enough Friday afternoon though, as Lily Osborne, Anna Roser and Emily Currie each scored five goals to pace a 17-10 victory over North Caroline.

“We definitely need to work on that,” Roser said of stretch where the Bulldogs outscored Easton, 6-2. “For the most part we stay on top of it during the games. But today we just sort of stopped moving on offense and stopped talking on defense for a couple minutes there. We came together and talked about it and I definitely thought it got better toward the end of the game when we picked it back up and took our lead back.”

The Warriors (4-3), whose win Friday was the first time they’ve won consecutive games this season, took a 1-0 lead on a free-position play with 62 seconds elapsed, when Osborne charged in, ducked a stick-check and snapped a left-handed shot past North Caroline goalie Adriennna Rodriguez. Less than 4 minutes later, Kat Knox curled from around the back of the goal a tucked a score into the left side.

Easton widened its lead to 3-0 on one of the game’s more memorable plays, as Warrior goalie Anissa Wallace (seven saves) made a short, broken-field run after a save and dished to Osborne, who took off on a 75-yard sprint. As Osborne approached the goal, she took two sticks to the head, stopped to look for a penalty call that never came, then dumped a shot over Rodriguez’s shoulder.

Roser scored her first goal on a free-position chance with 16:42 left in the first half before North Caroline freshman Claire Blue (four goals) beat Wallace low less than 2 minutes later.

Easton answered, as Currie sandwiched a pair of goals around scores from Osborne and Roser for an 8-1 lead. Corinne Webb’s goal with 6:25 remaining in the first half end that spree, but Currie and Roser scored a little over a minute apart to give the Warriors one of their biggest leads at 10-2.

Blue’s goal with 18.5 seconds left in the first half pulled North Caroline within 10-3 at half, but Osborne restored that eight-goal bulge just 12 seconds into the second half, winning the draw control, blazing down field and scoring. The back and forth continued with Blue scoring 25 seconds after Osborne, and Currie answering less than 5 minutes later for a 12-4 Easton lead.

But the Bulldogs (2-5) whittled their deficit to 12-8 over the next 5 minutes, with Hailey Chester, Blue and Emilee Lawton each scoring in a 1:23 span. North Caroline picked up another goal on a failed clear by Easton.

“Played phenomenal for those nine minutes that we did come back,” North Caroline head coach Jenna Riordan said. “Girls finally brought it together, good momentum kept us flowing and we had a couple of really nice shots.

But Easton went back to work, as Roser, Morgan Lewis (two assists), Currie and Roser each scored over the following 8 minutes to put the Warriors up 16-8, a lead that was never in jeopardy the remaining 5:23.

“We needed to clean up our fundamentals; we weren’t passing, catching very well,” Lawton said of North Caroline’s comeback bid. “And we started to do that in the second half and we started to move the ball more on attack, defense was talking more. And so it was really kind of just basic things. They did well, beginning and end. The middle, you just sort of forget about that.”

RIDGELY — Zach Bramble had a hat trick, and Jack Gearhart and Ethan Keenan (assist) each scored twice Friday to lead the Warriors to their second straight win.

On Thursday, the Warriors rolled to a 16-8 victory over Kent County in Worton. Bramble had four goals and three assists and Butler scored four times. Keenan had a hat trick to go with two assists, Gearhart scored twice and set up three goals, and Filion had four assists and a goal. Conner Moore scored one goal and Hudson Royer notched his first career varsity goal.