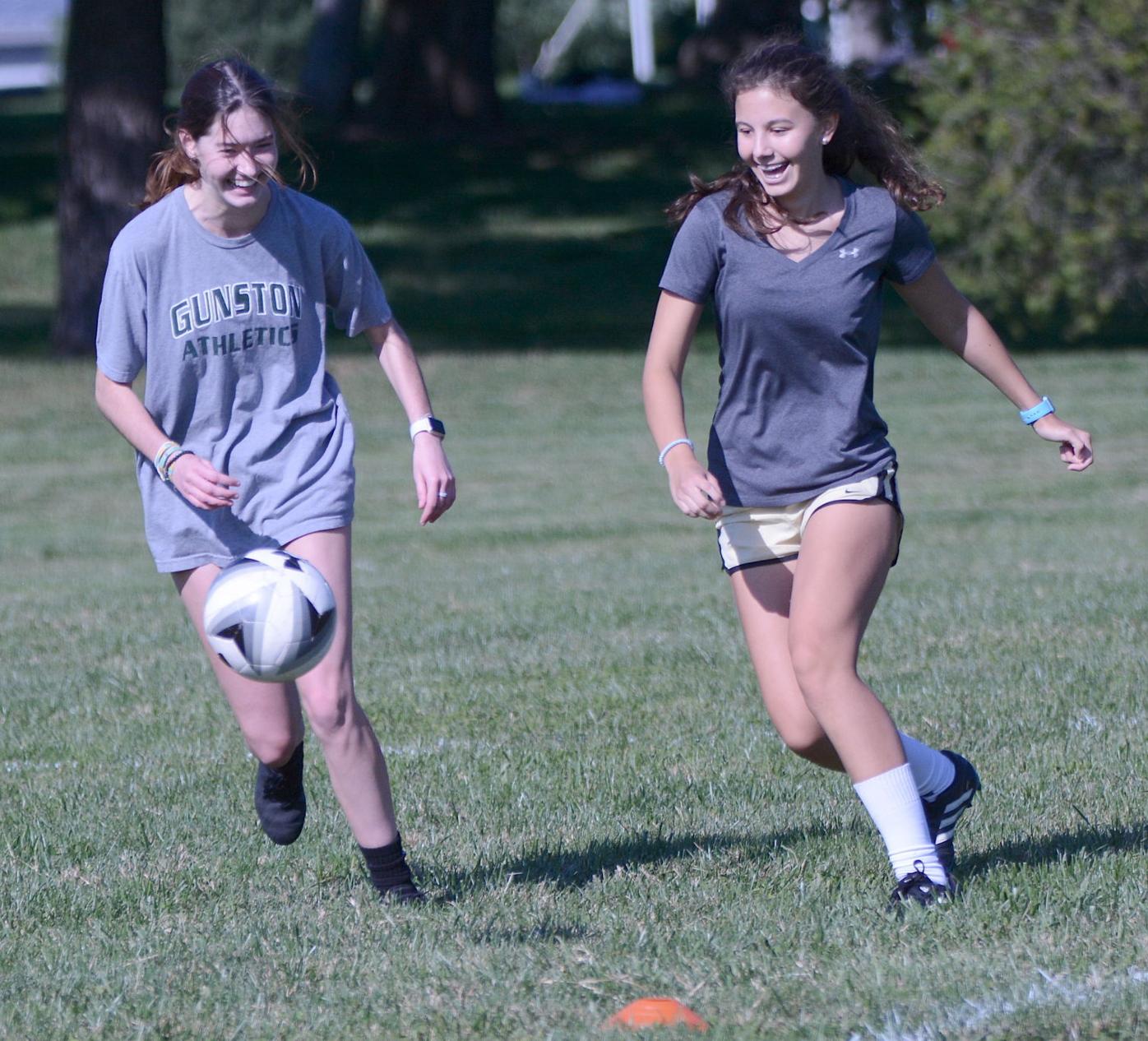 Charlotte Cook, left, and Sofia Angarita, who figure to be key players this season for the Herons, laugh during a drill Tuesday afternoon. 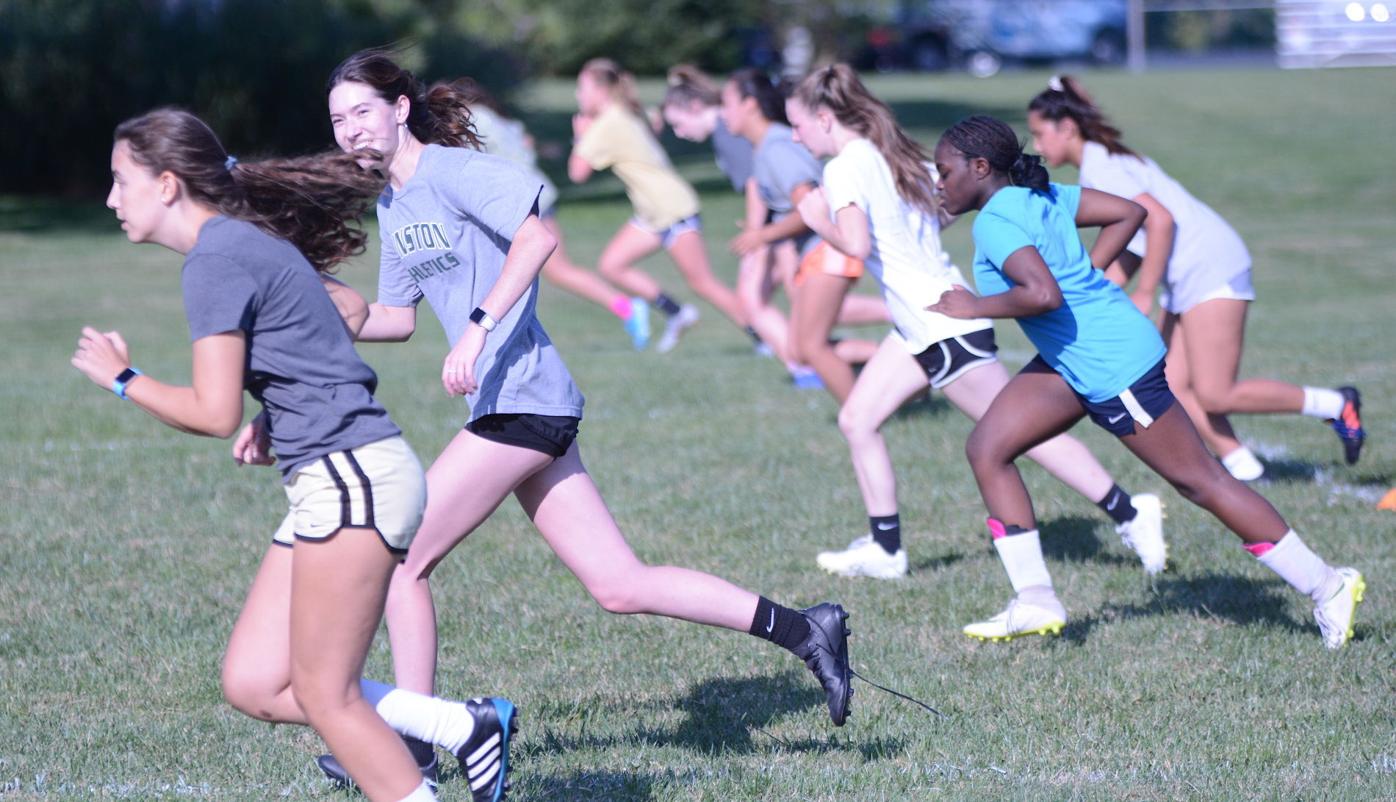 Charlotte Cook, left, and Sofia Angarita, who figure to be key players this season for the Herons, laugh during a drill Tuesday afternoon.

The Herons were returning a strong core from last year’s 7-6-1 team that reached the Northern Maryland Soccer League championship and qualified for the Eastern Shore Independent Athletic Conference postseason.

Mellinger’s enthusiasm was understandably deflated somewhat over the summer when it appeared Gunston’s sports seasons were going to be wiped out this fall by the ongoing COVID-19 pandemic. But when the school’s steering committee, in consultation with the Queen Anne’s County Department of Health, noticed how virus metrics and Gov. Larry Hogan’s advisories had evolved, it was decided the seasons — although abbreviated — were back on.

“I remain excited,” said Mellinger, who is scheduled to have seven practices prior to Friday’s season-opener against Worcester Prep. “We’re starting (practice) a little bit later than we were hoping for obviously. So we’ve had a quick turn. It’s been a challenge, but it’s been fun.”

Mellinger also know it’s going to be tougher making the ESIAC playoffs this season because the conference’s five schools — Gunston, Saints Peter and Paul, Worcester Prep, Salisbury School and Salisbury Christian — only play each other once during the regular season, instead of twice as in the past. The two teams with the best records at the end of the regular season will meet for the ESIAC title.

“So basically every game is a playoff game for us,” said Mellinger, whose team will play only ESIAC teams this season and not compete in the NMSL. “That’s the mentality we’re going to bring into the season. Every week is a playoff game.”

Cedar Foster, who set a school single-season record for goals (14) last year, has graduated, but Mellinger appears to have a solid nucleus to build around.

The defense could be a strong point with senior keeper Olivia Hershey returning for her third season between the posts.

“She was a center midfielder (in 2018), and at the time it was goalie by committee, and she stepped up big time,” Mellinger said of Hershey. “She has kind of made her home in the goal. She does an exemplary job.”

A starter since she was a freshman, senior Sydney Nittle returns at sweeper, providing strength in the middle. Junior Ashley Escobar will be at right back, while Mellinger is still trying to figure out who will flank Nittle on the other side.

The Herons will play with a 3-5-2 alignment this season, with Mellinger moving talented junior Charlotte Cook into a center defensive midfield role in front of Nittle.

“She a very talented, multi-sport athlete,” Mellinger said of Adams. “Very athletic. She’s got quick feet. Sort of has a nose for the ball.”

Junior midfielder Sofia Angarita, who can play a defensive or attacking role, “probably has the best footwork on the team,” Mellinger said. She will be joined by sophomore Jenna Frederick.

“She’s sort of the motor of the team; always around the ball, tenacious defender,” Mellinger said of Frederick. “I’d like to see her take a step this year offensively. But she’s just got a motor that doesn’t quit.”

Mellinger also thinks sophomore Maddie Algier could also be an impact player at the midfield.

Junior striker Aidan Ireland totaled 12 goals a year ago and will be paired with Lexi Meikleljohn up top.

“The good news is we have a lot of great returners that have been doing some work on their own in anticipation for the start-up,” Mellinger said. “My freshmen won’t necessarily be thrust into a starting role right from the get-go, not to say that I don’t have talented enough freshmen that could crack the starting lineup. But they can sort of learn and understand the system a little bit before they have to see significant time.

“I think we’ve got some good leadership with our seniors and we have some swing players that are really going to have an opportunity to make a step in the right direction; help guide some of our younger players and really make an impact,” Mellinger continued. “So we have a good core group and I think that core group is going to be the heartbeat of the whole team. How that core group does is going to be real indicative of how we finish.”