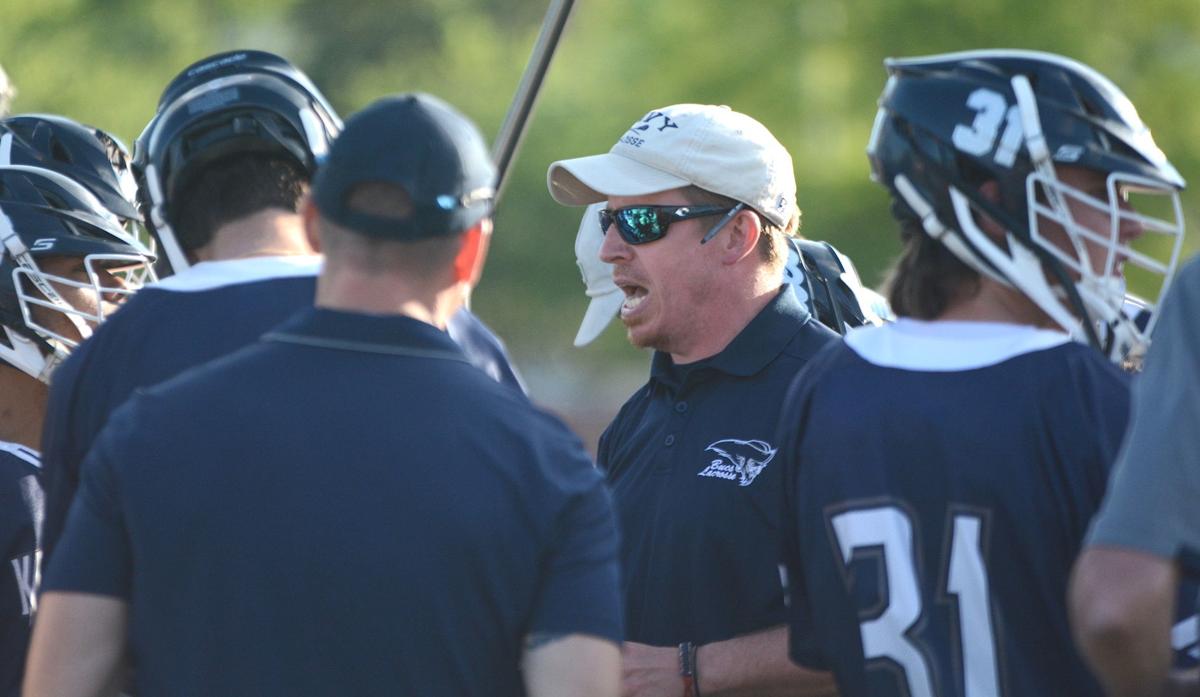 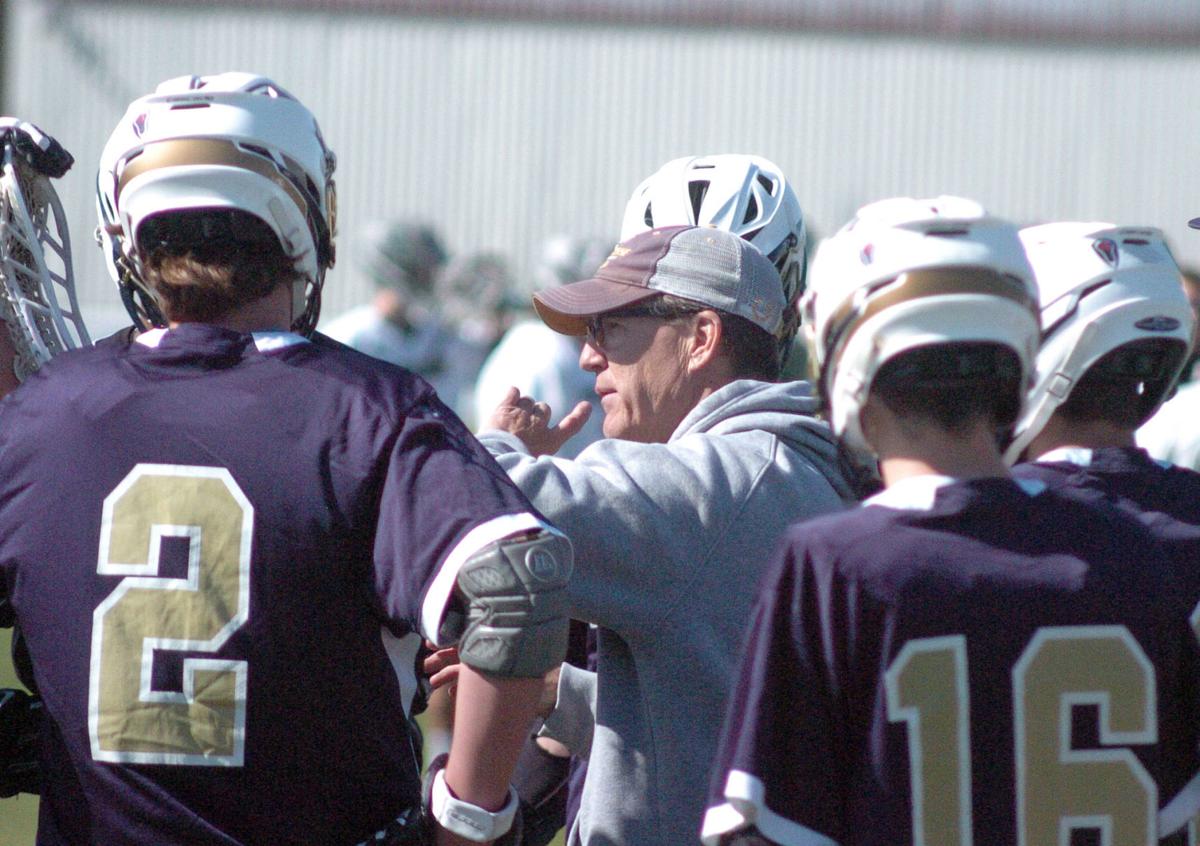 “We have no closure at this point,” said Cambridge-South Dorchester boys’ lacrosse coach Steve Hurley, center, who didn’t have the opportunity to say anything to his team when school closed last Thursday.

“We have no closure at this point,” said Cambridge-South Dorchester boys’ lacrosse coach Steve Hurley, center, who didn’t have the opportunity to say anything to his team when school closed last Thursday.

With two weeks of regular-season games cancelled for the spring season because of Covid-19, coaches for the Mid-Shore’s boys’ lacrosse teams are hoping they’ll get onto the field to practice again on Monday, March 30.

With schools closed, that’s the earliest teams can begin to practice again, according to the latest announcement from the Maryland Public Secondary Schools Athletic Association, and April 6 is the earliest date that regular-season games can begin.

For seniors especially these are anxious weeks as the fate of their high school playing careers is completely out of their hands. It’s not easy for coaches either, who described the virus’s impact on their seasons so far during telephone interviews Monday evening.

Cambridge-South Dorchester High head coach Steve Hurley didn’t even get a chance to talk with his players before they cleared the school.

“Dorchester County’s after-school stuff was shut down on Thursday. We got a call at 2:30 saying all after-school programs are shut down,” Hurley said. “So we never had the opportunity to even say anything. Kids were about to come out to practice and 15 minutes before school was out they shut it all down, so they all had to get on the bus and go. So we didn’t have the opportunity to say anything. We have no closure at this point.”

According to MPSSAA directives, all interscholastic athletic teams are required to cancel all team practices until schools are reopened.

Hurley did have an inkling about what was going to happen, which came up in a conversation with Easton head coach Dennis Keenan during a scrimmage.

“We scrimmaged Easton on Wednesday evening and before we started I told Keenan, I said, ‘You know this is probably going to be the only chance we get to play all year,’” Hurley said. “Because the state was starting to rev up and starting all of their stuff that they were working on. So you could kind of see it coming.”

Like all the coaches and players, Hurley hopes part of the season will be salvaged.

“I hope we can get some season out of it,” Hurley said. “I hope we can get something, but I’m going to be surprised because if things continue, the governor again as you know, shut some more stuff down today. … It’s just a wild time. I think these two weeks will tell us. If we start getting contact cases in the state then I think we’re going to definitely bag the season and who knows what else.”

Like most of the Mid-Shore teams, the Vikings anticipated a highly competitive season with many experienced players returning, including nine seniors and the entire offensive unit that has played together since they were sophomores.

“If they don’t get to play their season, that would be a shame for them,” Hurley said.

Some former Vikings are, were, playing lacrosse in college, which has been shut down for the season. Fortunately, the NCAA has granted all spring college athletes another season of eligibility.

Keenan said he told his players at practice on Thursday about the two-week school closure.

“We just talked about: keep working out, keep doing your courses online or whatever we have to do to keep your grades up, take care of yourself and your family, and we’ll meet up again in two weeks,” said Keenan, who has over a dozen seniors on his roster.

Queen Anne’s County’s players and coaches learned about the closure while on the way to a scrimmage Thursday at Annapolis Area Christian School.

“I was hoping to keep it quiet until after the game, but cell phones prevented that,” Lions head coach Brad Niesz said. “The boys ended up playing and just really enjoying themselves. I don’t think anybody wants to believe it’s the last time they’re going to be on the field together, but they played their hearts out and had a lot of fun doing it.”

Queen Anne’s has some 12 seniors on the roster this year.

“We told them to keep a stick in their hand, but we’re obviously not allowed to have anything to do with it,” Niesz said. “I have no idea if they’re making an effort to get together. Since school let out we’ve even had more directives from Governor Hogan and that administration’s concern. My hope is that people are doing the best that they can to sort of do what the government’s asking, and I’m hoping that that can get us back on the field because we have a really good group on the field this year. A really good group, and I don’t just mean athletes, I mean they’re really jelling and getting along. We’ve had a great start to our season.”

Kent Island’s players and coaches talked about the possibility of a closure last Tuesday after a scrimmage. Buccaneers head coach Bobby Woolley said his post-game locker-room speech went something like this:

“Expect anything, don’t be surprised at anything, hold onto your hopes for whatever may or may not happen, just try to remain positive. Just know that in the end we’re all here having fun together, playing the game that we love, but in the grand scheme of things it’s a small part of a big picture.”

Woolley thinks his players, including 15 seniors on a 39-player roster, are now “longing for normalcy. With no questions answered, they have no idea if they’ll see high school normal again.”

The Bucs did get to scrimmage against South River and Westminster on March 7 and Appoquinimink (Del.) last Tuesday.

“These guys have been tremendous through the off-season,” Woolley said. “Normally it’s like pulling teeth to get the numbers you’re proud of through the off-season. And we really preached our grit factor from a cultural perspective, putting in the work so that game-day becomes your pay-day. We had an average of about 30 guys showing up four days a week to off-season workouts and happy about it. So we’re really optimistic about where our season could go for us.”

North Caroline is set up to have what could be its most competitive season ever with at least nine seniors, most who have been playing together for four years.

The Bulldogs scrimmaged on Thursday against Worcester Prep.

“I played everybody,” Bulldogs head coach Ben Bradner said. “It was a scrimmage. I didn’t think about it as the last game. And then the ruling came down and we were done.”

Bradner said many on his team have played together in other sports and this spring is their last chance to play as a group.

Saints Peter and Paul, which plays in the Maryland Interscholastic Athletic Association, got in one regular-season game, a 19-10 setback away at Severn School on March 11, and was scheduled for a home game on Friday that was cancelled.

“I spoke to our guys on Friday,” Sabres athletic director and head coach Pat Tracy said. “Obviously it’s a tough conversation to have especially since we had only played one regular-season game and we were supposed to play our second regular-season game against Mt. St. Joe on Friday. We were supposed to play on Friday and I had to break the news to them there. It was a tough conversation to have with the guys especially at this time of the year when we’ve been practicing for about a month and we’ve had some successful scrimmages. Our first game was against Severn and didn’t go our way but I felt like we were learning. As a young group and a small group, in terms of numbers we don’t have a huge roster, we were really starting I think to develop and to learn some things and start to really move together in the right direction as a team.”

The MIAA has suspended all athletic activities through March 29.

The Sabres are fortunate in one respect. They don’t have any seniors.

Tracy said they are taking a cue from former Navy SEAL commander John “Jocko” Willink who likes to face problems with the word “Good.”

“When you face any type of adversity you just say good,” Tracy said. “You learn how to deal with it and you learn how to handle it. It’s something that I really stress with our guys. This isn’t how it’s drawn up and this isn’t how we want it to be and obviously it’s devastating, but at the same time you have to look at the bigger picture. There’s a lot going on in this world and we’ve got to worry about our health and worry about each other and all these other things, and it’s a little bit of adversity that hit us.

“How are we going to handle it? Throw athletics aside. Feel sorry for ourselves that we aren’t able to practice, aren’t able to play games, or are we going to figure out a way to find the positives of it and try and get through this. Not just get through it, but you know be a good brother, be a good son, whatever it is, being able to handle this the right way and to move forward.”