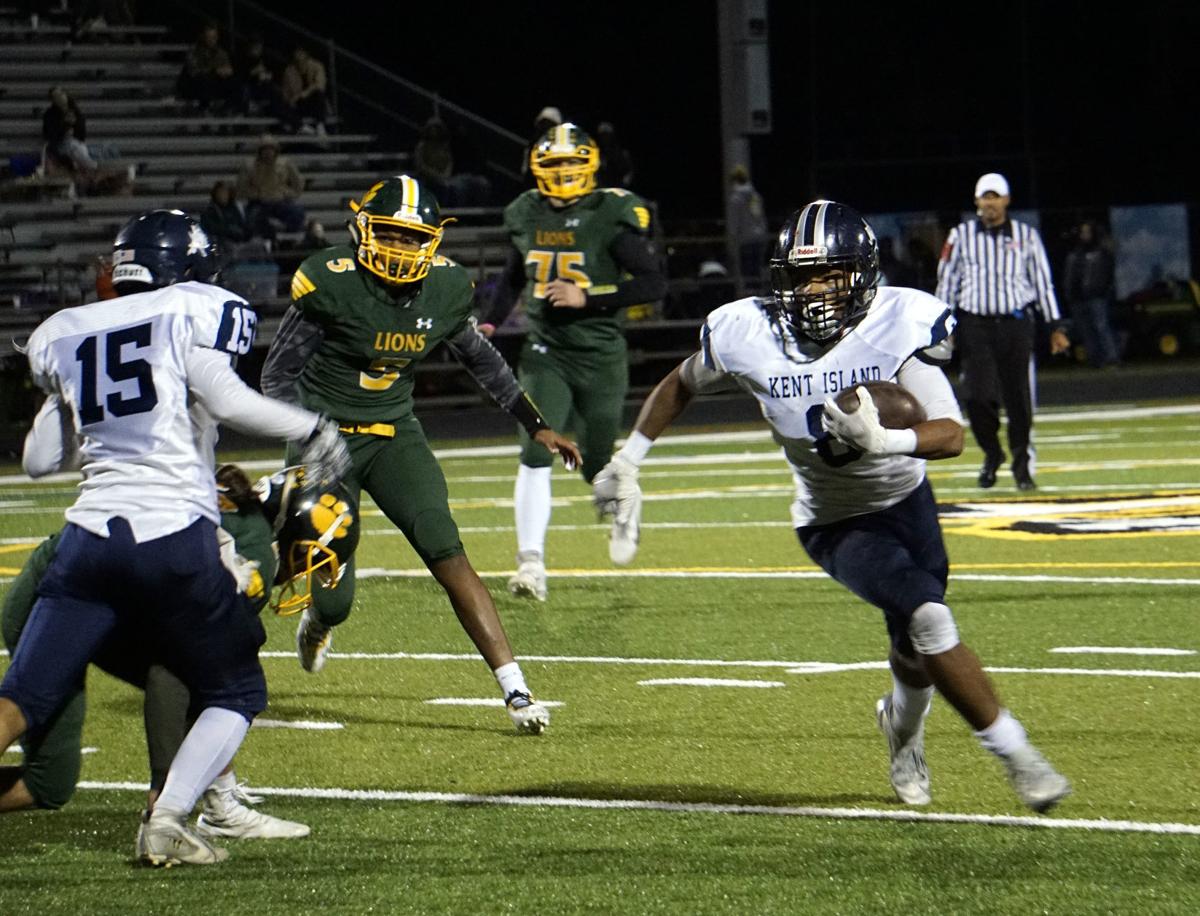 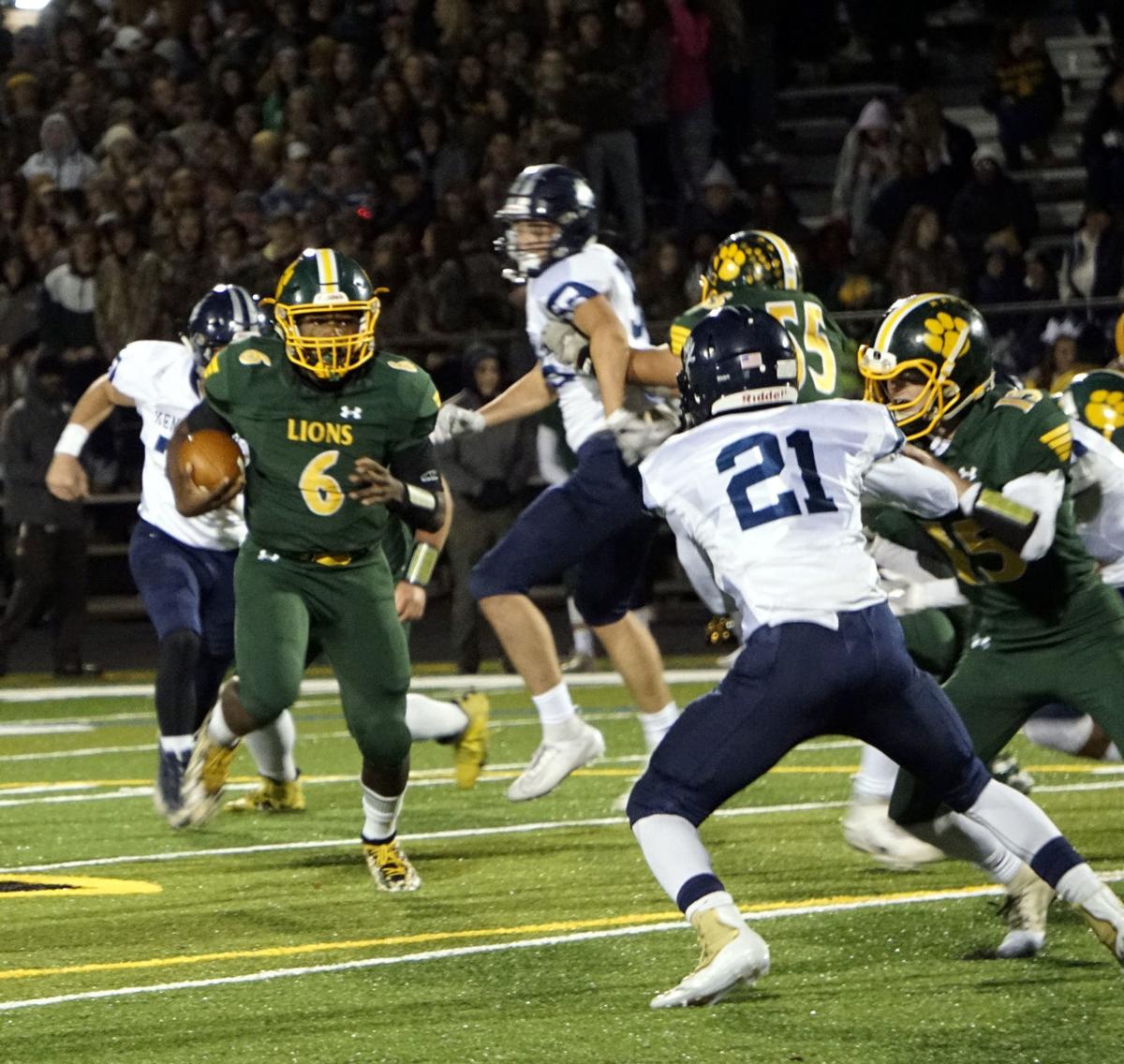 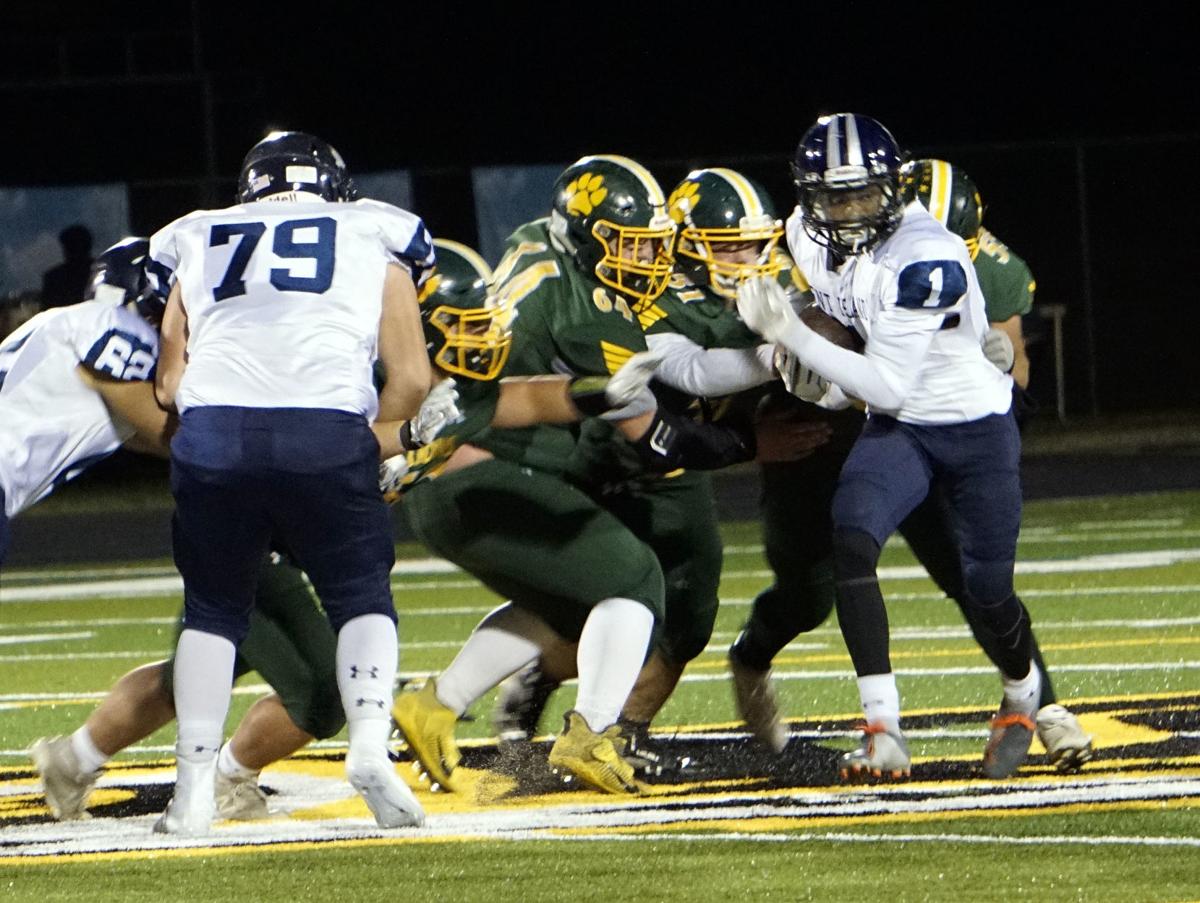 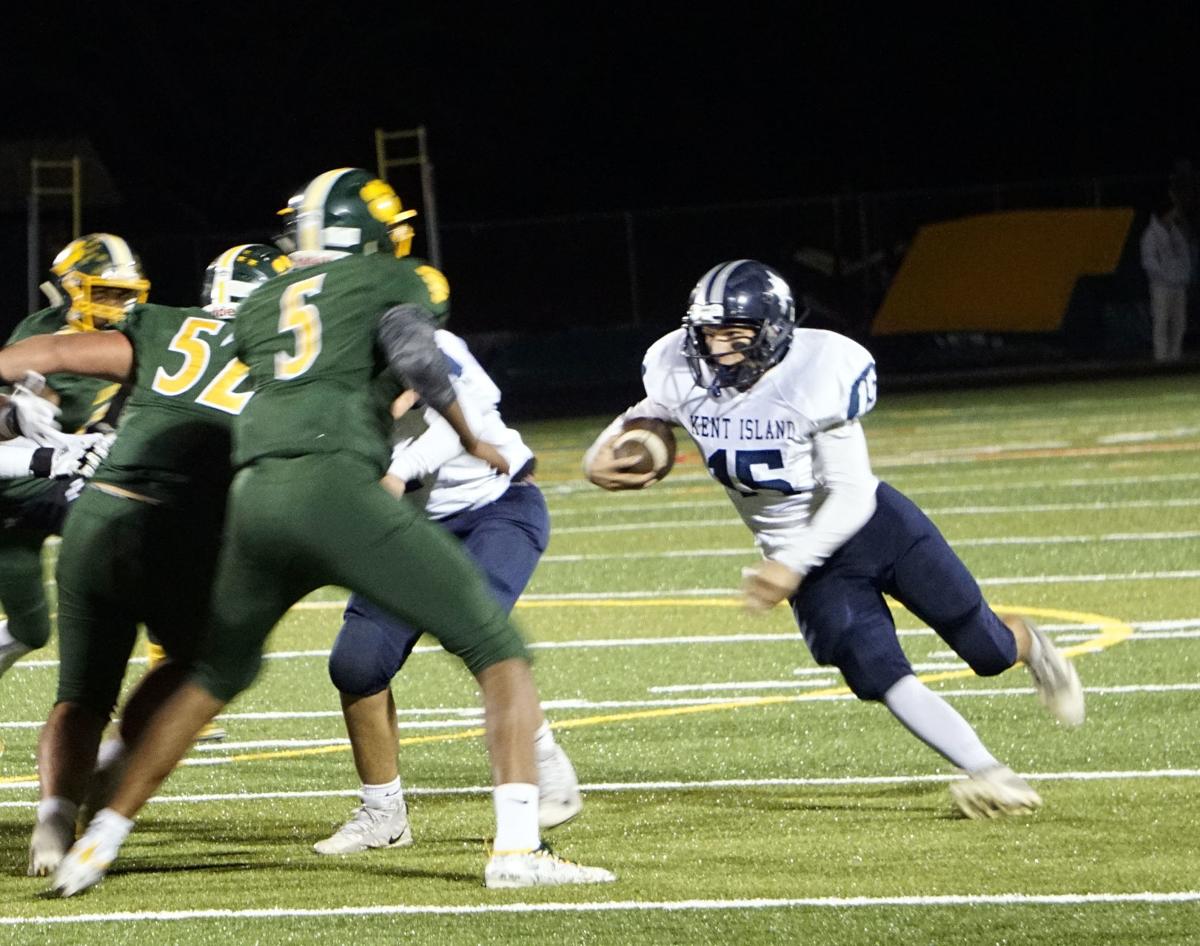 Members of the Kent Island High football team pose with the Superintendent’s Cup after Friday’s 36-0 win over Queen Anne’s County.

Members of the Kent Island High football team pose with the Superintendent’s Cup after Friday’s 36-0 win over Queen Anne’s County.

The Kent Island High senior was inserted as a change-of-pace quarterback Friday at Queen Anne’s County, and responded in a big way, showing a tantalizing glimpse of the methods the Buccaneers can diversify their offense in the playoffs.

Skeans ran for a 40-yard touchdown out of the pistol, passed to classmate Connor Antonelli for a 32-yard score, and Kent Island snapped a two-game losing streak to cap the regular season with a 36-0 shutout of the rival Lions.

“Every week, we get ready for it,” said Skeans, who finished with 100 yards rushing on 10 carries and passed for another 39. “I had snaps all week, I was comfortable, I felt good.

“I’m just going to be honest — all week, I get prepared, our scout defenses do a great job giving us a good look, so I felt comfortable, felt nothing different, trusted my gut, and gave it to my receiver, and he did the rest” Skeans added of the passing TD to Antonelli.

The Bucs (6-3) will likely face undefeated North Caroline (9-0) in the Class 2A East Region playoffs next Friday in Ridgely, the seven versus two matchup a redux of the exciting, 28-21 win registered by the Bulldogs in Week 8.

“I don’t want to say ‘Should have won,’ but we definitely could have won,” Bucs head coach Damian Ferragamo said of the near-miss against North Caroline. “They are a good football team, same with the week before with Parkside, we could have won, but we didn’t. We had the opportunity, and didn’t take advantage of it.

“We knew we had a good opportunity today,” Ferragamo added. “We were on a losing streak. People are celebrating the playoffs, but we were on a two-game losing streak, so we needed get that taste out of our mouth and get back to winning football.”

“We went through some adversity before the season even started,” Lions head coach Donny Graef said. “As the season went on, we lost Zach Brown first day of practice, he was competing for the quarterback spot, and tonight there were 12 kids not playing, so, it’s been tough.

“It’s been a learning experience,” added Graef, who will graduate 19 seniors. “We’ll all be better because of it, and, you know, it’s just the way it is. They fought through adversity. You lose a few games, and it’s easy to pack it in, but this group stuck with it.”

“Hopefully we’ll be back on the upswing, and get us going in the right direction,” Graef said.

It was a sobering reminder of the down cycle the Lions are experiencing, which has also taken a toll on one of the greatest sports rivalries in Eastern Shore history. Fewer fans have shown up every year during the Buccaneers’ three-game, head-to-head run, as the victories have produced a scoring differential of 112-23 in Kent Island’s favor.

The Queen Anne’s side of the bleachers were at 75 percent capacity, including a big student section. The Bucs’ fans packed Lions Stadium well, but a far cry from years past when standing room along the fence next to the track was all that was left.

Senior Isaiah Shockley starred on both sides of the ball for Kent Island, amassing 51 yards from scrimmage on only seven touches, including touchdown runs of 1 and 13 yards. Shockley also stuffed Queen Anne’s quarterback SyRus McGowan on a third-down play on the Kent Island 1, and the next snap, a run attempt on fourth down by Lions senior Gavin Jens was blown up quickly.

Jens reversed course and kept fighting for yardage, but kept getting pushed back further. By the time the referees blew the whistle to signal the play dead, Jens had lost 29 yards, as the referees explained that since he kept struggling, and getting loose, the play had to go on.

It turned out to be microcosm of the evening, and the only real threat the Lions made to score. Kent Island senior Anthony D’Angelo, a transfer from Queen Anne’s, has had the rare chance to be on both sides of the line of scrimmage, and also made a huge sack of McGowan for 10 yards that deflated a good starting point for the Lions.

“First snap on the ball was a little odd, getting used to it, but once I got the first-snap jitters out, it was just another football game,” D’Angelo said. “I just played my heart out, and my team, we just played a phenomenal game.

“We had to keep the stupid plays on the low, don’t do anything irrational,” D’Angelo added of not letting the rivalry get into his team’s heads. “We have next week to play for, and anybody gets stupid penalties, unnecessary penalties, we could potentially not play next week. We just played smart out there.”

The Bucs’ defense yielded only 92 yards total offense on 30 plays, a total dented by eight attempts that resulted in 1 yard or less.

“Our defense just played a phenomenal game,” D’Angelo said. “We had so many guys flying to the ball with that Kent Island defense, gang-tackling, it was the way we play on defense.

“We played hard, we played clean, and that’s what won us the football game,” D’Angelo added.

A 1-yard Shockley TD was the first quarter’s only score, but the Bucs blew it open in the second period.

Skeans, who subbed for sophomore Matthew Burnside under center after Burnside played a bit in the first half, broke loose for a 40-yard keeper out of the pistol formation with 7 minutes, 38 seconds left to play before halftime, and Shockley capped another drive with a 13-yard scamper.

The Bucs picked up the ensuing kickoff on an onside attempt, and two plays later Skeans found Antonelli for the 32-yard grab over the Lions’ defense. Kent Island led 29-0 at halftime, and triggered the running clock when senior Kenny Guyton squeezed in from a yard out with 20 seconds left in the third.

An excellent return by sophomore Jordan Johnston set up Queen Anne’s on the Bucs’ 16 after the next kickoff, and an 8-yard Johnston run bought a new set of downs on the 6. McGowan went for 5 on the next play, and then was stopped short of goal on two successive carries, including the one-and-one stonewalling by Shockley on third down. Jens’ 29-yard loss followed, and the sides ran out the rest of the clock with no further scoring.

“The ceiling is high, man. We’ve got confidence, we know we can play with any team losing to Parkside and North Caroline by one touchdown,” Skeans said. “Those were hard games, but we got them, we want this. We look good, and we’re going to be ready for them.”