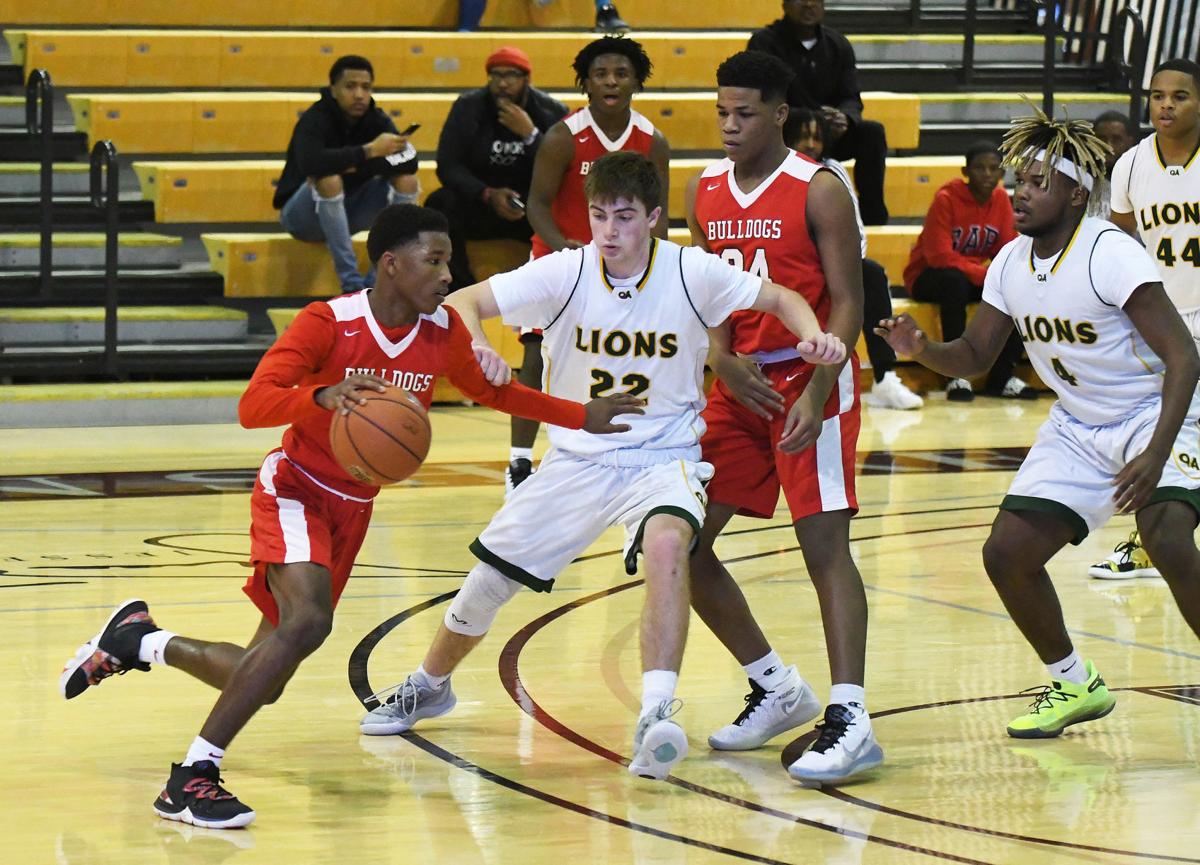 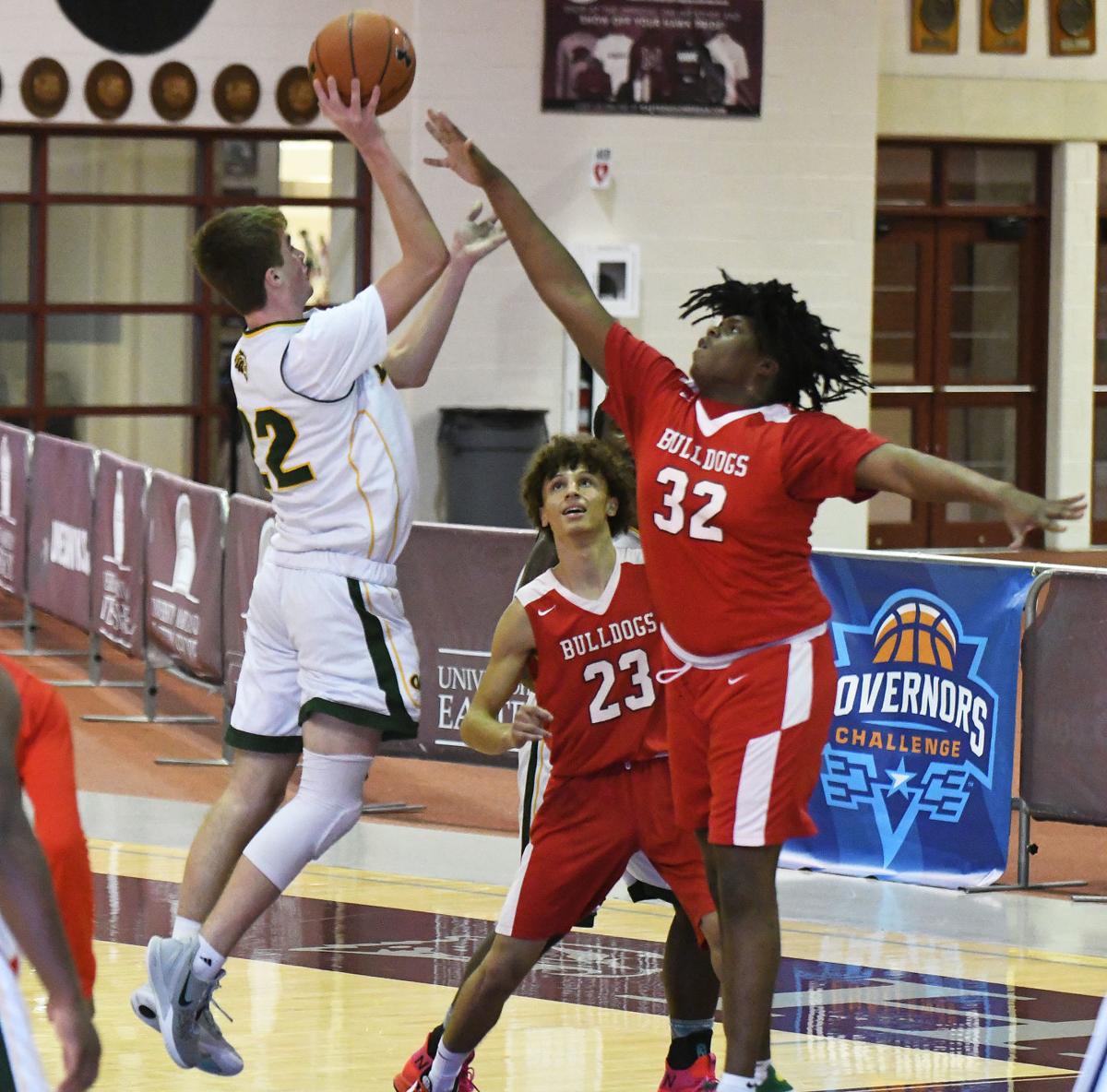 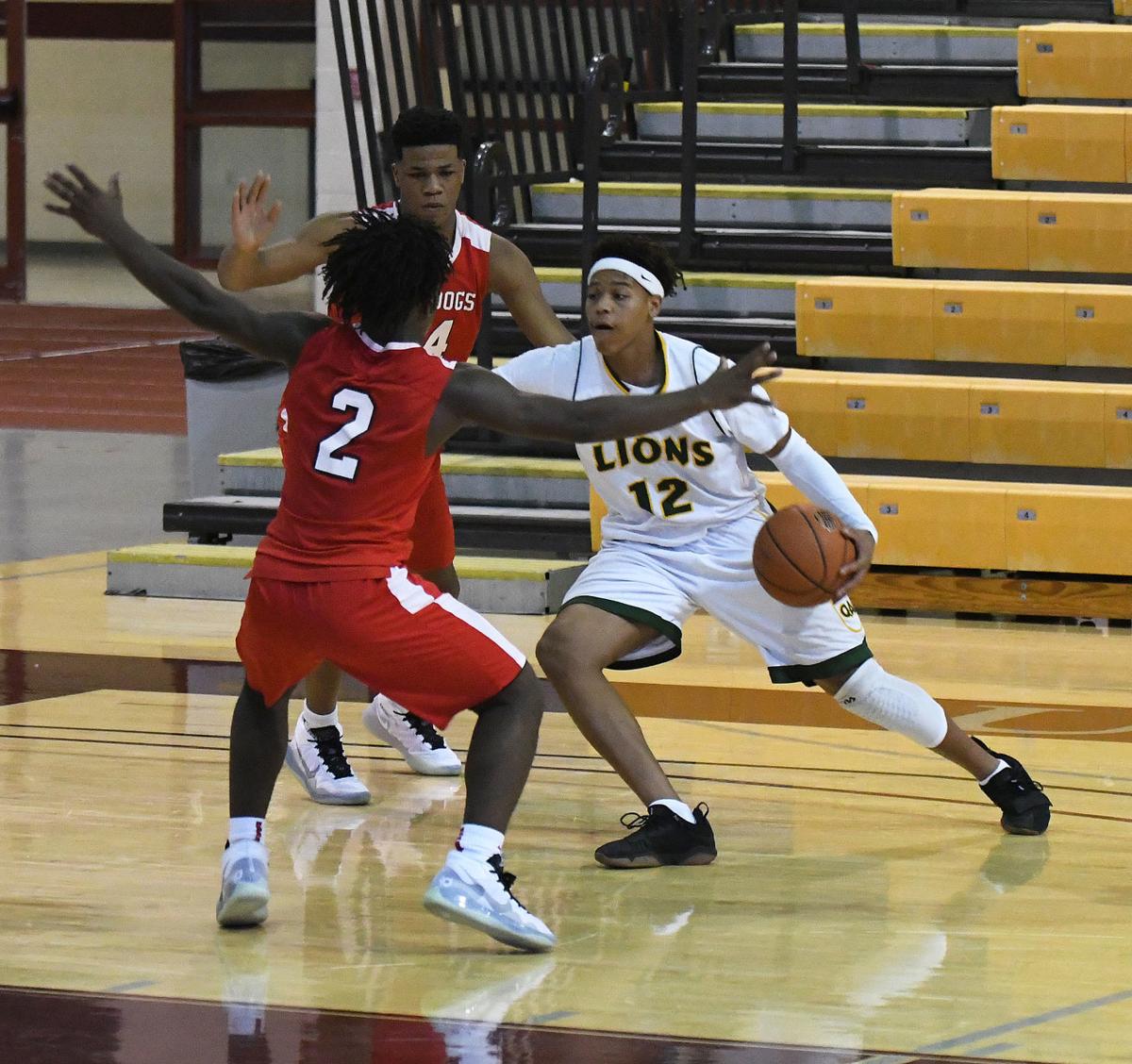 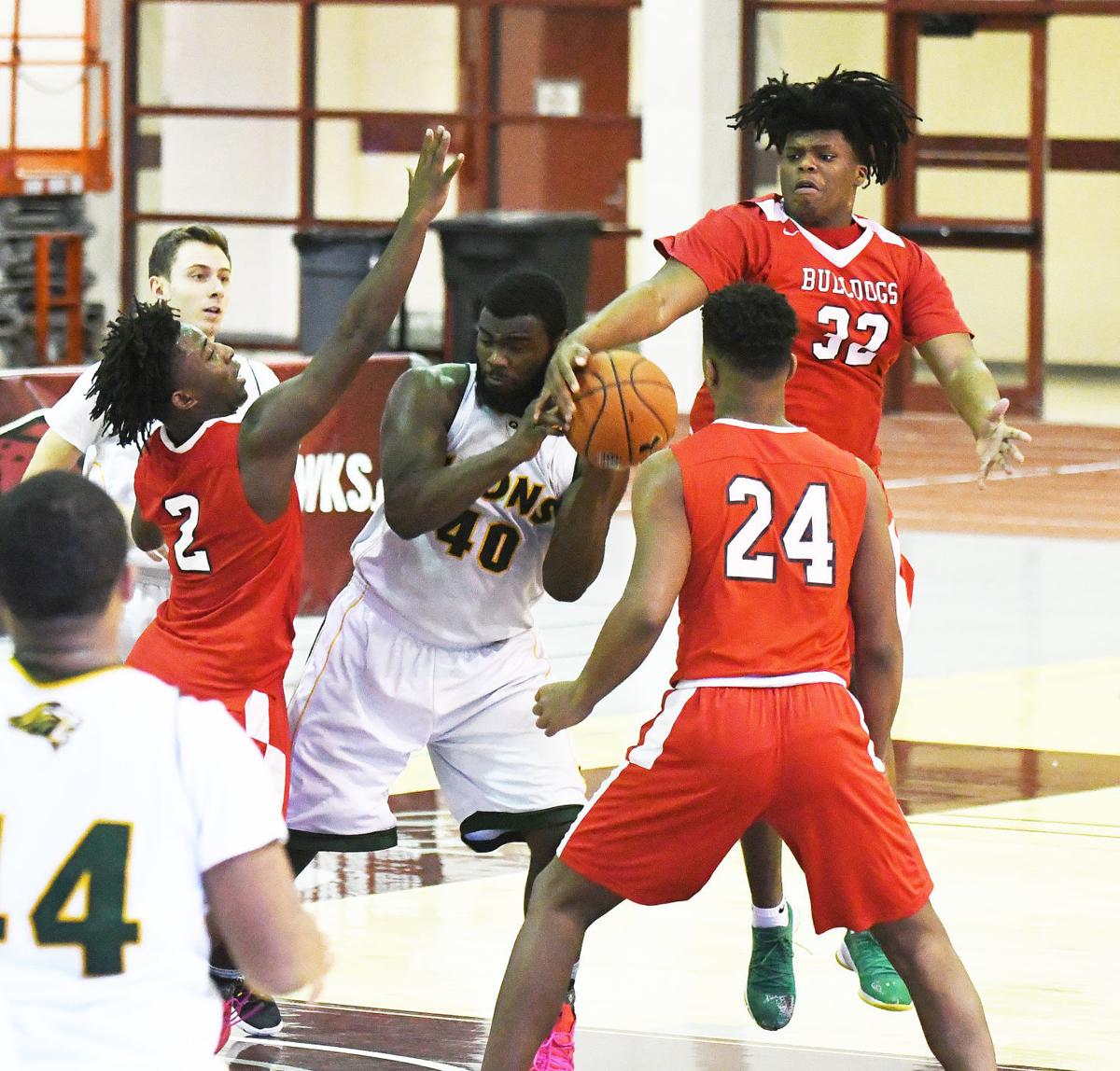 A rebound by Queen Anne’s County High’s Jordan Dozier (40) is contested by Laurel’s Nifere Griffin (32) during the third quarter Friday evening at the University of Maryland Eastern Shore. 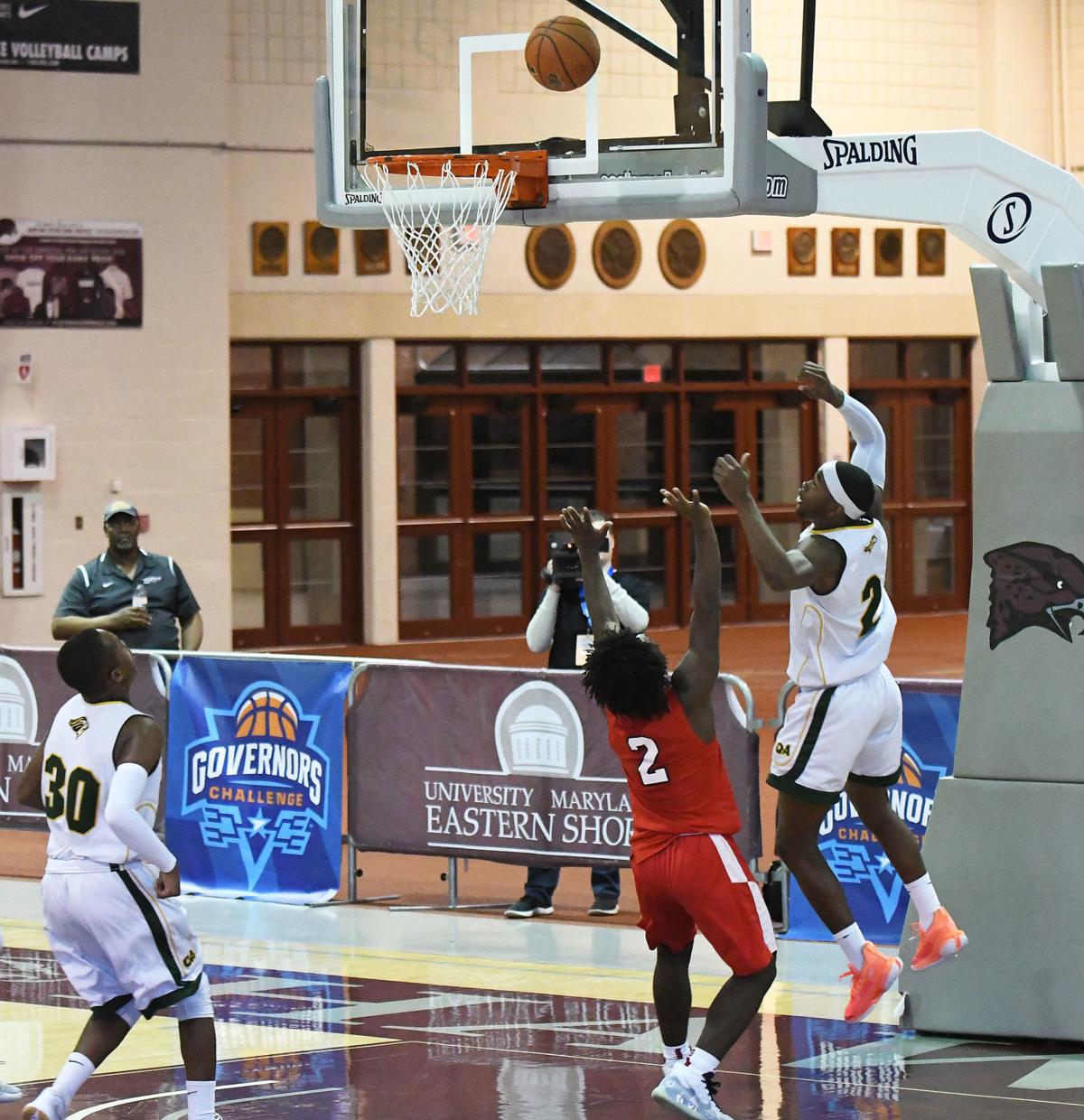 A rebound by Queen Anne’s County High’s Jordan Dozier (40) is contested by Laurel’s Nifere Griffin (32) during the third quarter Friday evening at the University of Maryland Eastern Shore.

PRINCESS ANNE — A little knowledge can make a big difference.

Taking advantage of an opportunity to scout Queen Anne’s in the opening round of the Governors Challenge early Thursday afternoon, the Bulldogs tried something they hadn’t done before on Friday evening — the result was instant success.

Shutting down the Lions’ top offensive weapons with a triangle-and-two defense, Laurel High’s boys’ basketball team completely dominated the first quarter, building a 20-2 lead, on its way to a 75-56 victory in the holiday tournament’s Bracket 5 championship game at the University of Maryland Eastern Shore.

“The coaches and I saw them play yesterday when they played Ron Brown academy,” said Bulldogs head coach Kevin Walmsley. “That was a back-and-forth game. We knew 22 (Hugh Meehan), not sure of his name, the white kid, that he could shoot, and 14 (Devrin Turner) the point guard. We kind of ran a triangle-and-two. We had never done that all year actually. I’m giving away some locker-room secrets, but we put our best two defenders on those two guys and it worked.”

The Lions didn’t see Laurel play and weren’t aware of the shooting skills of Javier White. The Bulldogs’ sophomore guard hit 12 of 14 two-point shots and 4 of 6 three-pointers in a 29-point performance in the championship game. His worst shooting came from the free-throw line, where he was 1 for 5.

The Lions rebounded from their miserable first quarter by outscoring Laurel 15-9 in the second, but could get no closer than within eight points (22-14 and 37-29) the rest of the game.

Laurel scored 28 points off of turnovers. The Bulldogs’ largest lead was 28 points with 6:59 left in the fourth quarter.

Turner scored 16 points to lead the Lions on offense while Meehan netted 14 and Xavior Jones 13. Queen Anne’s did win the battle on the boards, collecting 29 compared to 26 for the Bulldogs, with Meehan grabbing a team-high seven.

White drained a 3-pointer from the right side of the court to open the game’s scoring with 6 minutes, 45 seconds on the clock in the first quarter. Queen Anne’s countered quickly with Turner scoring with a fast-break layup to make it 3-2 at 6:39, but the Lions didn’t score again until six seconds were left in the quarter.

White canned another trey, just before the shot-clock buzzer, to put the Bulldogs ahead 6-2. After a missed shot by the Lions, Dontarius Jones scored on a fast-break. Seconds later, Wilson grabbed a defensive rebound, was fouled on a layup attempt, and hit a free throw to make it 9-2. White scored easily off an inbounds pass for an 11-2 lead.

Wilson hit a jumper after an offensive rebound to make it 13-2 with 4:20 left in the quarter. He drove the lane and dished to Nifere Griffin for a lay-in at 3:10. Griffin added a free throw at 1:43, Wilson tallied on a fast-break at 1:18, and White scored off a pass from Wilson at 1:00 for a 20-2 lead. SyRus McGowan gave the Lions a little life in the final seconds, converting a Laurel turnover into a layup to cut the Bulldogs’ lead to 20-4 at the quarter’s end.

“They jumped on us. We had a lot of turnovers,” said Hollis. “The kids still fought. We dug ourselves way too big a hole.”

The quick start by the Bulldogs, and White’s hot shooting, was too much to overcome.

“I take that blame because I didn’t give them a good scouting report,” said Hollis. “It was my fault. … I didn’t realize they had a good shooter like that on the team.”

Holiday tournament results don’t count towards the overall schedule in Maryland, so the Lions (5-0 overall, 4-0 North Bayside) will still be technically unbeaten when they return to the court on Tuesday, Jan. 7, against North Caroline.

The tournament gave the Lions some experience playing at larger venues and gave them some hints on skills to improve upon.