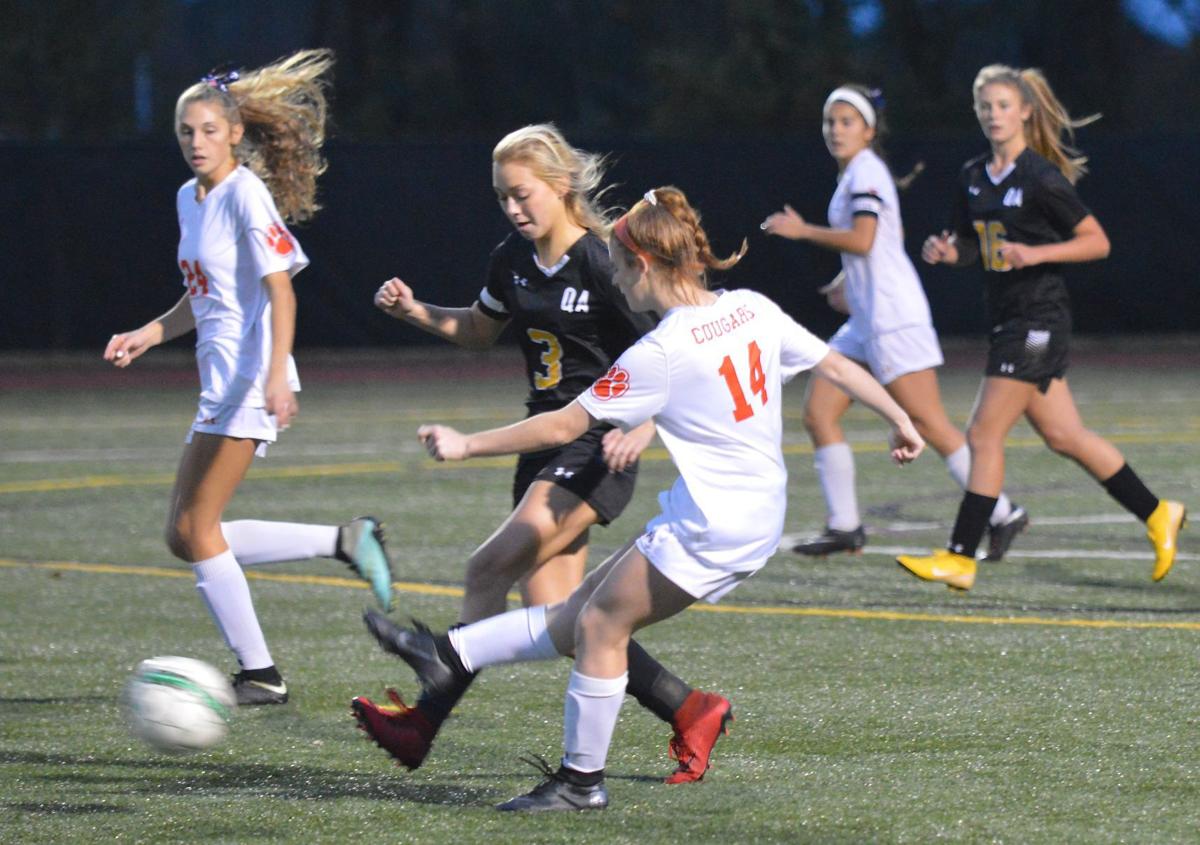 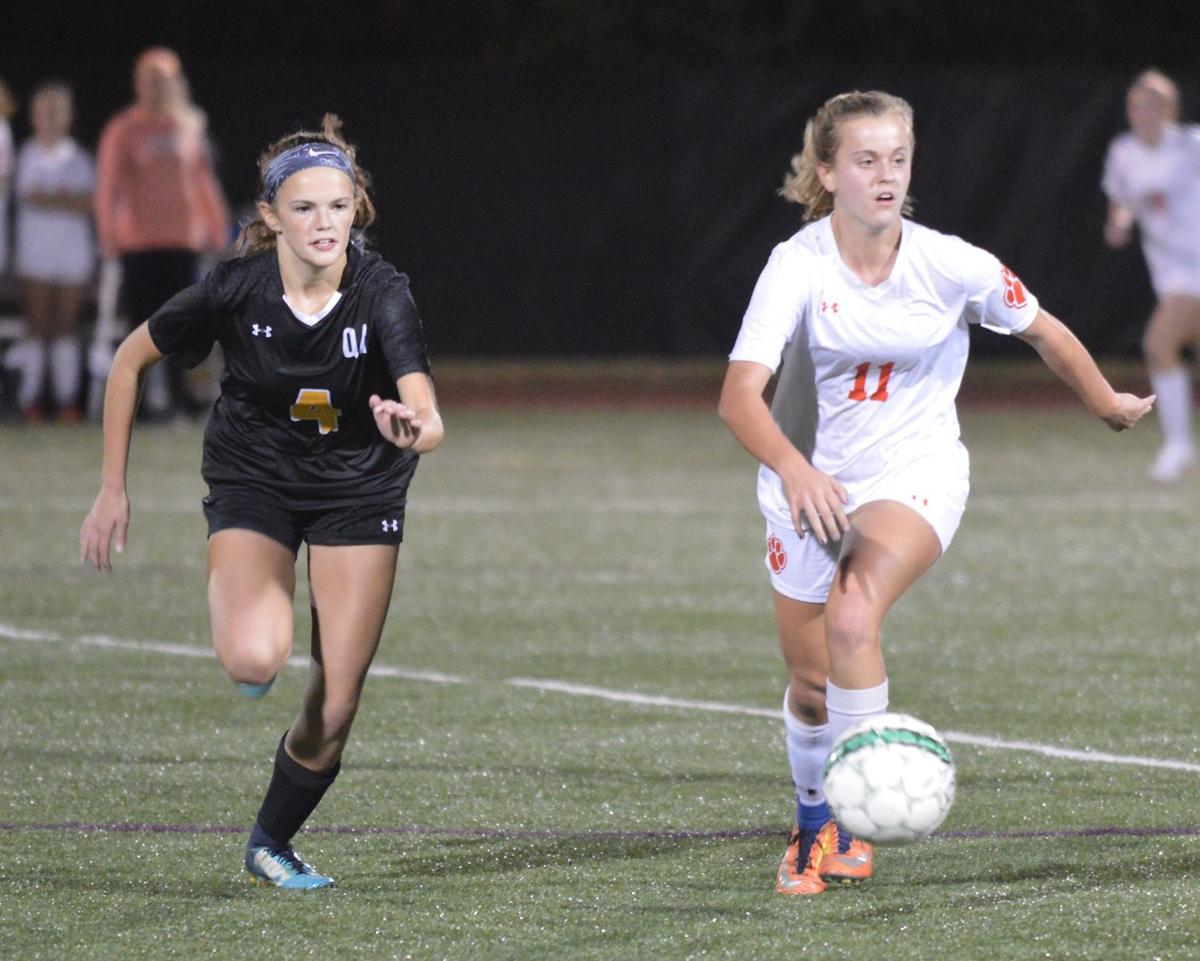 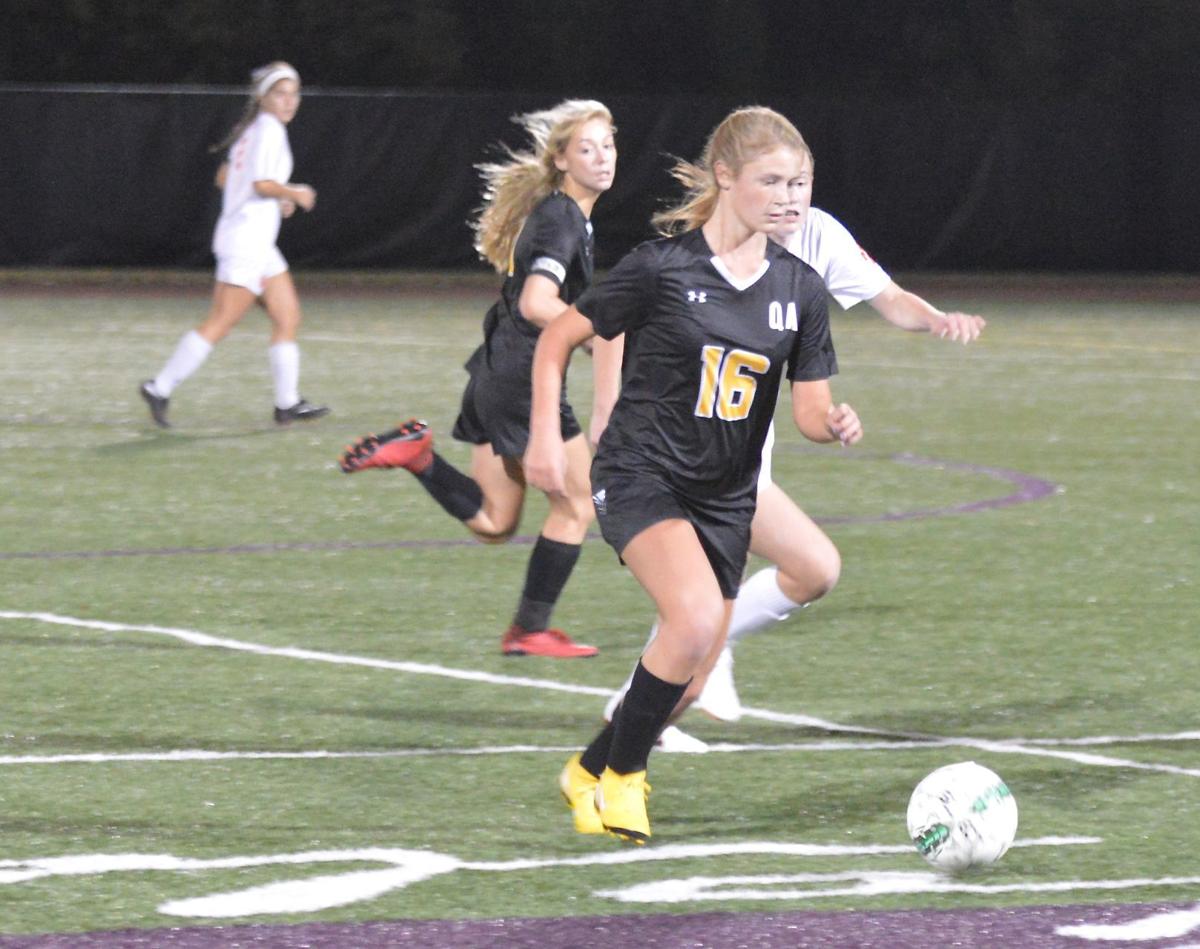 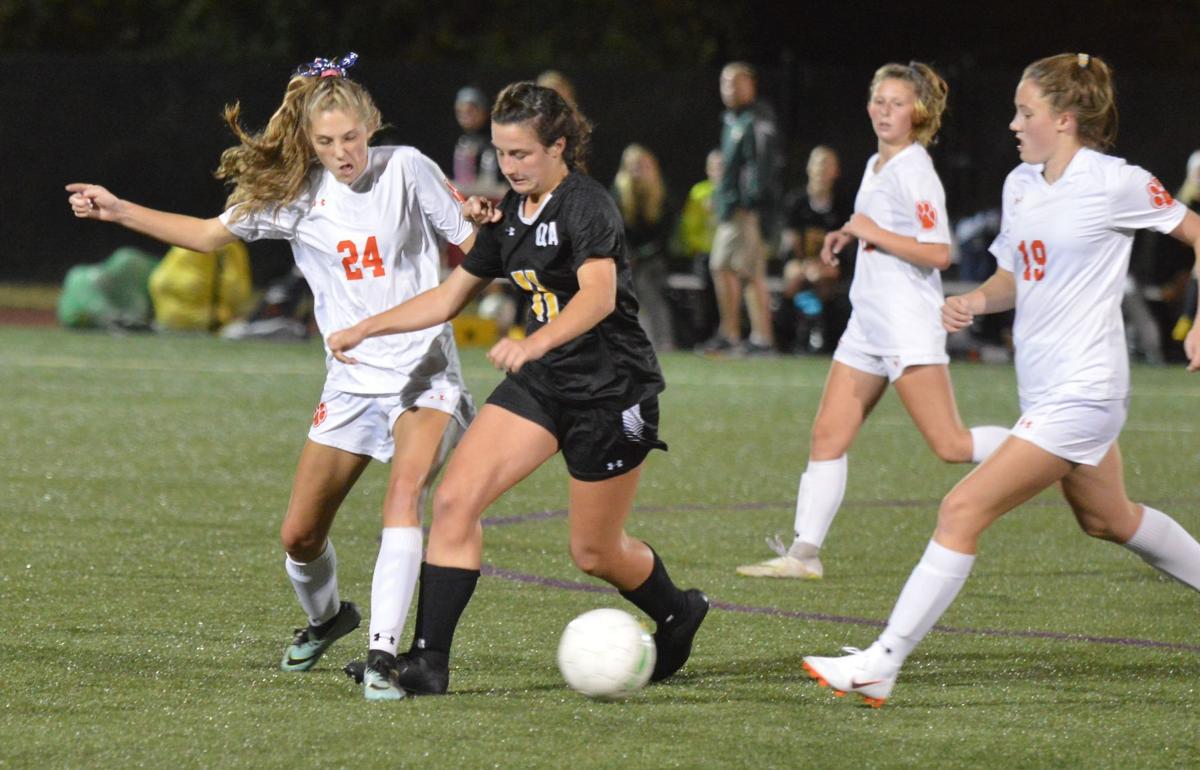 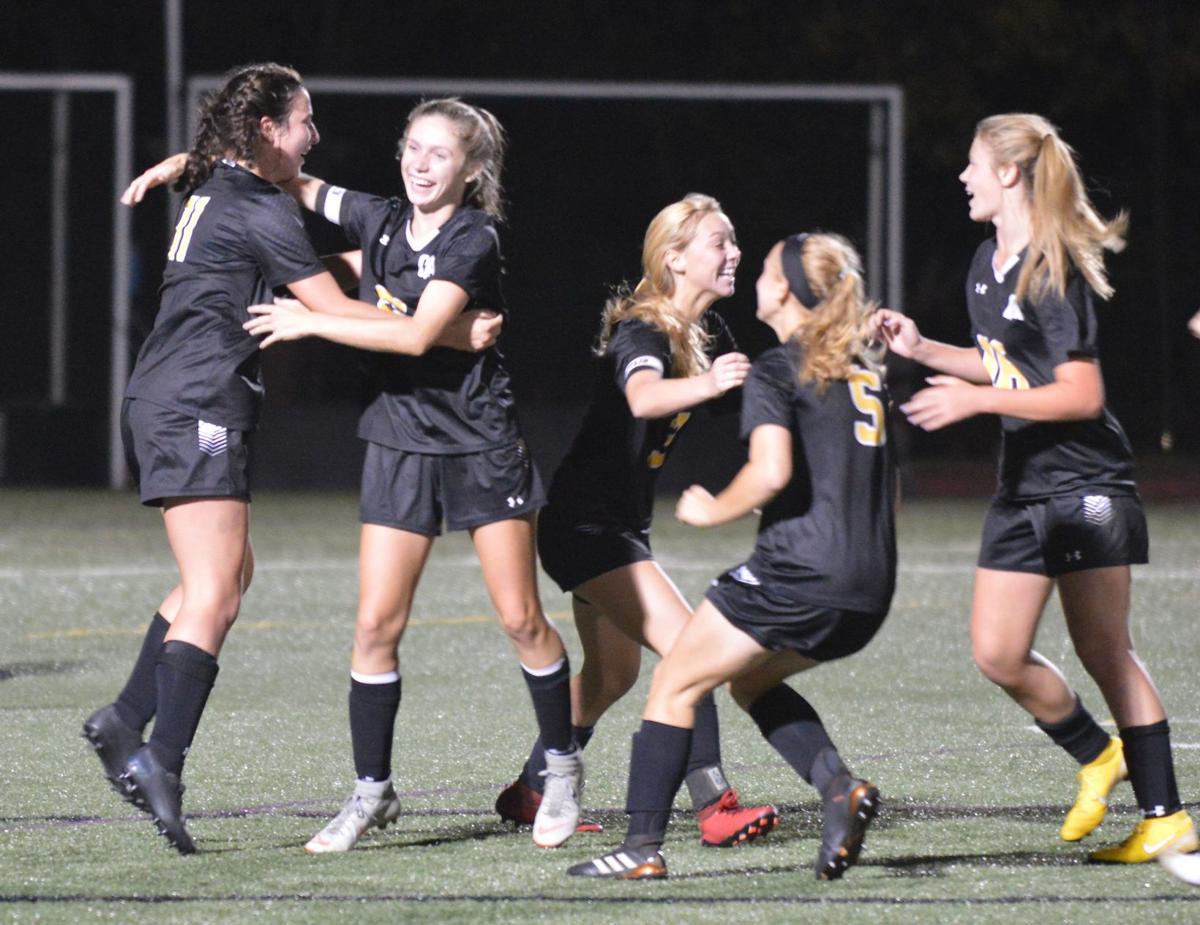 Working the right wing, they sent a centering pass into the goal area 30 seconds into the 10-minute overtime, which was successfully defended by Queen Anne’s County. Thirty seconds after that, they earned a corner kick at the right arc, also defended by the Lions.

With 7 minutes, 19 seconds remaining, freshman Gabby Boyd sent the ball into the goal area again from the right wing. This time sophomore Kayla Streett unloaded on the ball, sending it high into the right side of the net, and Fallston High’s girls’ soccer team celebrated its fifth straight Class 2A East Region championship with a 3-2 victory.

Kennedy Mendoza and Macey Bogdan also scored in Fallston’s win. It was the Cougars third straight win over Queen Anne’s in the region final.

“It was a great game. It was probably the best game we’ve played all season, building a lead like that,” Cougars head coach Carlie Chatterton said. “Queen Anne’s is a team of momentum so they were able to come back. I knew our girls had the heart to finish it. They know this road isn’t easy. We’ve been down it five times in a row now.”

“I give Fallston a lot of credit. They’re a very good team,” Lions head coach Mike Kern said. “I’m very proud of our girls for the fight, the grit they gave today. They worked hard. To go down two goals and to come back like we did. I think we dominated the last 25, 30 minutes of the second half. We possessed it well and won the 50-50 balls and kept the ball short, which is a key for us, something we didn’t do well the first half.”

Fallston (12-5-1) advances to the state semifinals Saturday at River Hill High School. The Cougars will face the West Region champion, either Oakdale or Walkersville.

With back-and-forth action throughout the game, Fallston held a slight edge in possession time and took a 1-0 lead in the first half on Mendoza’s goal. Bodgan tallied with 23:58 remaining in the second half for a 2-0 led, but the Lions controlled play during the remainder of regulation to rally for a 2-2 tie.

Kiwi Weddell scored on a penalty kick with 18:56 to go in regulation and Abby Blanchard tallied off an assist from Riley Napier with 4:16 remaining.

Mendoza, a freshman with speed and stamina, produced scoring opportunities throughout the first half. She was denied by Queen Anne’s defense and goaltender Breanna Athey except for a close-range shot off a corner kick to open the scoring with 7:23 left in the first half.

After four shots in the first half, Queen Anne’s (12-3) mustered eight more in the second. The Lions did not earn a corner kick.

In the first half, Fallston’s Megan Stambaugh sent a corner kick from the right arc into a large group of attackers and defenders. The the ball bounced free to Mendoza, who banged in a right-footer from five yards out to make it 1-0. Bogdan pushed the ball ahead of defenders, crossing the goal area from left to right, and kicked the ball just inside the far post to make it 2-0.

In the second half, Napier was taken down in the penalty box after a give-and-go with Weddell. Weddell right-footed a roller into the right side of the net on the PK to cut the Cougars lead to 2-1. Blanchard collected a pass from Napier on a break and created space from a defender. Using her as a screen, Blanchard sent the ball just inside the right post to tie the game.

Neither team had another shot the remainder of regulation. The Cougars then pounced in overtime.

“We are famous for overtime games,” Chatterton said. “We had an 11-round shootout with them last year. We went into overtime our last game, and we find ourselves in overtime a lot during the season, so I just tell them this is when it pays off.”