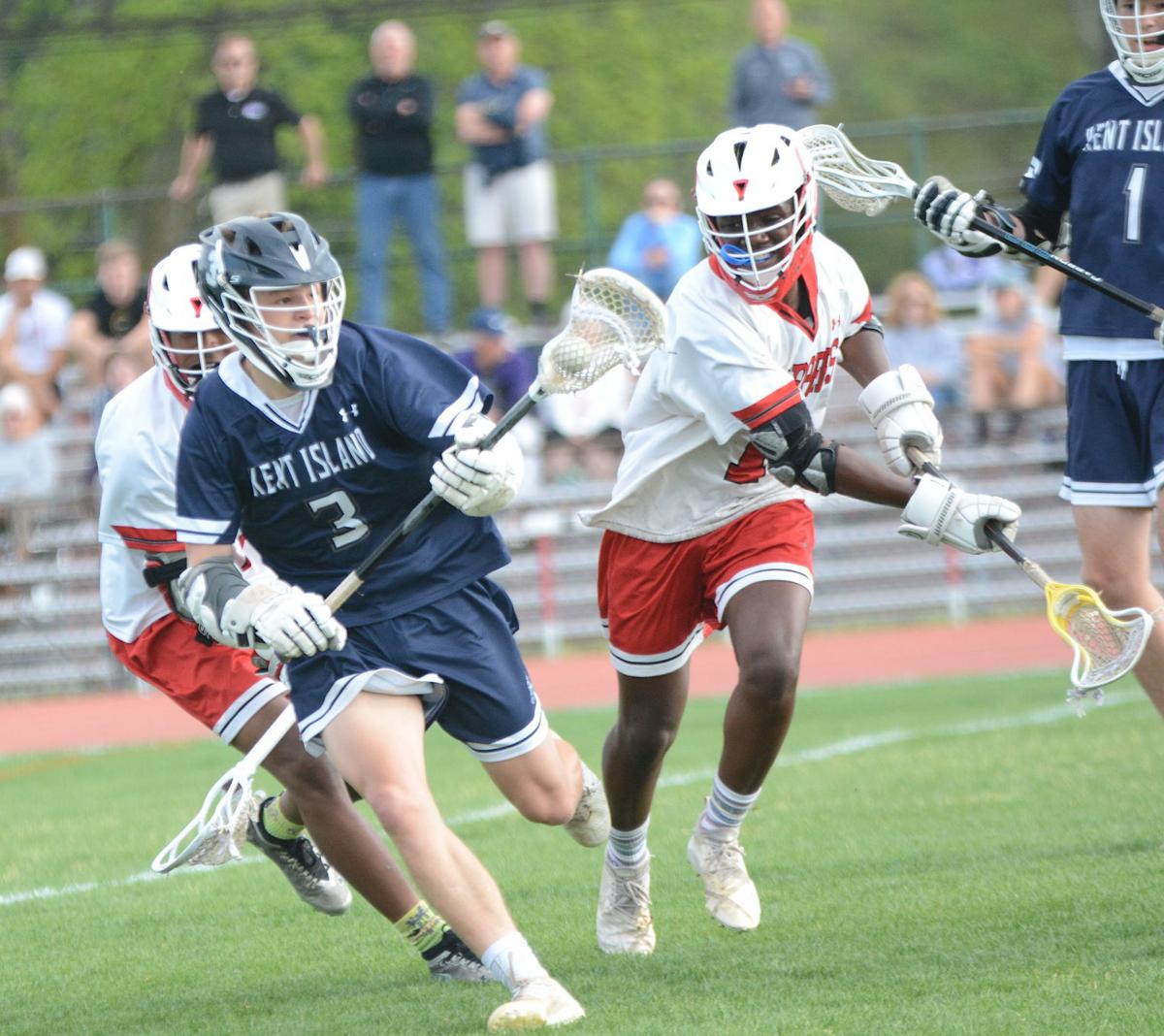 Cole Kratovil (3), who helped Kent Island’s boys’ lacrosse team to the Bayside Conference title a year ago, is headed to Holy Cross. 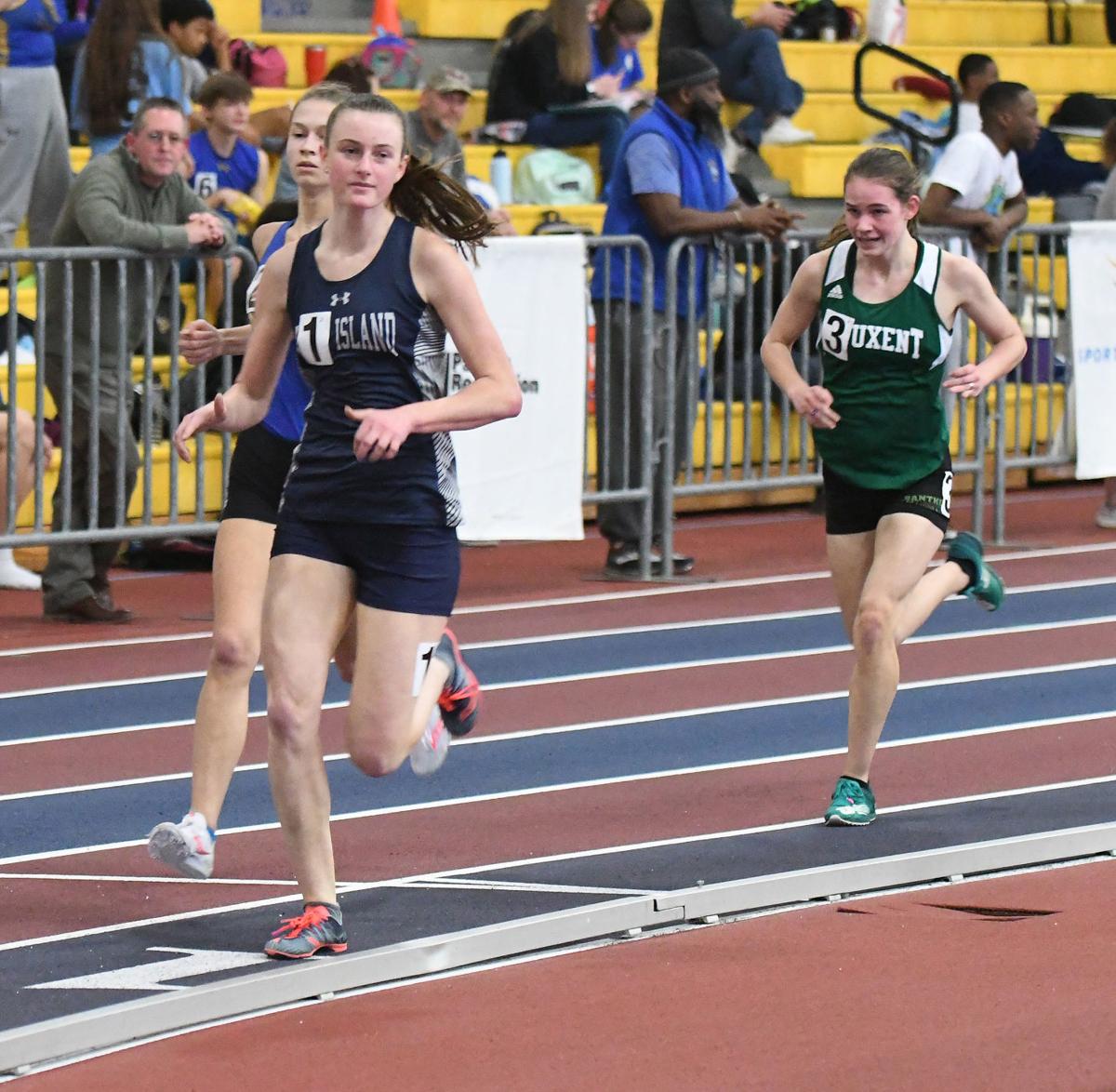 Kent Island’s Charlotte Kratovil-Lavelle, who won the 1,600 meters at this year’s 2A East Region indoor championships, is headed to Dickinson (Pa.) College. 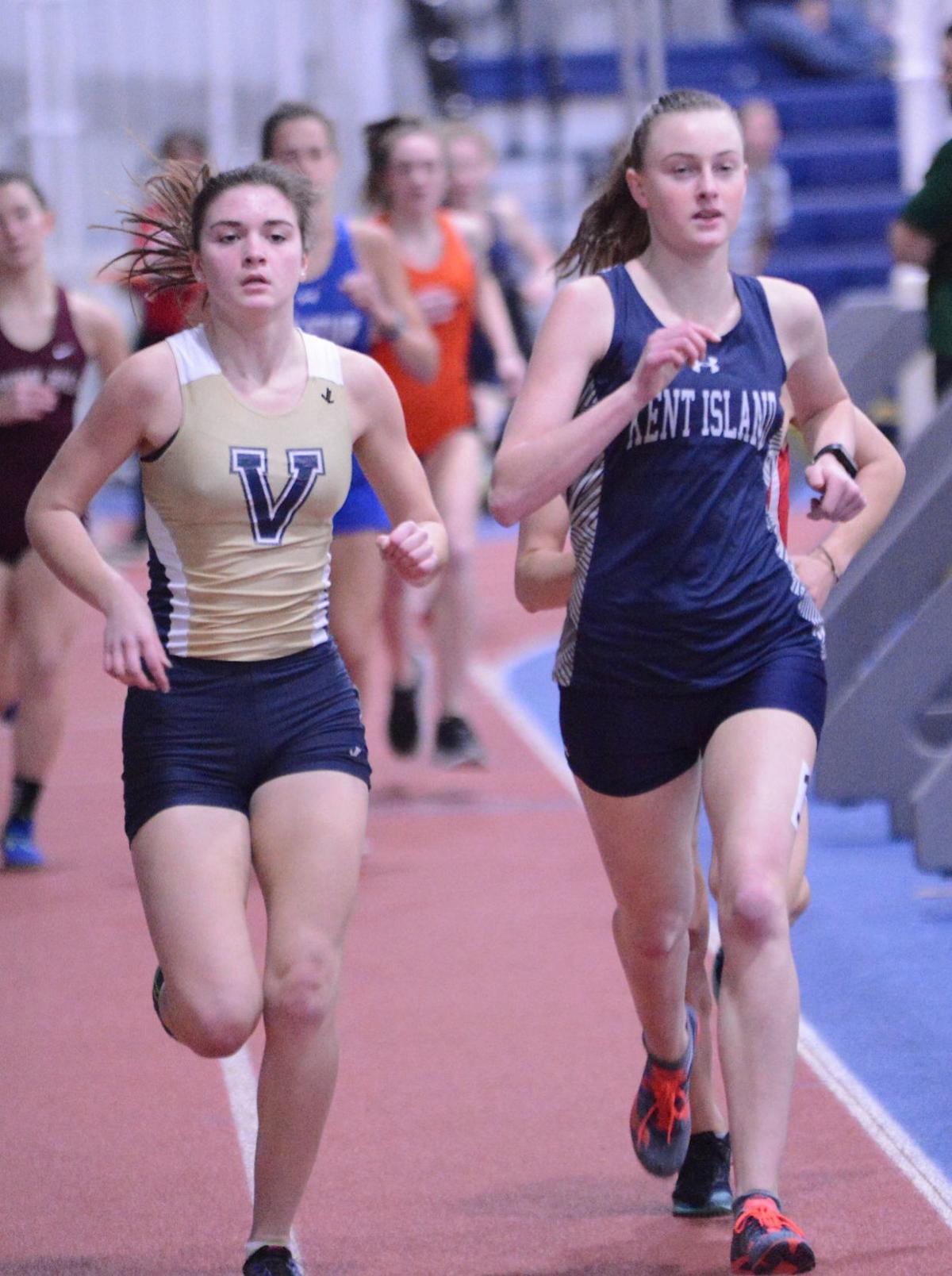 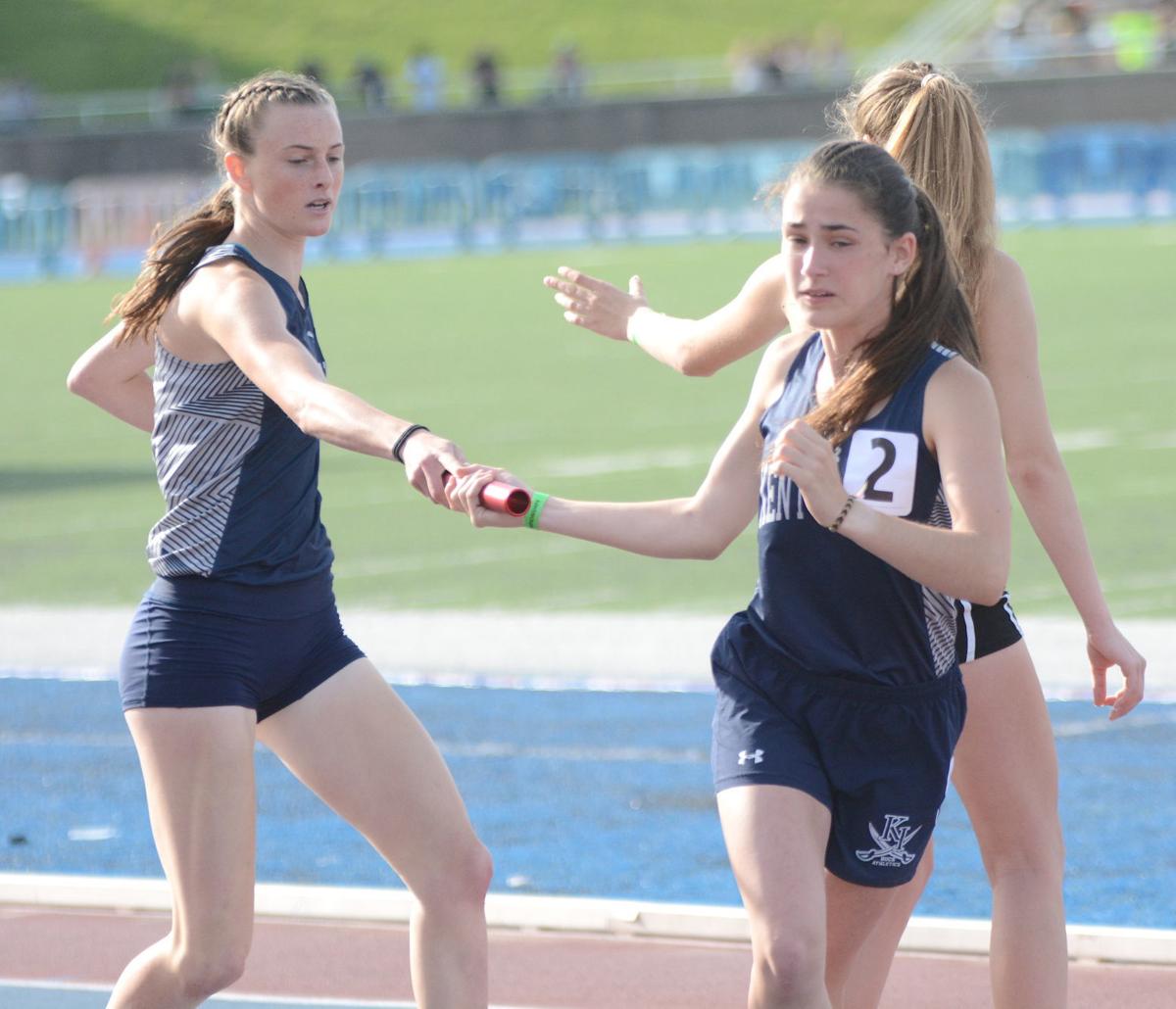 Kent Island’s Charlotte Kratovil-Lavelle, left, hands the baton to Jules Biggam for the second leg of the girls’ 4x800-meter relay at the 2019 Class 2A state track and field championships. Kent Island placed second in 9:38.07. 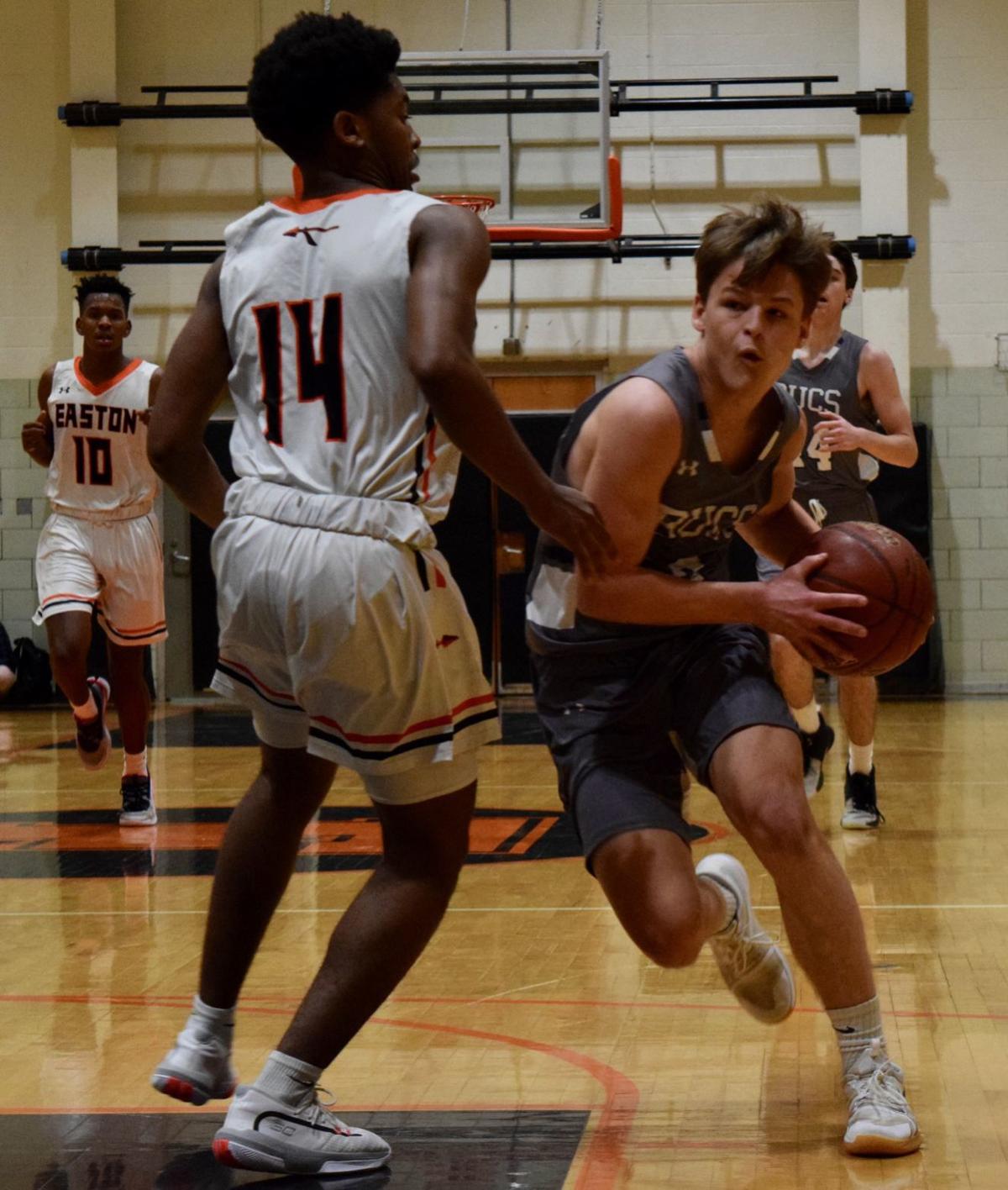 Cole Kratovil (3), who helped Kent Island’s boys’ lacrosse team to the Bayside Conference title a year ago, is headed to Holy Cross.

Kent Island’s Charlotte Kratovil-Lavelle, who won the 1,600 meters at this year’s 2A East Region indoor championships, is headed to Dickinson (Pa.) College.

Kent Island’s Charlotte Kratovil-Lavelle, left, hands the baton to Jules Biggam for the second leg of the girls’ 4x800-meter relay at the 2019 Class 2A state track and field championships. Kent Island placed second in 9:38.07.

STEVENSVILLE — Kent Island High School cousins Cole Kratovil and Charlotte Kratovil-Lavelle, both outstanding student-athletes from the Class of 2020, are headed off to their respective colleges this fall having been awarded academic scholarships.

They are scheduled to perform in their favorite sports in college. Cole will be attending the College of Holy Cross in Worcester, Massachusetts, where he will be on the school’s NCAA Division I lacrosse team in the Patriot League. Charlotte will attend Division III Dickinson College in Carlisle, Pennsylvania, where she will compete in cross country, indoor and outdoor track.

Both student athletes also have longstanding academic honors. Cole and Charlotte each have grade-point averages over 4.2, as they have taken many Advance Placement courses at KIHS, and are ranked among the Top 10 students of their graduating class of 330 seniors. Both are members of the school’s National Honor Society.

Charlotte was named KIHS Senior Scholar-Athlete, Fall 2019. She also received the Bayside Senior Scholar-Athlete Award, 2019-2020. She is the all-time top points producer for KIHS girls’ indoor track. (Had the spring sports season not been canceled this year, she would likely had become all-time top producer in outdoor track. She only needed 35 points to achieve this.)

In her track career, she earn five state medals, including four school records as a member of the school’s 4 X 800-meter relay team, and the school record in the 3,200 meters. In her senior year, Charlotte was the Bayside Conference and Class 2A East Region cross country champion.

“Her first valuable trait, to me, is she’s coachable,” said Justin Holland, Kent Island head track coach for 21 years. “She’ll do anything you ask to help her team win. Besides being a runner, she’s a state-qualifier in the pole vault. She’s very flexible. She sets goals for herself, and she wants to be great.”

Cole was senior year captain for the basketball and lacrosse teams. He was The Star Democrat’s North Bayside Basketball Player of the Year 2019-2020, and also all-Bayside Conference first team. In lacrosse he was first-team all-conference in 2019. He is a four-year varsity player.

His high school coach, Bobby Woolley, who has coached lacrosse for 14 years at KIHS, describes Cole as “an unselfish, great teammate with the eye of a point guard.”

Woolley, who has coached all of the Kratovil boys, said, “All of Kratovils have the same characteristics of being hard working, respectful, and they all come with high expectations for personal performance.”

Cole is following in the footsteps of his older brothers, Frankie and Jackson, who are lacrosse teammates at McDaniel College in Westminster. All three brothers have now earned academic scholarships for college.

When their father, Frank Kratovil Jr. was serving as Queen Anne’s County State’s Attorney in the early 2000s, he was often heard joking about his and the boys’ mother, Kimberly, having four sons between the ages of 7 and 1.

“The first word we teach our children to say when teaching them to talk is scholarship,” Frank Kratovil Jr. said

Cole and Charlotte are the grandchildren of the late honorable Frank Kratovil Sr., who served as Circuit Court Judge in Prince George’s County, and his wife, longtime community activist Lynda Kratovil, who both retired in Stevensville.

As head basketball coach at KIHS over the past several years, Frank Jr. had the privilege of coaching his son Cole. He said, “I only wish my father could have been here to see Cole and Charlotte get these scholarships. He (my father) was their biggest sports fan!”

Charlotte is the daughter of the late Thomas Lavelle and Connie Kratovil-Lavelle.

Her mom said, “Since she was a little girl, I’ve called her my little CEO. She wants to do everything very well. She’s driven, willful and she doesn’t tolerate a lot of nonsense when there’s work to be done. She’s going to be running the country. I think that’s OK for me to say because I’m her mother!”