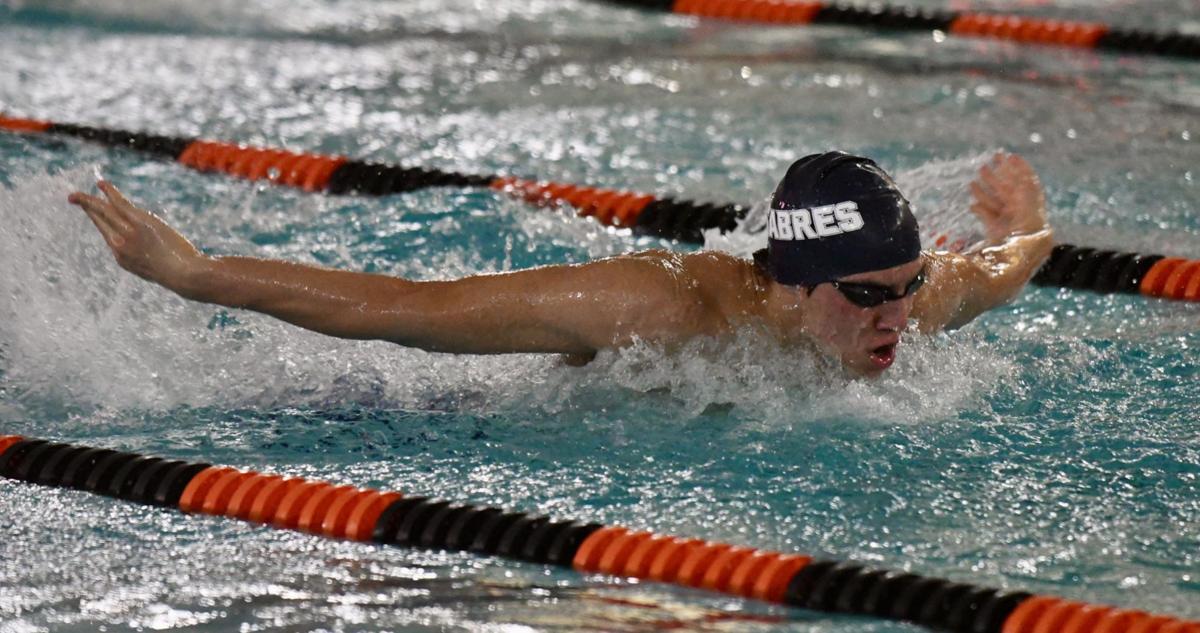 Sts. Peter & Paul High’s Tyler Christianson swims during his winning performance in the 100-yard butterfly Monday evening at the MIAA B Conference Championships at McDonogh School in Owings Mills. 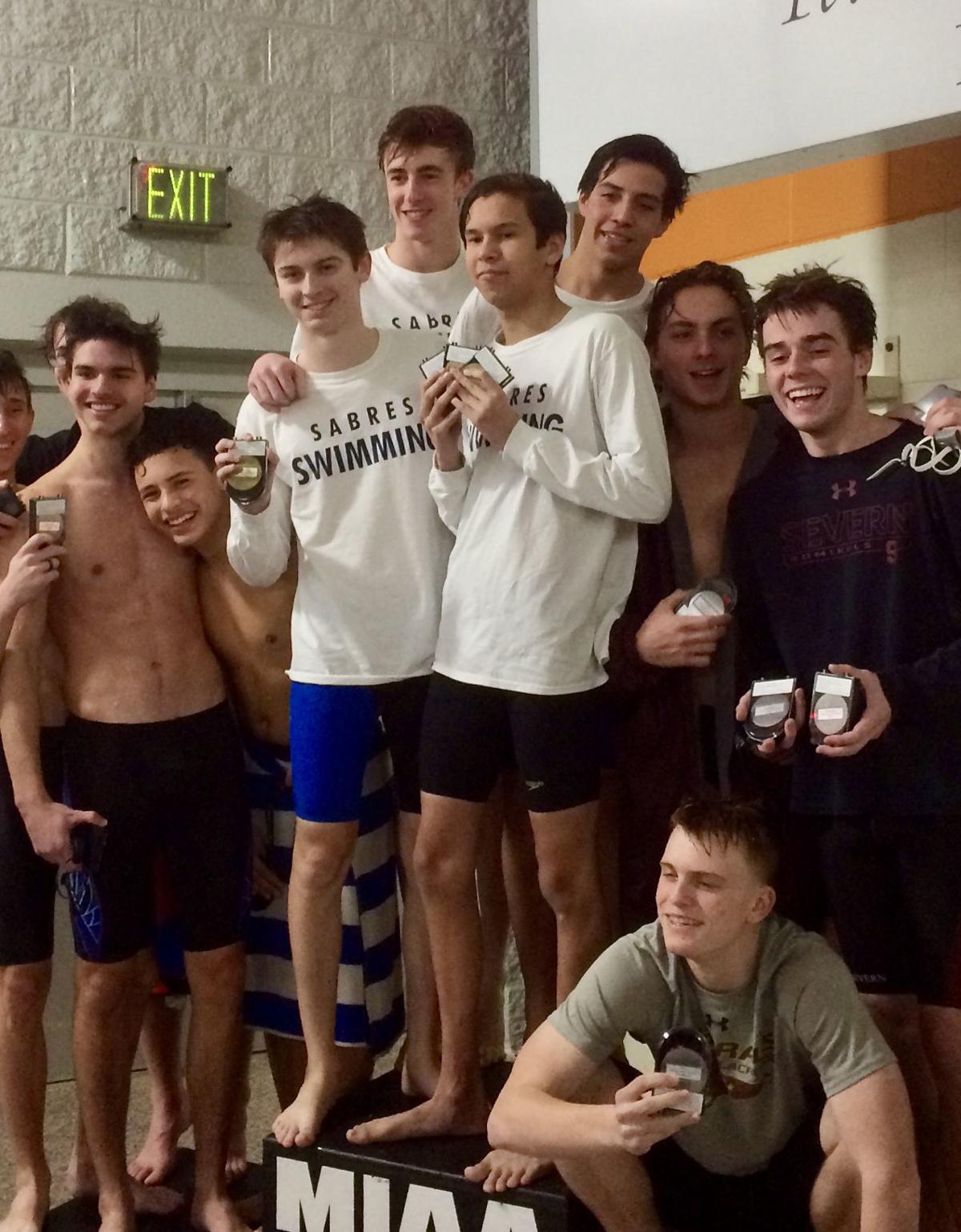 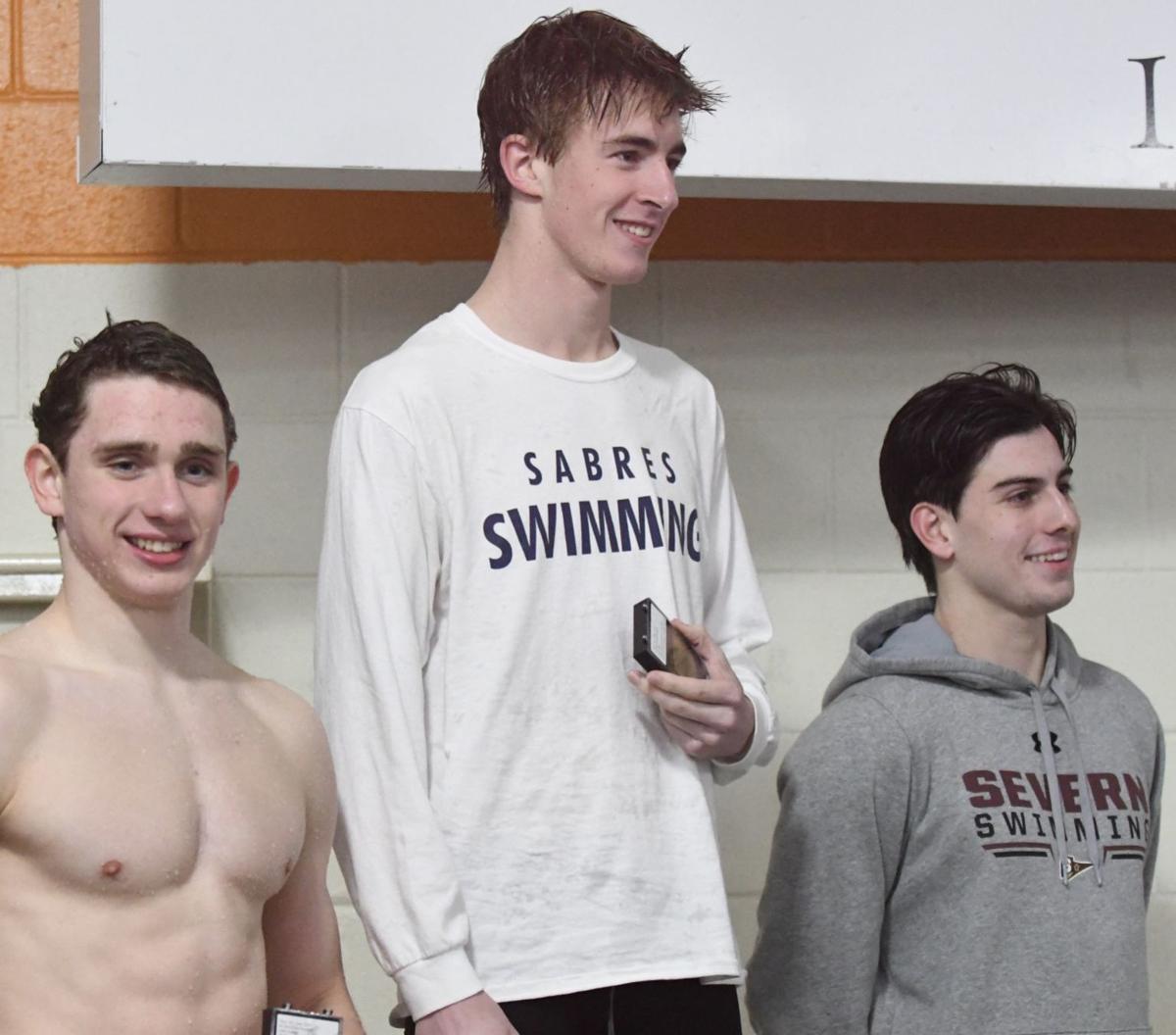 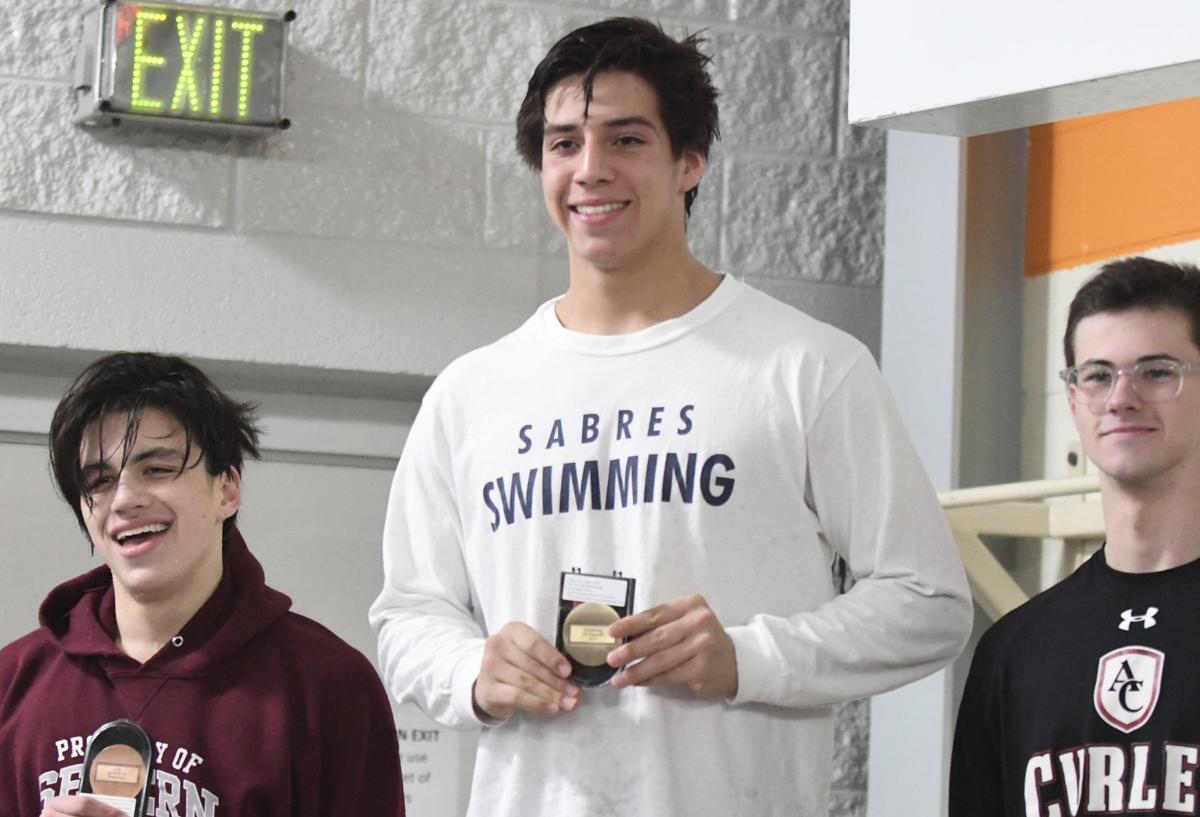 Saints Peter & Paul High’s Tyler Christianson was at the top of the podium after winning the 100-yard butterfly at the MIAA B Conference Championships.

Sts. Peter & Paul High’s Tyler Christianson swims during his winning performance in the 100-yard butterfly Monday evening at the MIAA B Conference Championships at McDonogh School in Owings Mills.

Saints Peter & Paul High’s Tyler Christianson was at the top of the podium after winning the 100-yard butterfly at the MIAA B Conference Championships.

Christianson won the 100-yard butterfly and the 100 backstroke, and Dyer won the 50 freestyle. They also teamed with Evan LaPointe and Kai Parker to win the 200 free relay.

The Sabres finished third in the eight-team competition with 194 points, just two points behind The Key School. With a large team full of YMCA and club swimmers, Severn scored 301 points to win the team title by a large margin.

St. Mary’s, which moved to the A Conference this season, had won the last five B Conference championships.

“Overall, we did really well. I was very happy to see how hard we fought,” Sabres head coach Josh Remaniak said. “It’s bitter sweet since this is the last meet for quite a few swimmers and also for myself. But third place, the team is very happy with it. I know we really wanted to get second but third place is awesome.

“There were quite a few personal bests across the board,” Remaniak added. “We had a few kids that were a little off today, but overall it was mostly personal bests or lifetime bests for quite a few swimmers. Paul had bests in the 50 and 100 free. Kai had bests in the 50 and 100 free. Grayson Kelley had a personal best in the 100 breaststroke. Tyler had a lifetime best in the 100 fly. We had some other kids that just knocked off a quarter second here, a half a second here, so overall it was a good performance by everybody.”

Severn opened the meet by winning the 200 medley relay with a time of 1 minute, 44.34 seconds to pick up 32 team points. SSPP, with Christianson, Parker, Xander Harkowa, and Dyer, took second, just 17 hundredths of a second behind to earn 26 points.

“For the 50, my friend Kai, he was revved up, I was revved up. He said, ‘Paul, just go out there and break your body, and just shred it, and they won’t stand a chance,’” Dyer said. “It was a great race and I’m just so glad that I had people that were just right with me the whole time, and then I touched and just barely beat them.”

A versatile swimmer capable of winning virtually any event, Christianson chose to swim the butterfly and backstroke at this year’s meet. He won both events by a large margin, taking control of the races right from the start. He broke 50 seconds for the first time in the 100 fly with a time of 49.60, well ahead of Archbishop Curley’s Chris Knorr (54.59).

“The butterfly was pretty good. I went a best time of 49.60 and won the race so that was awesome to have,” Christianson said. “That was definitely a goal I was going for. I just really wanted to swim for my team today. We had a really good goal to come in and just swim as hard as we can and see what place we could get.”

Christianson later topped Knorr by more than 10 seconds in the 100 back. With a 25.09 split for the 50, Christianson finished in 50.74 seconds. He said he’d like to break 50 seconds in that event too but was a little tired from swimming in the Sabres’ winning 200 free relay in the previous event. His relay split was 21.31 seconds and the winning time was 1:35.5.

Christianson won the 100 breaststroke and the 200 individual medley at the MIAAs last year. He has signed a National Letter of Intent to continue his academic and swimming career at the University of Notre Dame. He was a 2018 USA Swimming Scholastic All-American. On the international scene, he represented Panama in the Central American & Caribbean Swimming Confederation Championships and the Pan Am games last summer. He competed in the 200 and 400 individual medley and swam to times that qualify for the 2020 U.S. Olympic Trials, June 21-28, in Omaha, Nebraska.