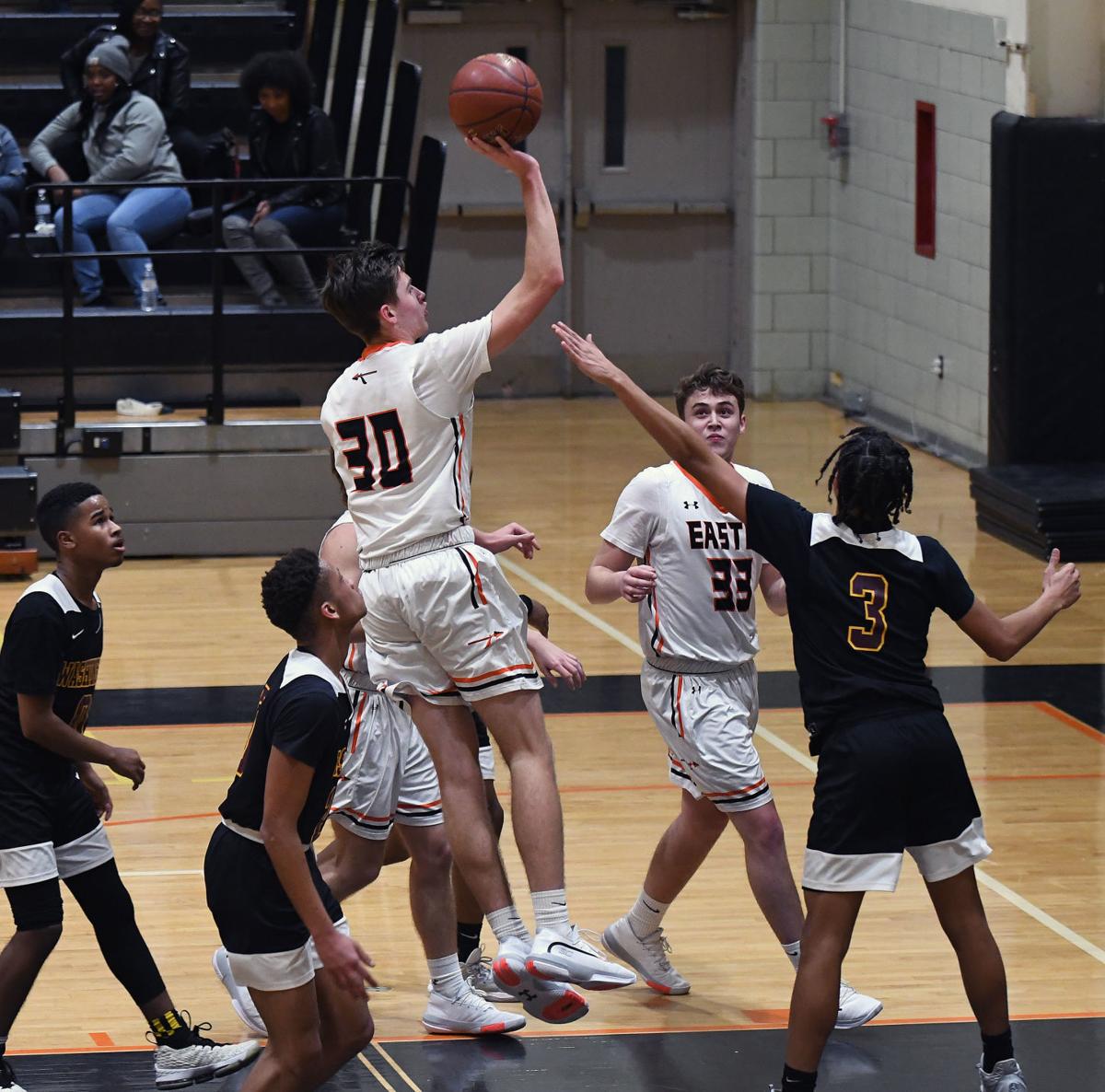 Easton High’s Chris Kaminskas shoots a one-hander in the lane during the second quarter Tuesday evening against Washington. 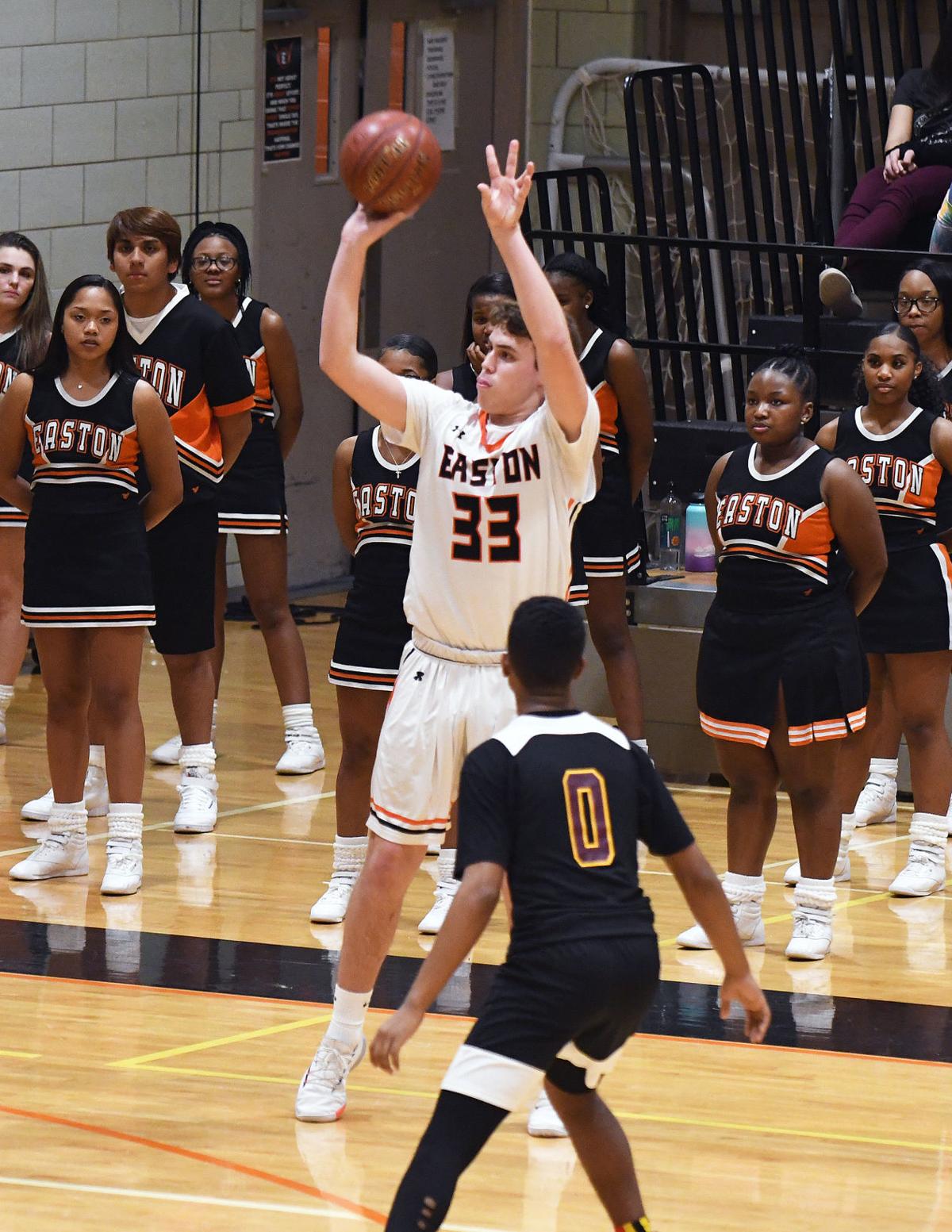 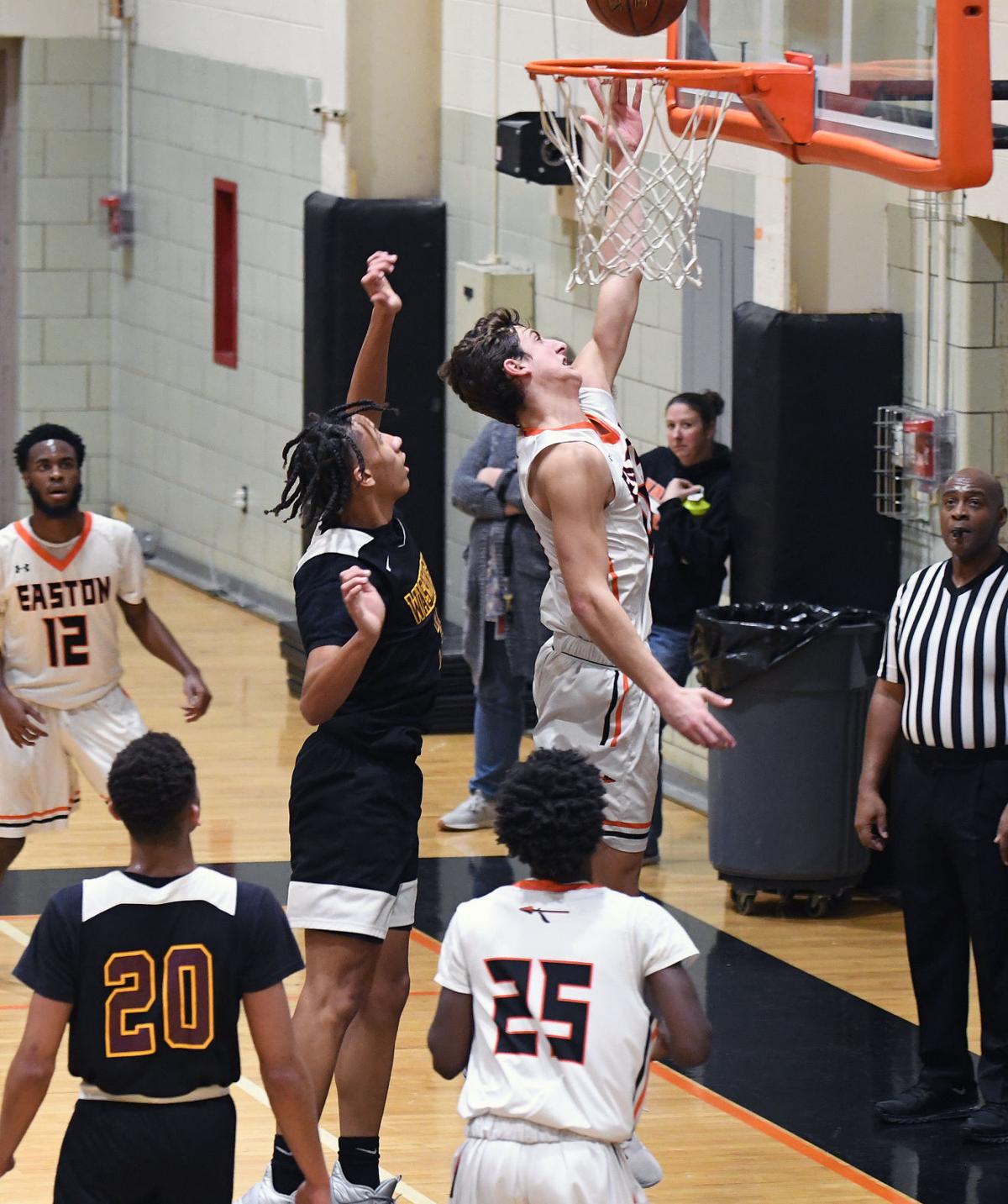 Easton High’s Ryan O’Connor scores with a driving lay-in ahead of Washington’s Alden Horsey during the second quarter Tuesday evening. 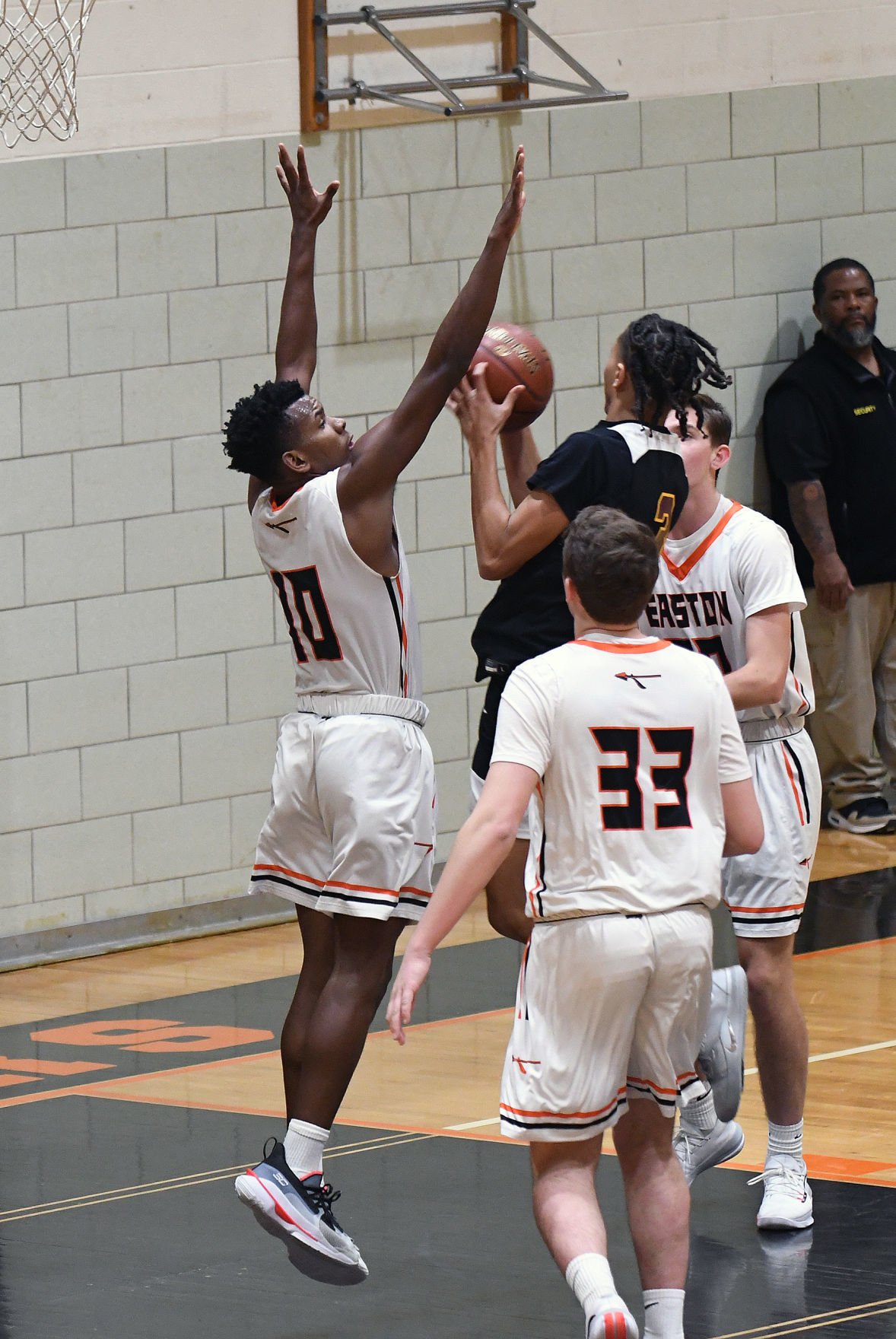 Easton High’s Da’Qwan Johnson (10) defends against a drive by Washington’s Alden Horsey during the second quarter Tuesday evening in Easton. 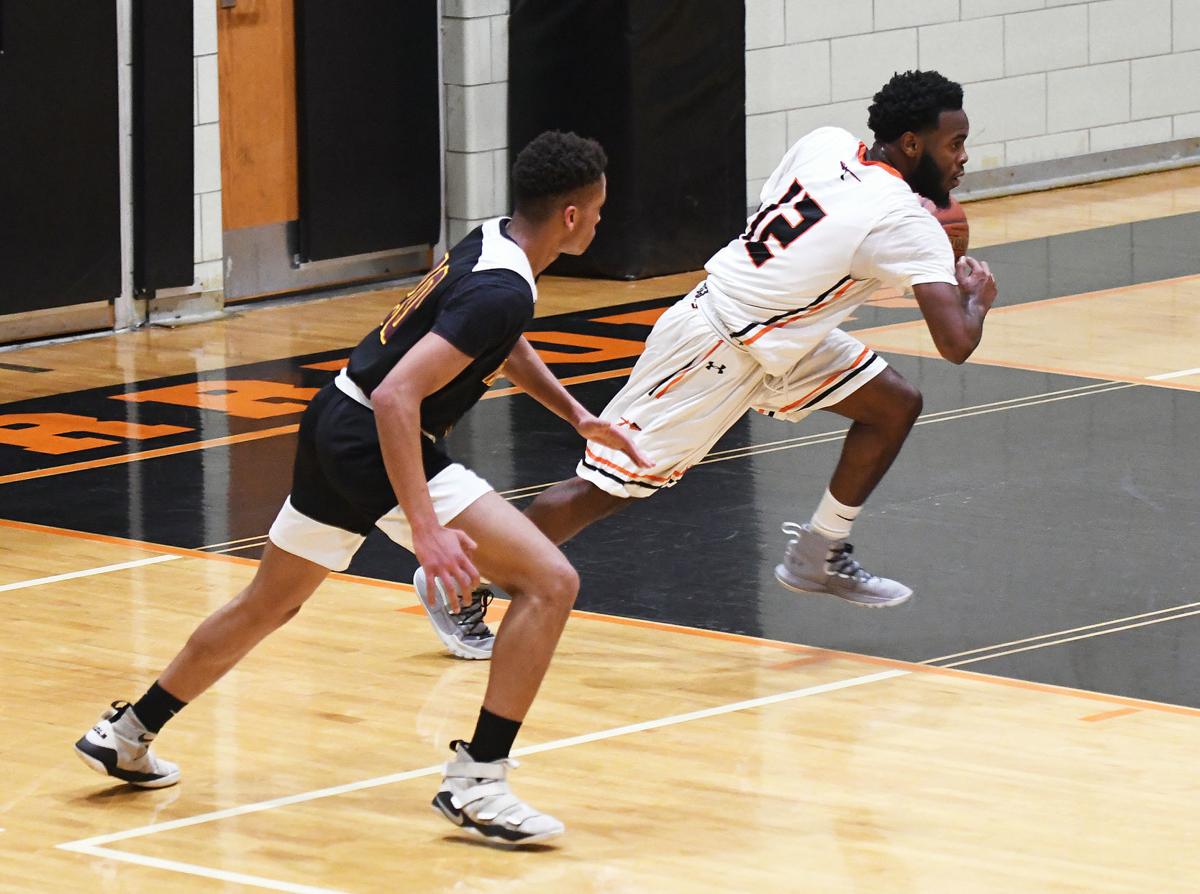 Easton High’s Nyzhier Youmens transitions the ball to offense for the Warriors during the second quarter Tuesday evening against Washington.

Easton High’s Chris Kaminskas shoots a one-hander in the lane during the second quarter Tuesday evening against Washington.

Easton High’s Ryan O’Connor scores with a driving lay-in ahead of Washington’s Alden Horsey during the second quarter Tuesday evening.

Easton High’s Da’Qwan Johnson (10) defends against a drive by Washington’s Alden Horsey during the second quarter Tuesday evening in Easton.

Easton High’s Nyzhier Youmens transitions the ball to offense for the Warriors during the second quarter Tuesday evening against Washington.

EASTON — The Jaguars stayed with Easton for 4 minutes Tuesday evening and then the Warriors got rolling.

Ryan O’Connor hit a one-hander in the lane to begin an 8-0 run and Easton High’s boys’ basketball team was on its way to an easy 80-41 victory over Washington.

Easton improved to 6-4 overall while the Jaguars dropped to 2-7.

All eight players scored for Easton, which, like the Jaguars, were shorthanded due to illness. Shawn Warner netted 12 points for the Warriors, O’Connor 10, and Da’Qwan Johnson nine.

Davin Phillips scored 11 points and Alden Horsey 10 for the Jaguars, who only had two reserves.

Easton head coach Dionte Hynson said Washington’s lack of reserves figured into the Warriors’ plans “just a little bit. We wanted to come out and play man and be aggressive and work on some of our stuff. They actually came out and trapped us pretty good in the beginning of the game, but we were forcing turnovers and finishing around the rim with our layups.”

Easton led 49-25 at the half and while the outcome was virtually already decided there was a chance the Warriors could reach 100 points. That possibility ended in a dismal shooting third quarter for both teams. Warner scored with a fast-break layup 40 seconds into the third quarter and neither team scored for the next five minutes. Youmens ended the drought with a floating trey from the right baseline to put Easton up 54-25 with 2:20 left in the quarter. The Jaguars were held to five points in the quarter, all by Phillips.

“We still had little lapses in the third quarter with scoring,” Hynson said. “We’ve got to work on that. We can’t have those mental lapses. Defense looked pretty good. We were trapping out of our 2-3 (defensive zone) and forcing some turnovers. We’ve just got to work a little bit on our defensive rebounding and finishing around the basket.”

Gavin McIntyre hit a one-hander inside the paint off a loose ball as the Jaguars pulled within 11-7 with 4:14 left in the first quarter before the Warriors embarked on their 8-0 run.

O’Connor grabbed a defensive rebound with 3:25 left in the first and soon after canned his one-hander to put Easton up 13-7. He snared another defensive rebound after a pair of misses by Washington and hit a fast-break layup at the other end to make it 15-7. O’Connor grabbed yet another rebound and called timeout under pressure to end the Jaguars’ next possession. Murray drove up the lane, went airborne, and scooped the ball into the basket to make it 17-7 at 2:14. O’Connor finished the run with a driving pull-up jumper just inside the left baseline for a 19-7 advantage.

Youmens hit his second 3-pointer with 1:24 left in the first quarter and Easton led 22-11 heading into the second. The Warriors continued their success in the second quarter, outscoring Washington 27-14 with the help of reserves. Ja’Avier Pierce and Jackson Cronan each scored for the Warriors in the quarter and Voshell pumped in his first trey.

Voshell added another 3-pointer in the third quarter and three in the fourth.

“He was stroking that thing,” Hynson said of Voshell’s long-range shooting. “Once he gets his feet set, it’s just like a thing of beauty. I love to watch him shoot. He’s just got to build his confidence up, shoot the ball; if they block it, they block it. Nyzhier was hitting his jump shot and he was finishing around the basket too.”

STEVENSVILLE — Blair Goodrich led all scorers with 22 points and Markya Scott scored 15 to pace the Buccaneers, who improved to 7-3, 6-1.

Makala Morton had 21 points to lead the Saints, and Sincere Taylor finished with 11.