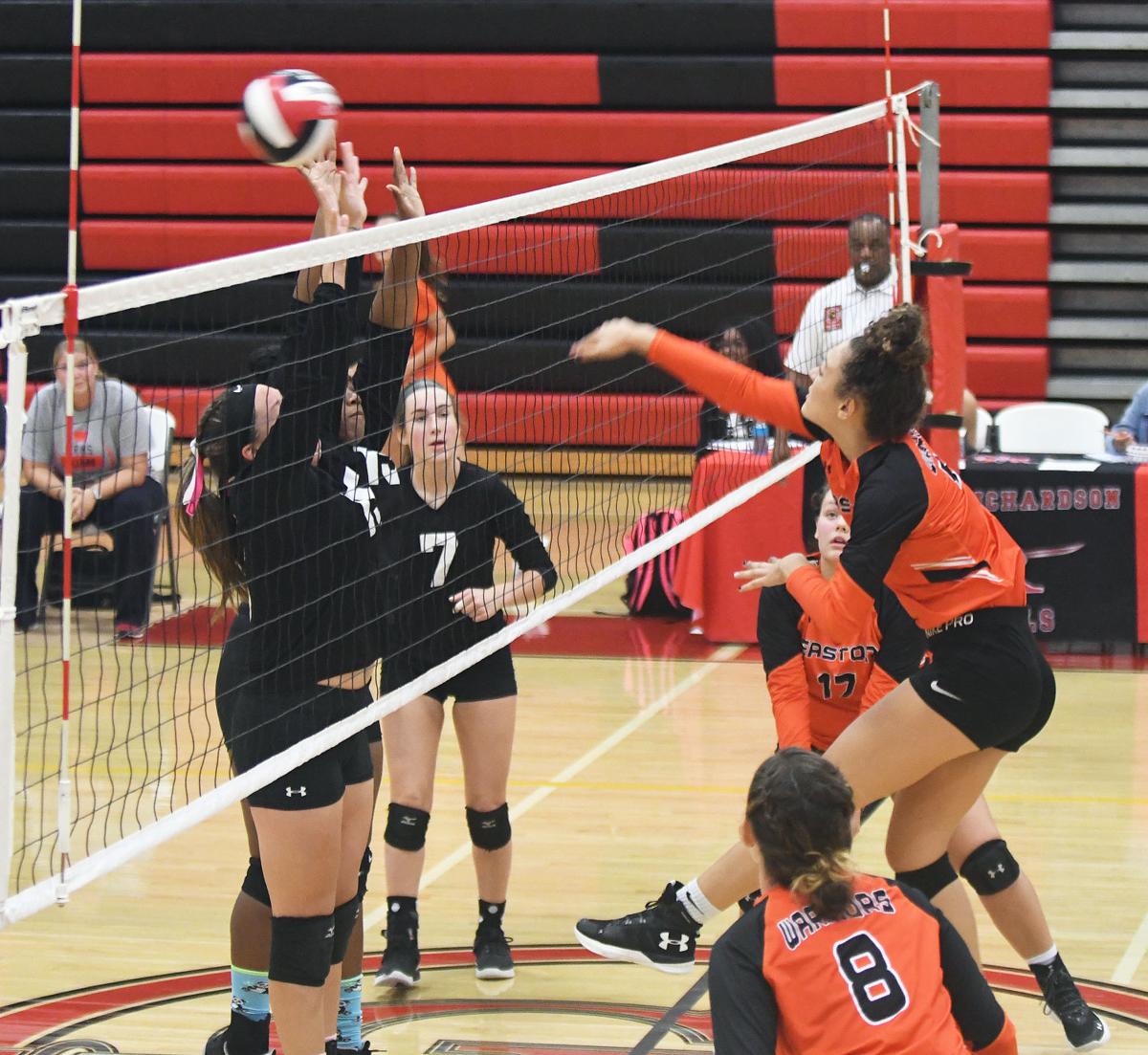 Easton High's Jade Williams follows through on a kill during the second game Monday evening at Colonel Richardson High School. 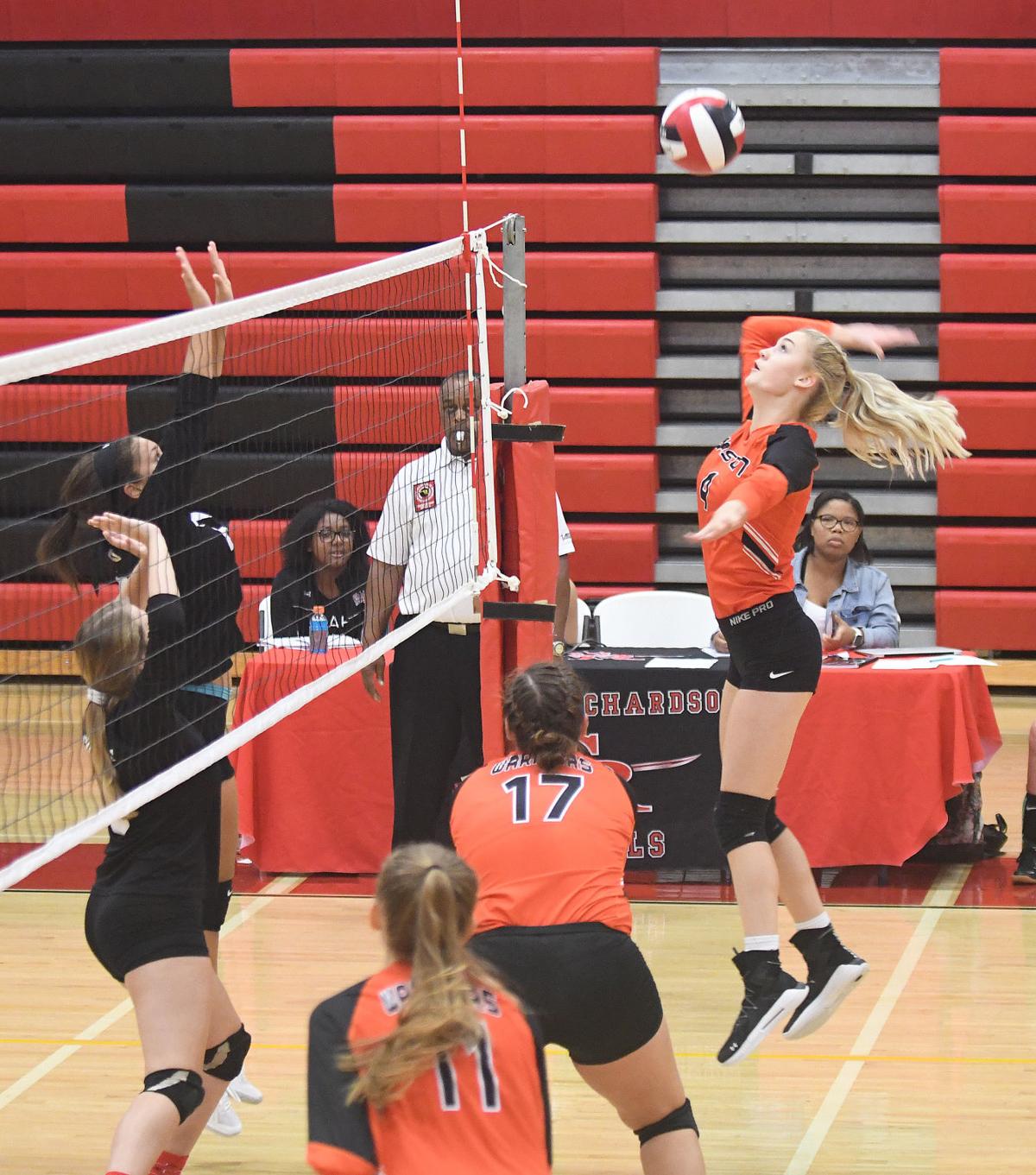 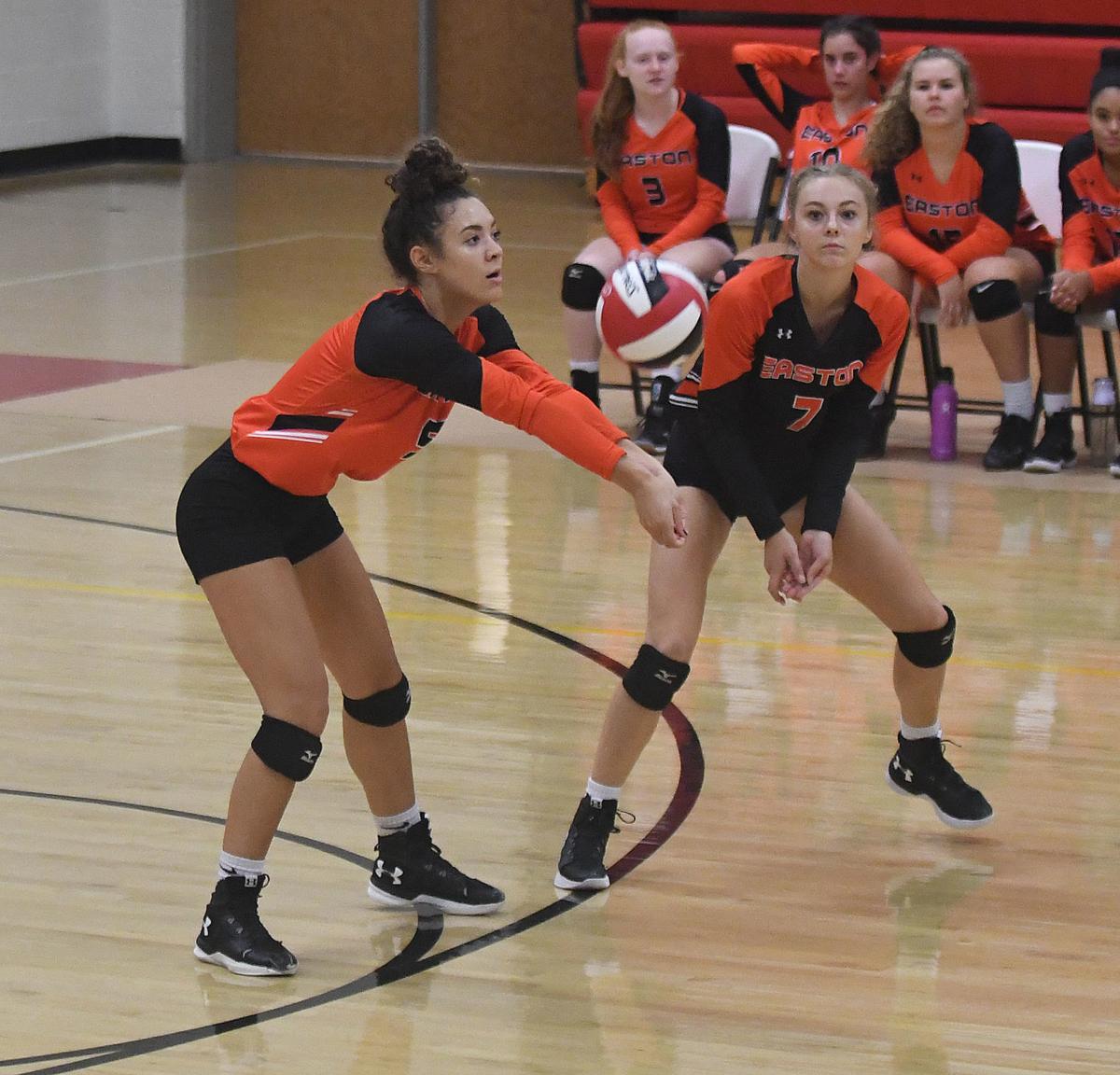 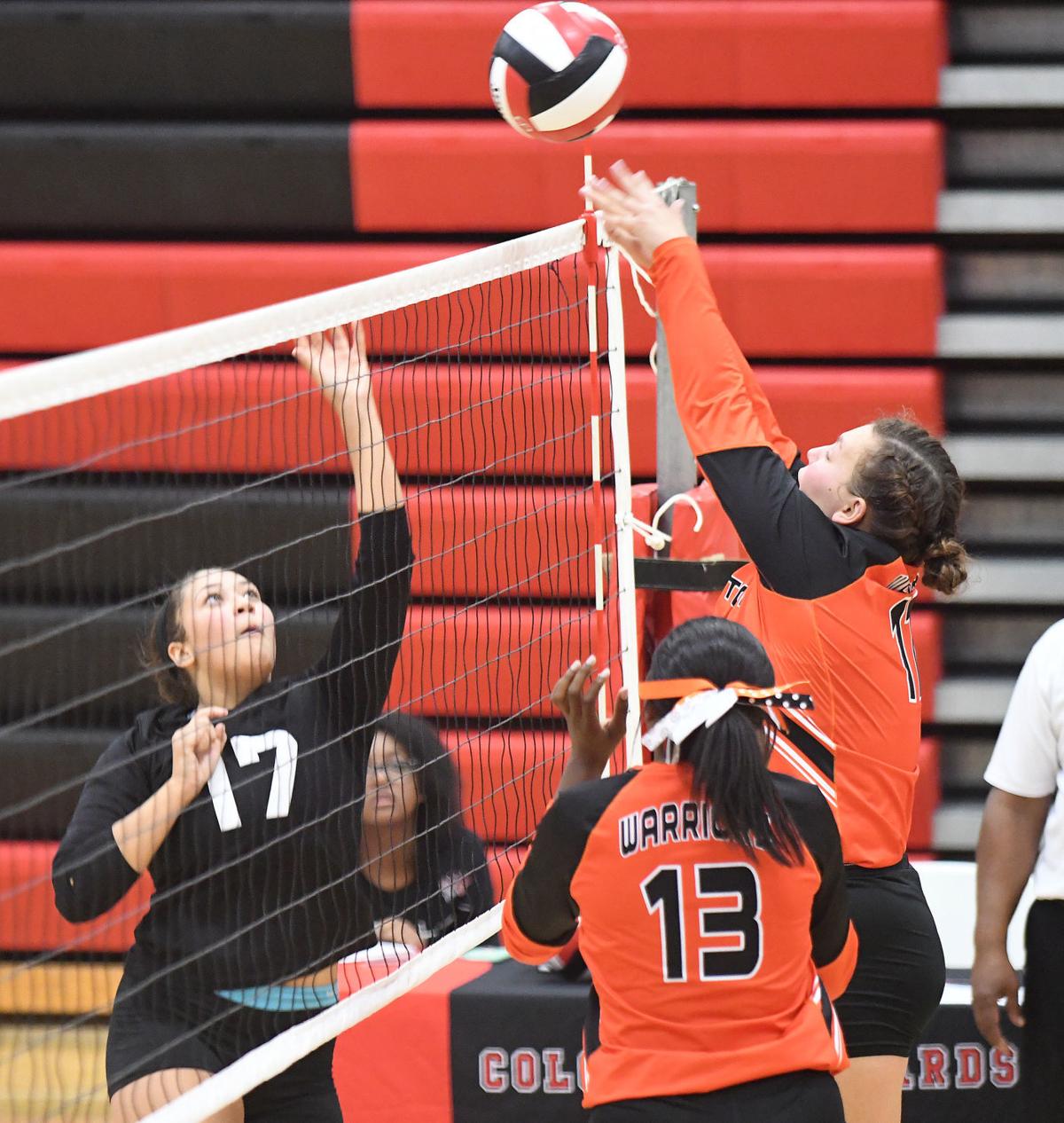 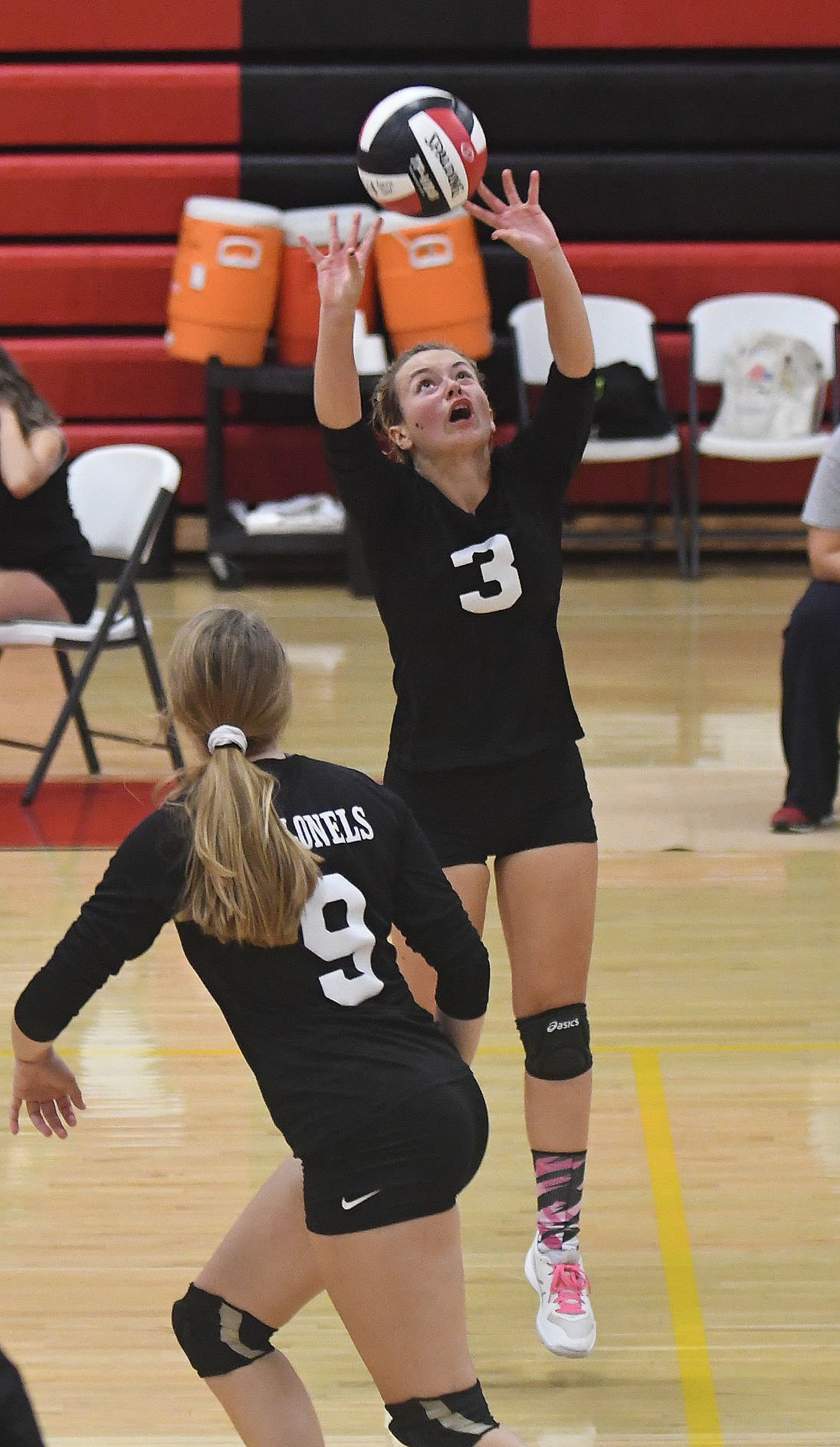 Easton High's Jade Williams follows through on a kill during the second game Monday evening at Colonel Richardson High School.

AMERICAN CORNER — The Colonels delivered enough volleys in the first game Monday evening to put some fear into the hearts of the Warriors. But Easton High’s volleyball team responded by dropping some bombs into the middle of Colonel Richardson’s defense.

Scrappy throughout the match, Colonel Richardson didn’t match Easton’s power game, highlighted by Myia Jeter’s kills from the front and back court. The Warriors also communicated better after the first game resulting in fewer passing and hitting errors.

Colonel Richardson opened Game 1 with three unanswered points before Easton rebounded and slowly assumed what seemed like a comfortable 16-9 lead. But the Colonels got side-out when Alexis Bates tipped over a winner, off a feed from Hope Kraus. Bates then served for six straight points to tie the game. Easton had trouble handling Bates’ low-and-fast left-handed serve and didn’t return it over the net after her first three serves. Jayonia Jackson followed with a kill, which was followed by an Easton hitting error and a serve-receive error to tie the game at 16-all.

Easton then built a 22-20 lead before the Colonels won the next five points for their Game 1 win. Kraus and Jayln Cephas teamed for a winner at the net for side-out. Kraus then served the next four points — the first two from a mishit and a four-hit violation by the Warriors. Cephas won a battle at the net for a point to put CR up 24-22, and Kraus served out the victory with an ace when miscommunication by Easton allowed the ball to drop to the court.

Game 2 was also tightly contested and another four-point serving run by Kraus tied the game at 16-all. But a passing error by the Colonels gave Easton side-out and Jenny Shaw served for five straight points as the Warriors took a 22-17 lead. A middle-hit winner by Emma McKenzie, off a feed from Emily Griffith put Easton ahead 20-16. Jade Williams smashed a cross-court winner past CR’s blockers, off an assist by Griffith, to make it 22-16.

Colonel got the ball back one more time in Game 2 when Bates sent down a kill off a set from Kraus. But McKenzie knocked a deep volley the Colonels couldn’t return, returning the ball to Easton. A hitting error by the Colonels and an ace by Griffith into the far right corner closed the 25-17 win.

“Isn’t every day a rough start? It seems to have been a norm this season so far,” Warriors head coach Jen Powell said. “They needed to start doing the things that they’re capable of. It has nothing to do with skill. It has to do with effort, talking, and moving. … They’re (the Colonels) very scrappy, they get the ball back on you and they hit fairly well.”

The Warriors eased ahead in Game 3 with a four-point service run by Jeter to put her team up 7-3. The Colonels stuck around and trailed only by three points, 11-8, until a CR serving error was followed by a 10-point service run by Williams. Jeter slammed a middle-hit kill off a feed from Griffith, added a winner to an open spot in the middle of the Colonels’ defense, and sent down a two-hander for three straight points that put Easton up 16-9. Williams contributed four aces during the run. Jeter finished the game with a kill from the back-court.

Game 4 also started close, knotted at 9-9, before Easton chipped ahead, staying in front after a right-side kill by Jeter. The Warriors continued to find open floor in the middle of CR’s defense. Jeter dropped two in that space to increase Easton’s lead. Ashanti Stanley sent one there to put Easton up 17-13, beginning a game-ending 8-2 run by the Warriors. Griffith closed the game with four service points, including a pair of aces. McKenzie had opened the run with a two-handed winner at the net. A passing error accounted for Easton’s other point during the run.

“The first two games I thought we played really well, and then after that we just fell off,” Colonels head coach Stephanie Garey said. “We worked hard but not quite hard enough. I definitely think we were caught on our heels a lot more. Definitely we need to improve on things, but I think we’ve improved since the last time we played them. … We weren’t aggressive, and I keep telling them, I’d rather them make mistakes being aggressive than being too easy. We just weren’t as aggressive.”