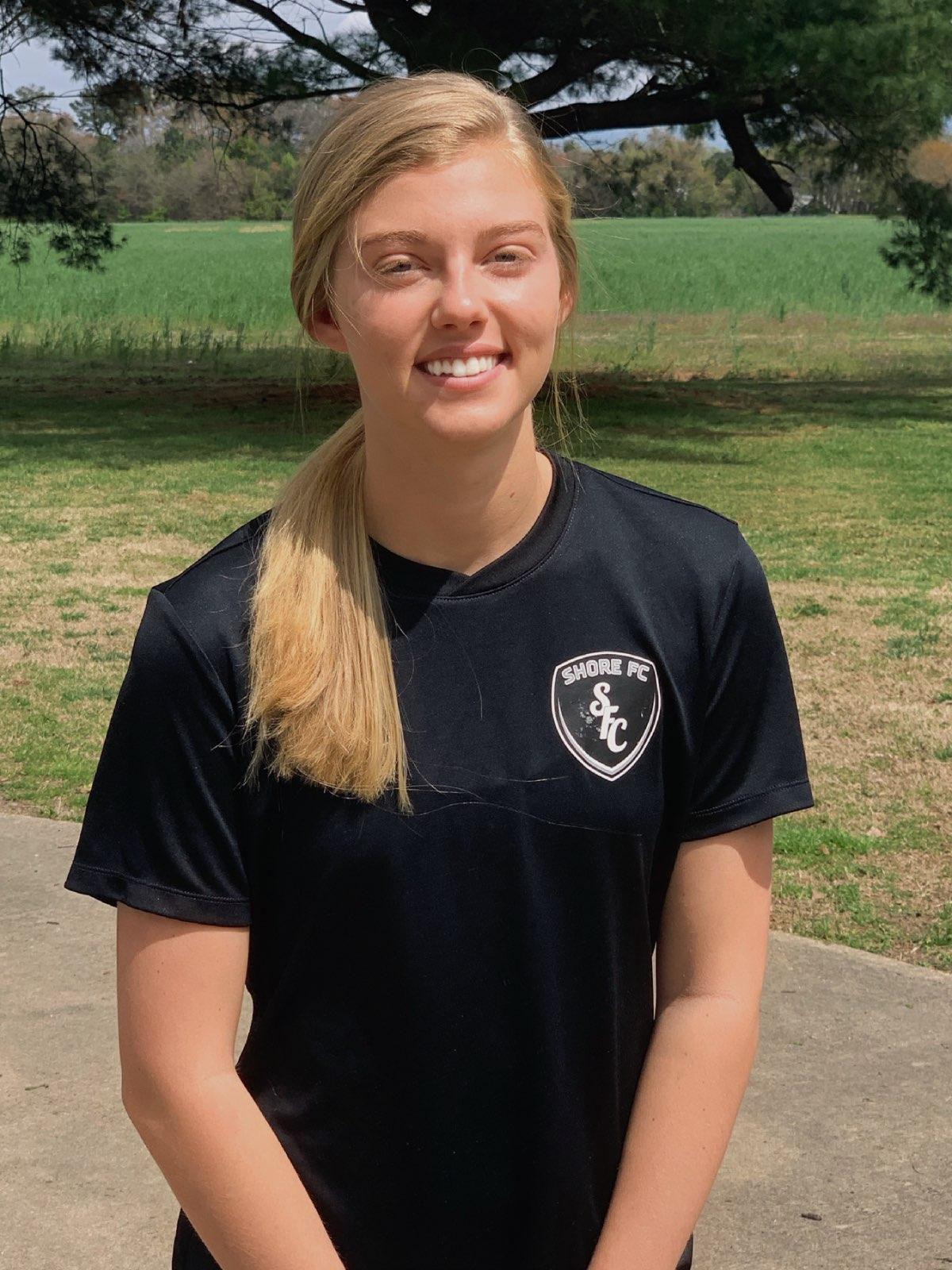 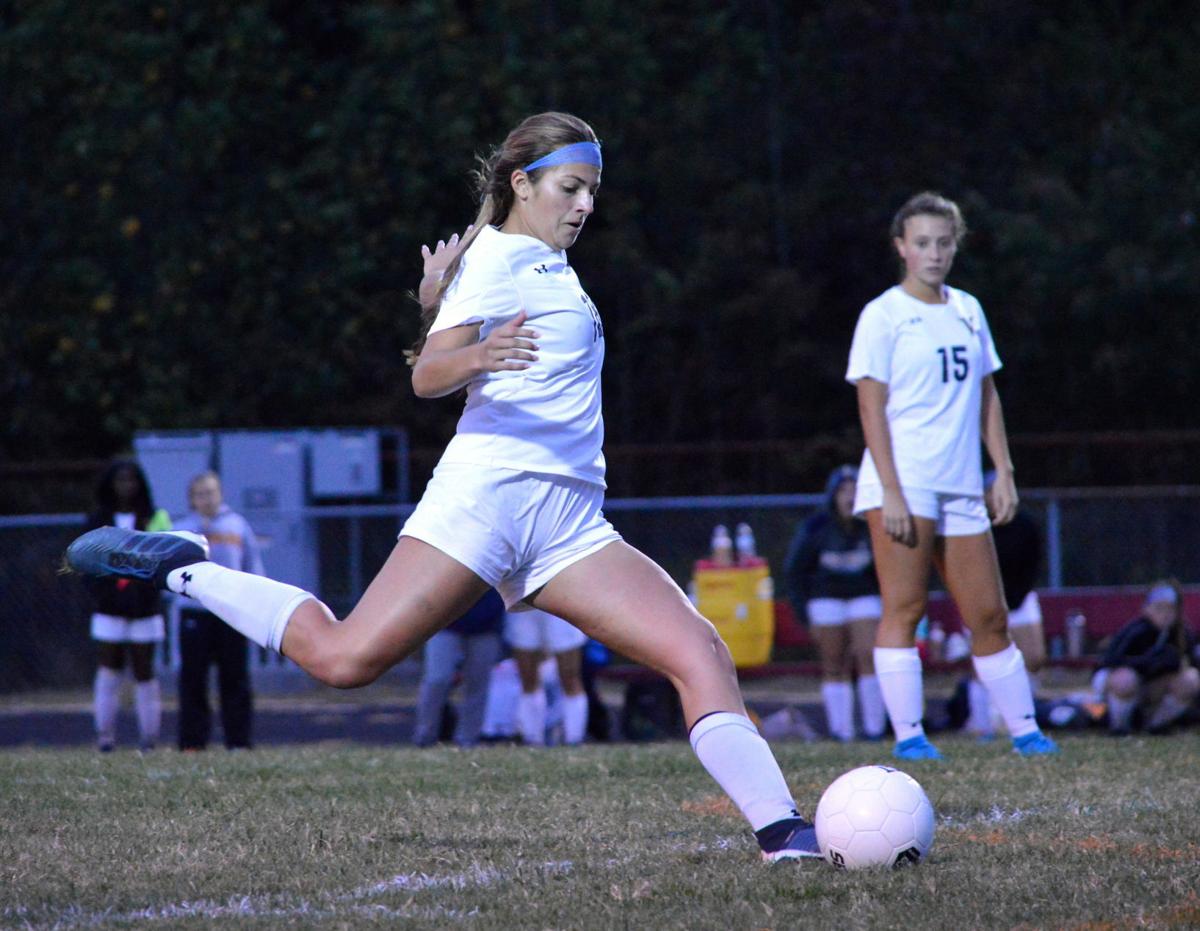 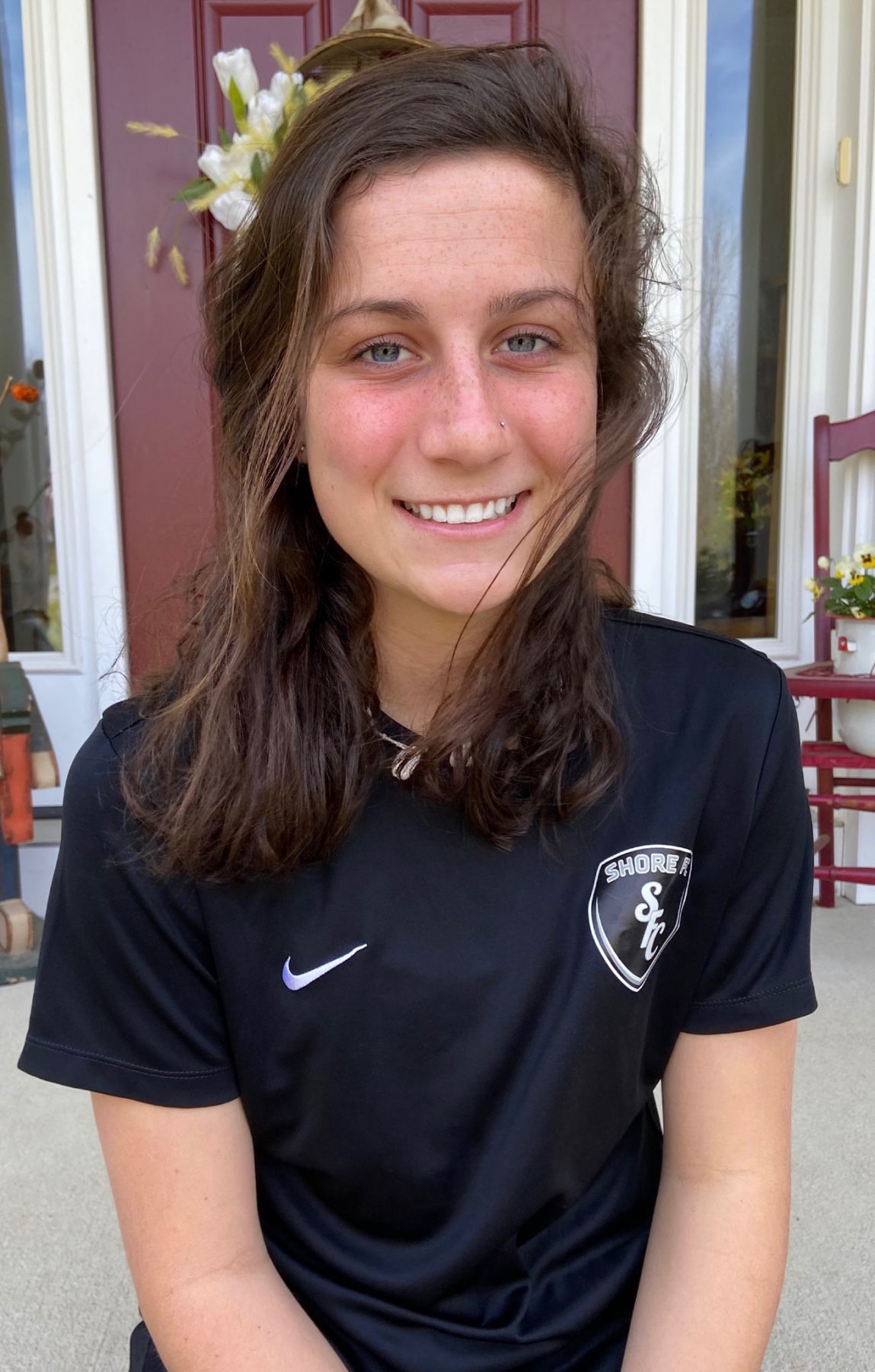 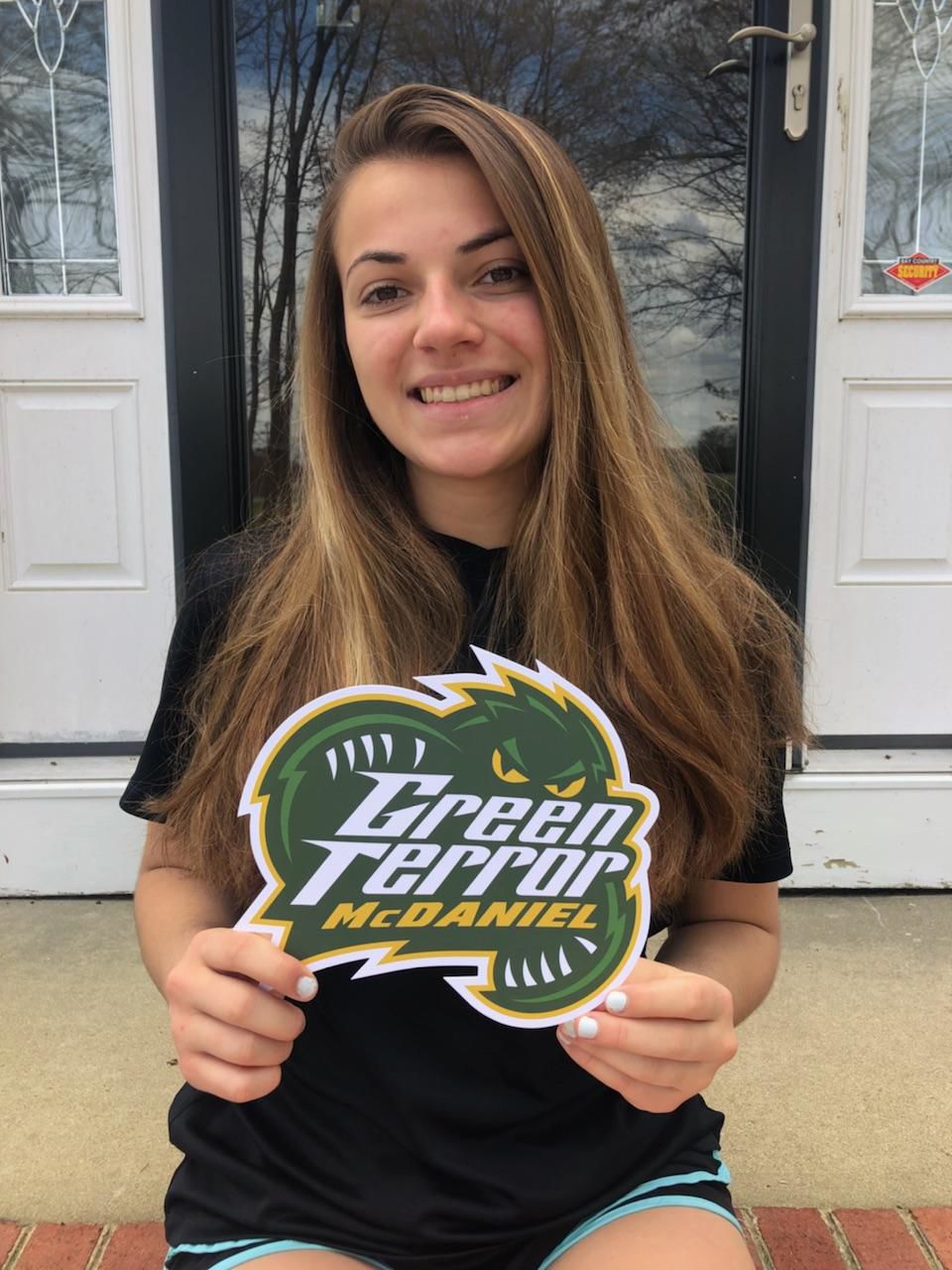 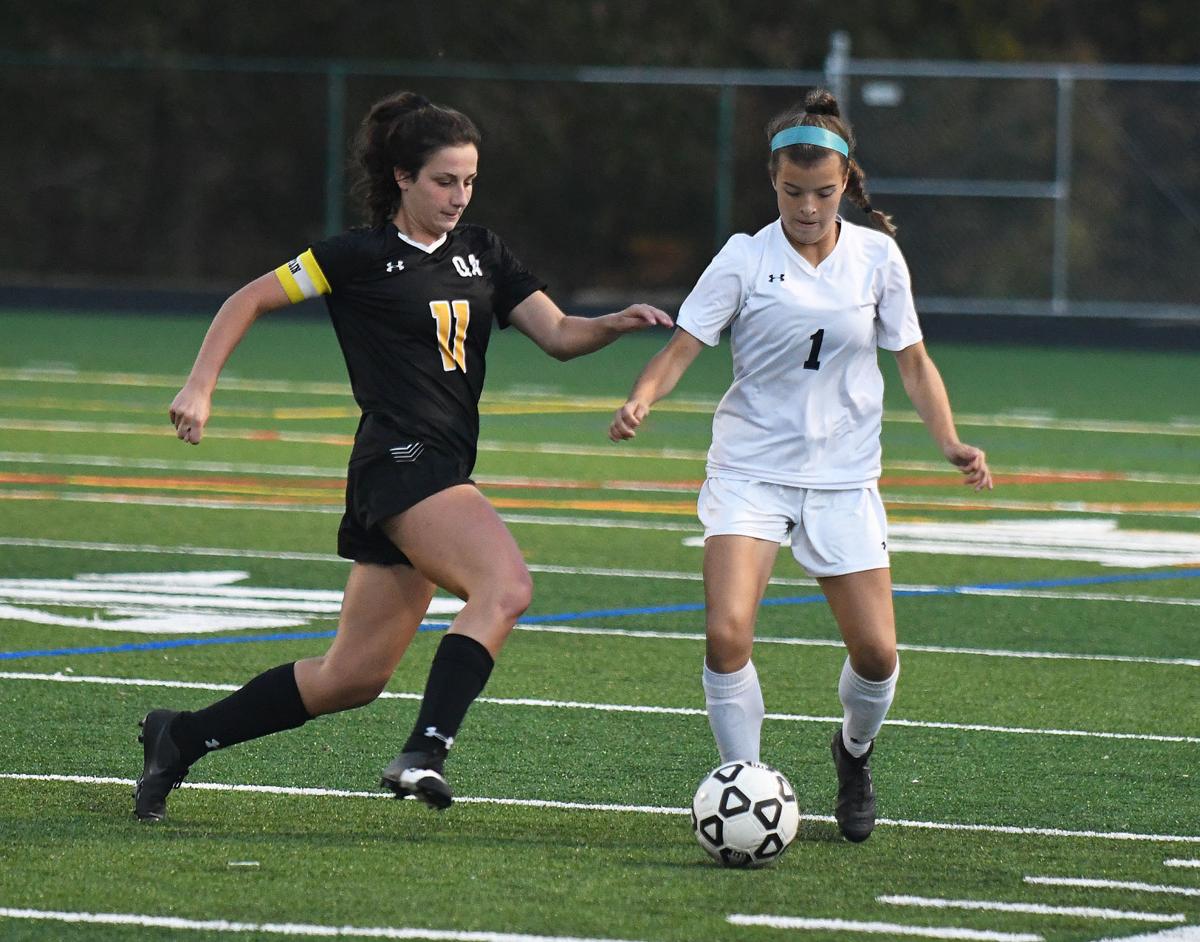 They each have the ability to impact games.

They led their respective high school teams during weekdays in the fall, and played club ball together on weekends.

“They all have a tremendous work rate,” said McDaniel head coach Sandy Lagana, who has guided the Green Terror to a 106-45-13 record and three NCAA appearances in her eight years at the helm of the Division III program. “I think they’re solid technically. But I also think they’re going to be great teammates. They seem like they have really great positive attitudes, and they’re willing to work really hard to potentially have success.”

Blanchard moved from Germany prior to middle school, and became a four-year varsity starter in high school.

“In sixth grade you could tell she was going to be the real deal,” Queen Anne’s County girls’ head soccer and basketball coach Mike Kern said of Blanchard.

Selected the 2019 North Bayside player of the year, the senior forward scored 23 goals and dished 13 assists last season, leading the Lions to an 11-3 record and the North Bayside title. She graduates with 33 career assists, and leaves as the school’s all-time leader for goals (85) and points (118). She also played basketball, and last year qualified for the state tennis tournament in girls’ doubles.

“She’s the kind of player that can make a play when you need it; that goes for basketball or soccer,” Kern said. “Just her athletic ability is above all others around her. She has an extra gear that she can jump into. She has speed and power. She’s smart. And she goes 100 percent at all times. She doesn’t back out of a challenge.”

“I love the location,” said Blanchard of McDaniel, which is in Westminster. “It reminds me of home a lot. And then like Sandy (Lagana) just like popped, and the team, when I visited. I just loved it there. It stood out to me.”

Blanchard is considering business for her major.

A four-year teammate of Blanchard’s with ShoreFC, Windsor has been a four-year starter at Cambridge-SD. The 2018 North Bayside player of year, the senior forward totaled 26 goals and five assists last season for the 6-7 Vikings, and graduates as the school’s all-time leader for goals with 97, to go with her 38 career assists.

“She could have gone over 100 if she wasn’t so nice,” former Cambridge-SD head coach Kareem Otey said of Windsor.

“All four years Brooke’s been the ultimate leader,” said Dennis Wootten, the Vikings’ longtime goalie coach who last year succeeded Otey as head coach. “She thinks everything out. Obviously her talent is as good as probably there’s ever been on the Eastern Shore.”

Like Otey, Wootten said Windsor’s goal totals could have been higher every year had she not surrendered quality scoring opportunities in favor of trying to set up teammates.

“She knew when to pass the ball,” Wootten said. “But when we really had to have a goal, she would do what she had to do to kind of take control. It wasn’t just her physical ability, but her mental ability on the fly. Very rarely did she make mistakes.

“When we had (big) leads she would not take shots that she should have (taken) and passed to other people,” Wootten continued. “That’s the type of person she is. Very unselfish, never looking for the limelight. And her work ethic is second to none.”

Windsor, who up until this year also played basketball and softball, is a four-time North Bayside first-team pick in soccer, and this year was an honorable-mention selection on the all-state team. She has scored five goals and set up four others this season for ShoreFC.

While Blanchard, Windsor and Thomas are heading to the same place, they each said their decision to go to McDaniel was their own.

“I certainly enjoy that they’re going,” said Windsor, who is undecided on a major. “But at the end of the day, I needed to make a decision that was right for me.

“It’s just a really good plus that they’re going,” said Windsor, who will room with Blanchard. “So that’s going to be exciting. I won’t have to feel pressure about like meeting a roommate or feel uncomfortable around them. I’ll just go straight to soccer. And we know how to play together pretty well.”

Thomas has played with Blanchard and Windsor on ShoreFC the past two years, but has been a four-year starter at center back for Parkside.

“She’s a rock star,” Parkside head coach Chris O’Barsky said. “She’s just a solid, all-around great athlete. She has a great work ethic. She’s has a great ability to read the game itself, and look three, four steps ahead. She’s just a solid defender. She’s not afraid to go in and make tackles and make that sacrifice.”

O’Barsky learned of Thomas’ fearless play two years ago, when she tracked down and tackled an opponent on a breakaway during a preseason game.

“It was like a professional foul,” O’Barsky said. “She ended up taking one for the team because she got a red card for it. But that’s the type of player she is. Even though it was really a play-day, we kind of told everybody, ‘Don’t take any unnecessary chances; don’t want anybody getting hurt.’ She didn’t look at it that way. That’s kind of a testament to how she is. She takes every game serious.”

Thomas led a defense that helped the Rams post four shutouts and win the Bayside Conference championship as part of a 13-2 season. A three-time all-South Bayside pick, Thomas had three goals and three assists for Parkside, and was an all-state honorable-mention pick. She has scored five goals and assisted on another off direct and corner kicks this season for ShoreFC.

“I really connected with the team and the coach,” said Thomas, who plans to study pre-med and kinesiology at McDaniel. “And the campus really fit into what I was looking for in a college, as well as academics.”

Over the last four years, Mike Leach, head coach at Kent Island High and for ShoreFC, as invited coaches from McDaniel, York (Pa.), Salisbury, and Wesley (Del.) for training sessions with ShoreFC, and said that, along with showcase play, may have helped Lagana take notice of Blanchard, Windsor and Thomas.

“That way it’s an up-close-and-personal look at the girls,” Leach said.

Leach has gotten plenty of up-close looks at all three, and thinks they can contribute at McDaniel.

“I’ve been coaching girls for probably 12 years now through high school and travel, and she’s by far the best defender I ever seen come from the Shore,” Leach said of Thomas. “Brooke brings a different dynamic. She’s good playing with her back to the goal and holding the ball up and stuff like that. She also has tremendous vision and a good shot — both feet. And Abby, she’s got the exceptional speed and good shot with both feet, and she’s a great playmaker, as well as a scorer.”

Notes: McDaniel went 17-6 last season and won a second straight Eastern College Athletic Conference championship. … Lagana has been aware of talent on the Eastern Shore before. In 2014, she had Abby and Lindsey Keen of Parkside on the team. Abby Keen played four years at McDaniel, Lindsay one. The only other player from a Bayside Conference school to play at McDaniel during Lagana’s eight years was Mardela’s Abby Caitlin, who was on the 2013 roster as a freshman. … Lagana’s other Eastern Shore connection is that her grandparents live in Trappe.