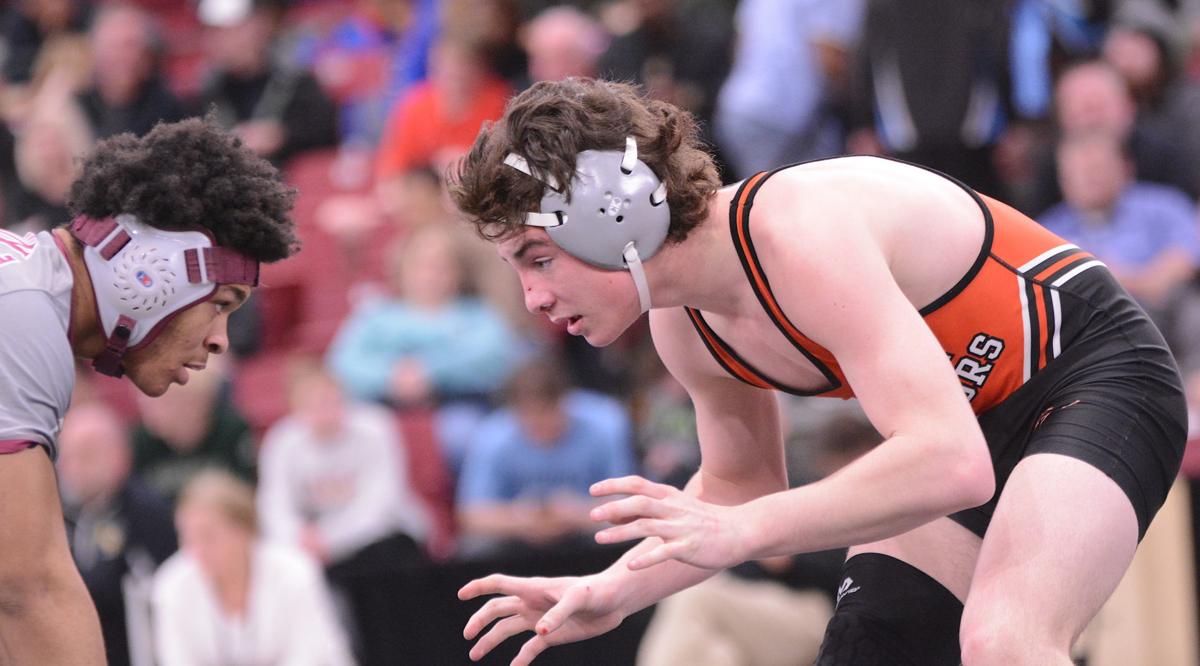 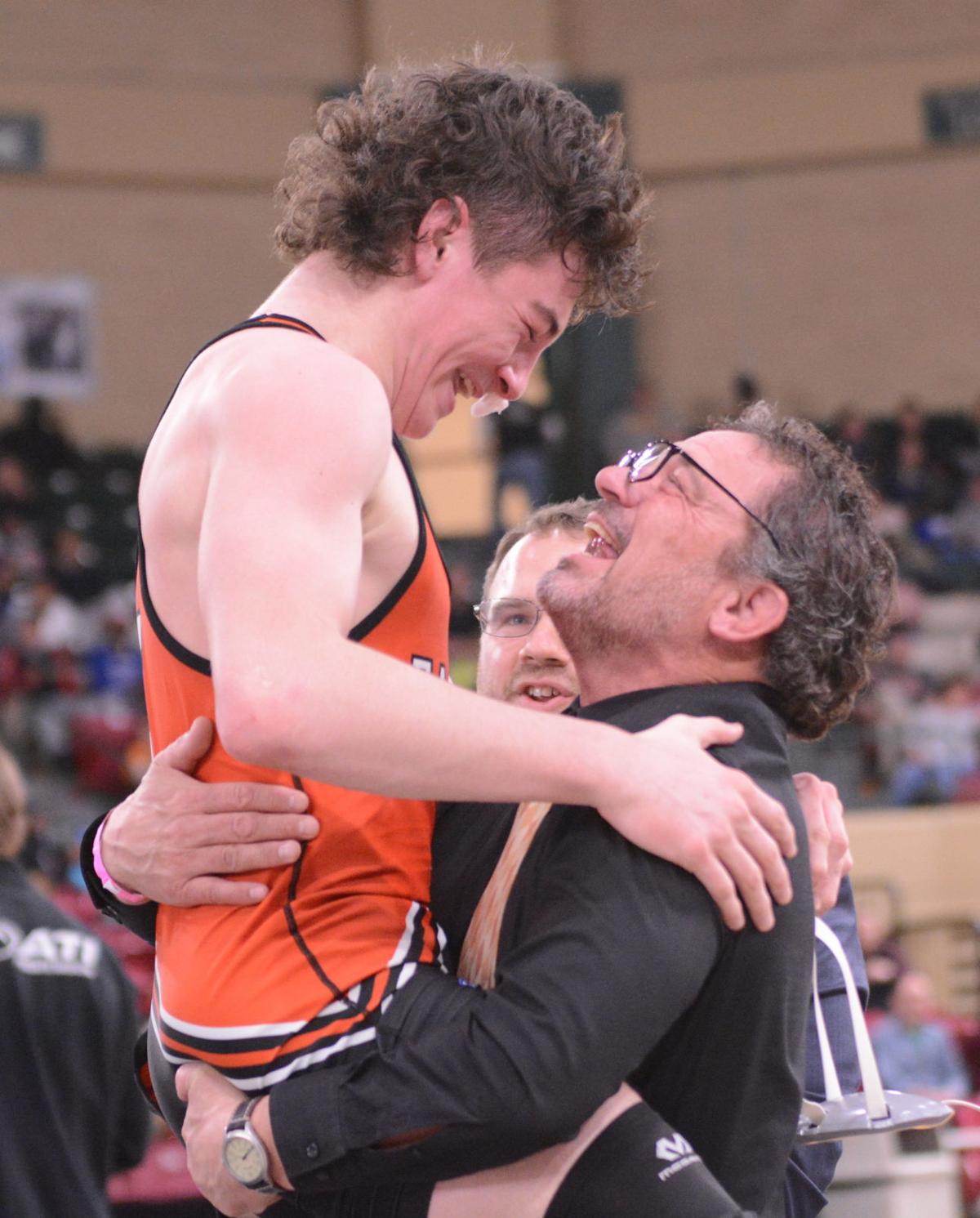 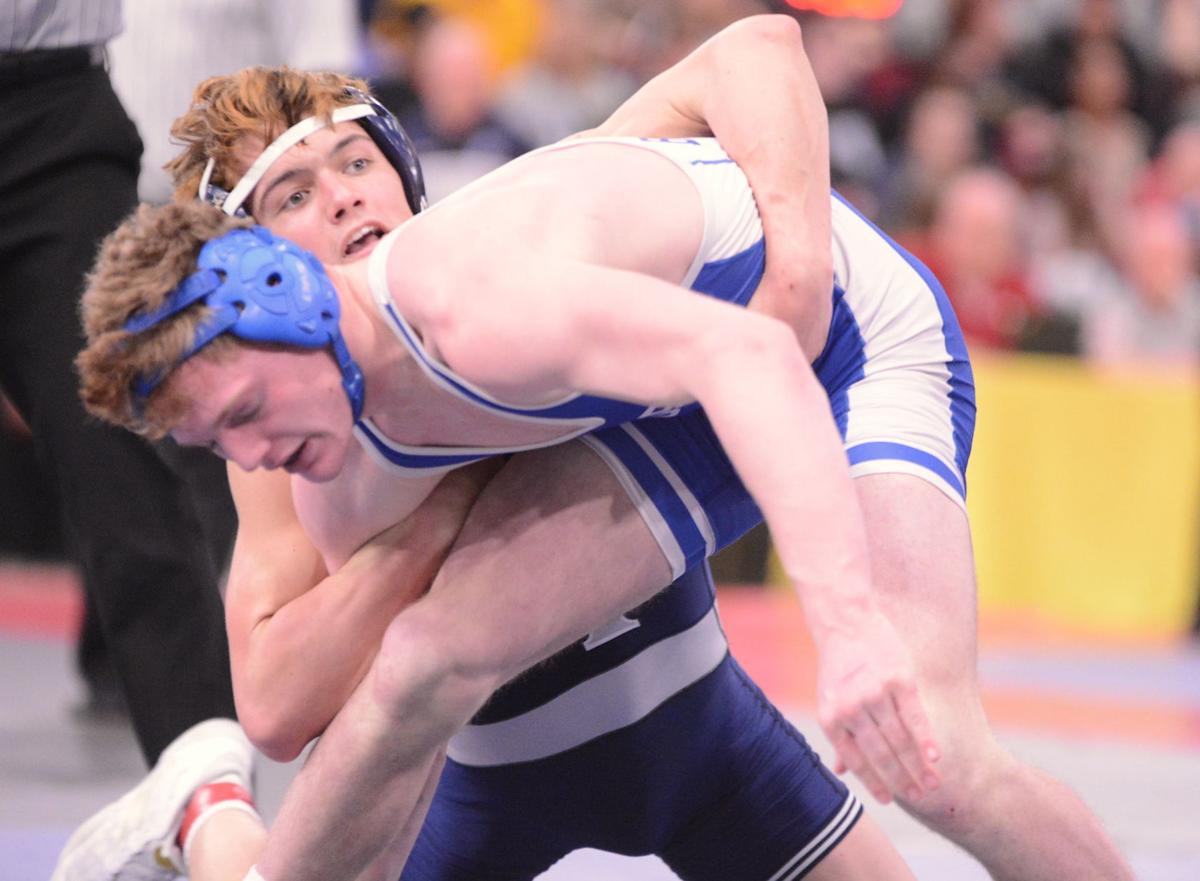 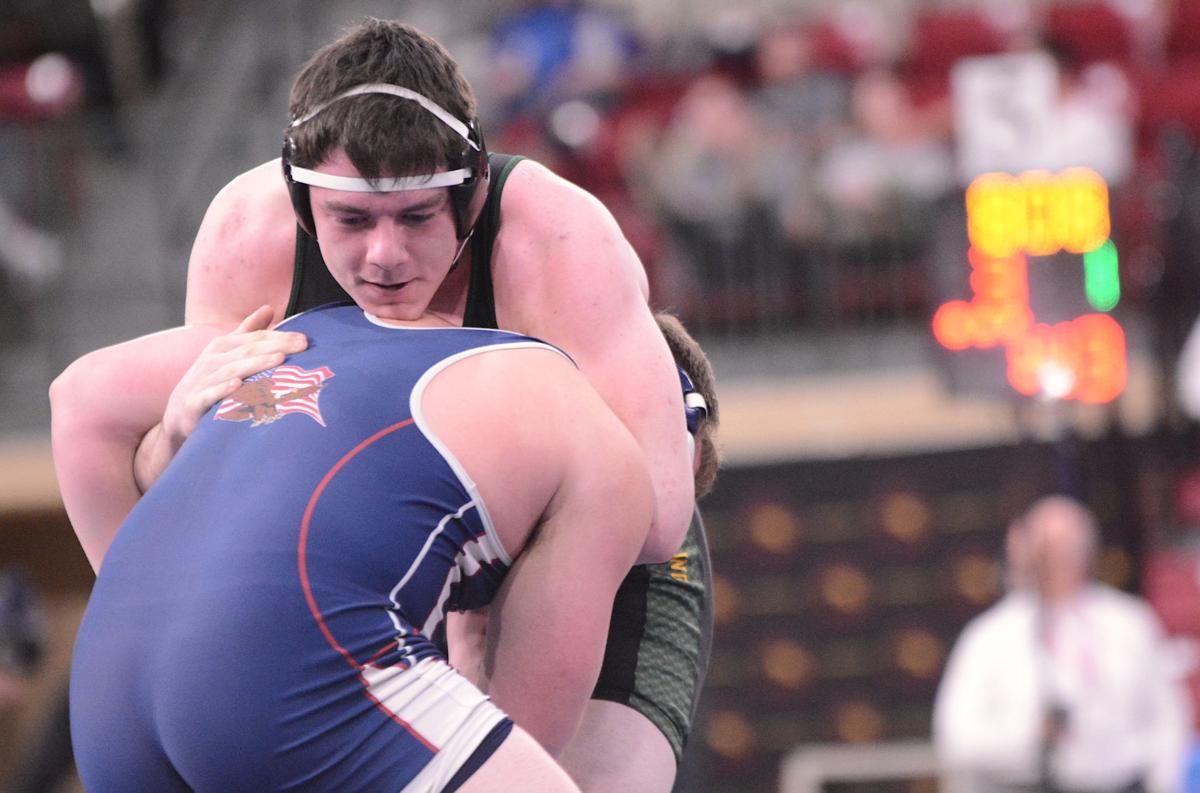 UPPER MARLBORO — It wasn’t his most aggressive six minutes of wrestling.

But it may have been some his smartest.

“I definitely wrestled a lot smarter than aggressive, and I kind of regret it because that’s not usually how I wrestle,” said Bentley, who pinned his first three opponents en route to reaching the final. “But I think the nerves got to me, trying to like make history for my school; to make everyone proud around me to win two states titles. But I definitely wrestled a lot more cautious and smart. I didn’t want to make a mistake in the state finals. I didn’t want to choke.”

But Bentley wasn’t as aggressive as he had been winning his school-record fourth Bayside Conference and Class 2A-1A East Regional titles the two weeks leading up to states. He maintained that aggressive style on Day 1 of the state tournament, recording pinfalls of 49 and 38 seconds in the first round and quarterfinals, respectively.

He suffered a bloody nose less than 30 seconds into his semifinal with Overlea’s Jerome Vonziah, got through a scoreless first period, then built a 3-0 lead on the way to a pinfall with 6 seconds left in the second period. That set up a final with Fernandors, who came into the match 43-1.

“We knew that kid was a very funky wrestler,” Easton head coach Jason Biringer said of Fernandors. “That kid was very explosive. Great athlete. He was the real deal.”

Fernandors showed that when he scored the first points of the match with a takedown 45 seconds into the first period for a 2-0 lead.

“He didn’t have that super aggressive focus he had in the earlier matches,” Biringer said of Bentley. “He settled down in that second period and I felt like, ‘OK, we’re back.’ I think he was in control. It was not easy though. We were definitely on the edge of our seats.”

Those would be Fernandors’ only points. Bentley worked an escape to draw within 2-1 with 48 seconds left in the opening period. But between the first and second periods, Easton assistant Steve Culver came out of his seat and pleaded with Bentley to increase his hand fighting and get more physical.

Bentley’s aggression wasn’t immediate, but never did he looked panicked.

Bentley escaped off bottom 16 seconds into the second period to tie the match at 2-all. Fernandors stuffed a shot off a restart midway through the second, but with 28 seconds remaining in the period, Bentley scored a takedown that proved the difference.

“When we got to the third period I knew he was gassed,” Bentley said. “Like I’ve got a bigger tank than him. And I knew if I slowed him down … because we watched matches of him (before). He’s like hyper, energetic and all this, and if I slowed him down I knew I could beat him.”

Bentley’s bleeding nose started the blood clock three times in the third period, perhaps preventing either wrestler from getting into any kind of groove. But Bentley gave Fernandors no openings over the final two minutes, took deep shots then held them for stretches, and maintained his lead until the final whistle.

He then turned toward the Easton fans with his arms open before rushing over to his coaches. Bentley (34-2) returned to the center of the mat to have his arm raised, shuffled over to shake hands with the Fairmont Heights’ coaches, then ran and leaped into Culver’s arms.

“He’s like a father figure to me,” Bentley said of Culver, whose son, Ben, had his hopes for a state title ended by a shoulder injury his junior year before suffering a 5-4 loss in the 138-pound final as a senior in 2012. “Like with everything that happened with Ben not winning a state title and last year, him not being in my corner, though I know he really wanted to. I wanted to get the state title for him. Everything we’ve been through with each other. Him beating me up mentally and physically. I wanted to get it for him. That was one of the most (important) things I accomplished probably was winning a state title with him in my corner.”

Bentley then moved toward the seats where he was soon wrapped in a bear hug by his father, Tony — who was on the receiving end of his son’s state-championship leap a year ago — before embracing his mother, Michele, and friends.

“Once Max got that takedown in the second period, I felt very comfortable,” Biringer said. “He settled down, started to get more into it. He’s a very smart wrestler. Max has a lot of years on his side.”

While the Bayside Conference won a record five individual state titles last week — the previous high was four set in 2000 and matched in 2007 and 2008 — it had eight finalists, including Kent Island’s Matt Miller and Queen Anne’s County’s Sean Blackwell.

A senior, Miller (21-6) had never wrestled prior to transferring from Texas to Kent Island his junior year.

“My cousin, Hadyn Blanchard, he wrestles,” Miller said of his teammate who qualified for states but did not wrestle because of an injury. “I lived in Texas for so long and when I finally moved up here he got me into it. He was like, ‘Man, you should come out and wrestle.’”

Miller didn’t qualify for states as a junior, but he earned a spot this year at 145, finishing third in perhaps the toughest weight class in the 2A-1A East Regional — a regional that placed the same four wrestlers in last Saturday’s state semifinals with Stephen Decatur’s Noah Reho, North Caroline’s Rhian Silsley, Queen Anne’s Eric Smith and Kent Island’s Miller.

Miller advanced to the final with an 8-6 overtime victory over Silsley, who had defeated him 8-2 during the dual-meet season.

“I was confident I could win the match,” Miller said. “I watched him wrestle a couple other matches and saw how weird his style was and I knew I could match it.”

Miller battled Reho through the first period before the Decatur sophomore earned a second-period fall for his second straight state championship — he won the 4A-3A crown as a freshman.

“Not qualifying last year and then showing up this year, I was just super happy to make it,” Miller said. “I was surprised. It was definitely some of the best wrestling I’ve ever done.”

“He wrestled fantastic,” Sitar said. “He avenged a couple of losses that he had had throughout the season with the victory over Silsley. He just wrestled really well the whole tournament.

“Even the Reho match, he wrestled well,” Sitar continued. “Got in on a couple of shot attempts. He almost could have made something happen. And then in that position where Reho ended up pinning him, he even made the correct move in regards to trying to bring that knee up to prevent Reho from hooking the ankle. But unfortunately he didn’t feel the cradle there. He just started so he should have been proud of himself.”

A junior who also didn’t qualify last year, Blackwell missed the opening weeks of this season while recovering from an injury. He returned for the Westminster Duals and in his first match back, lost by decision to Manchester Valley’s Grant Warner (47-4), who finished runner-up at 220 in last week’s 4A-3A tournament.

Blackwell (37-3) won his next 34 matches, reaching the 2A-1A East Region final, where he lost a 6-5 decision to Joppatowne’s Chris Kalambihis, who eventually placed third at states. The surprising junior then put together a string of three consecutive decisions to reach the state finals, where he ran into Williamsport senior Brandon Oyster, who pinned Blackwell in the first period to cap a 51-0 season.

“I was hoping to make it as far as I could,” said Blackwell, whose losses were to a state champion, state runner-up, and state consolation-finals winner. I wanted to at least qualify for states.”

He did more than that.

“For Sean, never wrestled before coming in as a freshman, he’s grown leaps and bounds every day,” Stricker said. “We knew he probably had a shot at making it here this year just from last year. He just kept working hard every day in the room. He kept getting better each match. I think the regional final kind of helped him fix a couple of things. He kind of put on a display of what he can do this weekend.

“That kid I think pinned his way through the tournament,” Stricker said of Oyster. “That kid’s really, really tough. Probably more experienced than Sean. That was the difference was the experience.”