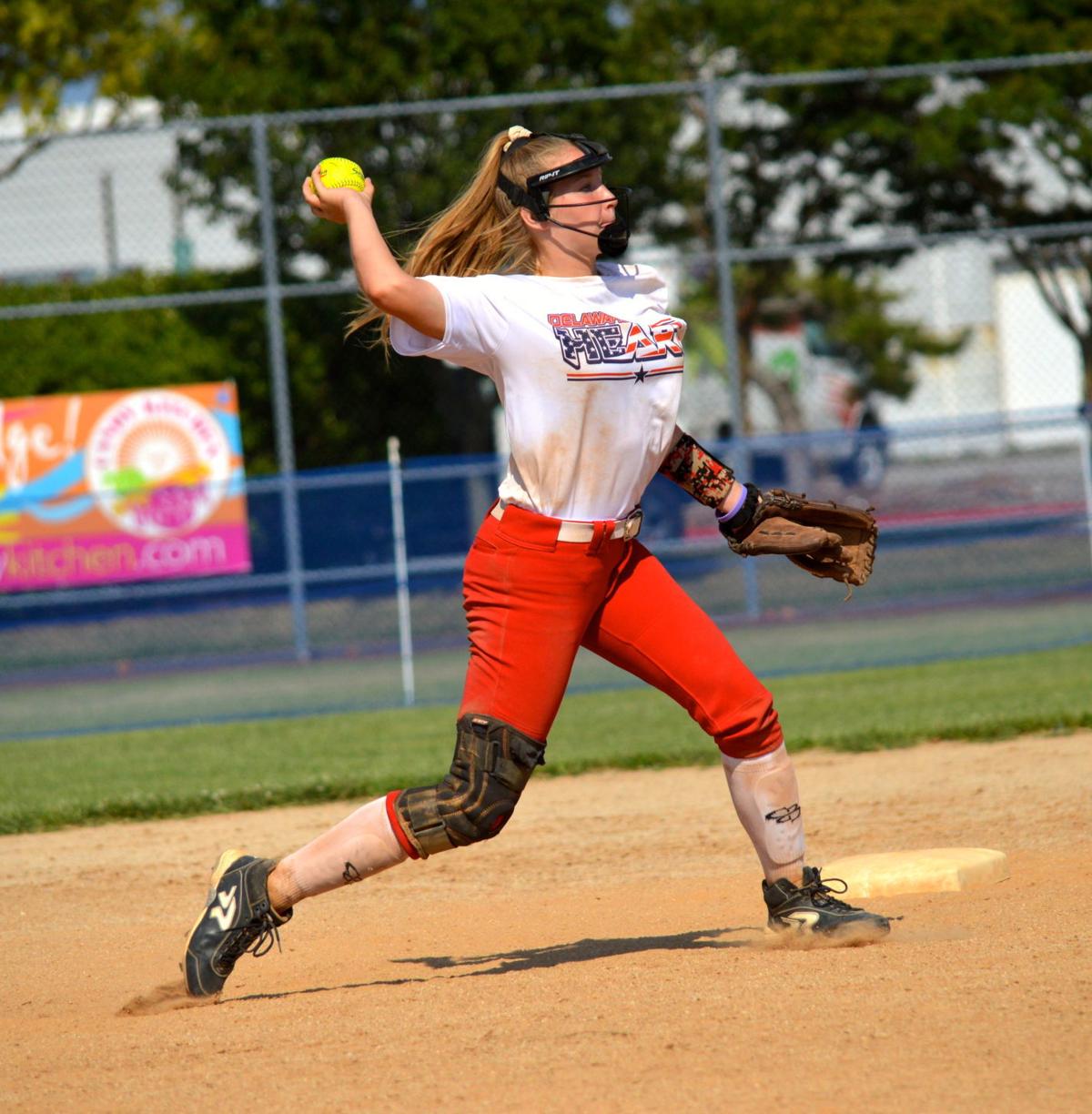 Delaware Hearts Shortstop Cassidy Stubbs, a rising senior at Colonel Richardson High School, throws to first for an out on the opening day for the USSSA Softball World Series in Ocean City Tuesday, July, 30. The Delaware Hearts are in the 18u tournament. 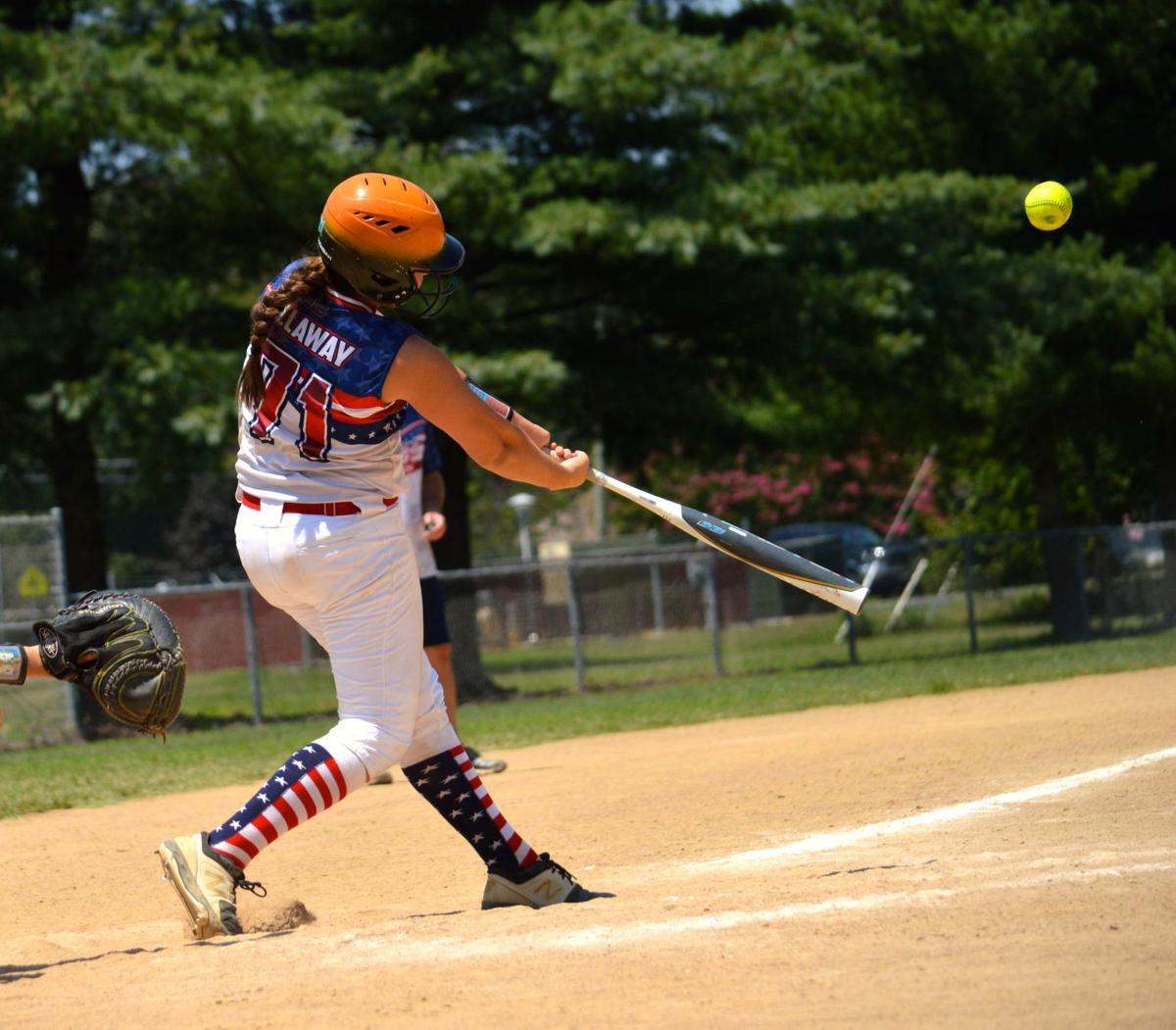 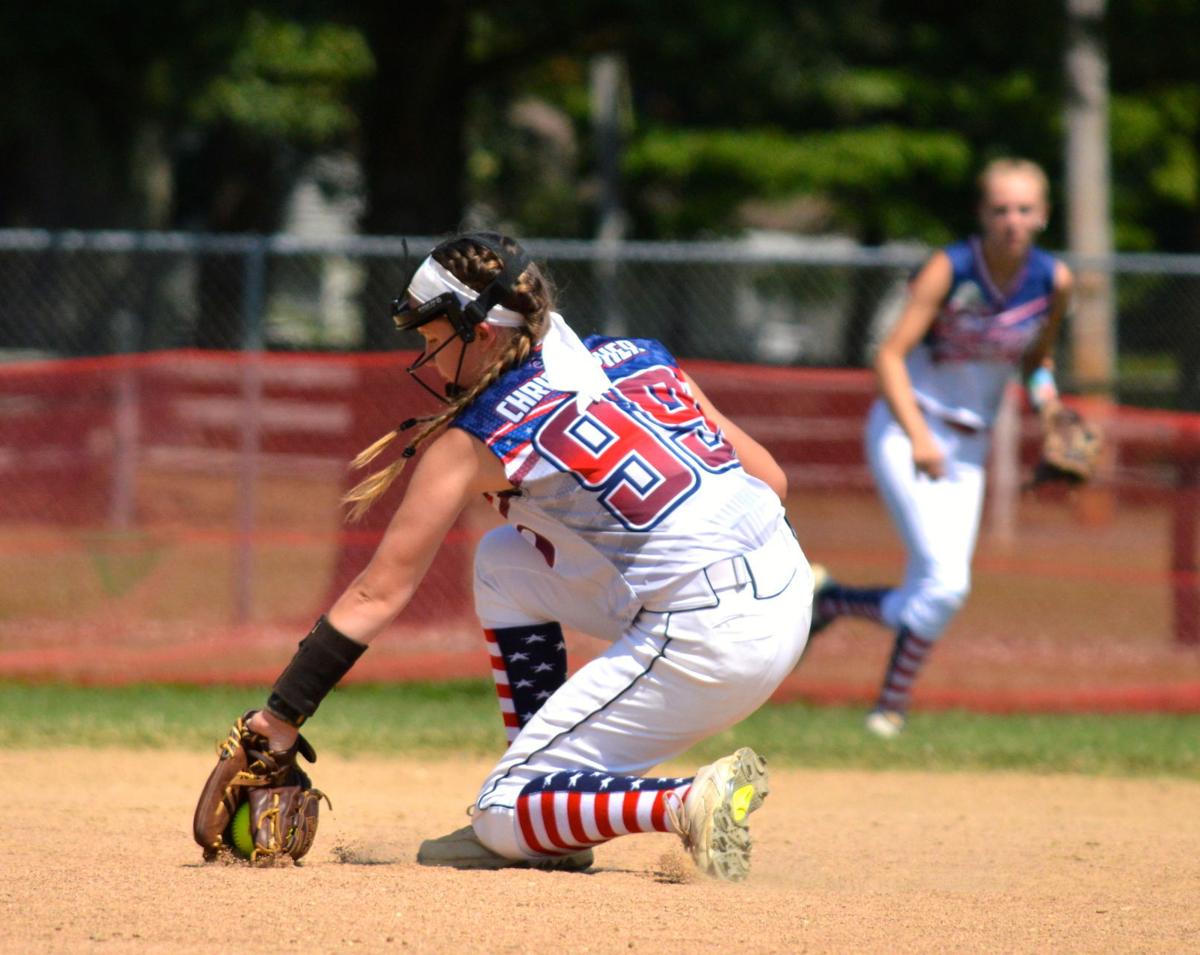 Bayside Breeze second baseman Olivia Christopher fields a grounder with her backhand before throwing to first for an out Tuesday, July 30, in the USSSA Softball World Series in Salisbury. 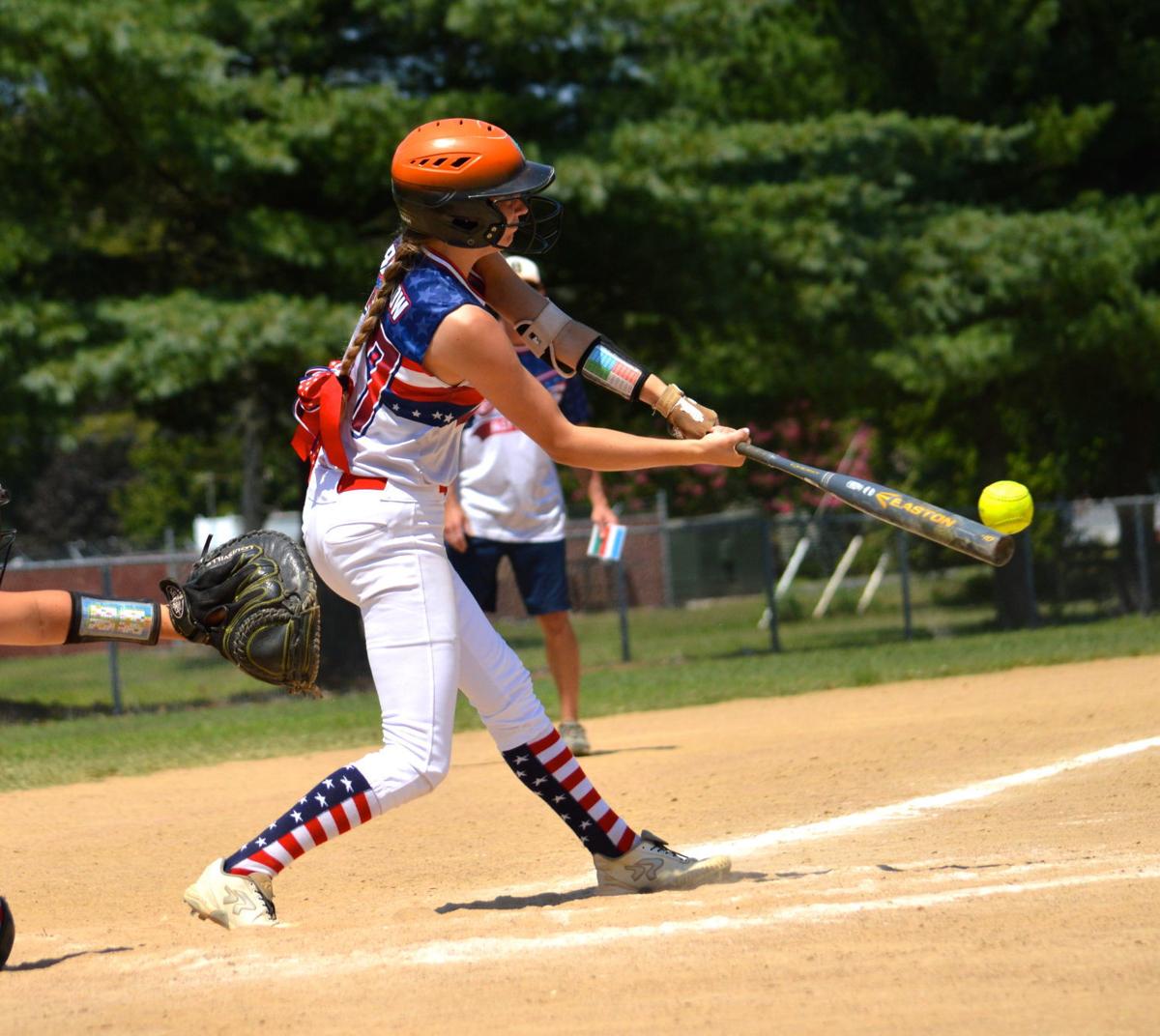 Delaware Hearts Shortstop Cassidy Stubbs, a rising senior at Colonel Richardson High School, throws to first for an out on the opening day for the USSSA Softball World Series in Ocean City Tuesday, July, 30. The Delaware Hearts are in the 18u tournament.

Bayside Breeze second baseman Olivia Christopher fields a grounder with her backhand before throwing to first for an out Tuesday, July 30, in the USSSA Softball World Series in Salisbury.

While pool play began at 8 a.m. for some, the Bayside Breeze began its three-game day shortly after 11 a.m. at Winter Place Park, against the Lisi Oil Bombers (Tower City, Pa.)

The Bombers opened with a run in the top of the first, Samantha Masser (three runs) drawing a leadoff walk, moving to third on a sacrifice bunt, and scoring on a passed ball.

The Breeze responded in the bottom of the first with a run when Grace Buchanan (2 for 2) singled with one out and scored on an error on a grounder to third off Chloe Callaway’s bat.

The Bombers capitalized on several Breeze fielding errors in the next inning, the biggest rally of the game.

Brittany Rice made a trip around the bases when her single to right got by the outfielder there for a three-base error, making it 2-1. An error at short, followed by a thrown-away sacrifice bunt, put two more Bomber runners in scoring position, and a walk loaded the bases, still with none out.

After starting pitcher Emily Darling popped up the next hitter to short, a Morgan Koutch single brought in two runs. Masser was hit by a pitch, and a fielder’s choice at home accounted for the second out. But another infield error, led to two more runs and a 6-1 lead before the inning ended.

“We had a terrible second inning,” Breeze manager Scott Christopher said. “We just didn’t get a good handle on the ball, and we’re not usually like that. And they took advantage of it.”

The Breeze rallied to make it close in the bottom of the second, though. With two outs, Emilee Cohee reached on a mishandled grounder to short. Briauna Milton followed with a single to center field, which was also not fielded cleanly, allowing Cohee to score to make it 6-2.

Logan Marvel walked, and Erica Barrow’s double to left-center scored Milton and Marvel to make it 6-4.

The Bombers tacked on single runs in the fourth and fifth to make it 8-4, but the Breeze had one last rally.

Marvel reached when her leadoff single that inning, the last in the rigidly-timed contest (no new innings could begin after 80 minutes of play), got past an outfielder, putting her at second. A wild pitch moved her to third and a passed ball brought her in to make it 8-5.

Barrow walked and Buchanan singled to right-center. Barrow was tagged out trying for third, in what proved to be a huge factor.

“I sent Erica because that’s just how I try to coach,” Christopher said. “I tend to be a little aggressive on the bases, make the other team make the play. And I have a lot of confidence in girls like Erica. We’ve got some speed at the top of the lineup, and you have to try to take a chance sometimes, grab that extra base, especially when you’re down late.

“It didn’t work out, and that’s entirely my fault, that out at third. But I’m proud of the way the girls came back,” Christopher said. “They played hard to the last out.”

Darling fouled to third for the second out of the inning, before Callaway launched a two-run homer over the left-center field fence, pulling the Breeze within 8-7. The one-run lead was enough as Bayside’s next hitter grounded out to second, ending the game.

The Breeze rebounded with a 4-3 victory over the Bridgewater (N.J.) Panthers. In their final game, the Breeze lost, 5-2, to the Homer (Illinois) Heat.

Competing in the 16U tournament, Bayside is scheduled to begin the next phase of the tournament today at 9:40 a.m. in double-elimination bracket play against the Hudson Valley (N.Y.) Titans.

The Delaware Doom, an 18U team consisting of players from schools in the Bayside and Henlopen (Del.) conferences, went 2-1 in pool-play in Willards. Opening with a 1-0 victory over the Brewster (N.Y.) Rockets Gold squad, the Doom earned a 2-1 win over the Panthers from Quakerstown, Pa.

The Doom fell to the NJ Sparks (Pompton Plains, N.J.) in its third game.

The Doom’s double-elimination-bracket phase begins at 11:20 a.m. today. It plays in a second-round game, having earned a first-round bye.

The Delaware Heart Black U18 squad, playing at Northside Park on 125th Street in Ocean City, began with a 12-5 blowout win over the Edison (N.J.) Angels. Losing the next contest, 6-2, to the Freedom Elite (Conn.), the Heart played its final game against the Impact Panthers Gold (Scranton, Pa.).

Megan Stubbs drove in the next Heart run, in the top of the second, to make it 2-0. It stayed that way until the bottom of the fifth, when Brinley Sobeck’s three-run homer proved to be the decisive blow in a 3-2 win.

Maddie Tisher had two hits in the loss.

The Heart is slated to resume play today at 9:40 a.m. against Bombers Elite (R.I.). More local squads join the locals who played Tuesday in action Wednesday as the week-long event continues. The championships are scheduled for Saturday afternoon.