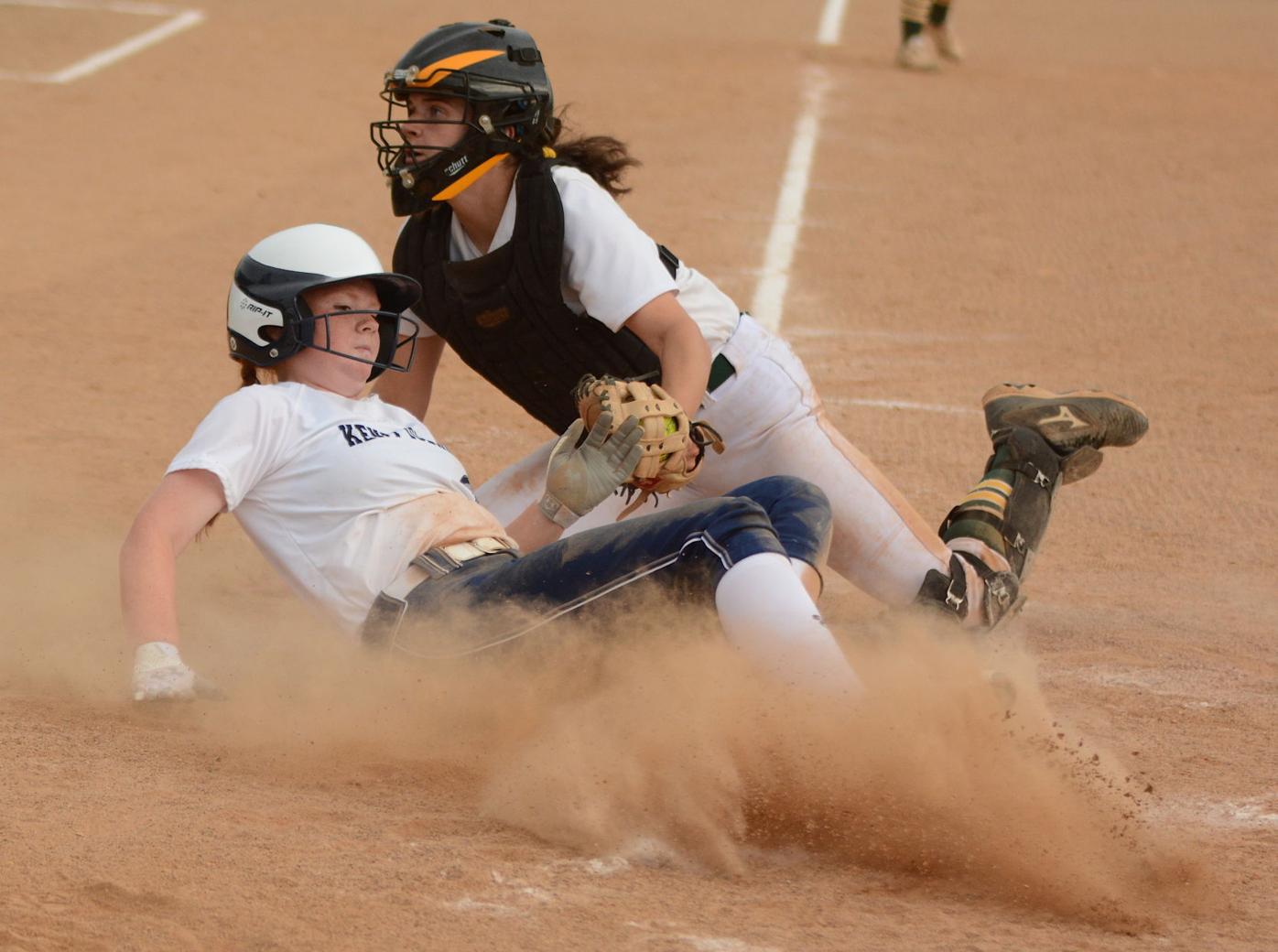 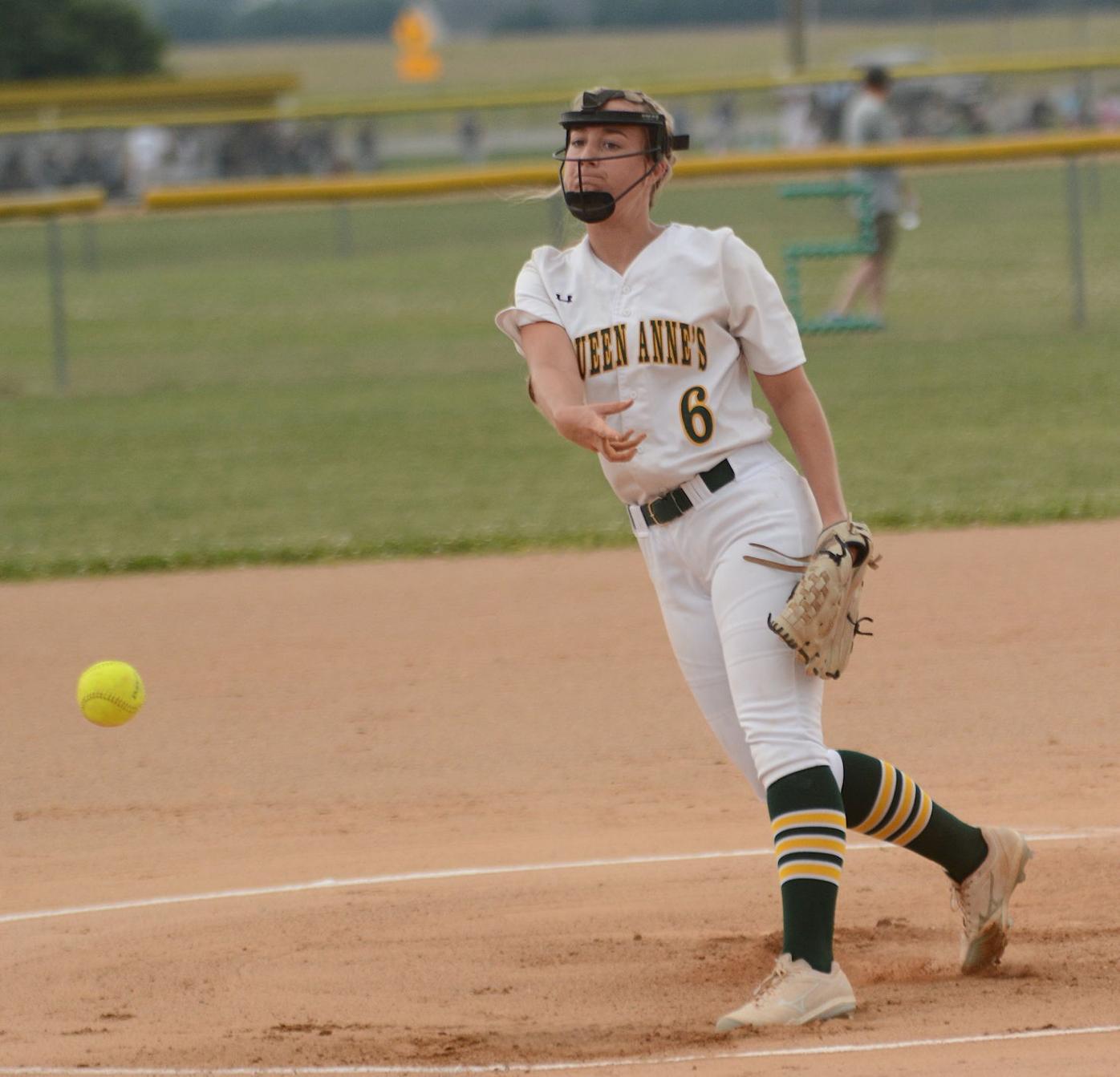 CENTREVILLE — When your offense has outscored the opposition 108-13 in the regular season, and your ace has shown an ability to mow ‘em, the defense can get overshadowed.

Wednesday afternoon, Queen Anne’s County High’s defense stepped into the spotlight, as the Lions threw out three runners — two at home plate — during a 12-2 six-inning victory over Kent Island in a Class 2A East Region II softball semifinal.

“So they got a couple of base hits up the middle and then the defense really stepped up,” Lions head coach Kim Betts said. “They made some great plays; great execution on our cuts. We practice them every single day. Huge plays at the plate by Tristyn (Stewart) and (Kamryn) Brandt. And then they had that play at third as well on a cut and Bre (Athey) had a big piece in that as well. So that was huge momentum; huge momentum lift for us.”

The Lions started showcasing their defense in the first inning. The Bucs (1-9) had runners on third and second, when catcher Brandt zipped a throw to third baseman Autum Huber, getting Danielle Kosowsky in a 2-5-2 rundown for the final out.

Queen Anne’s built a 5-1 lead after two innings, but Kent Island looked primed to take a serious chunk out of that as Kosowsky, Allison Corbin and Maddie Eskew hit consecutive singles off Cameron Whiteford (8-0) to open the top of the third. Queen Anne’s left fielder Belle Fields tried to make a diving catch on Eskew’s sinking liner, but the ball got past her, allowing Kosowsky to score, pulling the Bucs within 5-2. Lions center fielder Stewart retrieved the ball and fired to third, where Corbin initially appeared to be safe. But after the umpires conferenced, Corbin was called out. Whiteford escaped any further damage, striking out Jessica Balderson before inducing Lizzie McConnell into an inning-ending pop-out to second.

Down 6-2, Kent Island put together another rally in the top of the fifth. Corbin (2 for 3) singled to left. Eskew (2 for 3) then doubled to center. Stewart got on the ball quickly, fired to shortstop Athey, who turned and threw home, where Brandt applied the tag on Corbin for the second out of the inning.

“Our defensive team was extremely phenomenal today.” Stewart said. “We had every single ball in front of us, and we knew what was happening when it was happening. Like we paid attention and we didn’t let them hitting the ball get to us.”

Queen Anne’s widened its lead to 9-2, but again Kent Island looked ready to shave its deficit, as Whiteford issued back-to-back walks to McConnell and Ava Blum to open the top of the sixth. Whiteford fanned Rilyn Heyliger before getting Erin Bowen to pop out to second. Taylor Applefeld then singled to center, where the speedy Stewart grabbed the ball and fired a laser home to Brandt, who tagged out McConnell for the final out of the inning.

“Tristyn and all our team, we were really able to connect and listen to each other well today,” Brandt said. “Yesterday at practice we were working on these exact plays and we just proved ourselves as a defense being able to get them done, and get multiple plays at the plate. While Cameron usually mows them down, her defense had her back today.

“It was great to see we could get the plays done, the hard plays done where we really haven’t had that many at the plate this year,” Brandt added. “We had two or three today so it was really great to see that we could do that.”

Queen Anne’s took a 2-0 lead in the bottom of the first. Stewart (3 for 5, three runs) hit a leadoff double on the first pitch she saw from Kosowsky. After Athey was walked, Whiteford (3 for 4, four RBIs) knocked in Stewart with a single. Whiteford was erased when Brandt bounced into a fielder’s choice. Brandt then was thrown out attempting to steal second, but Athey scored on the play.

Balderson doubled and eventually scored on a bases-loaded walk in the second, drawing Kent Island within 2-1.

The Lions extended their lead to 5-1 in the second, as Mackenzie Stubbs hit a leadoff single and scored on an error. Whiteford then doubled to plate Belle Fields and Athey for a four-run cushion.

Brandt doubled and scored on Emily Gunther’s single in the fourth, giving the Lions a 6-2 lead. That lead was padded to 9-2 in the fifth. Whiteford delivered an RBI single. Brandt then hit a ball sharply that was misplayed, allowing two runs to score.

Gunther led off the Queen Anne’s sixth with a double and moved to third on Huber’s single. Kosowsky struck out Stubbs, then got pinch-hitter Caroline Taylor to pop out to second. Stewart followed with a comebacker to the mound that Kosowsky couldn’t make a play on, allowing Gunther to score for a 10-2 lead. Athey followed with a single to right that plated Huber and Stewart for the 10-run slaughter rule.

“Our offense has been stupendous all year,” Betts said. “Cameron’s been able to keep her composure even when teams have made solid contact on her because she knows our offense can back it up, and she’s able to regain focus. And Kent Island hit the ball today.”

CAMBRIDGE — Maddie Pleasants tossed her second no-hitter of the season, striking out 16, as the top-seeded Vikings advanced to the 1A East Region final.

Pleasants is now six strikouts shy of 600 for her career.

HAVRE DE GRACE — Marissa Hyland pitched a complete game, striking out five and walking four as the Colonels advanced to Friday’s 1A East Region I final.

Hyland also had three hits and four RB Is for Colonel Richardson. Olivia Christopher had two hits, including a double, and scored two runs. Ally Taylor, Ava Carels and Cheyenne Cayer each had two hits.

PASADENA — Jackson Cronan threw a complete-game six-hitter, striking out three and walking three, as the Warriors advanced to the Class 3A South Region II final.

Ryan O’Connor doubled for Easton (8-2), which will wait to play the winner of the Stephen Decatur-James M. Bennett game on Friday for the region title. Jarin Winters, Colin Baynard, Chris Baynard and Cronan each singled.

AMERICAN CORNER — Zach Robbins earned the win and Brock Johnson (two RBIs) and Crystian Brewer each went 2 for 4 to pace the top-seeded Colonels.