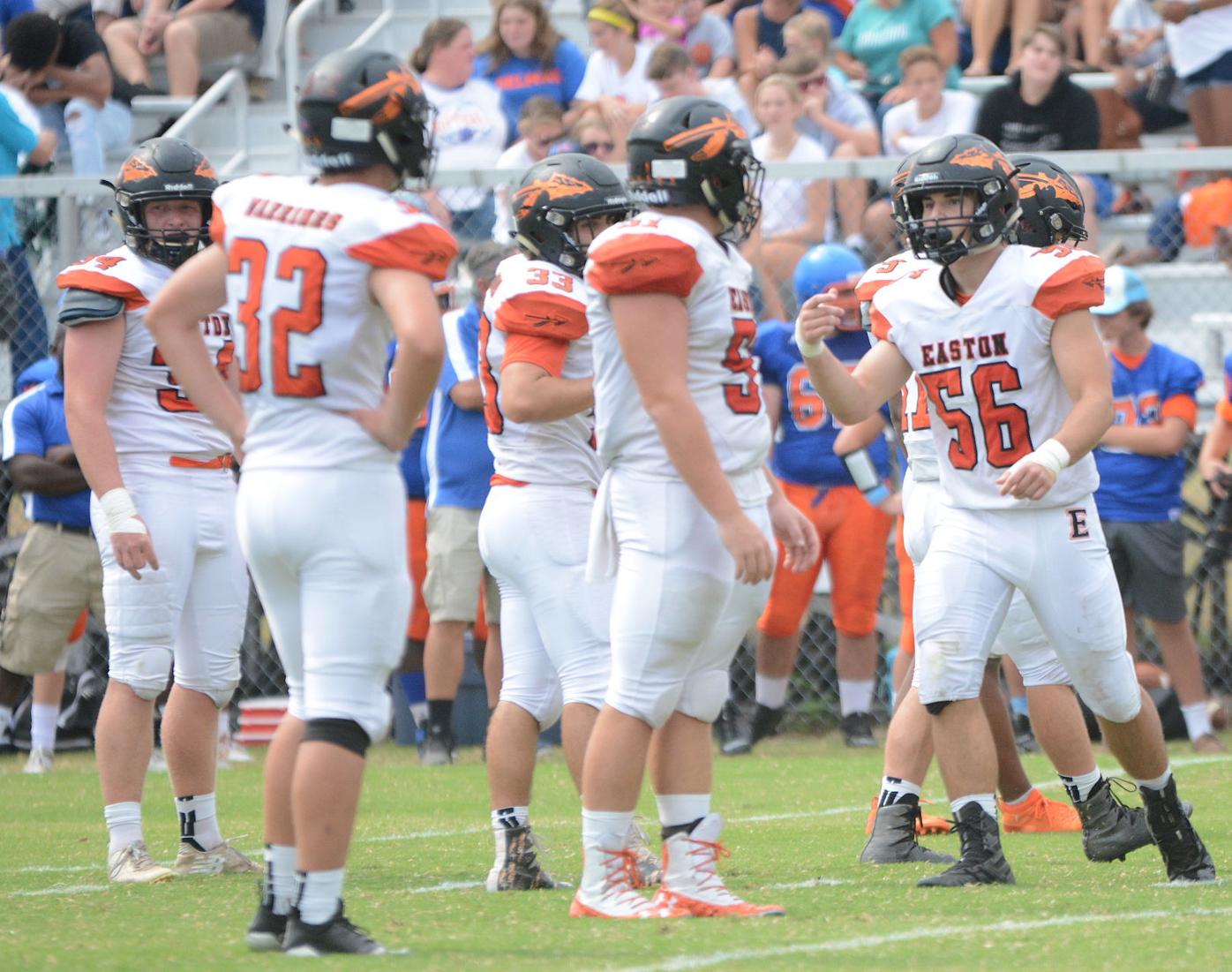 Easton High’s Noah Greene, 56, who made over 280 tackles over the past three years as a starting inside linebacker for the Warriors, hopes to find similar success at the Coast Guard Academy. 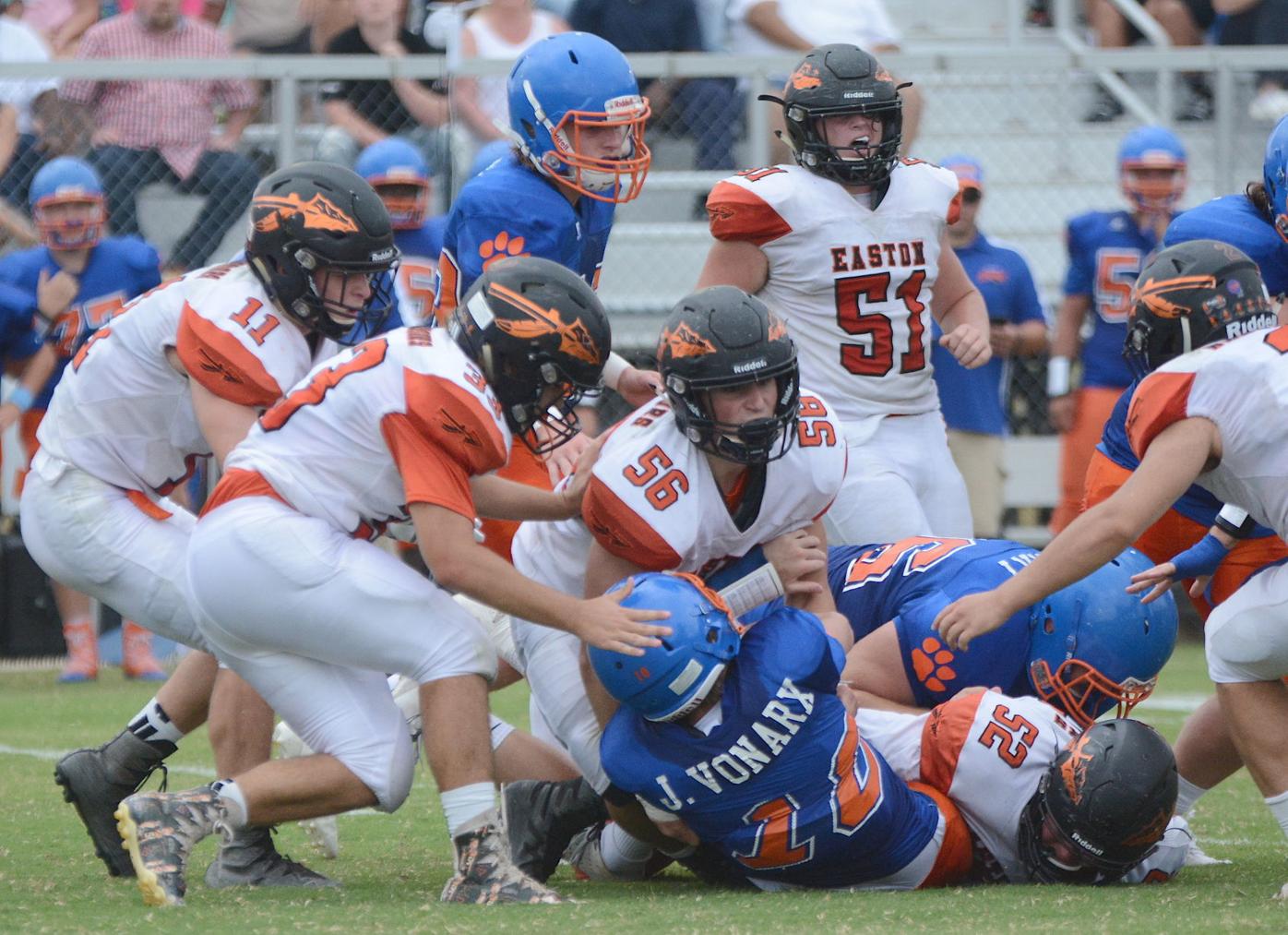 Easton High’s Noah Greene, 56, who made over 280 tackles over the past three years as a starting inside linebacker for the Warriors, hopes to find similar success at the Coast Guard Academy.

The funnel is large, then narrows. Really narrows.

The Coast Guard Academy received between 2,000 and 2,100 completed applications for its upcoming freshman class this year. Around 400 from that pool gained admission, though some declined their appointments for other service academies or schools, leaving this year’s incoming class in the neighborhood of 265.

From that group, only 20 cadets will join this year’s football team, including Easton High graduate Noah Greene.

“I wasn’t sure what I was going to do because I always thought Naval Academy or bust,” Greene said. “And then when the Coast Guard came through, it was crazy. It was the best of both worlds. I get to do both things that I wanted to do.

“I was always like, ‘Yeah, I wanted to play football at the next level, but I want to make sure that my education is good,’” Greene continued. “That (opportunity) presented itself, and I was like, ‘Wow, yeah I want to do this.’”

But to do it, Coast Guard recruits must get through a process that may be more demanding than the game itself.

“Recruiting at the Coast Guard Academy is very unique,” said Bears co-defensive coordinator Dana Fleischmann, who is entering his 21st season with the Division III program based in New London, Conn.

Applicants are required to complete a questionnaire their junior year, before reaching one of the early cuts in the process — can they play.

“Really the first breakdown we do, or first cut, is we watch the film and see if he can play football or not,” said Fleishmann, who also serves at the football team’s recruiting coordinator. “We saw him on film, saw him making plays. The scheme he was playing in high school really translated well to the scheme we like with our linebackers being counted on quite a bit.”

A three-year starter at inside linebacker for the Warriors, Greene recorded 80 tackles his sophomore season, and he bumped that number up over the next two seasons. He notched 100 tackles as a junior (seven for loss, three sacks, four fumble recoveries, one forced fumble) and racked up 102 last season (seven for loss, one pass deflection), helping the Warriors to a 6-4 record and a Class 2A East playoff berth.

“Then you look at the academics,” Fleischmann said. “And that’s actually a cut point for a lot of kids because while people are interested … They send us film, we like the film, but then academically if they’re not near the ballpark that we really need, we kind of have to let them go, so to speak.”

Greene’s grades were well in the ballpark, as he had an unweighted 3.9 grade-point average on a 4.0 scale (4.15 weighted) before his final transcript was released. He plans studying Naval architecture and marine engineering.

“So, in his case, he matched both criteria,” Fleischmann said.

The Coast Guard’s recruitment process continues with dialogue — often through email — another area where Fleischmann said the academy loses players.

“He was very responsive,” Fleischmann said of Greene. “Whereas a lot of kids ignore us and turn us off. In fact, a lot of kids, when you get into the whole nuts and bolts of the service academy, they’re like, ‘I don’t want anything to do with a service academy.’

“In the end our philosophy is to get as large a number of talented football players with good grades to apply,” Fleischmann continued. “And then we as a football staff support some of these applications in admissions.”

But Fleischmann also noted the academy tells recruits not to discount other schools of interest, and that there are no guarantees of entry. Greene attended junior days at Cornell and William & Mary. And family and friends knew the U.S. Naval Academy was always his dream destination, though he didn’t plan on playing football there. But when he learned the Coast Guard offered the opportunity to continue playing football and pursue the education he wanted, his search was done.

“But then the Coast Guard opened up as an opportunity and I realized that was kind of a dream branch for me because you stay on the coast and everything,” Greene continued. “And it’s not like I’m going to be in the middle of the ocean forever. So I was like, ‘Why not try to fly helos (helicopters) in the Coast Guard?’. And I just saw an opportunity there where I could get the best of both worlds, where I’m able to fly helicopters and play football. It was a great combination.”

Greene had another combination in his favor — his height, 5 feet, 11 inches, and his weight, 180 pounds.

“There are some height-weight standards,” Fleischmann said. “If he and his father showed up and he was 6-(foot)-2, 350 pounds he probably would have wasted his drive up there because from a physical standpoint he would not have made it.”

Greene’s height is right around the required standard for his position, while his weight must be around 190 pounds.

“He’s got that linebacker type of body that runs around and makes plays,” Fleischmann said. “He’s exactly what we’re trying to stack our team with. Not to mention on defense, those guys also translate into special teams and things like that.

“Again, when you show us on film that you’re athletic, have the ability to run, shed blockers and get in on tackles, you will fit into our scheme,” Fleischmann added. “You can sit there and say, ‘It’s only 185, 190 pounds.’ A lot of people say that’s too small, but that’s how we’re built. We’re going to be undersized for the most part. But we can always run.”

Greene, who along with his father, Mark, visited the academy in October, understood he could have always gone someplace else. That was until he got a phone call from Fleischmann in February.

“It was a pretty exciting moment to call him on the phone and say, ‘Hey, you have an appointment.’ And basically right over the phone he said, ‘Well, I’m taking it.’”

Because of the ongoing COVID-19 pandemic, Greene isn’t scheduled to be sworn in until early July. That delay hasn’t tempered his enthusiasm though.

“I was just really excited about the opportunity so I took it,” Greene said. “They recruited me for inside linebacker, but they do try kids at other positions too. This year they graduated a couple of inside linebackers so I feel I’ll still remain a linebacker. But maybe they’ll think I’ll fit somewhere else and I’m fine with that.”

Though Greene was a mainstay at inside backer the last three years for Easton, he got used to playing different positions on offense.

“He was basically a general on the football field on the defensive side,” Easton head coach Pat McGlinchey said of Greene. “The thing that mostly impressed me about him, he was always willing to step up and play kind of out of position on offense for us. Whereas he may have played tight end, or even possibly like a blocking fullback, we needed him to play offensive line really the last two years on varsity, and he did that. Junior year he really stepped up and played both sides of the ball. Last year we didn’t need him to play as much offensive line, but he was our backup center.

“I thought Noah was an incredible football player. He was the essential team leader that you want,” McGlinchey continued. “You want a kid, you know he wants to play another position, but he’s going to do what’s best for the team. And that was Noah.”