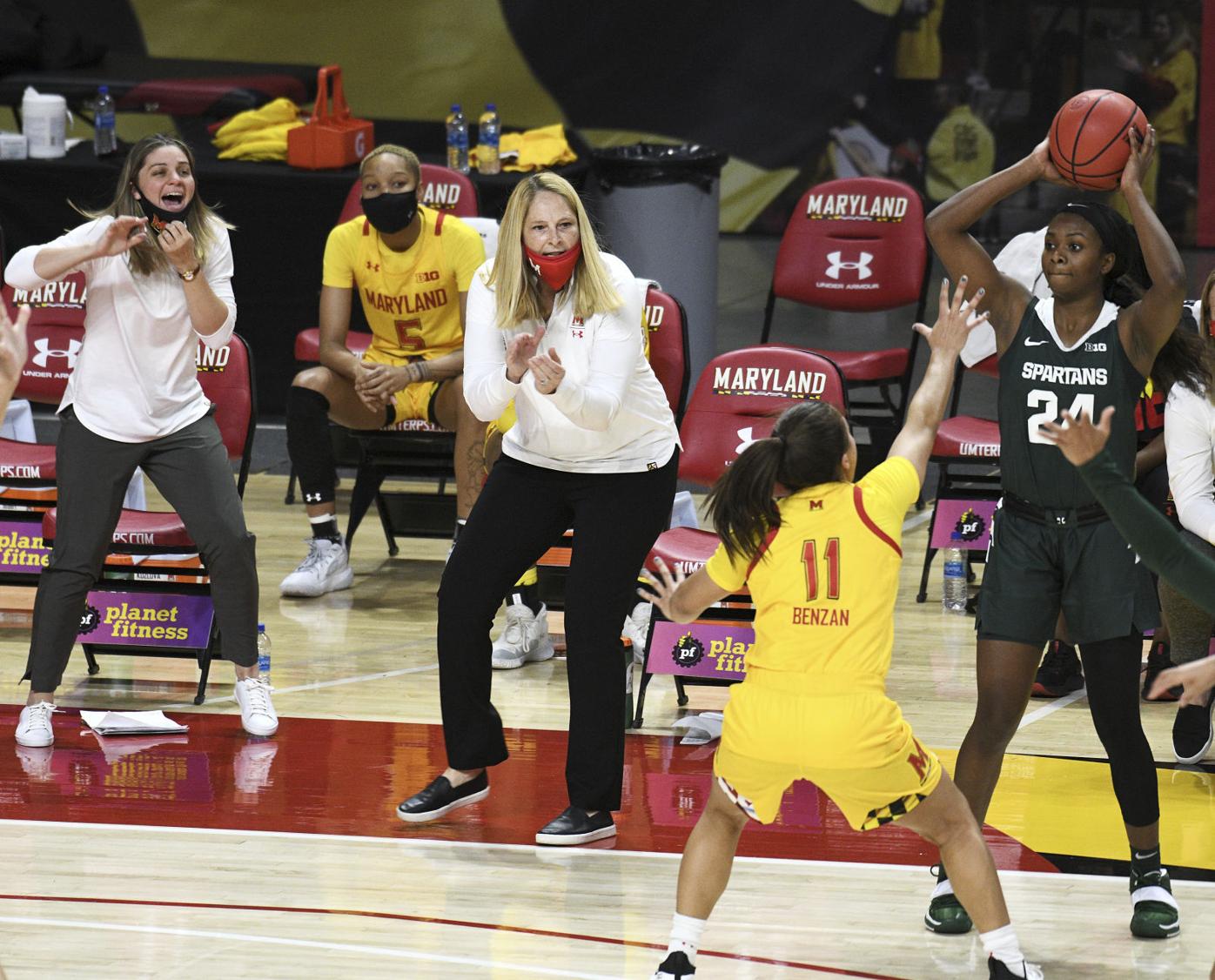 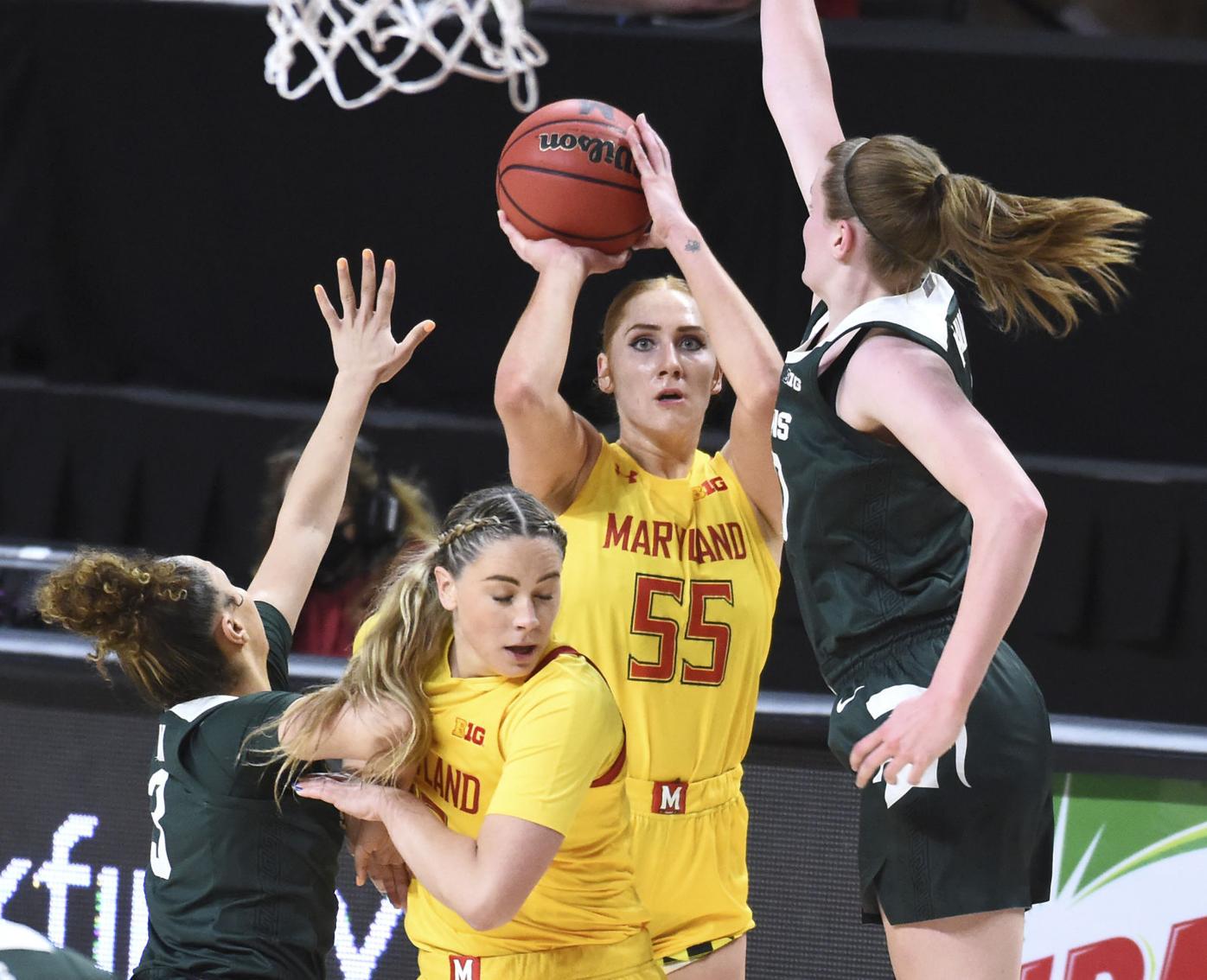 For now, her focus is on guiding the first-place Terrapins through another run to the Big Ten championship.

Diamond Miller and Ashley Owusu each scored 20 points, and No. 7 Maryland breezed past Michigan State 92-52 Thursday to provide Frese her 498th victory with the Terrapins.

Frese now stands within one win of matching the program record held by Hall of Fame coach Chris Weller, whom Frese replaced in 2002. Frese is 498-130 with the Terrapins and 555-160 overall, including two seasons at Ball State and one at Minnesota.

Breaking Weller’s record is a big deal for everyone associated with the team — except perhaps for Frese.

“I don’t think of that when you’re in this moment. I think I only know that because of all you guys,” Frese said. “I remember when I came to Maryland and Chris Weller had 499 wins and I was like, ‘My goodness. I can’t imagine coaching that long.’ And here I am.”

Maryland (12-2, 8-1) took control with a 17-0 run in the first quarter, led by 20 at halftime and coasted to the finish. Four players scored in double figures for the Terps, who bounced back in impressive fashion after having their 10-game winning streak snapped earlier in the week at Ohio State.

“I could tell we were locked in from the tip today,” Frese said. “Just loved the response. It continues to show the character in this locker room. You saw this team for 40 minutes. I thought it was one of our most dominating up to date.”

Earlier this month, Clouden scored 32 and Maryland escaped with a 93-87 victory. The rematch was decidedly different.

“To hold them to 52 points is quite an accomplishment,” Frese said.

The game was originally scheduled for Feb. 10, but was moved up after both teams had an opening due to postponements caused by COVID-19. Since Jan. 10, Michigan State has had three games postponed and played only twice.

The Spartans got off to a decent start before Maryland took over with a 17-point blitz that made it 20-7. Miller got things started with a 3-pointer and a layup before Chloe Bibby scored on a fast break, hit a 3 and sank two free throws.

Seven different Terrapins scored in a first quarter that ended with Maryland up 27-15. The outset of the second period was more of the same, with Bibby, Miller, Katie Benzan and Owusu each contributing to a 13-1 spree that increased the margin to 24.

It was 50-30 at halftime, and by that point the only suspense was whether the Terps would reach the 100-point mark for fourth time this season. Maryland came in as the highest-scoring team in the country (92 points per game).

The Terrapins made 14 3-pointers, their most since drilling 21 on Dec. 3 against Towson.

It was the perfect way to put the Ohio State loss behind them.

“We lost, so teams may underestimate us,” Owusu said. “But today was a statement win, that we’re still one of the best teams in the conference.”

The Spartans were without starting guard Tory Ozment, who tested positive for COVID-19. Ozment ranks second on the team in assists and averages 8.1 points per game.

The lopsided victory against one of the Big Ten’s better teams should enable Maryland to remain in the Top 10 despite Monday’s loss at Ohio State.

Michigan State: The Spartans can hold their own against most Big Ten teams, but not Maryland. They’re now 2-15 against the Terps.

Maryland: The Terrapins have scoring depth, play tight defense and crash the boards. The Big Ten keeps getting better, but so does first-place Maryland.

Michigan State: The Spartans are scheduled to face Indiana on the road Sunday.

Maryland: The Terps get a week off before taking on Wisconsin at home on Feb. 4.