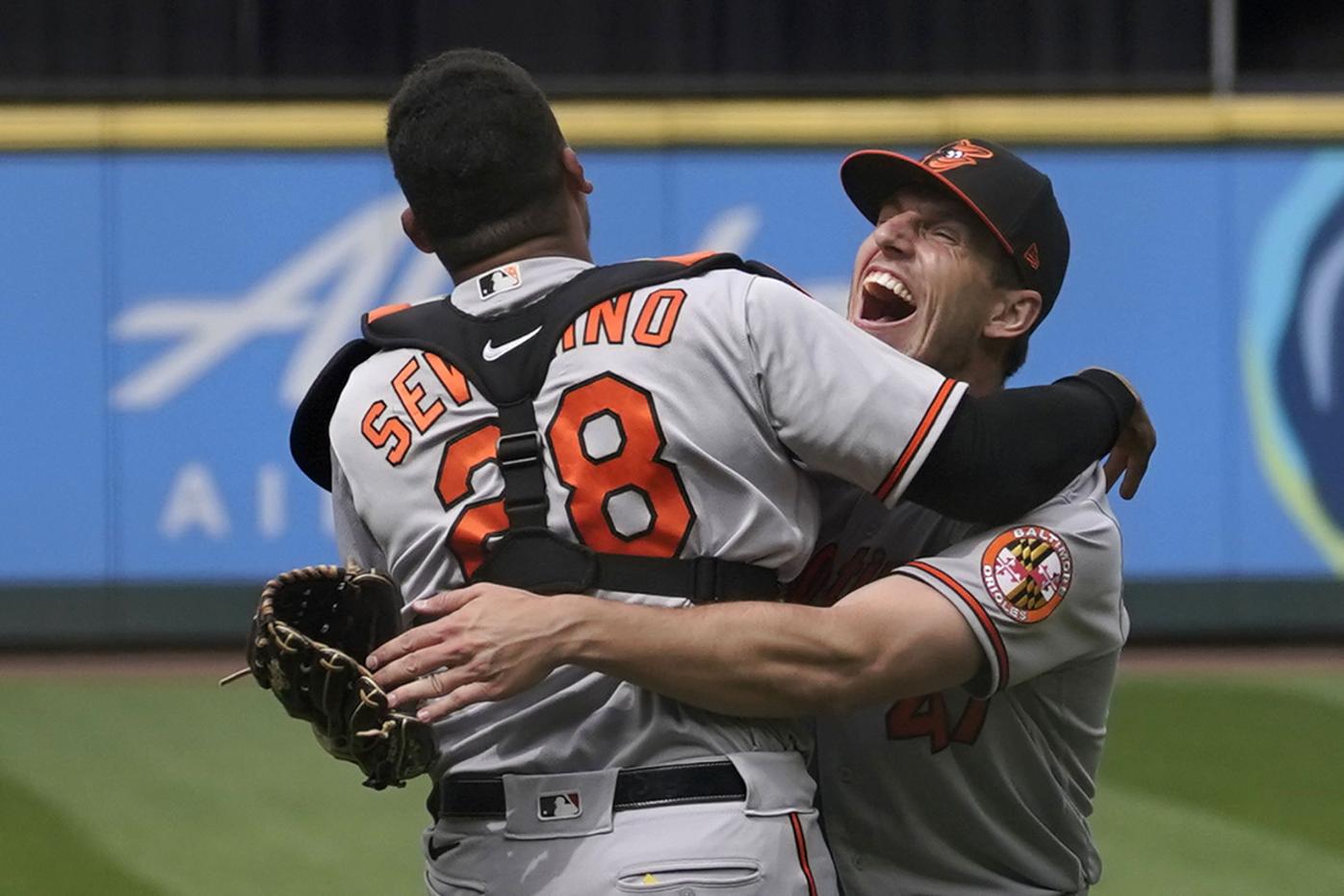 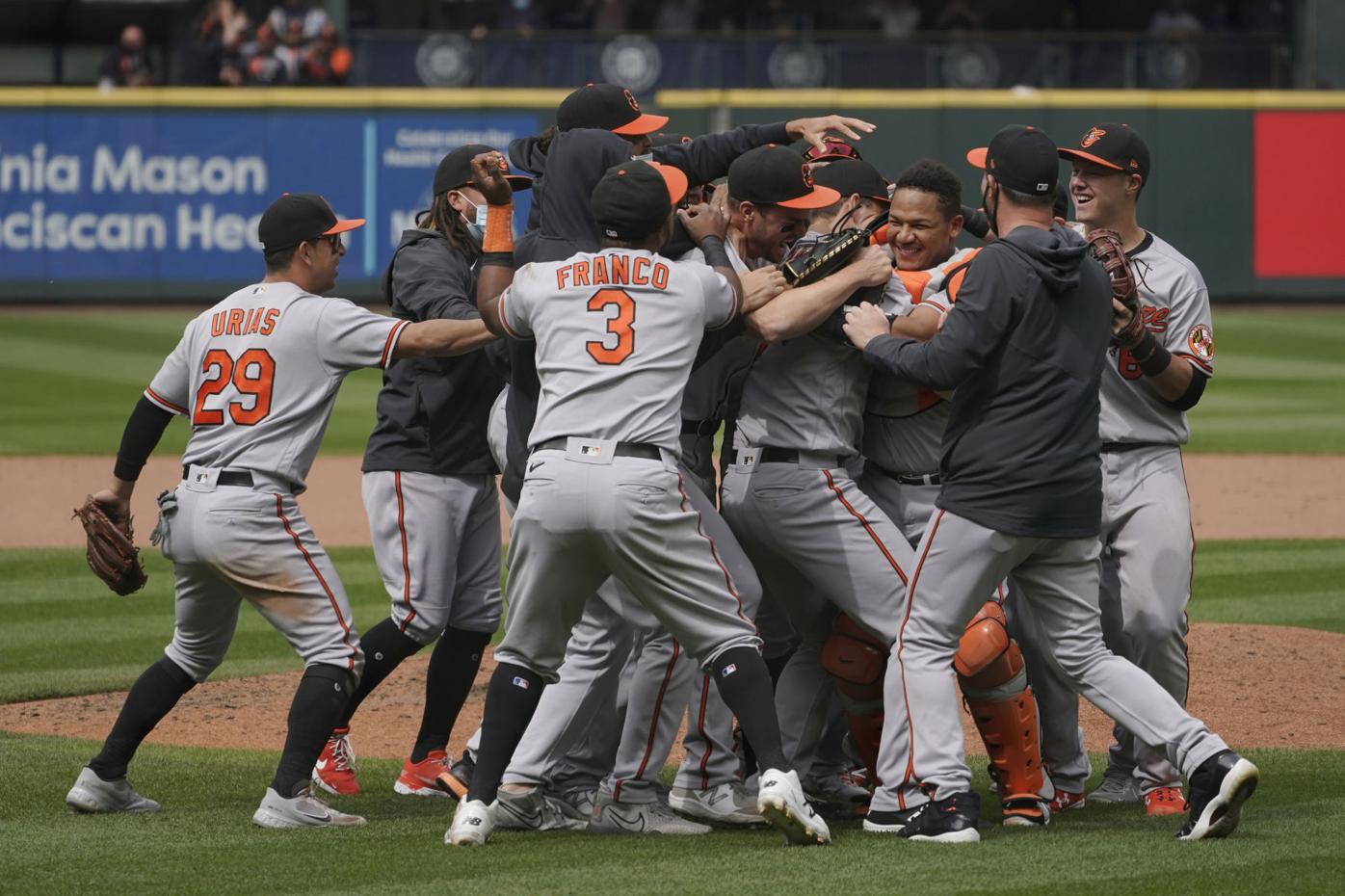 Orioles starting pitcher John Means is mobbed by teammates after he threw a no-hitter Wednesday against Seattle.

Orioles starting pitcher John Means is mobbed by teammates after he threw a no-hitter Wednesday against Seattle.

SEATTLE (AP) — The clubhouse celebration that awaited John Means was more than 50 years in the making for the Baltimore Orioles and more like a playoff berth being clinched rather than a Wednesday in May.

Only a wild pitch in the dirt kept the Orioles from celebration perfection. That’s how dominant Means was in throwing the major leagues’ third no-hitter of the season in Baltimore’s 6-0 win over the Seattle Mariners on Wednesday.

A franchise still in the midst of a rebuild and little to celebrate in recent seasons was happy to put the spotlight on its tall lefty who overmatched the Mariners with an array of unhittable fastballs, breaking pitches and a deadly changeup.

No, it wasn’t perfection. But it was about as close as it comes.

“I never really thought I’d be here. I’d always write MLB player when I was a kid on the on the sheet when asked you when you what you wanted to do when you’re older, but I never thought it was a reality,” Means said. “And now that it is, and now I’m able to throw this, it’s crazy and I don’t even know how to describe it.”

This wasn’t a fluke performance — Means has been one of the best pitchers in the American League to start this season. This was domination.

Means (4-0) struck out 12 and walked none. Seattle’s only baserunner was Sam Haggerty after he raced to first swinging on a curveball in the dirt for strike three with one outs in the third inning. The 1-2 pitch bounced away from catcher Pedro Severino and ended up being the only blemish that separated Means from a perfect game.

Haggerty wasn’t on base long, getting thrown out attempting to steal second.

Means pitched the first non-perfect no-hitter in which the opposing team did not reached on a walk, hit by pitch or error, according to the Elias Sports Bureau.

Means threw 79 strikes among 113 pitches, including first-pitch strikes to 26 of 27 batters. When Seattle did make contact against the 28-year-old left-hander, it was weak and there were no threats to fall in for a hit.

Means lowered his ERA to 1.37 and became the first individual Orioles pitcher to toss a no-hitter since Jim Palmer against Oakland on Aug. 13, 1969. It was the 10th no-hitter in franchise history, including six as Baltimore after four as the St. Louis Browns.

“It’s such a crazy feeling. It’s such a whirlwind of an experience. I don’t think I’ve been able to process it yet,” Means said. “But to be in the same breath as Palmer, I don’t think that it gets much better than that.”

In a season in which batters are on track to hit a record-low .234, Means joined a no-hit club that includes gems by San Diego right-hander Joe Musgrove at Texas on April 9 and by Chicago White Sox left-hander Carlos Rodón against Cleveland on April 14.

In addition, Arizona left-hander Madison Bumgarner pitched a seven-inning no-hitter against Atlanta on April 25, but that is not recognized as an official no-hitter by Major League Baseball because the game did not go at least nine innings, shortened under pandemic rules in effect for a second straight season.

It’s the first time since 1969 there have been three complete game no-hitters this early in the season.

“Really can’t put into words what the last three outs, seeing how the teammates embraced him,” Baltimore manager Brandon Hyde said. “Our your clubhouse after the game it was like we clinched a playoff spot.”

The closest Seattle came to a hit through six innings was J.P. Crawford’s short fly ball in the sixth that center fielder Cedric Mullins caught with a slide. Kyle Lewis provided a threat with a drive leading off the eighth that Austin Hays caught on the left-field warning track.

Means got a popout from Dylan Moore, struck out Haggerty swinging and induced a soft liner from Crawford to end it, setting off a wild celebration with his teammates on the mound and a standing ovation from the crowd.

“He was good. He was really good,” Seattle’s Kyle Seager said. “He was in control. I don’t think we had hardly any balls that were close to being hits.”

Means had never pitched beyond seven innings in a big league start.

“When I started the (ninth) I got a little bit of the Jell-O legs, just a little bit, started to kind of feel a little wobbly,” Means said. “But once I did get that first pitch I was able to lock in again.”

D.J. Stewart and Ramón Urias had third-inning RBI singles against Yusei Kikuchi. Pat Valaika hit a solo homer off Kikuchi (1-2) in the sixth and Trey Mancini provided a three-run shot off Aaron Fletcher in the eighth, Mancini’s sixth homer in a season that marked his return from colon cancer surgery.

“To watch our guys celebrate that’s a cool moment, because this is tough game,” Hyde said. “To watch one of your teammates, your brothers do something really special is pretty cool.”

Mariners: RHP Keynan Middleton was placed on the 10-day injured list due to a biceps strain but the initial belief is it will be a short stint on the IL. Middleton left his relief appearance in the ninth inning on Tuesday night after just four pitches. Manager Scott Servais said it appears not to be a significant injury and Middleton should be back after the 10 days.

Mariners: Seattle starts a five-game trip on Friday at Texas but has not announced a starter.

Votto was hit by Dallas Keuchel’s pitch in the fourth inning. Votto remained in the game, but in the sixth was replaced at first base by Kyle Farmer. Votto is not expected to need surgery, but could miss up to a month.

Jesse Winker hit a winning single in the 10th inning after Chicago’s Leury García was caught stealing in the top half.

Liam Hendriks (1-1) lost for the first time since signing a $54 million, four-year contract with the White Sox as a free agent. Lucas Sims (1-1) got the victory.

While the Mets received uplifting news earlier in the day when manager Luis Rojas said ace Jacob deGrom could return to the rotation on Sunday, skidding New York did little at the plate in its first game after hitting coach Chili Davis was fired and replaced by Hugh Quattlebaum.

Gray (4-2) allowed two runs and four hits. The right-hander struck out eight and walked two while improving to 4-0 in five home starts. Daniel Bard worked a shaky ninth for his third save.

Brandon Crawford continued his hot hitting against the Rockies with a two-run homer in the second inning. Crawford is 10 for 23 with four homers, six walks and 10 RBIs in eight games against Colorado this season.