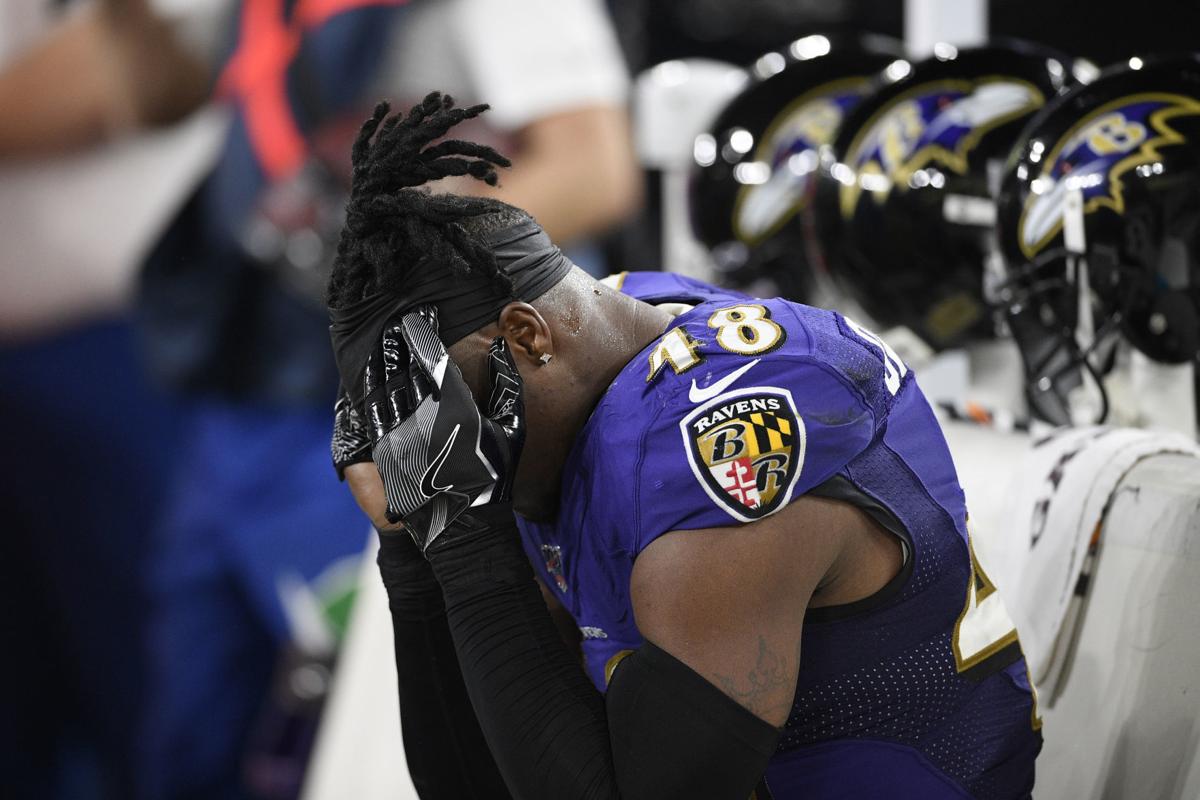 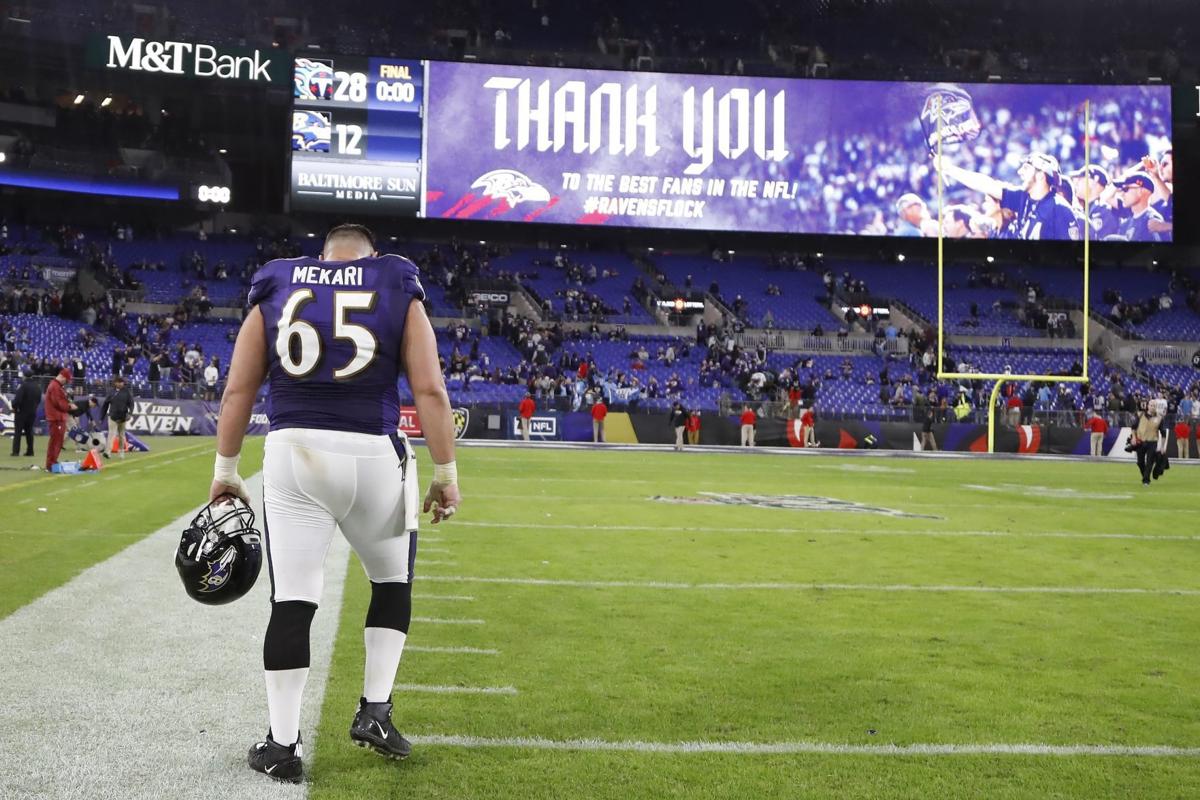 OWINGS MILLS (AP) — As top-seeded Baltimore approached its playoff opener last week, linebacker Josh Bynes was asked to compare the current edition of the Ravens to the Super Bowl champions of 2012.

Bynes, who played 10 games for the 2012 champs, replied, “That team is special, and this team is special. But we won a Super Bowl back then. We haven’t won anything yet. We’re having a great season, but if you don’t win it all, what does it matter?”

The 2019 Ravens went 14-2, the best regular season in franchise history, earned a No. 1 seed for the first time, and received a record-breaking performance from second-year quarterback Lamar Jackson. They had 12 players picked to the Pro Bowl, tying a record, and five All-Pros.

All of that is noteworthy, but those associated with this team will always remember the one-and-done outing in the playoffs.

Less than 24 hours after a 28-12 loss to Tennessee on Saturday night, Bynes and his teammates began an offseason that arrived far sooner than expected by somberly clearing out their lockers. After winning 12 straight to finish with the best record in the NFL, the Ravens’ first loss since late September sent them packing for home.

“This game is going to be the one that we’ll remember because it’s the last one,” coach John Harbaugh said. “I told them, in the end, there’s only one team that gets to be the one true champion — and that’s not going to be us this year.”

Jackson set an NFL record for yards rushing by a quarterback (1,206) and led an offense that compiled more yards on the ground (3,296) than any in league history. He’s got a great shot at being NFL MVP, but Jackson won’t be taking home a Super Bowl ring. Although he accounted for more than 500 yards in offense against the Titans, Jackson committed three turnovers and was twice stuffed on fourth-and-1 runs.

Regardless of how the Ravens fared in the postseason, the roster will change before the team returns for training camp in July.

Sacks leader Matthew Judon, defensive tackle Michael Pierce and cornerback Jimmy Smith are among the notable unrestricted free agents. Most would prefer to return if the Ravens are willing to pay to retain them.

“This is the only family I’ve known,” said Pierce, who’s played four years with Baltimore. “I would love to stay and be a part of this amazing group.”

Also, eight-time Pro Bowl guard Marshal Yanda turns 36 in September and will decide in the months ahead if he’s up for a 14th NFL season.

Jackson was a far better quarterback this year than last, and if he continues to improve the Baltimore offense could be even better in 2020.

In addition to finishing sixth in the league in rushing, Jackson threw for 3,127 yards and 36 touchdowns with only six interceptions. But he was picked off twice and lost a fumble against Tennessee.

“I need to improve on everything,” Jackson said, “whether it’s running, throwing the ball, pocket poise, everything.”

The addition of cornerback Marcus Peters during the season shored up a solid secondary that includes safety Earl Thomas and cornerbacks Marlon Humphrey and Brandon Carr.

Peters was locked up with an extension, which leaves general manager Eric DeCosta with one less free agent to sign.

“Man, it just feels good to be around this place,” Peters said. “The workplace was a fun atmosphere; everybody came to work. We fell short on our goal, but I believe in this team a lot.”

Jackson had plenty of options when passing the ball, although he usually homed in on tight end Mark Andrews, who led the team in receptions, yards receiving and touchdown catches.

Rookie Marquise Brown shined against the Titans and ranked second during the regular season with 46 catches, but he had eight games with three receptions or fewer.

Willie Snead had 31 catches, half his total in 2018. He received a one-year extension in October, so the Ravens evidently have plans to make him more of a factor.

HOW TO GET IT RIGHT

It’s tough to find a whole lot of flaws in a team that went 14-2, but the loss to Tennessee exposed some issues that must be addressed.

Though Baltimore was ranked fifth against the run, Derrick Henry rambled for 195 yards. Pierce and Brandon Williams are solid in the middle of the line, but they need capable backups.

The Ravens also need more production at middle linebacker. The loss of C.J. Mosley during the 2019 offseason proved hard to overcome, as pending free agent Patrick Onwuasor, Bynes and L.J. Fort did not adequately fill the void.

Putting pressure on the quarterback is a concern, especially if Judon heads elsewhere. Baltimore ranked 21st with 37 sacks, including 9 1/2 by Judon, five by Tyus Bowser and no more than three by anyone else.

Offensively, the Ravens ranked 27th in passing, a stat that can attributed greatly to their propensity to run. But as proven against the Titans, playing from behind is not a strength of this team. Baltimore must improve this aspect of its attack before the 2020 season.